Polyvinyl alcohol is unique among polymers. Apart from its preparation, it is not built up in polymerization reactions from monomers, unlike most vinyl-polymers, and it is biodegradable in the presence of suitably acclimated microorganisms.

The unique and easily adaptable properties of polymers and polymer-composites open up possibilities for using these materials in an indefinite number of applications. Among various special features, the easy processing techniques and optical properties of novel compound polymers, makes them reliable candidates for various optoelectronic applications, in integrated optics, optical sensors, microlasers, nanophotonics, optical communication, and data processing [1][2][3][4][5].
The best known water-soluble polymer used for various optoelectronic devices and applications that is environmentally friendly and cost effective is definitely polyvinyl alcohol (PVA) [6][7][8], which is also one of the most important polymers used in the industry. With very good optical properties, PVA is a semicrystalline polymer, with high dielectric strength, high transparency and excellent physical properties [8]. Even if the best low light-scattering-loss polymer glasses (with the lowest refractive index, n = 1.3–1.4) for high transmission rate are amorphous polymers (perfluoropolymer-0.3 dB/km, at 1.3 μm, comparable with silica fiber) [9], PVA has been extensively analyzed due to its large number of possible applications relating to its chemical versatility [10] and its high optical characteristics.
Among the many potential applications of doped PVA in high-tech photonics, we can list: highly diffractively efficient plates for holography or real time holography [11][12]; biocompatible microlasers (dye-doped PVA) based on polyvinyl alcohol microspheres [13]; white laser emission where the active material is composed of a solid polyvinyl alcohol matrix with a phase-separated liquid crystalline mixture [14]; LEDs, electroluminescence boards and plasma devices [15]; linear film polarizers in VIS domain (PVA sheets that are stretched and then dyed with iodine during the manufacturing process [16]), used in LCD displays or projection systems, and possibly even in UV domain [17]; wide-scale UV–VIS laser cut-off filters [18]; and so on.
Metals form an enormous number of inorganic compounds, and many of them are able to become a potential dopant/filler for polymers, including PVA in this case, at least for the purposes of scientific research on the properties of the resultant compounds. A simple and eloquent proof of interest in these types of composites is the graph of the annual number of publications about “metals doped PVA”, see Figure 1. This review is not intended to be exhaustive, but to outline some of the directions in which research is heading. 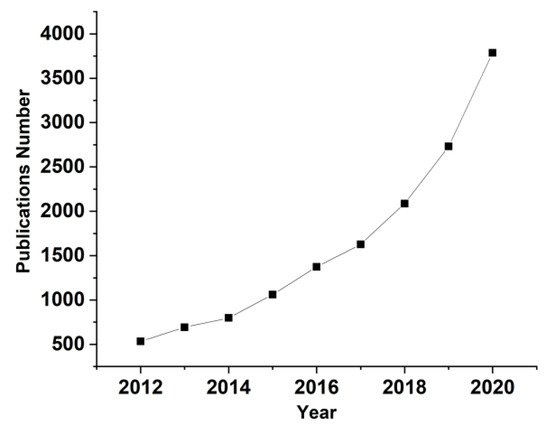 Figure 1. Annual number of publications about “Metals doped PVA” over the last decade in the fields of physical and chemical sciences (source of information: ReadCube- www.readcube.com, accessed on 30 March 2016).

PVA is a water-soluble polymer represented by the formula (C2H4O)n, see Figure 2, and is produced by the saponification of poly(vinyl ester) using sodium hydroxide (NaOH) [19], or by hydroxylation of polyvinyl acetate (PVAc). The vinyl alcohol (not used as the polymerization starting material because it is unstable and cannot be isolated) is hydrolyzed in methanol, ethanol, or a mixture of alcohol and methyl acetate, using alkalis or mineral acids as catalysts [20]. The resulting reaction removes the acetate groups from the PVAc molecules without breaking their long-chain structure, and when the reaction is complete the result is highly soluble in water and insoluble in practically all organic solvents (incomplete removal results in less solubility in water and more solubility in certain organic liquids) [21]. PVA occurs as an odorless, white-/cream-colored granular powder, with a commercially available degree of polymerization between 500 and 5000 (the number of monomeric units in a macromolecule equivalent to a molecular weight range of 20,000–200,000) [22]. PVA density is 1.19–1.31 gm/cm3; it has a melting point of 230 °C and decomposes rapidly above 200 °C as it can undergo pyrolysis at high temperatures [23]. The basic properties of PVA depend upon the degree of polymerization and the distribution of hydroxyl groups, as well as stereoregularity and crystallinity [24]. 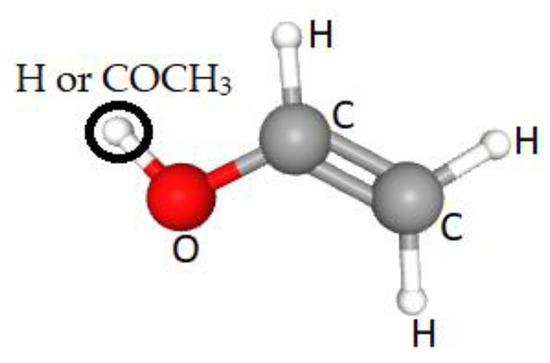 Figure 2. The PVA partially hydrolyzed monomeric structure (where O = H or COCH3).
PVA is an atactic polymer (most atactic polymers do not crystallize, remaining in their amorphous state due to the absence of chain regularity) that can crystallize because its OH-groups are sufficiently small to not disturb the crystal lattice, and it has good optical transparency [25]. The refractive index of the PVA matrix is situated in the medium domain for polymers, n = 1.48–1.50 in the visible spectral range [26], and it has a high transparency, starting from approx. 40% at 200 nm (greater than 95% over 350 nm), and reaching almost 100% over 500 nm [27]. The refractive index of PVA is very useful in optics and photonics due to its ability to increase light output while reducing reflection loss.

PVA is a polymer with a wide variety of applications, used mainly as a component of adhesives and emulsifiers, as a water-soluble protective film, and as a starting material for the preparation of other resins [28] or polymeric nanoparticles. These can be obtained from most polymers in combination with PVA and Water-in-Oil-in-Water (W/O/W) by the emulsification solvent evaporation method, when, in most cases, poly(vinyl alcohol) is used as stabilizer of the emulsion [29].
Due to its ability to retain water (almost equal to that of natural cells) and its biocompatible, biodegradable, and nontoxic properties, it is one of the oldest and most extensively used synthetic polymer hydrogels, having several advanced biomedical applications such as wound management, organ drug delivery, artificial organs, and contact lenses [30][31]. The tensile potency of PVA resembles to that of human articular cartilage, its hydrophilicity and chemical stability allowing it to withstand extreme pHs and ambient temperatures, while its semicrystalline structure permits efficient oxygen and nutrients passage to cell [32].
In medicine and pharmacology, PVA fibers and films are used because of their ability to swell and absorb toxic products, decompose necrotic masses, and reduce blood loss [33]. They can be also used for coating SPIONs, and for the fabrication and development of magnetic particles for gene therapy [34]. It is shown that solutions containing up to 5% PVA are nontoxic to fish [35].
PVA, with its carbon–carbon backbone, being water soluble but not liable to hydrolysis [36], requires an oxidation process for its biodegradation and can be biodegraded by microorganisms in addition to enzymes through an oxidation or photo-oxidation process, under both aerobic and anaerobic conditions [37].
Many functional groups within the backbone enable PVA to be polar, and form hydrogen bonds that facilitate polymer-blend formation [38]. Morever, the hydrophilic character and the high density of reactive chemical functional groups helps PVA to be able to cross-link with dopant chemical materials [39].
Even if it is mostly used in food, medicine and cosmetics, PVA has proven to have numerous other applications, such as high quality thin film deposition, integrated optics and photographic films manufacture [40]. PVA is well known for its high dielectric strength compounds [41], thermal and chemical stability, and dopant-dependent physical properties [42].

PVA is a hydrophilic polymer with excellent film forming properties as well as good processability and mechanical strength for film/membrane fabrication, but the major disadvantage of PVA based film for opto-electronic applications is its higher water absorption. To prevent such a problem, a possible solution is coating PVA film with protective layers to eliminate water absorption from the environment when no direct air/polymer interface is required; for example, triacetyl cellulose (TAC) film is used as a protective PVA based polarization layer in liquid crystal display (LCD) [43]. Other studies have reduced intrinsic polymer hydrophilicity. Using thermal crosslinking and adding different additives, an optimistic conclusion has been reached, namely that PVA has great potential for use in the synthesis of composites/films, as underlined in [44]. Table 1 shows the effects of PVA film treatments on the optical and mechanical properties of the final compound.
Table 1. Effects of PVA film treatments on optical and mechanical properties.
PVA thermally degrades at temperatures just exceeding 200 °C, at which temperature it often sees the onset of melting and crystallizes from the melt so rapidly that 100% amorphous samples cannot be obtained. In [59] it is shown from the heat capacity increment curve vs. mass fraction crystallinity (well fitted by the two-phase model comprising crystalline and mobile amorphous phases) that there is no evidence for the existence of a third phase, namely a rigid amorphous phase. In semicrystalline polymers (with two phases) crystalline and amorphous regions have no sharp boundary, allowing one macromolecule to run across the two regions. We can treat the PVA polymer as a crystalline lattice with voids filled by amorphous matter [60].
In general, PVA films with no special treatments have a degree of crystallization of approx. 30–40% [48], which can be increased gradually only by annealing the films, to 60% (at a maximum of 150 °C, where, most likely, one sees the chemical destruction of the polymer, the hydroxyls are lost, and polyene and other chemical structures are formed [45]). When adding different dopants, like 0.1 mol/L lithium chloride, the crystallization is reduced to 18% [45], or with chitosan (to 15%), and with supplementary glycerol down to 1% [48].
A highly crystallized molecular structure of final PVA films generates a polymer with low mechanical strength and water resistance performance [46]. Pure PVA is semi-crystalline, and the degree of crystallinity can be controlled by the film/gel method, by polymer blend with a plasticizer (resins, rubber and elastomers) [48][61][62], or even by dopant insertion. For example, the lower crystallinity of the PVA films with the addition of various conductive ions may be due to the strong interaction among the polymer molecules and conductive ions, as with Ni2+ [47], or ferric ions Fe3+, when the crystallinity of PVA is reduced from 41.6 to 7.7% with the addition of 2.0% ions [46].
The presence of acetate groups affects the ability of PVA to crystallize upon heat treatment [63], which is of particular interest for crosslinked hydrogels. The crystalline degree of PVA can be improved by repeated cycles of freezing and thawing, and by gamma ray irradiation [56]. An alternative method to control crystallinity is the use of derivate polymers, such as acrylamide (a carcinogenic compound) modified PVA, prepared by the alcoholysis of vinyl acetate and acrylamide copolymers. This enhances the water solubility and tunes the tacticity (with effects on the physical properties of the polymer) and crystallinity [64].
It is known that aqueous solutions of PVA gradually undergo gelation upon standing at room temperature (from the formation of networks in which the PVA crystallites generated by spinodal decomposition serve as the junction points) [65]. For gel formation through freezing/thawing methods, as the number of cycles is increased, the number and stability of crystallites also increases (due to the condensation of the PVA solution by the formation of ice) [66]. Low-temperature crystallization is the most popular method used to prepare PVA gel, with excellent mechanical properties, but it uses toxic dimethylsulfoxide (DMSO) as a solvent [67]. A simpler and more eco-friendly method for preparing transparent PVA hydrogel with an enhanced crystallinity, with water as the only solvent, uses swollen PVA placed into a hot-pressing machine (95 °C), pressed from 2 to 20 MPa (in successive steps from 2 to 15 min), and kept at room temperature without drying for one week (for gelation) followed by drying in air for two days, followed by vacuum drying for 2 days. The gel thus prepared shows a decrease in net crystal size and good mechanical properties [68].
Other methods to improve the specific properties of PVA for different applications involve blending it with other polymers: with poly(vinylpyrrolidone) PVP [49][50][69] for increased thermal, electrical, mechanical stability and electrochemical properties; with polyethylene glycol (PEG) for facilitated gas transport [70], with PVAm in order to improve film formation and mechanical properties; reinforcing it with carbon nanotubes [52] or with poly(glucosyloxyethyl methacrylate) (poly(GEMA)) for the suppression of the thermal decomposition of PVA in an aqueous solution, and to increase the thermal decomposition temperature above 300 °C [51].