Schistosomiasis affects mankind in 76 countries causing an estimated annual mortality rate of 280,000, 779 million people at risk of infection, 250 million people with active infections, and 440 million people with residual morbidity [1][2][3][4]. The disease burden is largest throughout sub-Saharan Africa accounting for >90% caused by the clinically most relevant human-pathogenic species Schistosoma mansoni (Sm) and S. haematobium (Sh) [1][2][3][4]. Though schistosomiasis is likely underrecognized among the veterinary sector, inclusive of livestock and wildlife animals, it is assumed that in particular ruminants, rodents and non-human primates are carriers of zoonotic species [5].

The causal agents of this neglected tropical disease are dioecious digenean schistosomes within the Platyhelminthes; species by clade of the Schistosoma genus including their geographical distribution, and intermediate and definitive hosts are illustrated in Figure 1 [5][6][7][8]. 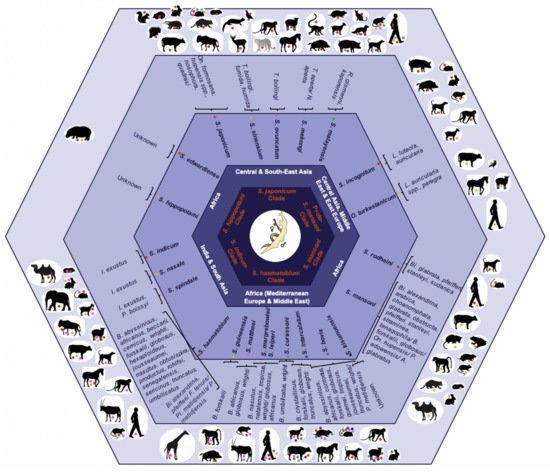 Figure 1. Clades within the Schistosoma genus inclusive of their geographical distribution, Schistosoma species, and species-specific intermediate invertebrate and definitive experimental and natural mammalian hosts ordered from the inside to the outside of the hexagon. Notes: S. = Schistosoma, O. = Orientobilharzia; On. = Oncomelania, T. = Tricula, N. = Neotricula, R. = Robertsiella, I = Indoplanorbis, P. = Planorbis, L. = Lymnaea, Bi. = Biomphalaria, B. = Bulinus, A. = Australorbis, Pl. = Planorbarius, F. = Ferrissia; adapted from Leger et al. [5], Lawton et al. [6], Webster et al. [7], and Pearce et al. [9]; species-specific intermediate and definitive hosts retrieved from the host-parasite database of the Natural History Museum [8].
The chemotherapeutic at present is the acylated quinoline-pyrazine known as praziquantel (PZQ) that acts against adult schistosomes though poorly against immature schistosome larva by changing irreversibly the permeability and stability of tegumental membranes and needs established host immune defense mechanisms for full efficacy [2][3][10].
Preventive measures are multifaceted, but need to be complemented by vaccination to achieve long-term protection against transmission, infection, and disease recurrence as acquired naturally in endemic settings [1][11]. The goal is a non-sterilizing immunity with long-term decline in tissue eggs and egg excretion preferably through killing of female worms while preserving concomitant natural immunity induced by less-pathogenic single male worms [12][13].
Parasite hybridization is an emerging public health concern and may be linked to global natural and anthropogenic changes causing selection pressure; this in turn impacts the dynamics and distribution of schistosomes and their hosts by breaking isolation barriers, thus increases chances of introgressive hybridization [2][14][15][16][17].
Schistosomes are known to hybridize and natural hybrids are more and more frequently found disorienting baseline laboratory and clinical diagnoses; see Figure 2 for likely natural schistosomal hybridization events across Africa [18]. 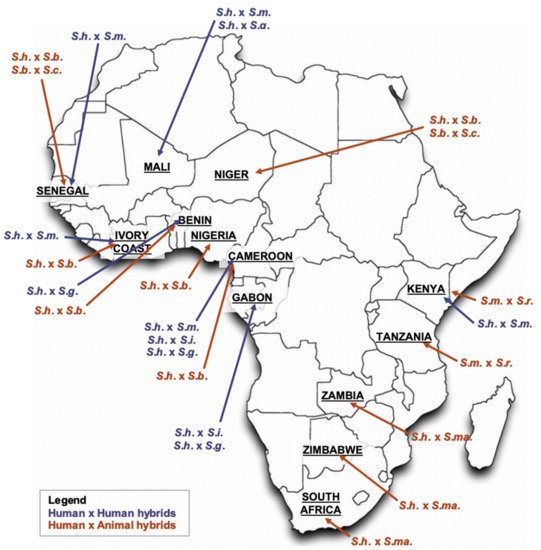 Interactions between Sh and Sg are reported from South-West Cameroon; of note is the re-description of S. intercalatum (Si) from Lower Guinea, e.g., Cameroon, Gabon, Equatorial Guinea and São Tomé, as Sg [22][23][28][29][30]. Ecological changes such as forest clearance and agricultural development evolving in the 1960s besides population movement favored the presence of snail hosts, e.g., Bulinus wrighti, B. forskalii and B. truncatus, and species sympatry and interplay; this materialized the complete replacement of Sg by Sh within 25–30 years through introgressive hybridization and competitive extinction abetted by behavioral, reproductive and genetic advantages [31][32][33]. Experiments confirmed greater competitiveness and pairing abilities of ShxSg crosses over parental species, and Sh being dominant over Sg, which supports observations made in Cameroon and elsewhere, e.g., Kinshasa, Democratic Republic of Congo, and Dogon Country, Mali [34][35][36][37]. Retrospective experiments among schistosomes of laboratory maintained urinary ova of Cameroonian children detected hybridization between Sh and Sg among 100%, 33% and 5% isolates from Kumba, Loum (1990), and Loum (1999 and 2000), respectively; the remainder had pure Sh, but no Sg despite established B. forskalii hosts [28]. Findings were confirmed by four-banded single-stranded conformational polymorphism (SSCP) profiles of second nuclear ribosomal internal transcribed spacer (ITS2) fragments. Sequencing isolates from Loum revealed unequivocal intermediate SNPs at the positions 25, 80 and 130 within ITS2 fragments compared to parental strains, i.e., guanine-cytosine-guanine for Sh, and adenine-thymine-adenine for Sg, clearly demonstrating ShxSg recombinants with dominance, thus inheritance, of Sh over Sg [23].

ShxSb hybrids are certainly the most widespread and best studied schistosome hybrids in West African countries. The presence of these hybrids was first discovered in 2009 in the Senegal River Basin (SRB) [16] and attributed to contemporary ecological and anthropogenic changes having affected the SRB since the 1980s. It was pointed out the construction of the Diama Dam on the Senegal River for sea water desalination and expanded irrigation and agriculture, and the Manantali Dam on the Bafing River for hydroelectricity and alterations in water velocity; Biomphalaria pfeifferi and Bulinus spp. hosts of Sm, Sh and Sb got established due to more favorable habitats triggering increases in urogenital and intestinal schistosomiasis in both, humans and livestock, intensified by growing contacts between humans and companion, domestic/livestock and wildlife animals [16][37][38][39][40][41]. These changes have certainly favored the propagation of ShxSb hybrids in the SRB, though recent genome-based studies did show that hybridization events are much older than presumed. Based on parasites recovered from Niger, it has been estimated that introgression occurred around 240.6 years ago (range: −107.8 to −612.5 years) [42]. The ancestral origin of these hybrids was confirmed with parasites originating from several settings across Western Africa [19].
In Senegal, numerous studies have been performed on ShxSb hybrids following their initial discovery. Investigations on miracidia hatched from urinary and fecal ova of Senegalese schoolchildren from six villages in the SRB adjunct to Senegal River, Lampsar River, and Lac de Guier revealed 15% ShxSb isolates with Sh-ITSxSb-COX1 profiles producing viable offspring; patterns were confirmed by double chromatographic peaks at polymorphic positions of ITS and sequence divergence of COX1 with alignment to Sh and Sb strains from Guede Chantier and St. Louis, Senegal, respectively [16][43][44]. Recombinants evolved from crossing of male Sh with female Sb were capable of infecting humans and both B. globosus and B. truncatus snails indicating loss of host specificity [16]. The reverse, more rare recombinant seems less viable due to biased homogenization towards parental species, asymmetric backcrossing, or concerted evolution. Restriction fragment length polymorphism (RFLP) was applied to COX1 and ITS amplicons of miracidia hatched from urinary and fecal ova of children and adolescents in Pakh, Northern Senegal, and 10 villages of the SRB, followed by back-crossing of fertile hybrid progeny with parental species [43][44].
Recent investigations in Côte d’Ivoire identified ShxSb hybrids in both, molluscs and humans [45][46]. Sequences of miracidia collected from schoolchildren at Sh and Sm endemic sites in the south of the country, i.e., Agboville, Adzopé, Sikensi and Duekoué, uncovered 35% pure Sh, and very few pure Sb suggesting zoonotic transmission similar to reports from Corsica [45][46].
Ongoing disease surveillance among children residing in Chickhawa, Nsanje and Mangochi Districts of Malawi, lacking reported evidence of Sb, found primarily pure Sh ova and few eggs with discordant Sh-ITSxSb-COX1 schemes [37][47][48][49][50][51].

Even before Boon et al. reported miracidial ShxSm-COX1 and ShxSm-ITS patterns, interbreeding between phylogenetic distant Sh and Sm was observed among miracidia collected from schoolchildren in the SRB, Senegal; based on microsatellite DNA amplification, 36% urinary and 2% fecal isolates presented with the hybridale allele profiles 218:239 or 218:236, respectively, whereby allele 218 is specific to Senegalese Sh, Sb and their hybrids, and allele 239 is specific to Senegalese Sm [52]. RFLP applied on COX1 and ITS amplicons of miracidia and ova detected heterozygote Sm-COX1xSmxSh-ITS and Sh-COX1xSmxSh-ITS schemes. Similar to observations made for ShxSb crossbreeds in this setting, a potential zoonotic role of livestock and/or rodents, the latter being capable of serving as host for Sb and ShxSb crossbreeds but not Sh, as seen in the SRB is suspected.

Extensive small-scale gene amplifications and alterations are contributing to a steady schistosomal genomic evolution [27]. SNPs emerging through transversional/transitional or synonymous/non-synonymous nucleotide substitutions leading to e.g., alternative splicing or silent mutations are of high importance in particular among sequences serving as drug or vaccine targets; they may lead to structural and functional protein alterations impacting charge changes and residue conservation affecting drug binding sites or antibody recognition of antigenic epitopes [55][56][57]. Hosts react in the following general manners against schistosomal infections, i.e., development of age-dependent partial protective immunity to reinfection from repeated adult worm death, and initiation of immunopathogenic and/or immunoregulatory mechanisms against parasitic antigens released from eggs trapped in tissues [58][59][60].

Preliminary findings of the phase 2a trial confirmed rSm14+GLA-SE’s safety and strong, long-lasting immunogenicity, and reported 92% seroconversion following the second dose with cellular responses, memory cells and T-cell activation makers [61]. However, Sm14 isoforms demonstrate the potential of structural instability resulting in its aggregation and precipitation and, in turn, to uncertain immunoprotection and functional alterations [57][62].

rSh28GST+Alhydrogel/Bilhvax® vaccine candidate was tested in a phase 3 safety, efficacy, disease recurrence and immunogenicity trial among Sh infected schoolchildren from the ShxSb and ShxSm hybrid endemic SRB receiving two-dose PZQ pre-treatment, three-dose immunization, and a single-dose PZQ treatment prior to a final vaccine booster dose [63][64][65][66]. rSh28GST+Alhydrogel proved its safety, strong, long-lasting immunogenicity, and anti-worm fecundity with inhibited egg viability despite the fact that the primary endpoint of significant delay in schistosomiasis recurrence was not reached in the trial [63].

Of interest related to the ShxSm hybrid type could be the potential of the Smp80-GLA-SE/SchistoShield® vaccine candidate to confer robust, balanced Th1/Th2 cross-species prophylactic and therapeutic protection against Sh in addition to Sj as demonstrated in rodents and baboons [67][68]. This observation could be due to 95% and 84% amino acid homology among calpain of Sh and Sj with Sm, respectively. Likewise, an ongoing phase 1 dose-escalation, safety and immunogenicity Sm-TSP-2/Sm-TSP-2Al® trial coupled with a subsequent 2b Sm-TSP-2/Sm-TSP-2Al® trial among Sm and Sh exposed healthy male and female Ugandan adults receiving three-dose immunization could reveal promising cross-species protective effects depending on the level of inter- and/or intra-species polymorphism of the TSP-2 EC2 domain [69].

A vaccine as the current candidate in advanced to pre-clinical and clinical phases with cross-species protective potential is needed to complement preventive measures, and protect long-term against transmission, infection, and disease recurrence and sequelae. Despite the strong evidence of naturally occurring schistosomal hybrids of large functional and structural diversity, its potential impact on current vaccine candidates is yet unclear and requires further research. Vaccine targets exposed at the schistosome tegumental surface should not evolve rapidly leading to sequence heterogenicity in natural parasite populations, and rendering its use as a vaccine candidate ineffective, but rather highly conserved. Additionally, natural history studies seem of particular importance in areas with known endemicity for hybrid schistosomes that are targeted for clinical trials.