The tin-iodate battery is a rechargeable battery for large scale energy storage.

A tin-iodate rechargeable battery is a redox flow battery that was first disclosed in 2021 with high energy density and high power density [1]. The energy density tested with a static battery achieved 150Wh/L at the current density of 100mA/cm2, six times higher than 25Wh/L of the all-vanadium redox flow battery, benefiting from the high solubility of iodic acid in water (13 M) and stannous ions in hydrochloric acid or hydrobromic acid solution (5 M).

The tin-iodate flow battery comprises a tin anode, a carbon cathode, a proton exchange membrane (PEM), and acidic aqueous electrolytes. The tin-iodate battery is constructed based on the following redox reactions:

The protons in the anolyte penetrate the selectively permeable membrane to enter the catholyte and participate in the electrochemical reaction during the discharging process. During the charging process, the protons return to the anolyte while iodine is oxidized to iodate with the help of 5-10% chloride ion catalyst:

Practically, only part of electrochemical reactions needs to be used:

The standard electrode potential is 1.33 V for the tin-iodate couple. However, the actual open-circuit voltage of the battery can achieve 1.55 V due to the high proton and iodate concentrations in the acidic aqueous electrolytes. 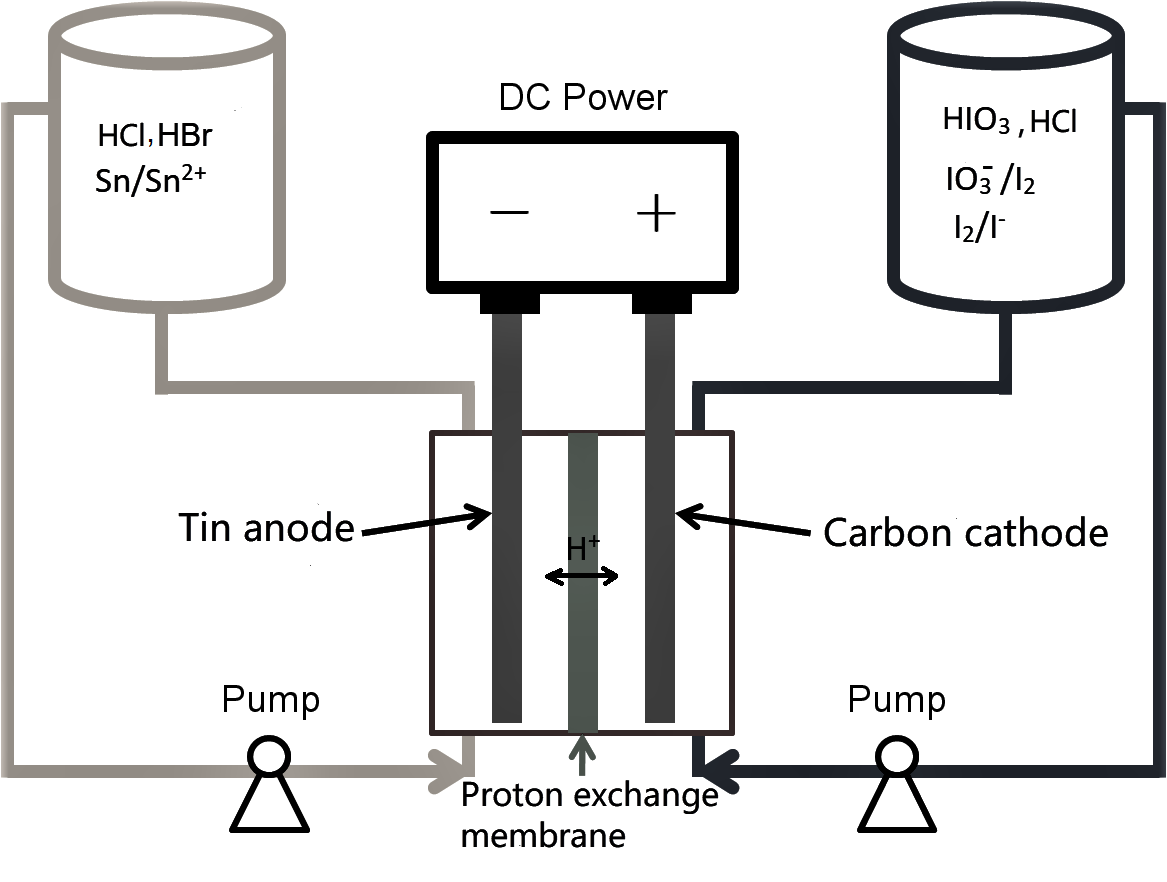 The tin anode may react with the pure high concentration hydrochloric acid anolyte, but the reaction can be prohibited with the increase of stannous concentration in the anolyte, therefore some 20% stannous chloride should be added to the hydrochloric acid anolyte to prevent the reaction at the beginning. Carbon fiber or graphite felt can be used for the cathode material. The cathode should avoid direct contact with the membrane to prevent the membrane from contamination by iodine deposited on the cathode.

Carbon, tin, and iodine are low toxic and the aqueous solution is non-flammable, ensuring the system's safety and environmental friendliness. The costs of graphite, tin and iodic acid are low as well. All the performance characteristics make the tin-iodate battery perfect for large-scale energy storage.

The only challenge is the PEM which should block anions and cations to crossover and only permit protons to permeate. However, the crossover of iodate and stannous ions through the membrane is a serious problem.  Iodate and stannous ions can react with each other in the membrane to produce iodine precipitation. The high crossover rate also deteriorates battery capacity decay during cycling. Different membranes have been tested to solve the problem, including Nafion-115, Fumasep F-1850, FS-950, and multiple layers of membrane, but not very successful so far.

Highly selective membranes with pore sizes of 0.5 nm that completely block iodate anions to crossover are required for the success of the tin-iodate battery. The undesirable crossover is also a problem for the all-vanadium flow battery. Scientists are working on it to solve the problem and better membranes may be commercially available soon[2].

In a typical tin-iodate flow battery, iodine will deposit on the carbon cathode during discharge and tin will deposit on the tin anode during charge. The capacity is not only determined by the volumes of the electrolyte tanks but also limited by the volumes of the electrode active rooms inside the stack. This is inconvenient for the flexibility of a flow battery to independently scale the power and energy.

To prevent iodine from deposition on the cathode, 10-20% ethanol and 10% acetic acid can be added to the catholyte. Most iodine will be granulated to precipitate in the catholyte but will be dissolved easily by the flowing catholyte during changing.

For the anode, graphite felt with appropriate porosity can be used. An addition of 1-5% cupric to the anolyte will granulate the tin deposited on the anode. The tiny tin particles will be washed off from the anode by the flowing anolyte. 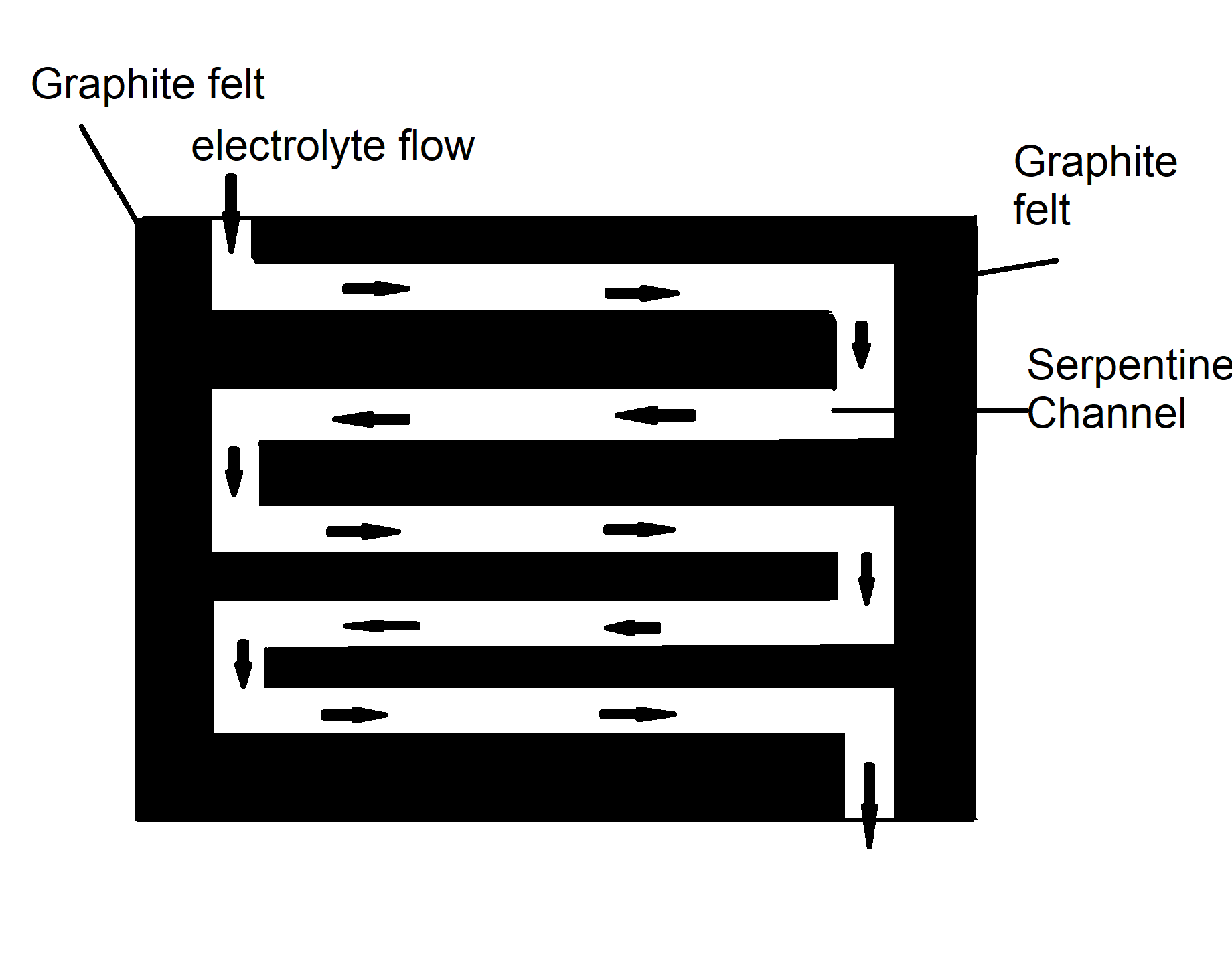 The electrodes have a serpentine channel for the electrolytes to pass through. The tin granules will be filtered by the anode and react on it.

In this way, iodine and tin can be granulated and partially suspended in the electrolytes to realize a complete flow battery. The complete tin-iodate flow battery can directly replace the existing all-vanadium redox battery and can also be used in electrified vehicles to avoid the charging process by simply substituting the charged electrolytes for the discharged ones in power stations.