Sesquiterpene lactones, a vast group of terpenoids isolated from Asteraceae family species, exhibit a wide variety of biological activities and several of them are already available on the medicines market, such as artemisinin. Here are presented and discussed the most recent and impactful results in vivo, preclinical and clinical studies, involving a selection of ten sesquiterpene lactones (alantolactone, arglabin, costunolide, cynaropicrin, helenalin, inuviscolide, lactucin, parthenolide, thapsigargin and tomentosin) and some of their derivatives.

Traditional or folk medicine relies heavily on the use of compounds-rich plants, like those of the Asteraceae family, of which many such species are commercially available in the form of herbal preparations. These are particularly rich in a wide range of natural terpenoids named sesquiterpene lactones [1] that, in some cases, are considered the active principles of such therapeutic plants [2]. Structurally speaking, sesquiterpene lactones are terpenes that have in common a basic structure of 15 carbons (thus the prefix sesqui-) resulting from biosynthesis involving three isoprene units with a cyclical structure along with a fused α-methylene-γ-lactone ring [3]. Sesquiterpene synthases catalyze a common biosynthesis route for sesquiterpene lactones, based on the cyclization of farnesyl phosphate resulting from the 2-C-methyl-D-erythritol-4-phosphate (MEP) and mevalonate (MVA) pathways of dimethylalyl diphosphate and isopentenyl diphosphate precursors in chloroplasts and cytosol, respectively [4]. However, sesquiterpene lactones have very different chemical structures regarding the type and position of the substituents, as well as the size of the non-lactone ring [5][6]. For this reason, in structural terms, sesquiterpene lactones are organized into several subclasses: eudesmanolide (a 6/6 bicyclic structure), guaianolide and pseudoguaianolide (both 5/7 bicyclic compounds), germacranolide (with a 10-membered ring) and xanthanolide (containing a non-cyclic carbon chain and a seven-membered ring) [7][8] (Figure 1).

Some of these subclasses have compounds that exhibit a wide range of biological activities. These range from antitumor [9] to anti-inflammatory, including antimalarial, antimicrobial, antioxidant  [10], neuroprotective [11], hepatoprotective, and immune-stimulant properties [12][13]. Regarding the structure/activity relationship of these compounds, it appears that the α-methylene-γ-lactone nucleus has a crucial role in almost all their observed biological effects, such as cytotoxic, antitrypanosomal, and anti-inflammatory actions [12][14]. Other specific structural moieties of sesquiterpene lactone seem to influence their activity. For example, the presence of electrophilic sites associated with medium/high lipophilicity increase antimycobacterial activity, while a double bond exo to the cyclopentenone ring seems to favor anti-inflammatory activity [7][8][14]. The interaction of the α,β-unsaturated cyclopentenone nucleus with the target depends largely on the geometry of the molecule, which is also a factor that influences the level of activity exhibited by sesquiterpene lactones [7][15]. Moreover, the number of alkylating groups in the structure of sesquiterpene lactones contributes to the level of activity they display, two groups being the optimal number [7][15]. The structure/activity relationship specific to each sesquiterpene lactone presented in this review will be discussed in detail throughout Section 2. Scientific evidence shows an action mechanism common to sesquiterpene lactones. The structural elements α-methylene-γ-lactone and α,β-unsaturated cyclopentenone act as alkylating groups on proteins found in cells through Michael addition, especially their thiol groups. They thereby affect cell functionality, i.e., gene regulation, protein synthesis, and cell metabolism [15][16][17].

In recent years, the scientific community has already shown an oustanding growth of interest in the sesquiterpene lactones, largely due to the success of artemisinin—one of the best known—and the broad spectrum of activities exhibited by this compound’s chemical family [18][19][20]. Thus, the high number of studies published concerning their isolation from new natural sources, total and semi-synthetic syntheses, and evaluation of pharmacological potential, is not surprising. Natural sesquiterpene lactones exhibit poor pharmacokinetic properties due mainly to their low bioavailability, deriving from low solubility in water. As a result, in order to overcome these limitations, research interest in the synthesis of their derivatives has increased [21][22]. In addition, structural modification and synthesis has also allowed for an in-depth knowledge of their chemical properties, as well as the establishment of structure-activity relationships.

In terms of health promotion, the applications of sesquiterpene lactones and their derivatives are a key research area. From this point of view, in vivo, preclinical and clinical studies are those that allow a more realistic assessment of their medicinal potential [23].

The literature on this topic is extensive, especially for the most successful compounds; however, studies on less known sesquiterpenes and their derivatives show that these compounds deserve more attention, since they could play an important part in future human health maintenance. Therefore, this review aims to point out the results of the most impactful and recent in vivo and (pre)clinical studies of these insufficiently explored compounds and derivatives, which could be a valuable alternative in the development of new therapeutic drugs.

The sesquiterpene lactones dealt with in this review (Figure 2) have proved to be very useful compounds with promising anticancer and anti-inflammatory bioactivities in particular. For instance, alantolactone (1) was shown in vivo to be able to reduce tumor size by over 50%, while increasing life expectancy and reducing pathological indicators across several different cancer types. In addition, synergistic effects with well-known cancer therapeutics were also reported. Arglabin (2) in salt form could be used to treat several cancers and possesses valuable pharmacokinetic characteristics highly sought for in therapeutic drugs. It has no adverse effects described in the literature. Antitrypanosomal, antitumor and anti-inflammatory activities are reported for cynaropicrin (4). Another compound, helenalin (5), inhibits essential factors in both cancer and inflammation, i.e., the NF-κB pathway and the transcription of inflammatory cytokines. Inuviscolide (6) demonstrates potential as an anti-inflammatory therapeutic compound, being able to reduce rat ear and paw edema and LTB4 generation in intact cells. Lactucin (7) and derivatives lactupicrin (8) and lactucopicrin (9) have a strong potential as phytopharmaceutical agents for treatment of anxiety and sleep disorders, being the main active components of long commercialized substances, e.g., Sedan®, without observing side-effects.

Of all the sesquiterpene lactones reviewed in this work, parthenolide (10) and its derivatives DMAPT (11) and HMPPPT (12) are those most mentioned in the literature, with several studies particularly reporting their excellent anti-inflammatory and antitumor activities. Some work reveals synergistic effects of these compounds with current anticancer drugs, favoring more potent and selective antitumor action. Parthenolide derivatives have been designed and DMAPT (11) is 1000-fold more soluble in water than the natural product, while maintaining a similar mechanism of action with improved anticancer and anti-inflammatory activities.

Thapsigargin (13) has the particular capacity to cause endoplasmic reticulum stress and thus cell apoptosis, an interesting pharmacological property to be retained or potentiated in derivatives aimed at anticancer therapy. An example is mipsagargin (14), which is currently undergoing preclinical evaluation for selective toxicity against cancer cells in tumor sites, with minimal side-effects for the host. Another active compound is tomentosin (15), additionally with potential applications in cancer but also as antifungal and antifeedant. 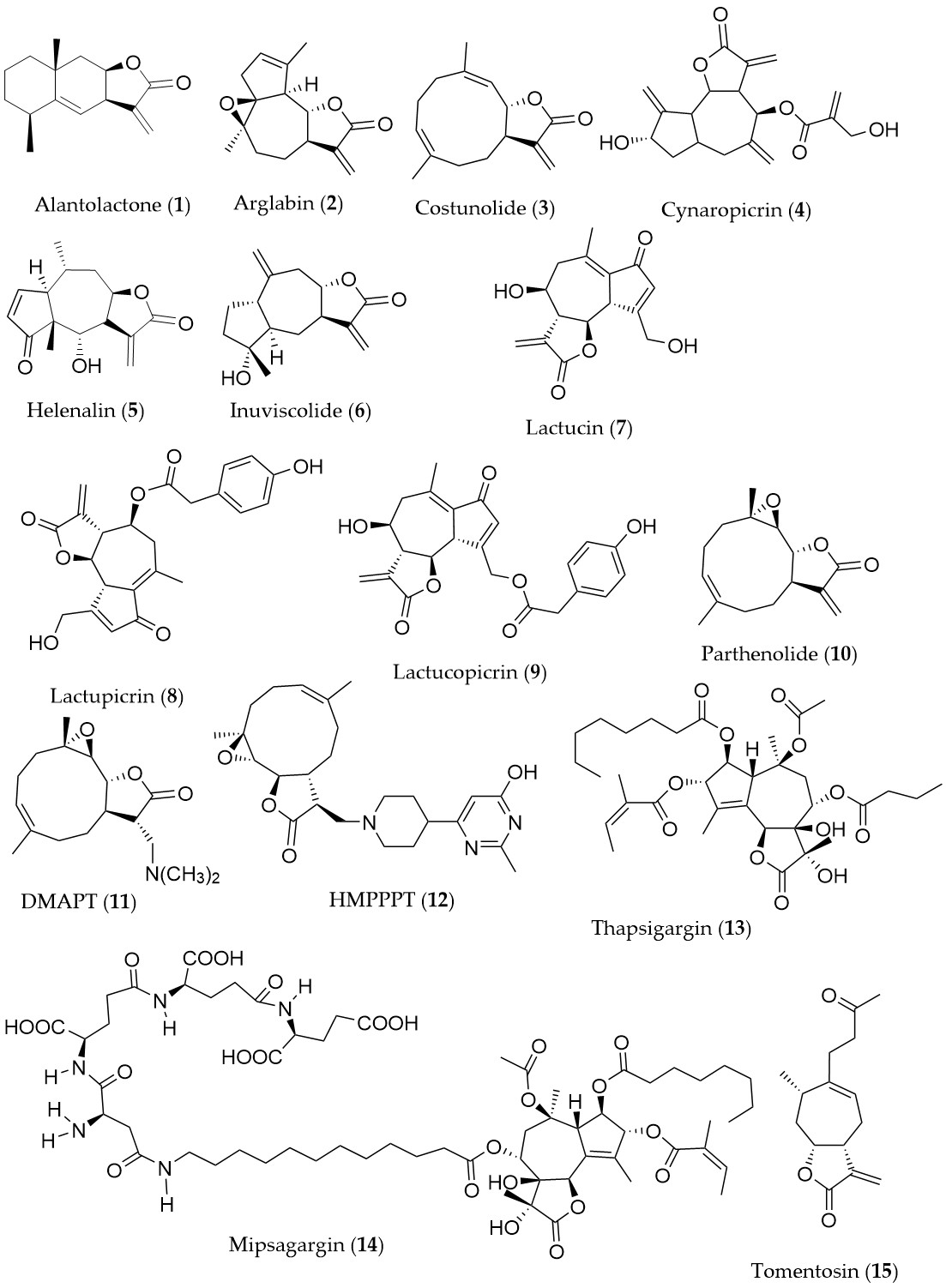 In summary, given the activities described in this review these sesquiterpene lactones exhibit properties that justify more research by the scientific community, to drive preclinical and clinical studies leading to development of new drugs.