Fruits and vegetables are rich sources of bioactive compounds and micronutrients. Some of the most abundant are phenols and carotenoids, whose consumption contributes to preventing the occurrence of degenerative diseases. Recent research has shown the potential of non-thermal processing technologies, especially pulsed electric fields (PEF), ultrasounds (US), and high pressure processing (HPP), to trigger the accumulation of bioactive compounds through the induction of a plant stress response. Furthermore, these technologies together with high pressure homogenization (HPH) also cause microstructural changes in both vegetable tissues and plant-based beverages. These modifications could enhance carotenoids, phenolic compounds, vitamins and minerals extractability, and/or bioaccessibility, which is essential to exert their positive effects on health. Nevertheless, information explaining bioaccessibility changes after non-thermal technologies is limited. Therefore, further research on food processing strategies using non-thermal technologies offers prospects to develop plant-based products with enhanced bioaccessibility of their bioactive compounds and micronutrients. In this entry, we attempt to provide updated information regarding the main effects of PEF, HPP, HPH, and US on health-related compounds bioaccessibility from different vegetable matrices and the causes underlying these changes. Additionally, we propose future research on the relationship between the bioaccessibility of bioactive compounds and micronutrients, matrix structure, and non-thermal processing. 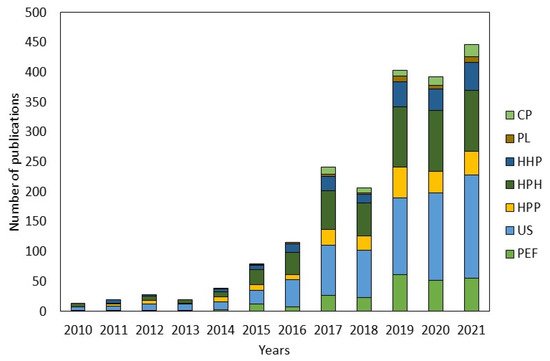 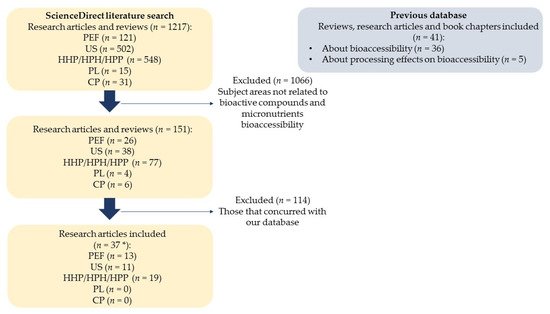 Carotenoids are lipophilic pigments consisting of 40-carbon molecules and multiple conjugated double bonds [5]. Chemically, carotenoids can be divided into xanthophylls, which contain one or more oxygenated groups in their structure (e.g., lutein and zeaxanthin), and carotenes, which are unoxygenated carotenoids (e.g., lycopene and β-carotene) [6]. Carotenoids can be found as cis or trans isomers due to their structure rich in conjugated doubled bonds. The long-chain carotenoids are much more prone to oxidization and isomerization, which could occur during processing and storage [6].
In order to be bioaccessible, carotenoids must be released from the food matrix during digestion. In fruit and vegetables, carotenoids are usually stored in chromoplasts, which together with the cell wall and membrane act as natural barriers for their release. Once carotenoids have reached the intestine, they must be incorporated into mixed micelles to be absorbed. Pancreatic secretions and bile salts are required to release fat-soluble compounds and aid their partition into lipid droplets (micelles) [7]. Diverse factors may interfere with their bioaccessibility: food matrix and structure, their concentration, deposition and distribution in chromoplasts, their chemical structure, or their linkages to other constituents (dietary fiber, proteins, carbohydrates, among others). In general, those compounds with a more flexible structure are easily absorbed (e.g., phytoene) [8][9]. Furthermore, Tyssandier et al. [10] suggested that less hydrophobic compounds (e.g., xanthophylls) would be easily transferred to micelles due to their location in the surface of lipid droplets, which is supported by several studies [9][11][12]. Nevertheless, carotenoid bioaccessibility is not only dependent on the food matrix or chemical structure, as it has been reported that the same product may contain carotenoids that, even though presenting a similar structure, differ in their absorption. This is the case of ζ-carotene and lycopene, which, in tomato products, are highly and poorly bioaccessible compounds, respectively; this difference in absorption could be related to their deposition form, as reported by Panozzo et al. [13] in tomato varieties or Palmero et al. [14] in tomato and carrot varieties. Carotenoids are synthesized and stored in diverse types of chromoplasts and also deposited differently (solid crystalloid, plastoglobuli, or globular-tubular) depending on the food product. Their physical state could prevent their absorption during digestion (crystalloid aggregates) such as in carrots and tomatoes or could enable an efficient release and assimilation (globular–tubular form), as in butter squash or sweet potato [12][15][16]. Additionally, cell properties (membrane thickness, size, organization) and linkages with other compounds also play an important role in this phenomenon. Jeffery et al. [15] established that a fibrous cell wall, compact cell organization and small cell size may reduce bioaccessibility as well as the presence of large amounts of dietary fiber, which impairs micelles formation, thereby blocking carotenoid absorption in the small intestine [17]. This effect is clearly observed in raw products, but some types of processing are also prone to modifying the rheological properties of liquid matrices.
In addition, some of them can be positively or negatively affected by processing technologies, cooking methods, the addition of products rich in lipids or proteins (oil, milk, among others), or ultimately a combination of these factors. Previous studies have proven that the disruption or weakening of natural barriers (cell wall, membrane, and chromoplasts) is essential for improving carotenoid bioaccessibility [14]. Therefore, food processing has become a valuable tool for this purpose, as reported by numerous authors [18].

Phenolic compounds are characterized by the presence of one or more aromatic rings, which include at least a hydroxyl group. It is a heterogeneous group that can be classified based on its structure: phenolic acids, flavonoids, coumarins, stilbenes, or lignans. Phenolic compounds are mostly linked to carbohydrates or organic acids, although some of them are also stored in vacuoles or present in the cytosol where they are synthesized [19]. They can be found in different forms in plants, such as aglycones (free phenolic acids), esters, or glycosides. As occurs with carotenoids, to be absorbed, phenolic compounds must be first released from the food matrix. Afterwards, they are either assimilated in the small intestine or further fermented in the colon if they are linked to dietary fiber.
Phenolic bioaccessibility is affected by several factors such as food matrix, chemical structure, interactions with other compounds, and food processing. Their molecular structure strongly affects their bioaccessibility. For instance, anthocyanins are very sensitive to degradation in the gastrointestinal tract but isoflavones are highly stable [3]. In addition, phenolic acids can be easily absorbed in aglycone form, but those esterified are less bioaccessible because ester bonds need to be hydrolyzed [3].
Processing generally reduces particle size, which has been associated with enhanced phenolic bioaccessibility [3]. However, it also enables the creation of new interactions between compounds characterized by the presence of hydrophobic aromatic rings and hydroxyl groups and other macromolecules such as polysaccharides (starch, cellulose, and pectin), proteins and lipids [20], which would affect bioaccessibility. Those compounds with high molecular weight or a high number of hydroxyl groups interact more with polysaccharides (H-bonds, or hydrophobic interactions) than those with low molecular weight, which hinders their bioaccessibility [21]. Molecular weight, structural flexibility, and the number of hydroxyl groups also play an important role in the formation of protein–phenol interactions, which can act as carriers during digestion. Likewise, interactions with lipids could be protective for phenolic compounds during the gastrointestinal tract, which can be positive for enhancing bioaccessibility [21]. To the best of our knowledge, the information about the effect of dietary lipids on phenolic bioaccessibility is limited. Although most phenolic compounds are hydrophilic, more apolar compounds (e.g., curcumin) can be positively affected by the presence of lipids, as mixed micelles can stabilize them [22].
Several studies have demonstrated that the disruption of cell walls and cellular compartments as well as the decrease in particle size, are essential for phenolic release and absorption, which can be achieved through processing technologies [3]. Nevertheless, information about the effect of non-thermal technologies on phenolic bioaccessibility is rather limited.

Some minerals are essential for the body to perform vital functions (e.g., Ca, Fe, Mg, and Zn), therefore, their bioaccessibility is highly relevant to maintain normal metabolic functioning. After ingestion of food, most minerals are absorbed in the small intestine and transported into the bloodstream through active and passive processes [23]. Minerals’ bioaccessibility depends on the content, composition, and chemical species of each mineral, as well as the presence of promoters (e.g., organic acids) or inhibitors (e.g., phytate, oxalates, fibers) of absorption, also known as antinutrients [24]. In order to evaluate mineral bioaccessibility, their solubility is studied since it correlates well to their intestinal absorption [25]. However, some authors have reported that the dialysis method is a better indicator of bioaccessibility than the former because the presence of some constituents in the food matrix can alter their solubility [24]. Dialysis involves mineral transport through a semipermeable membrane with a fixed pore size, which reproduces gastrointestinal conditions more accurately [24].
Some processing technologies cause changes in minerals’ bioaccessibility because their application decreases antinutrient content or increases organic acid content. Organic acids can be bound to minerals and form soluble ligands, which prevent the formation of insoluble complexes with phytate. In addition, the activation of phytases could also be beneficial for mineral bioaccessibility [26].

Some vitamins can be synthesized by the human body, although certain levels of intake by diet are necessary to cover the organism demand. Vitamins can be classified into two groups depending on their solubility, which will be differently absorbed during digestion. Fat-soluble vitamins have low molecular weight and are not soluble in water (vitamins A, D, E, and K). These must be released from the food matrix and incorporated into micelles to be absorbed in the small intestine [27]. On the other hand, water-soluble vitamins (vitamin C and the B group) have one or more polar groups and are highly soluble in polar environments. They need to be released from the matrix to be absorbed in the small intestine, but contrary to fat-soluble vitamins, they are absorbed by active transport instead of being micellarized [23].
Vitamins’ bioaccessibility depends on several factors such as their chemical structure and physical state, temperature, light, pH, and oxygen, or their interaction with other compounds. For instance, sulfur or glutathione presence favors vitamin C stability, whereas fructose can exert a negative influence. Therefore, processing technologies can also influence some of these factors, and the stability and bioaccessibility of vitamins [28].

PEF, HPP, HPH, and US can cause permeability changes in cell membranes, which is directly connected to microstructural changes in whole matrices and particle size reduction in liquid matrices. Generally, this facilitates the release of carotenoids and phenolic compounds, which improves their bioaccessibility. On the other hand, particle size reduction can also facilitate the formation of a strong fiber network due to more interactions between fragments of cells, which increase the viscosity of the product (juices and purees) and entrap carotenoids avoiding their correct absorption. Little information is available about the effect of viscosity and pectin on phenolic bioaccessibility, but it has been suggested that phenol-fiber interactions play an important role.

Structural properties of matrix are one of the most important factors determining bioactive compounds bioaccessibility. Hence, further studies about the effect of these technologies on viscosity, fiber, particle size, pectin properties, and microstructural characteristics would be necessary to develop non-thermal strategies to enhance bioactive compounds bioaccessibility and to understand the main causes of these changes. Finally, future research should also focus on shelf-life, quality-related enzyme activities, and consumer’s acceptance, given that processing may alter the typical flavor of the final product, their quality attributes, or their microbiological stability during storage.