Infertility (defined as the inability to conceive within a year of unprotected coitus) is a global health and social issue affecting close to 15% of couples. In half of the couples seeking medical treatment for infertility, male factor infertility is identified together with abnormal semen characteristics. The focus of current clinical practice is laid on the presence of sufficient sperm count in the ejaculated specimen with adequate motility and morphology of spermatozoa capable of giving fertilization a chance (conventional semen analysis).

Genome instability may play a role in severe cases of male infertility, with disrupted spermatogenesis being just one manifestation of decreased general health and increased morbidity. Here, we review the data on the association of male infertility with genetic, epigenetic, and environmental alterations, the causes and consequences, and the methods for assessment of genome instability. Male infertility research has provided evidence that spermatogenic defects are often not limited to testicular dysfunction. An increased incidence of urogenital disorders and several types of cancer, as well as overall reduced health (manifested by decreased life expectancy and increased morbidity) have been reported in infertile men. The pathophysiological link between decreased life expectancy and male infertility supports the notion of male infertility being a systemic rather than an isolated condition. It is driven by the accumulation of DNA strand breaks and premature cellular senescence. We have presented extensive data supporting the notion that genome instability can lead to severe male infertility termed “idiopathic oligo-astheno-teratozoospermia.” We have detailed that genome instability in men with oligo-astheno-teratozoospermia (OAT) might depend on several genetic and epigenetic factors such as chromosomal heterogeneity, aneuploidy, micronucleation, dynamic mutations, RT, PIWI/piRNA regulatory pathway, pathogenic allelic variants in repair system genes, DNA methylation, environmental aspects, and lifestyle factors.

Infertility (defined as the inability to conceive within a year of unprotected coitus) is a global health and social issue affecting close to 15% of couples. In half of the couples seeking medical treatment for infertility, male factor infertility is identified together with abnormal semen characteristics [1].
Increasing infertility is considered to be mostly dependent on the lower fecundity of women planning their first pregnancy at a more advanced age, coupled with decreasing semen quality in men [2]. In 1992, it was reported that semen quality had markedly deteriorated over the previous 50 years [3]; this finding has been subsequently confirmed [4]. The reasons for such a decline are still not clear. A possible interplay of genetic, environmental, and lifestyle features has been suggested. However, our knowledge of the impact proportions is presently extremely limited, and a significant number of male infertility cases and decreased sperm quality remain unexplained. Current insufficient understanding of sperm production (spermatogenesis) biology limits the possibility of a precise diagnosis in up to 75% of severe male infertility cases where no causation factor is detected [2]. These cases are termed ‘idiopathic male infertility’.
The focus of current clinical practice is laid on the presence of sufficient sperm count in the ejaculated specimen with adequate motility and morphology of spermatozoa capable of giving fertilization a chance (conventional semen analysis). However, semen analysis fails to predict the fertilizing potential of the male gamete precisely. Indeed, a substantial overlap of semen parameters between fertile and infertile males has been reported [5]. Moreover, the semen analysis ability to indicate the appropriate artificial reproductive techniques for couples diagnosed with severe or unexplained infertility also appears to be limited [6][7]. For these very reasons, researchers started exploring possible genetic disorders behind male infertility as well as the utilization of additional tests to gain more insight into the reproductive capacity of an individual [8]. An extensive amount of male infertility research has been dedicated to the investigation of the role played by sperm DNA integrity (secondary DNA structure related to chromatin packaging). Evaluation of sperm DNA integrity has proved to be a strong predictor of male infertility in vivo, providing an independent marker only partly related to the conventional semen parameters [9][10][11][12][13].
An abnormal sperm chromatin structure (defective histone-to-protamine replacement) has been found to be associated with the incomplete maturation of sperm during spermiogenesis [14]. However, other causative mechanisms, including abortive apoptosis and oxidative stress, have also been described [15]. A systematic review and meta-analysis have concluded that DNA-damaged spermatozoa will affect the outcome of conventional IVF but are unlikely to influence the results of ICSI treatment [15][16][17]. Nevertheless, with different groups presenting different results (perhaps due to variations between clinics with respect to patient proportions with different genetic backgrounds and methodology (based on the staining equilibrium principle, reviewed in [15][18][19][20]), this remains a topic of debate.
The central biological event of fertilization is the transition of the paternal and maternal genomes to the offspring. Genome instability—understood as reduced fidelity with which genetic information is passed on to daughter cells—can impair both mitosis and meiosis. Changes taking place in the course of DNA replication, DNA repair, and cell division (chromosome duplication, recombination, segregation) provide a natural source of genome instability. Depending on the nature of processes involved, genome instability can lead to (a) single nucleotide variants and microsatellite expansions caused by errors in DNA synthesis and defective DNA repair mechanisms; (b) variations in the number of chromosomes (aneuploidy) due to mistakes of the chromosome segregation apparatus; (c) other types of genetic modifications, such as gross chromosomal rearrangements, copy number variants (CNVs), hyper-recombination and loss of heterozygosity, triggered in the majority of cases by single-strand DNA gaps or double-strand breaks (DSBs) occurring as a consequence of replication stress [21]. Apart from genetic variations, growing attention is now being paid to epigenetic factors that influence gene expression but are not caused by alterations in the DNA sequence. Said epigenetic variations are based on DNA methylation, post-translational modifications of histone tails, and non-coding RNA molecules.
It was recently suggested that genome instability could lead to decreased general health and increased morbidity [22]. It is possible that infertility or decreased semen quality could be among the drawbacks or symptoms of genome instability. Somatic chromosome mosaicism and chromosome instability are likely mechanisms or elements of the pathogenetic cascade of a wide spectrum of pathologies and can mediate inter-individual genetic variation, prenatal development, and aging [23]. Genome instability may be responsible for severe cases of infertility in men—a multifactorial condition manifested by disrupted spermatogenesis, among other traits. Research in male infertility has provided evidence supporting the assumption that impaired spermatogenesis (particularly in idiopathic infertility cases) is often associated with factors not limited to testicular dysfunction. An increase in the frequency of urogenital disorders and rising incidence rates of various types of cancer (testicular, prostate, colon, melanoma), as well as a decline in overall health (manifesting itself through lower life expectancy and higher morbidity), have been reported in infertile men [24][25]. The pathophysiological link between lower life expectancy and male infertility supports understanding of the male infertility phenomenon as a systemic rather than an isolated condition [26].
An array of genetic and epigenetic factors of male infertility, including single nucleotide variants, CNVs, protamine content, methylation characteristics, protein content, and small RNAs, have been analyzed in various studies. Currently, the above assays are only used within the research setting being not routinely carried out by fertility clinics [27]. In the present review article, we survey the data on the association of male infertility with genetic alterations, their respective causative factors, and consequences, as well as the methods for genome instability assessment.
The content of the review is schematically summarized in Figure 1. 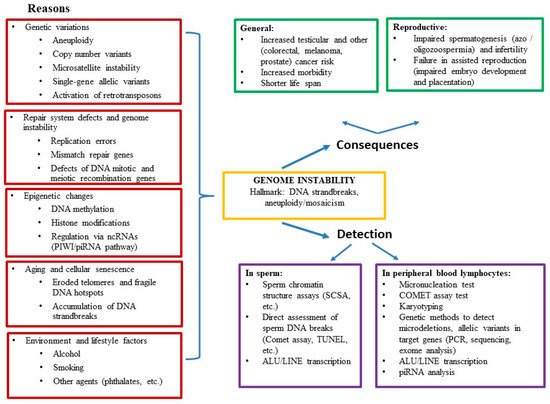 Figure 1. Structure of the article.

In summary, there are extensive data supporting the notion that genome instability may lead to severe male infertility (OAT), whereas genetic tests recommended for routine clinical investigation (such as testing for karyotype, Y chromosome AZF region microdeletions) provide a diagnosis in only 15–25% of cases. We have detailed that genome instability in men with OAT depends on several other genetic and epigenetic factors such as chromosomal heterogeneity, aneuploidy, micronucleation, dynamic mutations, RT, PIWI/piRNA regulatory pathway, pathogenic allelic variants in repair system genes, DNA methylation, and environmental aspects (e.g., smoking, alcohol).