A rockfall is defined as the “detachment, fall, rolling, and bouncing of rock fragments. It may occur singly or in clusters, but there is little dynamic interaction between the most mobile moving fragments, which interact mainly with the substrate (path)".

The most widely used classification system of landslides is the one derived from the Varnes classification [1], which was slightly modified by [2] and more recently by [3]. Excluding slope deformation, five types of rock movements are described by [3]: rock fall; rock topple; rock slide; rock spread; and rock avalanche. A rock fall is defined as the “detachment, fall, rolling, and bouncing of rock fragments. It may occur singly or in clusters, but there is little dynamic interaction between the most mobile moving fragments, which interact mainly with the substrate (path). Fragment deformation is unimportant, although fragments can break during impacts”. A rock avalanche is defined as an “extremely rapid, massive, flow-like motion of fragmented rock from a large rock slide or rock fall”. As there is a continuous transition between rock falls and rock avalanches by a progressive increase of volume, both have been included in the scope of this article. However, for the sake of simplicity, we will use the term “rock fall” to name both. Figure 1 shows an example of rockfall. 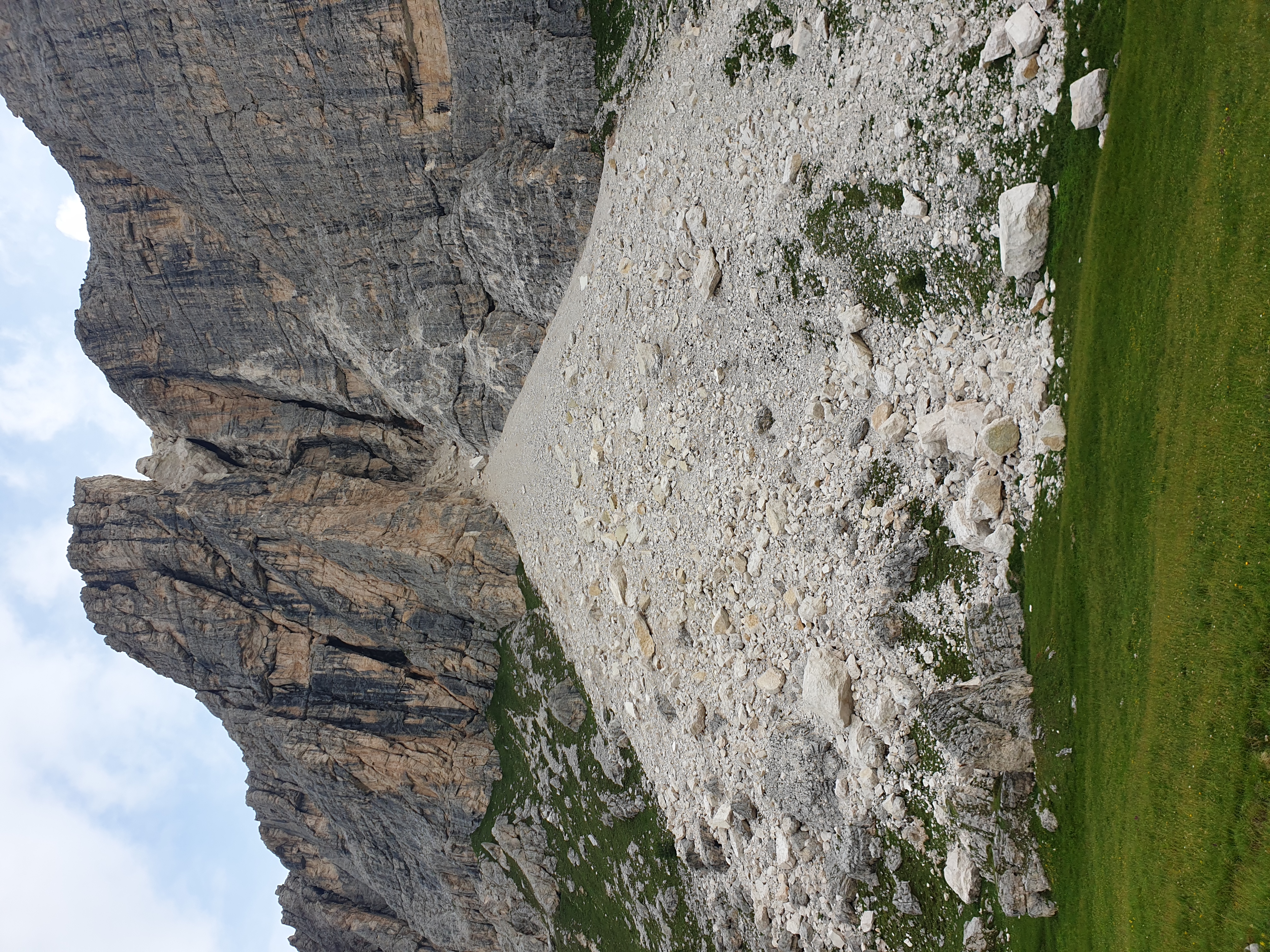 Figure 1. Recent rockfall event generated in one of the cliffs that extend from the Lastoi de Formin, near the Forcella Giau, Dolomites, Italy. The destabilization of the rock mass began with a toppling mechanism, subsequent free fall and impact against the opposite rock wall, which caused its fragmentation into numerous blocks. The latter, as well as the scar, stand out for their bright color. Photo J. Corominas.

Ref. [4] divided flow-like movements (where particles interact with each other and travel as deforming mass) into dry granular flows and granular flows with special mobilization phenomena, which have usually a bigger size, but it is difficult to establish a fixed boundary. Their excessive mobility could be the result, for instance, of undrained loading.

Note that the two nouns of “rock fall” are separated according to the general principle of the Varnes classification (the first noun describes the material and the second describes the type of movement), but the term “rockfall” is often used by engineers [5]. Thus, we will use “rockfall” within the rest of this article. The term “fragmental rockfall” may be used to name a rockfall strico sensu.

Fragmental rockfalls may be analyzed by simulating the propagation of one single block that interacts only with the substrate (single block methods, [6]) or by including a fragmentation law [7][8]. Rock mass falls can be analyzed by modelling each rock fragment (multi-block methods, including discrete element methods [9]) or as a granular flow remaining in a fairly continuous contact with the flow bed [10]. The methods that model explicitly the rock fragments may or not model the breakage. They also may or not model the interaction with the vegetation [11]. The simplest methods allow a lot of simulations to be run in a probabilistic approach.
A simplified energetic approach can also be used with the concept of reach angle that express the energy loss during the propagation. The energy line represents the energy (divided by the weight) of a rock mass as a function of the horizontal displacement along the rockfall path. Theoretically, it starts from the gravity center of the rock mass before its detachment. The energy consists of potential energy and kinetic energy. The energy line decreases along the rockfall path due to the energy that is lost when the rock fragments rebound, roll, or slide on the ground. Thus, its inclination reflects the energy loss per unit of horizontal displacement. When a rock mass reaches the intersection of the energy line with the topography, the energy consists only of its potential energy and then it stops.

The definition of hazard given by [12] is “A condition with the potential for causing an undesirable consequence. The description of landslide hazard should include the location, volume (or area), classification and velocity of the potential landslides and any resultant detached material, and the probability of their occurrence within a given period of time.”
For rockfalls, the condition with the potential for causing an undesirable consequence is the passage of rock material, and the parameters that directly determine the consequence are the volume, the trajectory, and the velocity of the rock fragments. They depend on the location and geometry of the prone to fall rock compartments and on the characteristics of the propagation zone. The description of rockfall hazard at a given location should ideally include the probabilities (or the frequencies) of a rock fragment reaching this location within a given period of time and with a minimum volume, velocity or energy, and height. Different periods of time and other parameters can be considered. When an element at risk is on the top of a cliff, the condition is just the release of a rock compartment that supports the element at risk. When the time frame is not taken into account explicitly, the rockfall hazard is not fully described and the analysis is called a susceptibility analysis [12]. Comprehensive hazard and susceptibility analyses can be qualitative or quantitative.
According to the type of study, two approaches can be taken: a localized hazard approach, where the prone to fall (or potentially unstable) rock compartments are localized and described, and a diffuse (or global) approach, where it is assumed that a rock compartment may fall from any point of a homogenous source area. According to the approach taken, the way to obtain the probability of a rock fragment reaching a location within a given period of time and the concepts used are different.

For a prone to fall rock fragment to pass through a point within a given period of time (event C), it must be released from the source area (event A) and propagate (or travel) from the source to the point considered (event B). Thus, the probability of event C is the probability of event A multiplied by the probability of event B, given that event A has occurred [13][14][15]. In the present state of knowledge, no validated mechanical approach is able to quantitatively determine the failure probability of a potentially unstable rock compartment in a given period of time, and it is usually assessed by expert judgement. When localized hazards belong to a homogenous area where the overall failure frequency has been estimated, the failure probabilities estimated by expert judgement can be constrained by the overall frequency [16][17]. For monitored unstable compartments, the analysis of accelerating creep sometimes allows the time of failure to be predicted. Different prediction methods and case studies were described for large rockslides by [18][19][20][21].

An element at risk exposed to a diffuse hazard may be impacted periodically by a rockfall. That is why a diffuse hazard is usually assessed by a passage temporal frequency that is obtained from a rockfall inventory (or data base) covering a known period. This inventory may identify rockfall released in a given area or rock fragments deposited in an area of interest. As the frequency is strongly dependent on the volume, an inventory should include the volume of each event or fragment. When using an inventory of rockfalls released in a given area, a propagation analysis is needed to infer the passage frequency from the release frequency. Note that the concept of temporal frequency is not suitable to describe a localized hazard, because the release of a given rock compartment occurs once only.

In the case of rockfalls, the risk is often analyzed considering different volumes and energies, which have different probabilities (or frequencies). A method for rockfall quantitative risk assessment is described by [23].

Different types of risk can be considered [12].

An example of calculation of human risk for a 195 m long trail section exposed to a diffuse rockfall hazard is given in Table 1.

Table 1. Example of calculation of human risk for a 195 m long trail section exposed to a diffuse rockfall hazard (modified from [25]).