Transthyretin (TTR) amyloidosis is caused by systemic deposition of wild-type or variant amyloidogenic TTR (ATTRwt and ATTRv, respectively). ATTRwt amyloidosis has traditionally been termed senile systemic amyloidosis, while ATTRv amyloidosis has been called familial amyloid polyneuropathy. Although ATTRwt amyloidosis has classically been regarded as one of the causes of cardiomyopathy occurring in the elderly population, recent developments in diagnostic techniques have significantly expanded the concept of this disease. For example, this disease is now considered an important cause of carpal tunnel syndrome in the elderly population. The phenotypes of ATTRv amyloidosis also vary depending on the mutation and age of onset. Peripheral neuropathy usually predominates in patients from the conventional endemic foci, while cardiomyopathy or oculoleptomeningeal involvement may also become major problems in other patients. Electron microscopic studies indicate that the direct impact of amyloid fibrils on surrounding tissues leads to organ damage, whereas accumulating evidence suggests that nonfibrillar TTR, such as oligomeric TTR, is toxic, inducing neurodegeneration. Microangiopathy has been suggested to act as an initial lesion, increasing the leakage of circulating TTR. Regarding treatments, the efficacy of liver transplantation has been established for ATTRv amyloidosis patients, particularly patients with early-onset amyloidosis. Recent phase III clinical trials have shown the efficacy of TTR stabilizers, such as tafamidis and diflunisal, for both ATTRwt and ATTRv amyloidosis patients.

Transthyretin (TTR) amyloidosis is caused by systemic deposition of wild-type or variant amyloidogenic TTR (ATTRwt and ATTRv, respectively). ATTRwt amyloidosis has been traditionally named senile systemic amyloidosis because postmortem studies revealed that its prevalence becomes higher as age at examination increases [1]. On the other hand, ATTRv amyloidosis has been called familial amyloid polyneuropathy [2][3][4][5]. Although this disease was originally reported in geographically restricted areas (i.e., endemic foci) of Portugal, Japan, and Sweden [6][7][8], its global prevalence has been demonstrated [2][9]. The Val30Met mutation, alternatively called p.Val50Met according to the Human Genome Variation Society nomenclature, has been considered the most common mutation because patients from endemic foci and many of the late-onset (more than 50 years of age) patients from nonendemic areas have this mutation [2][10]. However, recent progress in diagnostic techniques has increased the number of newly diagnosed patients with non-Val30Met mutations [11]. Over 130 mutations have been reported so far [12], and certain types of non-Val30Met patients are more frequent than Val30Met patients in some countries [13][14][15].
Regarding the treatment for ATTR amyloidosis, the efficacy of liver transplantation, which is usually indicated for early-onset ATTRv amyloidosis patients, has been established since the 1990s [16][17]. Recent phase III clinical trials have shown the efficacy of TTR stabilizers for both ATTRwt and ATTRv amyloidosis patients [18][19][20]. In addition, gene-silencing drugs that significantly reduce the amount of TTR produced in the liver have also become available for ATTRv amyloidosis [21][22]. Eliminating causative proteins is more reasonable than merely stabilizing the protein because nonfibrillar TTR may also exert harmful effects, as described later.

As ATTR amyloidosis is a systemic disease, patients exhibit variable clinical features depending on the site of amyloid deposition [23]. ATTRwt amyloidosis has classically been regarded as one of the causes of cardiomyopathy in the elderly population. Studies of autopsy specimens revealed that a significant proportion of the elderly population have wild-type TTR deposition, particularly in the heart (12 to 25% of subjects aged >80 years), despite a lack of relevant symptoms [24][25][26]. However, the recent development of diagnostic techniques for amyloidosis has significantly expanded the concept of this disease [27]. For example, this disease is now considered an important cause of carpal tunnel syndrome in the elderly population [27][28]. Some studies have also suggested an association between wild-type TTR deposition in ligaments and spinal canal stenosis [27][29][30].
The phenotypes of ATTRv amyloidosis are also variable, depending on the mutation and age at onset [2][12]. As the classical name “familial amyloid polyneuropathy” indicates, peripheral neuropathy usually predominates in patients with conventional endemic foci [31][32]. Cardiomyopathy or oculoleptomeningeal involvement may also become major problems in others, particularly in patients with non-Val30Met mutations [12][33]. For example, Val112Ile and Thr60Ala mutations are usually associated with cardiac amyloidosis, while Tyr114Cys mutation causes oculoleptomeningeal amyloidosis [12]. Regarding the most common mutation, Val30Met (i.e., ATTR Val30Met amyloidosis), patients from the conventional endemic foci of Portugal and Japan exhibit textbook features of amyloid neuropathy, such as the following: early disease onset ranging in age from the late 20s to early 40s; a high penetrance rate; a nearly 1-to-1 male-to-female ratio; marked autonomic dysfunction; loss of superficial sensation, including nociception and thermal sensation (i.e., sensory dissociation); atrioventricular conduction block requiring pacemaker implantation; and the presence of anticipation of age at onset (Table 1) [2][34][35][36]. By contrast, patients with Val30Met mutations from nonendemic areas exhibit an older age at disease onset of over 50 years, a low penetrance rate, extreme male preponderance, relatively mild autonomic dysfunction, loss of all sensory modalities rather than sensory dissociation, the frequent presence of cardiomegaly, and the absence of anticipation of age at onset [2][10][37][38][39]. Despite the presence of the same mutation in the TTR gene, the reason for the differential clinical features between early- and late-onset cases has not been clarified.
Table 1. Comparison of the two major forms of hereditary transthyretin Val30Met amyloidosis *.
* Based on previous reports [2][23][40]. 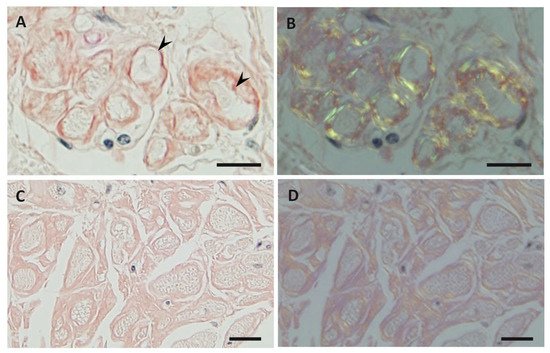 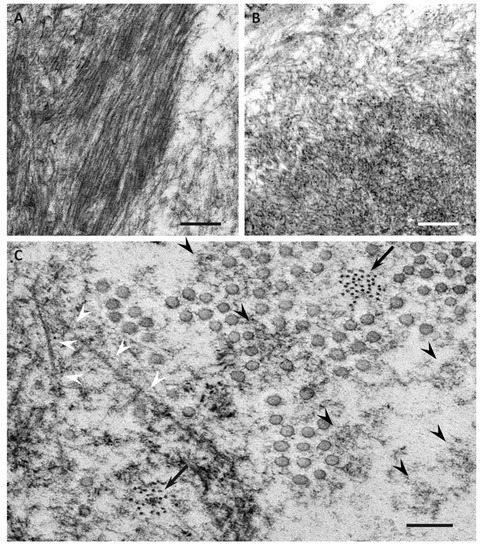 Figure 2. Representative electron microscopic photographs of amyloid fibrils in early-onset ATTR Val30Met amyloidosis patients from endemic foci (A,C) and late-onset ATTR Val30Met amyloidosis patients from nonendemic areas (B). Cross sections of sural nerve biopsy specimens. Uranyl acetate and lead citrate staining. Amyloid fibrils tend to be long and thick in early-onset patients from endemic foci (A), whereas those in late-onset patients from nonendemic areas are generally short and thin (B). Dotty structures (arrows) are frequently observed among amorphous electron-dense extracellular materials (black arrowheads) (C). Elongated, mature amyloid fibrils are also observed (white arrowheads). Circular structures with a diameter of 50 to 70 nm are collagen fibers. Scale bars = 0.2 μm.
An important issue tightly related to the contribution of wild-type TTR to the mechanisms of amyloid fibril formation is the truncation of TTR by proteases, such as trypsin and plasmin [48][49]. A large amount of C-terminal fragments of TTR, starting at positions around amino acid 50, have been found in the amyloid deposits of late-onset ATTR Val30Met amyloidosis cases and most ATTRv amyloidosis cases with non-Val30Met mutations, whereas N-terminal fragments are present in only small amounts [41][42][50]. C-terminal fragments are also present in the amyloid deposits of ATTRwt amyloidosis cases [45][50]. By contrast, amyloid deposits consist mainly of full-length TTR in early-onset Val30Met patients [41][50]. Importantly, truncated TTR resulting from proteolytic cleavage was shown in vitro to remain associated with the tetramer and was released only under certain circumstances, such as shear stress [51]. As organs liable to receive shear stress, such as the heart, ligaments, and tendons, tend to have amyloid deposits resulting from wild-type TTR deposition in elderly patients [52], TTR truncation may determine the sites of amyloid deposition, particularly in elderly patients. 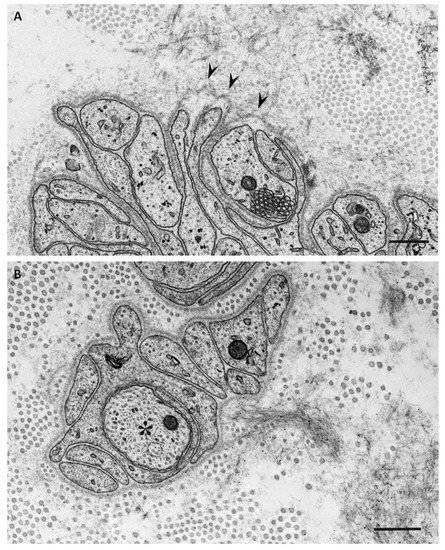 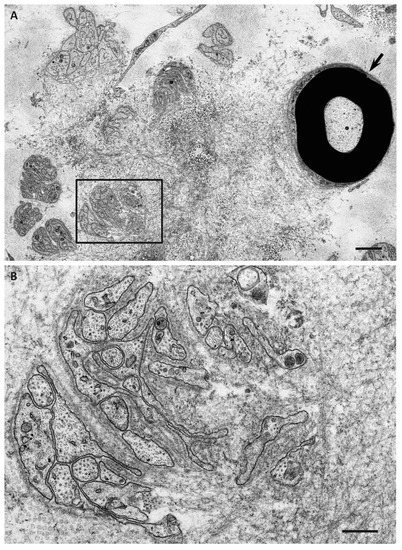