The ongoing ‘refugee crisis’ of the past years has led to the migration of refugee researchers (RRs) to European countries. Due to the COVID-19 pandemic, RRs often had to work from home and/or to continue their social, cultural and economic integration process under new conditions. An online survey carried out to explore the impact of the pandemic on the refugee researchers showed that RRs found it difficult to adapt their everyday working life to the ‘home’ setting. The majority have had neither a suitable work environment at home nor the appropriate technology. Although they stated that they are rather pleased with the measures taken by the public authorities, they expressed concern about their vulnerability due to their precarious contracts and the bureaucratic asylum procedures, as the pandemic has had a negative impact on these major issues. The majority of RRs working in academia seem not to have been affected at all as far as their income is concerned, while the majority of those employed in other sectors became unemployed during the pandemic (58%). Recommendations are provided to the public authorities and policy makers to assist RRs to mitigate the consequences of the pandemic on their life.

The outbreak of the Coronavirus disease COVID-19 has affected all the countries of the world, with 147 million infected and 3.1 million dead at the end of April 2021 [1]. Facing limited preparedness to control the spread of the virus, various governments adopted several public health strategies. The applied measures include enforcing complete or partial restrictions to financial and social activities, the so called “lockdowns”, restricting international travel, social distancing and the adoption of hygiene practices (masking, hand disinfection) [2]. Academic events such as conferences and meetings have been taking place online. Schools and universities closed and started to give classes online. Business activity was restricted.
The COVID-19 pandemic has affected significant aspects of economic and social life, forcing millions of people to working from home (WFH) [3]. Since the start of the pandemic, almost 85% of knowledge workers in Europe made a shift to the WFH practice [4], even though they used to spend more than 80% of their working time in a central office environment [5].
At the same time, Europe faced the so called “refugee crisis”, with 2.2 million arrivals in the period 2014–2020 in the South European countries and Germany to host almost half of the asylum seekers reaching Europe [6]. Scientists with academic and specialized knowledge (refugee researchers—RRs) who have left their country, seeking a safer life, have been trying to integrate into their host countries and continue their research careers[7][8].
RRs are a vulnerable part of the refugee community (very often waiting for asylum procedures to end). Due to the precarious nature of their research funding, they are strongly dependent on short-term scholarships or research grants that may have been expired during the pandemic, and many are without any financial support for their research, for instance, as they have been waiting for research funding applications to be evaluated. Moreover, RRs employed in industry or in the private sector are potentially in a more vulnerable position due to their generally less stable employment conditions and lower seniority on the job.

In this section, the results of the questionnaire survey are presented and analyzed. The main finding is that marital status, age and educational level do not play a substantial role in the income and the working status of RRs amidst COVID-19, given that all RRs are relatively well educated. The variable that exhibits the strongest effect of COVID-19 on income and employment status is the working sector, with those employed in the academic sector being the least affected by lockdown measures. In what follows, some descriptive statistics of the sample are presented and, subsequently, detailed results of the bivariate associations are given.
The first country of origin is Syria (37 respondents), followed by Afganistan (6), Palestine (3) and Lebanon (3) (Figure 1a). Generally, 95% of the participants come from Asian and Middle Eastern Countries. The hosting countries are Germany (24 respondents), followed by Greece (8), Syria (7), Hungary (6) and Lebanon (3) (Figure 1b). Generally, 40% of the participants are hosted in Germany. At this point, it should be noted that five refugees did not answer the questions regarding their country of origin and the hosting country, and, therefore, the aforementioned percentages (valid percent) correspond to a sample of 59 individuals. The majority of the participants are men (77%), and they hold a master’s degree (42.2%) or a PhD degree (18.8%) (Figure 2a). In total, 30.5% of the participants are students, 32.2% work in a research institute or at a university, 20.3% in a non-governmental organization (NGO) and, to a lesser extent, are entrepreneurs, self-employed, work in public administration or in the family business (Figure 2b). 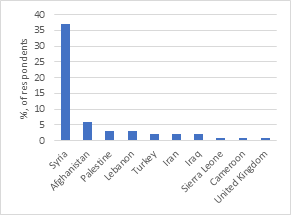 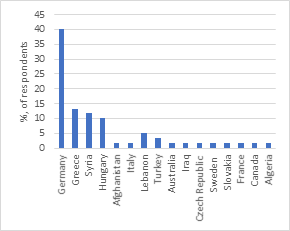 Figure 1. (a) Origin country of refugee researchers (RRs); (b) host country of RRs. 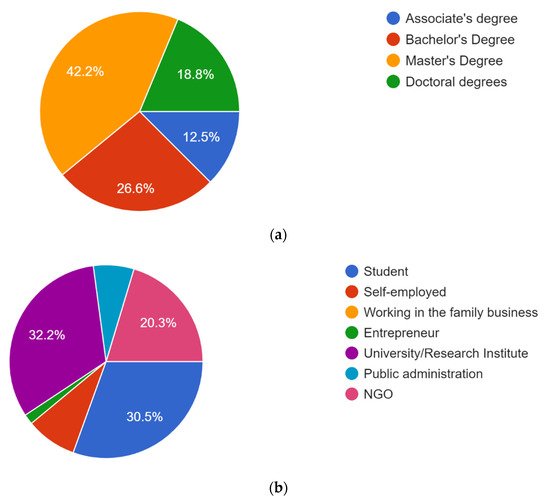 Figure 2. (a) RRs’ educational level; (b) RRs’ working sector.
The pandemic introduced changes in RRs’ lives with 40.6% of the participants declaring that their employment status was negatively and strongly affected, while only 22% were not affected at all. (Figure 3a) As far as their health is concerned, 15.6% stated that were strongly affected by the pandemic (Figure 3b). The participants’ level of uneasiness, interest and affection due to the current COVID-19 crisis on a 5-point Likert scale ranges from moderate (32.8%) to high (21.9%) up to very high (28.1%). Many lost their job, friends, family or feel uncomfortable to face the changes in their daily life. A large minority of the RRs face difficulties with coping with their income (46.9%). 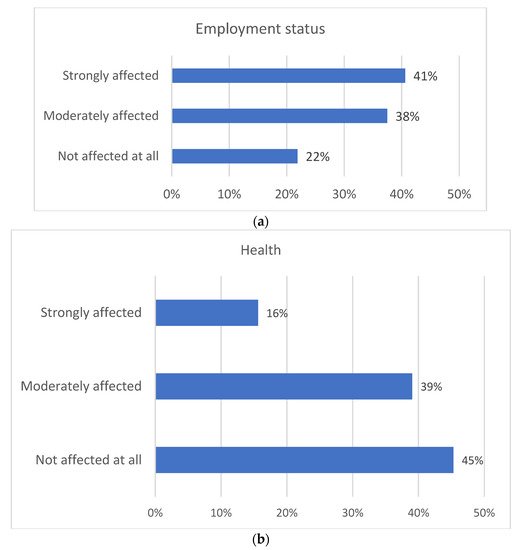 Figure 3. (a) Impact of the COVID-19 pandemic on RRs’ employment; (b) impact of the COVID-19 pandemic on RRs’ health. Source: online survey that took place between December 2020 and March 2021. N: 64.
The major challenges of the RRS to WFH are to deal with (a) lower productivity (56.3%); (b) the loss of feeling part of a physical team (45.3%); (c) keeping work and home life separate (42.2%) (Figure 4), since the majority of them (59.4%) do not have enough space to set up a home office for remote work. Other studies agree that researchers’ self-perceived productivity has been lowered during the lockdown [9]. As for the access to information technology devices, the majority of the respondents have had a personal computer (84.4%) as well as access to online collaboration software (60.9%), whereas a minority had a second display monitor (23.4%) or fast broadband speed (15.6%) (Figure 5).

Figure 4. The two most significant difficulties in working from home (WFH). Source: online survey that took place between December 2020 and March 2021. N: 64.

The socioeconomic and health consequences of the COVID-19 pandemic have increased RRs’ vulnerability, especially those found in asylum procedures. It was observed that RRs were greatly worried about the current health crisis, insecure about health protection and lacked resources to effectively WFH, in particular, through lack of working space and access to IT hardware and software. The decrease of income, the loss of employment and the difficulty with staying productive in working from home are important concerns.