Knee osteoarthritis (KOA) is a chronic multifactorial pathology and a current and essential challenge for public health, with a negative impact on the geriatric patient’s quality of life.

Knee osteoarthritis (KOA) is known as a chronic degenerative disease and a significant public health issue worldwide; the economic burden associated with it rises with population aging in most countries [1]. It is one of the prevalent causes of disability, extensively affecting patients’ quality of life [2]. Whereas KOA used to be considered a geriatric pathology, lately, it has been recorded among ever-younger patients [3]. Moreover, KOA prevalence has increased considerably in older adults (persons aged 60 and over) [4]. During the last decade, an increased number of newly diagnosed cases has been recorded [5]. In addition, by 2030, the number of arthroplasties is estimated to increase by 276% [6][7], while the number of specialty consults is expected to rise by 15.7% in 2032, compared to 2012 [8].
The role of oxidative stress in KOA physiopathology is still a topic of analysis. The effects of free radicals on cartilage components involve cellular senescence and apoptosis, while their existence is conditioned by endogenous or exogenous factors characterized by specific chemical and physical parameters. The most important chemical parameters determining or marking a particular physiological process are pH and the redox state. These parameters have different values as a function of the analyzed organ or tissue within the body, the living conditions, or the existence of certain pathologies [9][10].
Along with other risk factors, all these alterations favor the onset and progression of KOA and impose a series of blood tests enabling the identification of free radicals and serum antioxidants levels for tailoring a personalized therapeutic approach that could include sources of antioxidants. In this context, it is essential to develop appropriate strategies and identify the appropriate prevention solutions by discovering and reducing alterable risk factors [9]. For instance, weight control, active life, and a diet rich in antioxidants, as well as antioxidant therapies, are essential pillars of KOA prevention.

ROS comprise species with unpaired electrons, also called paramagnetic, such as free radicals, diamagnetic species with oxidant properties, or chemical species that (due to their higher energetic state) deactivate through an oxidative process. The most reactive ROS are those belonging to the class of free radicals, such as hydroxyl (HO•), alkoxide (RO•), superoxide (O2•−), and peroxyl (ROO•). The species with paired electrons represent another ROS class; often, they are the product of the reactions of species from the first category, namely hydrogen peroxide (H2O2), organic peroxide, ozone (O3), or charged species, such as singlet oxygen (1O2) and excited carbonyl (RCH = O*) [11]. Oxygen-free radicals are produced as a result of exposure to polluted air, ultraviolet radiation, tobacco, alcohol, and drugs. The primary endogenous sources are cellular enzymes, myeloperoxidases (MPO), lipoxygenases, nicotinamide adenine dinucleotide phosphate (NADPH) oxidase (NOX) [12], and xanthine oxidase [13].
The oxidative interface is the boundary between ROS and the signaling molecules they activate; it describes how ROS directly activate oxidative stress-responsive pathways [14][15].
The oxidative stress could be defined as an imbalance between the production and ROS accumulation at the cell level and cells’ capacity to inactivate them by using enzymatic reactions or other redox reactions [10][16]. Oxidative stress is the result of excessive production of ROS, which exceeds the capacity of the cellular antioxidant defense system to effectively remove them from the cells [14].
Antioxidants may be defined as reducing substances that oxidize, thus inhibiting another substrate’s oxidation. Through a more complex mechanism, they have a kinetic effect of slowing down the oxidation reaction [17].
Superoxide anion is considered the primary free radical molecule formed in living organisms through chemical and biochemical reactions. Molecular oxygen (O2) is converted into water at a mitochondrial level in the electron transport chain [18]. A small part of O2 is transformed into O2•−, which further generates different reactive species, such as HO• and H2O2; they produce other ROS by interacting with various organic molecules within the body. Frequently, superoxide radicals do not react directly with nucleic acids, carbohydrates, or polypeptides, determining the emergence of other reactive species, leading to oxidative processes [18][19]. In the human body, superoxide free radicals are inactivated under the actions of the superoxide dismutase enzyme (SOD), being converted into H2O2 within a two-phase chemical process [20][21].
Hydrogen peroxide is a regular metabolic product in the human body. When in higher quantities, it determines the production of HO• through Fenton-type reactions.
It is impossible to determine H2O2 concentrations accurately because of the many factors that cause variations. Still, the values in plasmatic blood are around 1–5 µM [22]. Low concentrations of H2O2 are part of normal, adaptive processes as a response to stress. By contrast, high concentrations are included in oxidative stress, determining inflammations, senescence, and even cellular apoptosis. Moreover, H2O2 could be inactivated in the human body by endogenous antioxidants, such as catalase (CAT) and glutathione (GSH), in the presence of GSH peroxidase (GPx) [20].
Hydroxyl radical represents one of the most important free radicals belonging to ROS species. This radical is extremely reactive, and it is the main cause of lipid peroxidation. One of the main pathways to generate this radical within the human body is represented by Fenton reactions in the presence of metals [23].
ROS are involved in several physiological cellular functions, serving as important cellular messengers in normal signal transduction, gene regulation, and cell cycling [24]. ROS-induced cell signaling involves two general mechanisms: alterations in the intracellular redox state and oxidative modification of proteins [25]. Cells respond to ROS in different ways depending on the redox status. Under physiological conditions, increased production of ROS triggers cellular defense, and the mechanism against oxidative stress is activated by effectively removing ROS molecules from the cell [26].
High ROS concentrations may influence the induction or aggravation of several pathologies (Figure 1), such as hypertension [27], cardiovascular diseases, diabetes mellitus (DM) and its complications [28], metabolic syndrome [28][29][30], cancer [31], neurodegenerative diseases [32], or DNA mutations [33]. 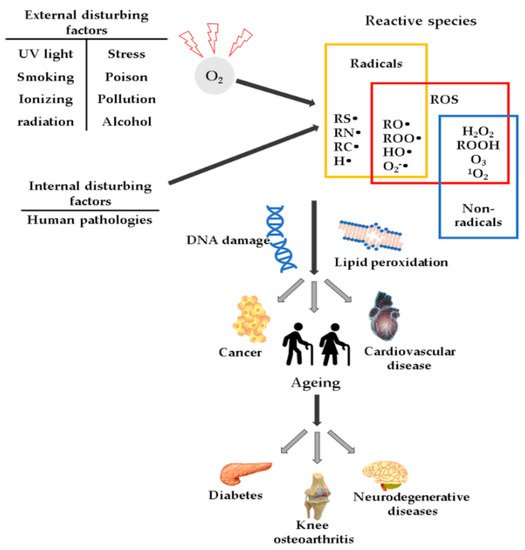 Figure 1. Schematic representation of ROS and their effects.

Antioxidants comprise several species that play a vital role in the suppression and prevention of free radicals, as well as in the neutralization of molecules with the potential of becoming free radicals. The human body controls the oxidative level through a series of enzymatic and nonenzymatic antioxidants [34].

The enzymatic cellular antioxidant defense system includes various classes of enzymes, such as SOD, CAT, and GPx. Enzymes act specifically by eliminating ROS or synergically by catalyzing the regeneration of other antioxidants [35].
SOD is a class of enzymes comprising three isoenzymes with localization in extracellular, mitochondrial, or cytoplasmatic components. They have been found in reduced amounts in the case of KOA, especially the type 2 and 3 isoenzymes [35][36]. They have a role in converting O2•− in O2 and H2O2, while higher serum levels of SOD are associated with lower general mortality rate among the feminine geriatric population [37].
CAT is an antioxidant enzyme with different localizations and a role in catalyzing H2O2 dismutation to water and oxygen. CAT plays an important role in H2O2 metabolism as a key regulator in maintaining cellular redox homeostasis [38]. Studies on lab animals have highlighted the antioxidant function of CAT, which increased the life span and reduced aging processes induced by oxidative stress [39]. Paradoxically, in the case of patients with KOA, the CAT serum level is high. Upon correlating all evidence, it may be stated that this is due to the compensating protective role of CAT [40]. Collins et al. [39] confirmed these effects of CAT at the level of human chondrocytes and lab animal cartilages. Their studies presented a CAT-induced mitochondrial expression by mitigating ROS-induced oxidation and hyperoxidation of peroxiredoxins. The targeted expression of mitochondrial CAT has a role in decreasing ROS, as it helps cell survival and reduces the severity of arthritic symptoms. CAT-induced effects included reduced severity of degenerative alterations and increased survival rate of chondrocytes.
GPx is an enzyme with an important role in the reduction of H2O2 and lipid peroxides [41]. This enzyme has four isoforms with different locations. Thus, classic GPx is found in most cells of the body; the gastrointestinal isoenzyme (GI-GPx) is located in the gastrointestinal tract and forms a barrier against hydroperoxides derived from the diet. Plasma GPx is located in the plasma, and phospholipid hydroperoxide GPx is located in the mitochondria and is considered a universal antioxidant enzyme that acts on lipids and lipoproteins damaged by free radicals [42]. Prx enzymes have an antioxidant role at the intracellular level, also regulating redox signaling events. Prx enzymes are present in all types of tissues, including cartilage, where they act as redox signaling agents for target proteins containing thiol groups, with high activity against H2O2 [43]. Prx may disrupt cellular signaling in older adults because of the increased sensitivity to hyperoxidation, inhibiting their function by increasing intracellular ROS levels. In older adults, the Prx isoforms 1–3 have higher activity in chondrocytes under conditions of oxidative stress, compared to younger people. These imbalances suggest a phenotype typical of geriatric patients’ tissues [39].

GSH- is an antioxidant of endogenous source; it is a tripeptide comprising amino acids such as glycine, L-glutamic acid, or L-cysteine [44]. It is found intracellularly in mitochondria and peroxisomes and has a role in preventing ROS-induced cellular degradation, which it can eliminate through enzymatic or nonenzymatic reactions. These reactions involve GPx, glutathione-S transferase (GST), glutathione reductase (GR), and modulations of the tertiary protein structure. In the cytoplasm, GSH is coupled to SOD and ensures the protection of subcellular structures against oxidative stress. The modifications of GSH concentrations lead to cell senescence and apoptosis through alterations of their proliferation and the detoxifying and enzymatic transcription processes [45][46].
Carotenoids are terpenoid pigments and are found in vegetables, fruits, shellfish, eggs, and meat. They are detected in the human body, and the most common isoforms are β-carotene, α-carotene, lutein, or lycopene [47]. Carotenoids have antioxidant effects and inhibit the activation of nuclear factor kappa-light-chain enhancer of activated B cells (NF-kB), interleukin (IL) -6, and tumor necrosis factor-alpha (TNF-α). β-Carotene reacts with ROO•, OH•, and O2•− [48]. Vitamin C is an important nonenzymatic antioxidant that helps reduce free radical damage. Recent studies have shown that vitamin C can have beneficial effects in patients with early KOA [49]. There are two isoforms of vitamin C transporters that are sodium dependent. At the level of articular cartilages, transporter 2 is mainly expressed, which is significantly altered in KOA grade III, compared to KOA grade I [50]. Vitamin C also acts as a biological modulator in immune cells; it is involved in the synthesis of collagen and catecholamines, and there is evidence that the administration of high doses of vitamin C improves body function and the survival of critically ill patients [51]. Vitamin E is a powerful antioxidant that has a potential preventive or curative role in KOA, due to its antioxidant and anti-inflammatory properties [52]. The antioxidant activity of vitamin E is due to the release of hydrogen from the hydroxyl group on the chromanol ring [53]. Vitamin E is a group of compounds, including tocopherols and tocotrienols, with alpha-, beta-, gamma-, and delta isoforms [54], of which alpha-tocopherol is the most important one [55]. Alpha-tocopherol can have both antioxidant and pro-oxidant effects when present in high doses by acting on vitamin K at the bone level and could block other types of vitamin E isomers [55]. Previous studies have demonstrated that the antioxidant activity of tocotrienol is superior to that of alpha-tocopherol [56][57]. Coenzyme Q10 is a coenzyme for mitochondrial enzymes involved in the electron transport chain and has a role in adenosine triphosphate (ATP) synthesis. It has an antioxidant effect by inhibiting the peroxidation of plasma lipoproteins and lipids of cell membranes, but its anti-inflammatory effects have also been highlighted. The antioxidative and anti-inflammatory effects have been demonstrated in animal studies when it was observed that the oxidative stress was reduced and the histological score of the cartilages affected by KOA was improved [58][59].