Periodontal diseases are worldwide health problems that negatively affect the lifestyle of many people. The long-term effect of the classical treatments, including the mechanical removal of bacterial plaque, is not effective enough, causing the scientific world to find other alternatives.

In the last 30 years, the field of controlled drug delivery systems, particularly the study of polymers as drug carriers, has received great interest. The polymer acts either as a support by protecting the bioactive agent during its transfer through the body until release or by its properties controlling the release kinetics. Such a controlled release system contains the bioactive principle loaded into the polymeric matrix or chemically bound (ionic, covalent) to the base chain, being administered orally, parenterally, transdermally, or surgically implanted in the body [1]. The drug will then be released at the site of the disease by diffusion, by hydrolysis of the chemical bonds between it and the support, or by erosion of the surface of the polymeric matrix [2].

The polymeric matrix must have an optimal combination of binding properties for compounds that work in or in contact with the human body, which makes biopolymers (proteins, polysaccharides) ideal candidates. Although the mechanisms of action of the release systems thus obtained are not yet fully elucidated and their technologies are not yet optimized, the results of some clinical experiments attest to the special value of some natural macromolecular compounds, and to a lesser extent of synthetic polymers, as adjuvants for the conditioning and immobilization of biologically active substances.

The main constraints that a polymer for bio-applications must meet are the (i) biocompatible and biodegradable. This assumes that the polymer must degrade in vivo into compounds that are easily eliminated from the body. Otherwise, the polymeric system must be surgically removed after completely or almost completely releasing the drug. (ii) The degradation products must be non-toxic and not create an inflammatory response in the body. (iii) Degradation of the polymer must occur within a reasonable period of time. In addition to these constraints, the choice of polymeric matrix also takes into account several criteria: (i) Molecular weight and polydispersity of molar masses. (ii) Basic chain geometry: linearity or cyclicity, branching, reticulation, etc. (iii) The chemical nature of the polymer, such as its chemical composition, aqueous solubility, and ionic charge. (iv) The polymer–drug relationship, such as the type of chemical bond that the partners can form (covalent, ionic, or coordinative); the physical interactions between partners, if no chemical bonds are involved; location of the pharmacologically active agent in the polymer (per chain, as a substituent, or included in the matrix). (v) The stereochemical phenomena.

The mentioned restrictions are fulfilled by few synthetic polymers, but mostly by biopolymers. Of this large category, the most used are polysaccharides and proteins; this review focuses only on polysaccharides and their derivatives. Given the specific diseases of the oral cavity, among which periodontal disease ranks first, the classes of drugs associated with different types of polysaccharide-based supports are those with anti-inflammatory and antimicrobial action on the microbial flora that causes periodontitis.

Numerous forms of the presentation of polymer–drug systems are currently known, these being chosen depending on the nature of the disease, the administration mode, the type of polymer used, etc. One of them is hydrogels (in the form of films, micro-/nanoparticles, implants, etc.), in which the drug can be included, encapsulated, or adsorbed on the surface. Another possibility is the direct association of the biologically active compound with the polymer chains by covalent or ionic binding (polymer–drug conjugates).

The literature abounds with a huge amount of articles dealing with the problem of classifying polymer–drug systems according to the way partners associate, how they are formulated, how they respond to external stimuli, the nature of the support polymer, the mechanism and kinetics of the release process, etc. This review will not refer to these aspects but will only investigate the polymer–drug systems with applications in the treatment of periodontitis.

Apart from trauma produced by injuries, the most common diseases of the oral cavity are tooth decay, periodontal disease, oral infections, and cancer. It is estimated, for example, that approximately 48% of the US adult population is affected by periodontitis, but similar results have been reported in other countries. Periodontitis is therefore a chronic inflammatory disease of the periodontal tissue caused by pathogenic microorganisms and characterized by the destruction of the supporting structures of the teeth [3]. The inflammation is first located in the gum but then penetrates deep and in the absence of treatment creates bags colonized by anaerobic bacteria that erode the supporting ligaments of the tooth until it is lost; the progress of the inflamed bags can take several years. Several inflammatory and degenerative stages of the tissue surrounding the tooth are highlighted, the gum, periodontal ligaments, enamel, and alveolar bone being affected in turn; these stages in the evolution of the disease are suggestively presented in Figure 1 [4]. 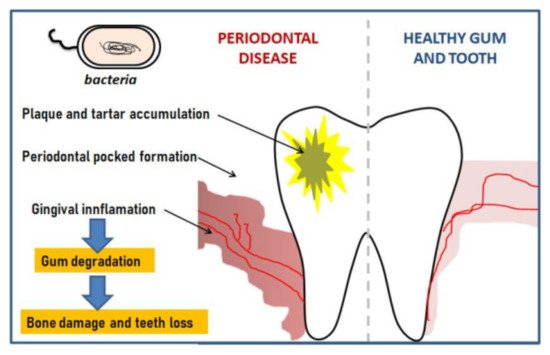 Figure 1. Schematic illustration of the stages of evolution of periodontal disease. Reprinted from ref. [4].
The understanding of the etiology and pathogenesis of periodontal disease has made significant progress in recent decades. In all forms of the disease, the strength of the microbial attack depends on the virulence of the microorganisms, the amount and composition of the bacterial plaque, their ability to invade the tissues, and their metabolic products [5]. The periodontal microbiota is a complex community of microorganisms, many of which are still difficult to isolate in the laboratory [6][7][8][9].
Many species function as pathogens, and those that function as pathogens in a site may exist in small amounts and in healthy sites. Bacterial accumulations cause vascular changes typical of inflammatory reactions, the result of a loss of vascular fluid and the migration of polymorphonuclear leukocytes from blood vessels into tissues and gingival sulcus. There are also early losses of apical collagen from the junction epithelium that begin during the time the bacterial plaque is deposited. The stage of chronic gingivitis is installed but limited to the tissues located very close to the sulcular and junctional epithelium. The supragingival plaque, if left to grow normally, accumulates and will cause gingival inflammation with the appearance of tissue products that serve as nutrients for Gram-negative anaerobes. At the same time, inflammation together with bacterial enzymes open a gateway to the tissue of high molecular weight products from bacteria that penetrate tissues, ultimately causing periodontal disease.
Among the bacteria that activate the destructive processes of the host tissues, the most important are: Porphyromonas gingivalis, some types of Prevotella intermedia, Tannerella forsythia, Aggregatibacter actinomycetemcomitans, Fusobacterium nucleatum, etc. [5].
Periodontal disease refers to all pathological manifestations with a multifactorial etiology, which appear as a consequence of interactions between microbial factors (determinants) and those of the host but also possible environmental influences (favorable factors) that affect the supporting periodontium and lead to tissue destruction, the experience of chronic evolution (with periods of activity and inactivity), and the requirement of a complex and long-term treatment [10][11]. It is characterized by gingival inflammation, the formation of periodontal pockets, and the destruction of the periodontal ligament and alveolar bone, as well as by the mobilization of teeth [12].

2. The Prevention of Periodontal Disease

In fact, the prevention of periodontal disease is very important, and the best way is to remove its causes, which is the formation of bacterial plaque. Treatment often involves the systemic administration of the free drug, with the effectiveness of the treatment being reduced as the concentration of the active principle decreases rapidly over time to the sub-therapeutic level, when a new dose is required. The trend of recent years in the treatment of this disease has shifted to the local release of antibiotics, antimicrobials, and anti-inflammatory drugs, and this is through the local administration of drug delivery systems. An ideal system of this type consists of a biodegradable, bioadhesive support, based on natural and rarely synthetic polymers, capable of releasing the active principle relatively controlled and for as long as possible. Several types of such systems were investigated to date, such as electrospun fibers, tapes, inserts/implants, films, gels, hydrogels, polymer–drug conjugates, dendrimers, micelles, nanocapsules, micro- and nano-spheres, and particularly micro-/nano-capsules and liposomes.
Local administration has a number of apparent advantages over the systemic one, directly targeting the affected area, but even in this case repeated doses of the active ingredient are required to maintain a relatively constant concentration of the active ingredient, minimizing systemic side effects [13][14]. The most common formulations for local use in buccal cavity are semi-solid or liquid, especially because they are both easy to administer and borne by the patient. However, the disadvantage is the poor retention in the oral cavity, and, therefore, the achievement of a therapeutic effect is far below the optimal one. As a result, ways have been sought to solve these disadvantages, one of which is the association with polymers [15]. The use of a local system of release of the drug when placed in the periodontal pocket allows—and, therefore, maintains—a high and relatively constant concentration in time of the drug, which is more difficult to remove by salivary secretion and, therefore, cannot be swallowed by the patient, as well as preventing unwanted side effects that the free drug can generate [16].