Ochratoxins (OTs) are a group of mycotoxins produced by different Penicillium and Aspergillus molds that contaminate crops in the field [1]. These toxins are derivatives of an isocoumarin moiety linked to phenylalanine by an amide bond (Figure 1) [2].

In wines, OTA is the most studied mycotoxin, and the European Commission (by regulation 1881/2006) established as the maximum tolerable level in wines destined for human consumption a concentration of 2 µg kg−1[3]. Contamination can be produced from the early stages of the colonization of mycotoxigenic fungi in grapes to the final steps in the wine packaging process. However, the primary contamination of the finished product comes from the carryover of mycotoxins from grapes [4][5]. In addition, the winemaking process strongly influences the OTA content, since higher concentrations have been reported in red wines than in rosé and white wines in general [6].

The contamination of wines with ochratoxins should raise a tremendous public health alert worldwide for frequent drinkers since these toxins can cause acute to chronic poisoning. The latter is associated with the cumulative effect of these toxins in various organs when they are ingested constantly over a long time and can cause the occurrence of chronic complications such as cancer, immunological alterations, nephropathies, neurotoxicity, and hepatotoxicity, among others [9].

The presence of OTA in wines has been reviewed by several authors [6][10][11]; however, most of these publications covered reports only until 2012. Considering the risk of contamination by ochratoxins and the long-term health problems they can cause, this review aims to analyze the presence of ochratoxins in wines reported in the last 10 years, explore how the winemaking process influences the degree of contamination, and examine the associated toxicity in terms of the risk of human exposure from the consumption of contaminated wines.

2. Occurrence of Ochratoxins in Wines

OTA structurally consists of a p-chlorophenolic group linked to a dihydroisocoumarin fragment linked by an amide bond to an L-phenylalanine (Figure 1) [12]. 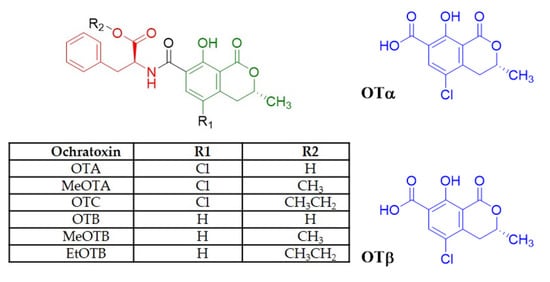 According to some research, OTA contamination occurs when grapes are still on the vine, during the ripening period when fungal infections are more active [13][14]. Aspergillus carbonarius, A. ochraceus, A. niger, Penicillium verrucosum, and P. nordicumare the main fungal species responsible for producing this toxin in grapes [15], with Aspergillus species being more frequent [16]. The grape harvesting process is critical in terms of contamination with mycotoxigenic fungi, especially if there is a lack of cleanliness of the tools and containers used. Similarly, contamination of grapes can also occur during transport to the winery, during storage, or because of careless handling by staff, since the skin of these fruits is thin and can be easily injured, allowing colonization and development of mycotoxigenic fungal species [17].

In the crushing step, grapes are broken to extract the juice. When grapes contain OTA (in their pulp and/or skin), the toxin will be transferred to the must [6].

For red wines, the maceration process is then carried out. During this stage, there can be increased OTA content (about 20%) [18] because of the long contact between grape skins and must, which favors the solubility and diffusion of this mycotoxin from contaminated skins [19]. On the other hand, the absence of maceration for white and rosé wines seems to be a critical factor contributing to low OTA levels in these wines [11].

OTA adsorption can be carried by yeast cell walls (composed of mannoproteins and β-glucans) [21]. It was shown that chitin, β-glucan, and their hydrolysates could remove 64 to 74% of OTA from contaminated wine [22]. A similar process occurs during malolactic fermentation, which involves lactic acid bacteria (LAB) [23]. OTA removal for LAB would be in the form of adsorption to cellular components such as exopolysaccharides and peptidoglycans [18][24].

A 54% reduction in OTA content has been seen in wines stored for 5 months [6], and OTA concentrations in red wine stored at room temperature for 55 days and 80 days showed decreases of 8 and 10%, respectively [25]. The OTA reduction in wine after storage and drainage is due to the precipitation of solid particles from the remains of pulp, skin, and yeast, and dead bacteria, which form the lees [6]. This could be due to the wine sedimentation process, which contributes to further reduction of OTA content [10][26].

After clarification with gelatin in the macro-vinification process, there was evidence of a decrease in toxin content by around 58%. On the other hand, using a mixture of gelatin and bentonite, the concentration of OTA does not decrease significantly [6]. Other clarifying agents, such as oenological carbon and bentonite, have been shown to reduce the OTA concentration in wine [27][28]. However, the fining agent concentration, the chemical nature of the wine components, the OTA concentration, and the adsorption capacity of other elements present in the wine must be considered.

Finally, throughout the winemaking process, evidence shows that OTA levels can be decreased. Recently, a new scenario was raised, in which a third of the reduction may be related to the degradation of OTA or transformation into modified mycotoxins during the fermentation process [8].

The presence of OTA in wine was first reported in 1996 in Switzerland [29]. Since that first report, this mycotoxin has been described in different wines on several countries worldwide. Among the reports that most attract attention is one in which 100 samples of wine produced in Portugal, Spain, and Italy were analyzed. The interesting thing about this study is that the year of production varied from 1984 to 2017, and interestingly, the contaminated samples were from wine made in recent years, two red wines in Portugal in 2016, one red wine in Lisbon in 2016, and one in Italy in 2015.

Another work that draws attention is a recent study that analyzed 113 bottled wines from the 2011 to 2016 vintages. Of the total wines evaluated, 64% of red wines had at least traces of OTA, while the percentages of white and rosé wines were considerably lower (42.6 and 36.4%, respectively). Regarding the harvest year, the occurrence of OTA varied markedly. The samples with the highest levels of contamination were from the 2014 and 2015 harvests (71.0 and 86.7%, respectively) [30].

It is essential to have these data because of the increased OTA in wines after 2014 [31][30], which, according to some researchers, maybe due to the consequences of climate change.

The alcoholic and acidic nature of wine allow carboxylic acid transformation to an ethanolic ester in OTA [29]. Furthermore, the acidic conditions of the matrix may favor the ionization of the amino group of the OTA molecule. Along with this, acids can favor esterification reactions (addition of methyl and ethyl groups). Furthermore, during the alcoholic fermentation process, the enzymes produced by the yeasts present can modify OTA. Saccharomyces cerevisiae has been shown to produce glucosidases, pectinases, and xylanases that can act on the hydrolysis of OTA [8].

The first report of co-occurrence of OTA with OTC in wines was in 1996, estimating that the OTC concentration was approximately 10% of the OTA concentration (Table 1) [29]. Subsequently, in 2010, it was reported that 100% of red wines purchased from Spain presented co-occurring OTA and OTB although at low levels, and none of them exceeded the maximum level of OTA permitted by legislation. Additionally, it was reported that 60% of the samples presented three ochratoxins (eight showed OTA, OTB, and OTC, and four, OTA, OTB, and MeOTA) [32].

OTA, OTB, MeOTA, MeOTB, OTC, and EtOTB were reported in 51 red wines from Spain, corroborating previously published data, with levels of OTA and OTB detected in all wines. Another study reported that all wines obtained in the Mediterranean were contaminated with OTB, 89.6% with OTC, 62.5% with MeOTA, 83.3% with MeOTB, and 83% with EtOTB. It has been reported that the presence of OTC in wine is mainly due to the hydrolysis of OTA [33]. Therefore, ochratoxin intake from wine can be underestimated when only assessed by OTA analysis.

3. Toxicity of Ochratoxins and Risk of Exposure through the Consumption of Contaminated Wine

For humans, the ingestion of mycotoxins constitutes a danger, as they have been linked to mutagenicity and to estrogenic, gastrointestinal, urogenital, vascular, renal, nervous, and immunosuppressive disorders [34]. Among their most alarming characteristics is their cumulative effect over time, representing a triggering factor in several types of cancer [35][36]. This molecule has been mainly associated with a nephrotoxic effect, as observed in Balkan endemic nephropathy (BEN), caused by the bioaccumulation of OTA in the renal parenchyma [37][38]. Other effects attributed to this mycotoxin are teratogenesis, immunotoxicity, genotoxicity, mutagenicity, and oncogenicity [38].

Contrary to what happens in the small intestine, particularly between the duodenum and the jejunum, which is where more significant amounts of OTA are absorbed, because the evacuation of alimentary chyme is slow, the membranes in this anatomical area are more permeable, which facilitates the absorption of this mycotoxin [39][40]. Another variable that is strongly involved in absorption is the pH of this mycotoxin. (monoanionic form) and 7.2 to 7.4 (dianionic form); absorption of OTA, according to the physiological pH found in the stomach and small intestine (ranging from 1.5 to 2.5 and 6.1 to 7.8, respectively) occurs in its non-anionic and monoanionic forms [38]. It is important to note that when this mycotoxin is absorbed through the small intestine, it can affect the integrity of the walls, causing inflammation and intestinal disorders [41].

When the binding of OTA to albumin occurs, it is brought to different tissues [42]. OTA is metabolized very slowly in humans, with a half-life of more than 30 days [43][44], producing a cumulative effect leading to cell damage in different organs [44]. The main organs and tissues targeted by OTA are the kidneys, liver, skeletal muscle, adipocytes, and brain [38][39].

Due to all of these contraindications, the International Agency for Research on Cancer (IARC) in 1993 classified OTA in group 2B as a possible carcinogen for humans, which means that there is some evidence that it can cause cancer in humans, but so far, it is not conclusive [45]. However, currently, it is considered that there should be a change in this classification, since investigations carried out with experimental animals during the last 20 years confirm that this mycotoxin is carcinogenic, nephrotoxic, and genotoxic and is also associated with gallbladder cancer due to the consumption of contaminated food [46].

When OTA is ingested, it can undergo biotransformations (Figure 2). OTA is hydrolyzed to OTα by the action of proteolytic enzymes and enzymes of bacterial microflora in the intestine. that under alkaline conditions results in forming a highly toxic compound called open OTA with lactone (OP-OTA). Likewise, 4-hydroxyochratoxin A (4-OH-OTA) is a product of OTA oxidation, which is a compound with low toxicity, while another less toxic product is 10-hydroxyochratoxin A 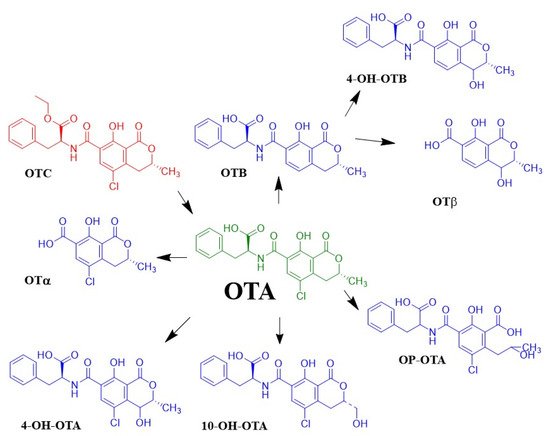 In addition, the formation of other metabolites derived from the biotransformation of OTA has been observed in other species, such as OTB, and the result of the conjugation of OTA with compounds such as sulfate, glucuronide acid, hexose/pentose (hex/pen-OTA), and glutathione, among others. The production of these metabolites is essential to consider because they can interact with other molecules, leading to more toxic molecules. Ochratoxin C is a potentially toxic compound. It has been concluded that ochratoxin C is readily converted to ochratoxin A after either oral or intravenous administration

It is also important to note that the total consumption of OTA in the daily diet depends on all the products ingested containing this mycotoxin. Exposure to OTA through food intake can be measured in biological fluids using mycotoxin biomarkers. In addition, measuring urinary mycotoxin biomarkers is an effective alternative to measuring exposure to mycotoxins, given that the excretion of biomarkers correlates well with mycotoxin intake [47]. In this regard, a human biomonitoring study performed on the Belgian population revealed that, among 33 mycotoxins analyzed, OTA was one of the most frequently detected in urine samples, indicating a high prevalence of OTA exposure in adults and children in this population associated with food consumption, suggesting the presence of urinary mycotoxin as a valuable biomarker for assessing OTA exposure [48].