The silver nanoparticles (AgNPs) have been shown to have bactericidal action. In this study, we demonstrated that ultraviolet A (UVA) irradiation of AgNPs is effective at enhancing their activity. This bactericidal effect is attributable to the UV irradiation-mediated enhanced production of highly reactive hydroxyl radicals generated from AgNPs. The method of UV irradiation is very simple. The UV radiation used in this study was UVA, which is safer for humans than UVC as known to have a strong bactericidal activity. Although challenges persist regarding the effects of AgNPs on human health and the elucidation of the molecular mechanisms underlying the generation of radicals, our findings would contribute to the development of medical materials for further protection against infection.

1. Silver nanoparticles and Type of UV using in This Study

The AgNPs used in this study were prepared as previously reported [1]. The resulting AgNPs had the same characteristics as those obtained in our previous experiments (maximum absorption at 390 nm, and particle sizes were ~5 nm [2][3][4][5]. To produce UV radiation, we used a universal handy-type UV lamp that was able to generate has a wavelength of 365 nm, putting it in the range of UVA (320 to 400 nm), which is safer than other types of UV radiation (i.e., UVC and UVB). UVB (280 to 320 nm) can cause a variety of damaging effects in various biological cells, whereas UVC (200 to 280 nm) is very hazardous to most organisms [6][7]. 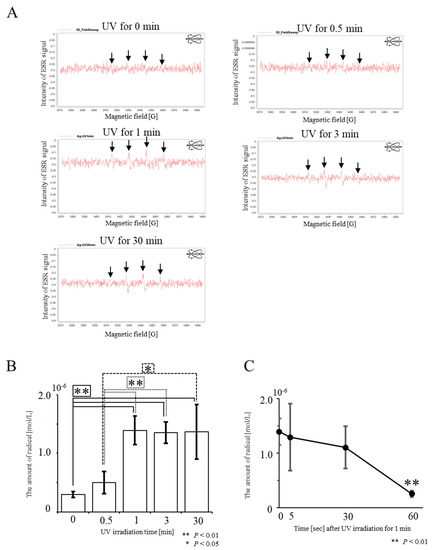 There are several possible mechanisms underlying the generation of hydroxyl radicals induced by UV irradiation of AgNPs. An surface plasmon resonance-mediated collective oscillation of conduction electrons may be generated on the surface of UV-irradiated AgNPs, leading to local generation of an enhanced electric field. Homolytic cleavage, a process in which the covalent bonds of water surrounding AgNPs are broken, may occur in response to the collective oscillation of conduction electrons, resulting in the generation of unpaired electrons as well as radicals. Unfortunately, the current results do not support this hypothesis, and further analysis is required to elucidate the mechanism of action.

Some reports claim that AgNPs yield reactive oxygen species, which act as oxidative stressors to kill various types of bacteria [8][9][10][11]. However, these reports appear to rely on the indirect action of Ag, in which antibacterial activity might be elicited through oxidized peripheral substances or modified materials. Electron paramagnetic resonance spectroscopy is considered one of the standard methods for the quantification of ROS; however, the equipment is very expensive. To our knowledge, there has only been one report indicating that this equipment is useful to detect radicals [12]. In this study, we demonstrated the usefulness of an EPR spectroscopy-based direct detection approach. Our present study differs from the experiments of Zhang et al. [12], who explored the mechanism by which ROS exerts microbicidal activity. We observed a 1.7-fold enhanced production of hydroxyl radicals when AgNPs were irradiated for 0.5 min, and 4.5-fold enhanced production when AgNPs were UV-irradiated for 1 min (Figure 1B). The increased levels of hydroxyl radicals should reflect enhanced microbicidal activity of AgNPs.

We investigated whether UV-irradiated AgNPs inhibit the survival of the bacterium E. coli. Experiments were carried out using two approaches: In the first set of experiments, solutions containing AgNPs were UV-irradiated, and then mixed with E. coli prior to seeding onto agar plates (Figure 2). In the second approach, agar plates that had their surface coated with AgNPs were irradiated with UV and plated with E. coil (Figure 3).

Figure 2. Bactericidal effects of UV-irradiated AgNPs on the survival of E. coli. (A) Appearance of E. coli colonies on agar plates after overnight incubation at 37 °C. Aqueous solutions of PBS or solutions containing AgNPs were subjected to UV irradiation for 0, 1, or 3 min, then each solution was mixed with E. coli prior to plating on agar plates. (B) Quantitation of colony numbers in each group. In the control PBS groups, shown as white columns, there was no difference in the survival of E. coli with or without UV irradiation. In the experimental groups, shown as gray columns, there was a slight decrease in the number of colonies after incubation with non-UV-irradiated AgNPs (designated as “UV for 0 min”). A significant decrease in the number of colonies was observed when E. coli were incubated with AgNPs UV-irradiated for one or three min, designated as “UV for 1 min” and “UV for 3 min”, respectively. Experiments were repeated three times on different days.

The UV radiation used in this study was produced by a universal handy-type UV lamp capable of generating UV of 365 nm, which is within the range of UVA (320 to 400 nm) and is safer than other types of rays such as UVC (200 to 280 nm). UVC is highly biotoxic, in addition to its strong bactericidal action. In contrast, UVA is not only known to be involved in reducing skin elasticity and promoting aging, but also facilitates the exchange of intracellular substances, leading to promotion of cell’s metabolism. Ninety-nine percent of UV rays reaching the earth’s surface from the sun are UVA. This is advantageous, especially when people wearing AgNP-coated protective clothing and medical masks continue to work outside without removing the clothes or masks, because their sterility can be maintained. This UV-enhanced AgNP-based microbicidal system is also useful for protecting against infection in case of occasional unintended contact when healthcare workers change clothes [13]. For the practical use of AgNPs, biosafety issues and environmental safety concerning AgNPs have been a subject for discussion. Hydroxyl radicals, renowned as powerful oxidizing agents, are likely to be effective against viruses, bacteria, and in the degradation of chemicals. Therefore, our system may be valuable for the protection of healthcare workers from infection with pathogens such as COVID-19 and SARS, and in the prevention of outbreaks of similar diseases.

How to evaluate the antibacterial properties of Ag NPs?