Heart failure (HF) is one of the major causes of morbidity and mortality worldwide and represents an escalating problem for healthcare system. Therefore, it would be of utmost importance to identify asymptomatic individuals with left ventricular dysfunction before the onset of symptoms. Furthermore, special attention should be focused on individuals who are already classified as NIHA I and "apparently healed" patients, who have been diagnosed with HF and whose clinical condition is stable thanks to therapy. These patients usually suffer from a worsening of their condition over time, and therefore recognizing these changes at the onset would be a great achievement.

Despite the progress made in the field of cardiology in terms of treatment and personalized therapy, heart failure (HF) remains one of the leading causes of morbidity and mortality [1]. Unfortunately, the diagnosis of HF in asymptomatic subjects is challenging and therefore delayed until overt HF [2].

Moreover, individuals classified as New York Heart Association (NYHA) I and “apparently healed” patients over time experience a progressive worsening of their condition, therefore the prompt identification of the ongoing pathophysiological processes is of the utmost importance as well. NYHA I cohort represents the patients already diagnosed with HF in the absence of symptoms or limitations in their physical activity. The term “apparently healed” patients refers to subjects diagnosed with HF whose clinical conditions improved due to pharmacological therapy. Among “apparently healed” patients diagnosed with idiopathic dilated cardiomyopathy (DCM), it has been observed that recovery is only temporary [1] and symptoms may recur with discontinuation of therapy [3]. Given that even with therapy adherence, the patient condition tends to worsen over time after initial stabilization, careful monitoring should be mandatory [1][4].
In addition, given the fact that myocardial infarction (MI) remains the main cause of HF and that only about  25% of patients hospitalized for MI show signs or symptoms of HF, recognition of the biomarkers capable of identifying early asymptomatic left ventricular (LV) dysfunction is of utmost importance as well [5].
Therefore, further studies are needed to determine the expression levels of novel biomarkers in order to estimate their cut-offs in the general population and identify their dynamic changes linked to the pathophysiological processes that could lead to the increased probability of HF development. These findings would certainly create an opportunity for new therapeutic approaches and improve advances toward personalized medicine [6]. In addition, identifying biomarkers with the ability to distinguish recovery from complete remission among the “apparent healing” cohort would be a tremendous achievement.

Traditional biomarkers such as natriuretic peptides (NPs) are widely in use in the HF settings recommended by European HF guidelines and The American College of Cardiology guidelines, being able to rapidly confirm or exclude cardiac origin and distinguish patients requiring further clinical investigation, from those who do not (Figure 1) [7][8]. Suggested cut-off values for ruling in HF for B-type or brain natriuretic peptide (BNP)  and N-terminal pro-B-type natriuretic peptide (NT-proBNP) are above 100 pg/mL and 300 pg/mL, respectively [9]. Although NPs are mainly used as diagnostic and prognostic tools in overt HF, their concertation values are informative in asymptomatic HF settings as well.  Higher values of BNP, NT-proBNP and atrial natriuretic peptide (ANP) have been observed among asymptomatic individuals with HF in comparison with healthy controls, however still lower than in symptomatic HF [10]. Worth mentioning, different factors such as age, gender, body mass index, the presence of other morbidities such as pulmonary or renal diseases could influence NPs concentration levels [4]. 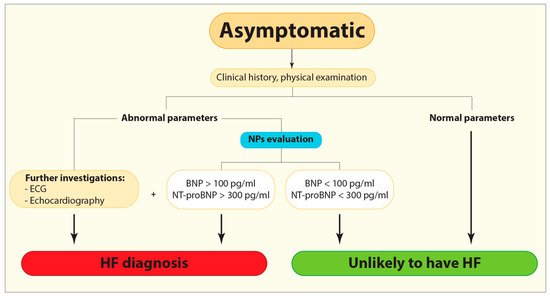 Cardiac troponin is the gold biomarker for diagnosis of acute myocardial infarction (AMI) and its elevated levels are present in patients with acute and chronic HF as well,  indicating the ongoing myocardial damage [9][11]. Troponin levels may be elevated regardless of the ischemic etiology of myocardial injury due to different causes such as LV hypertrophy, hypertension, diabetes mellitus, metabolic syndromes, hypercholesterolemia, and genetics, so its detection in the general population has aroused interest in this marker as an indicator of myocardial injury in asymptomatic individuals [12][13][14]. However, defining the cut-offs among asymptomatic individuals might be challenging since different factors significantly affect troponin levels such as age, gender, body mass index, systolic pressure, diabetes mellitus, severe pulmonary infections and renal failure [12][13][15][16].

Emerging biomarkers such as soluble suppression of tumorigenicity 2 (sST2), galectin-3 (Gal-3) and ghrelin reflect different pathophysiological processes closely associated with fibrosis [12]. Even though the diagnostic potential of these relatively new biomarkers is still lower compared to NPs, their prognostic power proved to be very useful during patient’s follow-up. The American College of Cardiology guidelines, besides a strong recommendation of the use of NPs, has already suggested a multimarker approach since these emerging biomarkers could provide additional diagnostic information to the traditional biomarkers, as well as help regarding risk stratification [8].

sST2 levels have been found to be significantly higher in patients with HF compared to healthy controls and associated with disease severity and adverse outcome [12]. Moreover, sST2 measurements in the general population pointed out that some asymptomatic individuals have higher levels of sST2, indicating the existence of undergoing processes that could lead over time to negative outcomes [17]. The advantage of sST2 as a biomarker is its lower biological variation compared to NPs [18][19]. Furthermore, van Vark et al. demonstrated that the increased levels of sST2 can be observed several weeks before a cardiac event, making sST2 a suitable marker for the follow-up of patients with HF [18].

Elevated levels of Gal-3 have been detected in patients with LV remodeling and diastolic dysfunction [20]. Huttin et al. demonstrated a significant association between Gal-3 and fibrosis at a very early stage of cardiac changes [21]. However, the use of Gal-3 as a biomarker for asymptomatic LV dysfunction is still debated, mainly due to its low specificity and the fact that its concentration levels could be altered due to inflammation and fibrotic processes in organs other than the heart [22].

Finally, ghrelin, primarily recognized as a gastric peptide, is expressed in the heart, although at a much lower level than in the gastrointestinal tract [23][24]. Given its cardioprotective role against apoptosis and myocardial fibrosis [24], ghrelin and its receptor have become the subject of intensive studies. It has been noted that the interaction between ghrelin and its receptor differs between the early and late phases of HF [24] and that changes in the ghrelin myocardial axis could be detectable even before overt changes in LV function [23]. In our previous study, we observed lower levels of ghrelin in patients with DCM in comparison with healthy controls [24]. Interestingly, among DCM cohort, early diagnosed patients had higher ghrelin levels than patients with a longer duration of the disease [24].

To sum up, during regular medical visits, control screening for NP and troponin would allow the identification of asymptomatic patients at high risk of developing HF [9][10][25]. It is known that patients classified as NYHA I, “apparently healed” patients with DCM, as well as patients at high risk of LV dysfunction, suffer from the deterioration of their condition over time. Therefore, in this environment, it would be of the utmost importance to check the levels of the biomarker which would indicate undergoing processes such as biomechanical stress, hypertrophy, and fibrosis that further lead to the deterioration of LV function and overt HF. The aim is timely recognition of these processes prior to apparent symptoms. For instance, higher levels of sST2 and Gal-3 could unveil the ongoing hemodynamic stress and fibrotic processes. During follow-up of NYHA I patients and individuals at high risk of HF, sST2 values could indicate the underlying mechanical strain, inflammation, and fibrosis, whereas elevated levels of Gal-3 could point out the cardiac remodeling processes.

Promising biomarkers that pave their pathways in the cardiovascular fields are microRNA (miRNA), long non-coding RNAs (lncRNA) and exosomes. These molecules are able to give us an insight into various processes involved in HF development such as myocyte loss, hypertrophy, fibrosis and changes in the extracellular matrix that are involved in cardiac remodeling. miRNAs involved in coronary artery disease (CAD) (e.g., miR-624, miR-340, miR-15-5p, miR-21-5p, miR-210-5p, miR-29b-3p, miR-7-5p, miR-99a-5p)  [26][27], diabetes (e.g., miR-21) [28], and hyperlipidemia (e.g., miR-122, miR-370) [29][30] could be used as biomarkers since these conditions  increase the likelihood of HF development overt time. In the same context, being associated with a higher incidence of diabetes, antisense lncRNA such as CTBP1-AS2 and VIM-AS1 have the potential as prognostic and diagnostic markers as well[31][32].

Suggested miRNAs, antisense lncRNAs, and exosomes could be promising biomarkers in “apparently healed” and NYHA I patients’ monitoring, revealing the beginning and/or worsening of existing fibrosis and hypertrophy [37]. However, further studies are needed to determine their exact role in pathophysiological pathways, estimate their prevalence in the general population and define the cut-offs for diagnostic and prognostic purposes.

Early recognition of asymptomatic individuals prior to overt HF development would reduce morbidity and mortality associated with the disease. Traditional and emerging biomarkers are reserved for the symptomatic phase, therefore there is a need for further studies regarding their practical use in asymptomatic settings. Non-coding RNA and exosomes cargo, by the same token, may provide an insight into undergoing processes that could lead to HF over time and therefore could be very useful as prognostic biomarkers. Given the fact that different biomarkers are involved in multiple harmful pathophysiological processes associated with HF, the multimarker approach might enable the early identification of patients at risk of HF.