Cryogels obtained by the cryotropic gelation process are macroporous hydrogels with a well-developed system of interconnected pores and shape memory. Biodegradable cryogels have been prepared from natural polymers (biopolymers) and synthetic polymers with biodegradable/bioresponsive bonds containing bio-resembling or artificial units. The cryogels could be composed of one type of polymer or a combination of different materials. Polymers from natural origins (plants or animals) attract considerable attention for their intrinsic biocompatibility and potential ability to mimic ECM, favoring cell-matrix interactions for tissue-engineering and regeneration.

Cryotropic gelation is the formation of a hydrogel under semi-frozen conditions, when most of the solvent crystallizes, and gelation occurs in small non-frozen areas around the solvent crystals (Figure 1) [1][2][3]. The solvent crystals perform as a template for the pores, and after melting, they leave large voids filled with liquid solvent [2]. The most common solvent used is water, but other solvents or solvent mixtures with freezing points reasonably close to zero can be used, such as dimethyl sulfoxide (DMSO), benzene or cyclohexane [4][5]. Water is considered to be the best solvent for the formation of biocompatible cryogels for biomedical applications. Gelation can occur through different mechanisms, usually through the formation of covalent bonds, or physical interactions (ionic bonding, hydrogen bonding and others) [6]. Synthesis by radical polymerization is the most commonly used method of preparing polymer cryogels. Acrylate derivatives are mostly used as gel-forming units together with an ammonium persulphate and tetramethylethylenediamine (APS/TEMED) initiating system in these reactions. Cryogels based on natural polymers can be prepared by cross-linking intact or pre-modified polymers utilizing the amino, carboxyl, hydroxyl and other functional groups. Variation of the cryotropic gelation parameters, such as the freezing temperature, cooling rate, and the presence of the ions or other solutes, as well as the polymer and solvent content, allows the tuning of cryogel properties for a specific application. 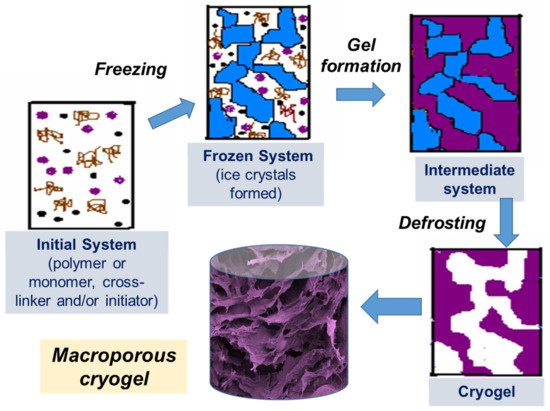 The composition—that is, the nature of the polymers used, their molecular weight and concentration—have an effect on the final cryogel morphology, mechanical properties and degradation. The porosity and mechanical properties of a HA cryogel cross-linked with ethylene glycol diglycidyl ether (EGDE) has been shown to depend on the HA and cross-linker concentration [49]. Increasing HA concentration decreased cryogel pore size, reduced swelling properties, and reinforced mechanical properties. On the other hand, decreasing cross-linker concentration, at a constant HA concentration, increased the pore size and swelling capacity but provided less rigidity [49]. The composition of gelatin/HA cryogels had an effect on the compressive modulus and other important mechanical characteristics of the cryogels [50]. Larger amounts of gelatin in the composite cryogel increased its Young’s modulus (or stiffness) and toughness due to the formation of additional EDC-mediated cross-links between gelatin and HA molecules, which contributed to the resistance of the struts to bending under compression. A more cross-linked material also showed diminished ultimate strain. However, increasing the gelatin concentration beyond 10% was found to offer an excessive cross-linking rate at the cross-linking temperature (−20 °C) and cross-linker concentration used. This resulted in completion of the gelation process in the polymer solution before porogens (ice crystals) were formed. The cryogels formed under these conditions were very brittle and had low porosity and inferior mechanical strength [50]. These examples show that the composition of the cryogel must be optimized for each specific application with respect to the nature and concentration of the polymer, as well as the cross-linking mechanism.

The freezing temperature affects the pore size and wall thickness of cryogels [19][49]. The highest freezing temperature and the slowest cooling rate produces the biggest pores in cryogels and lower temperature and faster freezing rates are required to produce the smallest pores. The reason for this is the different rates of growth of solvent crystals. Bigger solvent crystals form at slower cooling rates, and this creates bigger pores. At lower temperatures, more solvent will freeze, creating less space between the solvent crystals, where the gel precursors will concentrate forming denser polymer walls. At lower temperatures, the rate of nucleation is higher, which leads to the formation of more crystals of smaller size, thus creating smaller pores in the final cryogel material [19].
In general, the solvent crystals must form before gelation has finished. When cryogels are synthesized by radical polymerization, a lower concentration of initiator is usually used to slow down the polymerization rate and produce cryogels with large pores [51]. If the gelation occurs faster than the ice crystal formation, large, interconnected pores will not form and the cryogel will have a morphology similar to a hydrogel obtained at room temperature. A gel formed under these conditions will have less porosity, less mechanical strength, and will be brittle in nature [50]. Hixon et al. compared cryogel scaffolds with the conventional hydrogel-based scaffolds of three different materials (chitosan-gelatin, N-vinyl-2-pyrrolidone, and silk fibroin (SF)) to identify the optimal material and form of scaffold for use as a graft substitute in bone regeneration [52]. Cryogels proved superior to hydrogels in terms of swelling potential, porosity and mechanical properties, regardless of the polymer used [52]. The microstructure of the cryogels depended on the kinetics of the gelation and nucleation and could be controlled, as mentioned above, by temperature as well as by the concentrations of the initiator or cross-linker [51].
A heterogeneous structure of the cryogels forms under unidirectional freezing. This was observed in the preparation of sheets of cryogels, where the pore size varied from top to bottom. The cryogel had smaller pores at the bottom (in contact with the freezing plate) and the pore size gradually increased towards the top (Figure 2A) [20]. This anisotropic morphology can be beneficial for wound healing because it creates a special environment for cells and controls their migration. When material is applied with smaller pores at the top and larger pores at the wound bed, it stimulates cell migration from the wound into the material. An additional benefit of placing larger pores of the material on the wound bed is increased flexibility to adjust to the roughness and curvature of the wound surface [20].

Figure 2. Anisotropic structure in cryogels: (A) gelatin cryogel frozen in a petri dish, (B) scheme of set up for unidirectional freezing, and (C) the scheme of ice-crystals grows and scanning electron microscopy image of PEG-based cryogel. (Figure (A) is adapted from [2] and used under a Creative Commons Attribution 4.0 International License and (C) is adapted from [53] with permission from The Royal Society of Chemistry.
Many natural tissues, such as those in nerves, cartilage, ligaments, tendons, and the spinal cord, have oriented structures. The morphology of tissue scaffolds should mimic these natural tissues, and cryogels with an aligned porous structure are preferable for better physiological and mechanical function of the tissue scaffold. Unidirectional freezing has been used to create aligned porous structures in both synthetic and natural polymer cryogels [53][54]. During unidirectional freezing, ice crystals form and grow in one direction, forming an aligned porous structure after melting (Figure 2C). Poly(ethylene glycol) cryogels were prepared using PEGDA of various molecular weights: 200, 700 and 2000 Da as a precursor [53]. Cryogels with a smaller pore diameter were obtained using lower molecular weight 200 Da, PEGDA-200, while larger pores were observed when PEGDA with a molecular weight of 2000 Da was used (PEGDA-2000). The smaller pores of the PEGDA-200 cryogel were observed because PEGDA-200 exhibited a marked tendency to adsorb on the surface of the ice crystal during freezing, inhibiting crystal growth. Smaller ice crystals resulted in smaller pore diameters [53]. Freezing temperature was an important parameter for unidirectional freezing because it influenced the rate of formation, size and orientation of solvent crystals. Using a higher temperature leads to the formation of cryogels with large pore diameters. In the work by Wu et al., frozen acetic ether, frozen ethyl alcohol and liquid nitrogen were used to achieve freezing temperatures of −80 °C, −110 °C and −196 °C, respectively. The resulting cryogels had anisotropic compressive strength in accordance with the directions of the pores, and the diameter of the microtubule channels could be controlled in the range 10 to 50 μm by adjusting the molecular weight of the PEGDA and the freezing temperature [53]. Using the same approach, a chitosan-gelatin cryogel with aligned porous structure was prepared inside a polyurethane tube for peripheral nerve regeneration [54].

Cryogels can be made from bacterial cells by cross-linking them with a biocompatible cross-linker [55][56][57]. This approach uses living bacterial cells as the main building blocks for cryogels. Bacterial cryogels were prepared in a one-step process with a low percentage of polymer cross-linker, which formed a three-dimensional porous structure with a well-developed system of interconnected pores [56] (Figure 3). A range of the cryogels were made from whole cells of Escherichia coli [55], Pseudomonas mendocina, Rhodoccocus koreensis [56] and Acinetobacter radioresistens [57] and their combination [56]. Various macromolecular cross-linking agents were used, such as oxidized dextran, PVA and polyethyleneimine (PEI), the latter two being activated by GA. The composition of cross-linker agents was optimized so that a high percentage of cells remained viable (50 to 80%) and retained their metabolic activity [56][57]. As can be seen from the SEM image, the walls of the cryogels were mainly composed of whole cells with a very low percentage of polymer, around 1 to 2% (Figure 3C). Bioreactors, based on bacterial cryogels, were effective for the degradation of phenolic compounds [56][57]. The authors believe that the aforementioned approaches can also be used to design cryogels containing some other bacteria with beneficial medical effects or potentially extended to human cells, which nevertheless will require sophisticated conditions to maintain cell viability and activity under cryogenic conditions. 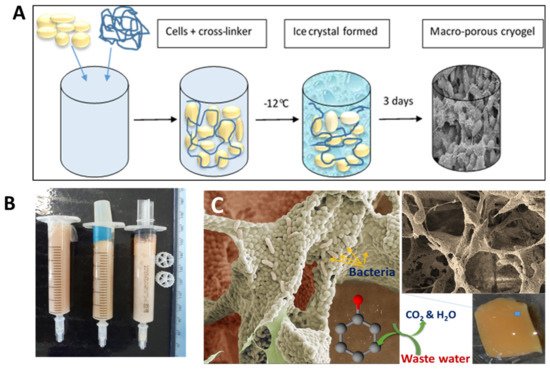 Another step towards creating a complex tissue design with better control over porosity and material heterogeneity is 3D printing. The cryogel 3D printing process has been designed to provide better control over porosity in cryogel samples [58][59]. Carboxymethylcellulose was used as a structural material with cross-linking chemistry of adipic dihydrazide. A multilayer 3D printing of cryogels was performed by controlling the temperature of the dispensed solution, which allows to change the local pore size on demand (Figure 4) [58]. It was possible to control the cell seeding density in vitro, as well as tissue infiltration and vascularization In Vivo by precisely controlling the local geometry of the scaffold in a larger 3D structure [58]. Another example of 3D printing involved the preparation of self-healing, oxime cryogels by cross-linking a poly(n-hydroxyethyl acrylamide-co-methyl vinyl ketone) with a bi-functional hydroxylamine [60].

Figure 4. Principle of 3D cryogel printing. (A) Illustration of 3D printing of cryogels. A viscous precursor solution was printed through a modified commercial printer onto a freezing cold stage. The liquid froze upon stage contact, leading to local self-organization of ice crystals and polymer. After curing at –20 °C and thawing, a cryogel was obtained in the desired shape (in this example, a torus). (B) Illustration of the 4D shape change. By withdrawing fluid, the cryogel was highly dehydrated and compressed; in addition, surface tension drove surface-minimizing folding. Upon rehydration, the cryogel returned to its original shape and volume via shape memory. The switch between compressed and deployed cryogel state was reversible, could be repeated many times, and was used for minimally invasive delivery. (C) Illustration of the hierarchical scaffold organization. Local pore size variation was used to preferentially drive in vitro cellular organization and In Vivo vascularization to areas with large pores. Reprinted from Acta Biomaterialia, Vol 76, Beduer, A.; Piacentini, N.; Aeberli, L.; Da Silva, A.; Verheyen, C.A.; Bonini, F.; Rochat, A.; Filippova, A.; Serex, L.; Renaud, P.; et al. Additive manufacturing of hierarchical injectable scaffolds for tissue engineering. Copyright 2018 [58] with permission from Elsevier.