Histoplasmosis is a systemic fungal infection caused by a dimorphic fungi and occurring globally. It is endemic in the Ohio and Mississippi river valleys of the United States of America, India and Southeast Asia. The clinical presentation of histoplasmosis mimics features seen in tuberculosis (TB) and may be misdiagnosed as such.

2. Current Analysis on Histoplasmosis in Children

Histoplasmosis in children has been reported globally with high endemicity in Northern and Southern America [2][6]. Our literature search revealed a total of 1461 documented cases of histoplasmosis in children reported globally (Table 1) dating from 1945 to 2021. The number of cases were highest in North America (n = 1231), with 76.7% (944/1231) occurring in the USA. Very few cases (n = 4) in the pediatric population have been reported in Europe and were found in immigrants from endemic regions [7][8][9]. The number of documented cases from other climes were, South America (n = 135), Africa (n = 65) and Asia (n = 26) respectively. More cases occurred in the non-HIV population compared to the HIV population. The percentages of non-HIV patients with pediatric histoplasmosis across the various regions was 97.1% (1418/1461) and North America (96.8%, 1192/1231), South America (99.3%, 134/135), Africa (98.5%, 64/65), Asia (96.2%, 25/26) within each region, respectively, Table 1, Figure 1. Pediatric histoplasmosis in America and China were caused by Histoplasma capsulatum var capsulatum (Hcc), while in Africa, it was largely due to Histoplasma capsulatum var duboisii (Hcd) (88.7%, 47/53). Most cases of disseminated histoplasmosis occurred in persons with compromised immunity (Table 2) [10][11]. These infections are also common at the extremes of age, i.e., in infants and the elderly, although cases of disseminated histoplasmosis have been reported in apparently immunocompetent individuals without the usual risk factors of extremes of age or some form of underlying immunosuppression [12][13]. Childhood cancers such as leukemias and lymphomas as well as their treatment may predispose to histoplasmosis [10]. Underlying lung diseases, environmental exposures and toxins, autoimmune disease, long-term steroid therapy, use of immunosuppressive drugs such as TNF-alpha inhibitors may also predispose to histoplasmosis in children who are HIV-negative. Other less common conditions include histiocytosis, hyperimmunoglobulin M and E syndromes and pancytopaenias (Table 1, Table 2 and Table 3) [10][11]. DH has also been documented in both premature and mature infants with variable outcomes [14][15][16][17][18]. 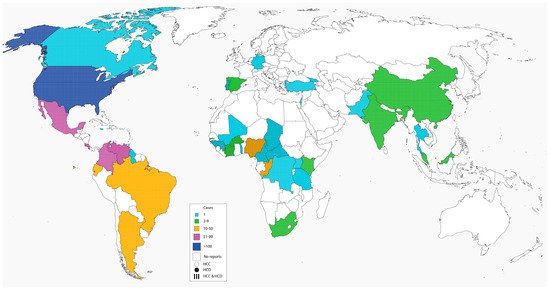 Histoplasmosis may be misdiagnosed as TB due to the similarities in their clinical presentation [173]. Mosam et al., 2006 reported a case of disseminated histoplasmosis in an 11-year-old female African child who initially received anti-Koch’s regimen for two weeks despite negative Mantoux test and negative AFB [173]. Additionally, though rare in the literature, cooccurrence of histoplasmosis and TB has also been documented in the pediatric age group [139]. Clinicians should investigate more with respect to histoplasmosis when seeing this cohort of patients.

Pediatric cancers are probably the commonest predisposing factor to histoplasmosis infection in non-HIV patients. Conversely disseminated histoplasmosis can present with pancytopenia, and be initially mistaken for leukaemia or aplastic anaemia. The presentation may be localized i.e., pulmonary disease or may be disseminated although the latter appears to be commoner [10][50]. Most children have an underlying hematologic malignancy (leukemia or lymphoma) and the diagnosis of histoplasmosis may be challenging due to the similarity in appearance of pulmonary histoplasmosis to lung metastases of primary malignancies [10]. A lung biopsy may be required to distinguish the two [11]. The impairment of T-cell function in malignancies is the pathogenetic mechanism for the increase in susceptibility to histoplasmosis in pediatric cancer patients [24][25]. The use of chemotherapeutic agents resulting in bone marrow depression and consequently predisposing the children to histoplasmosis and other opportunistic infections is another pathogenetic explanation for the increased incidence [10]. A 14-year review of 57 pediatric cancer patients by Adderson revealed that there were 61 episodes of histoplasmosis in the group with disseminated histoplasmosis being more common [50]. Fever was the most common presenting symptom and no mortalities were attributable to histoplasmosis but cancer therapy was often delayed or modified due to the infection. Most patients initially received unnecessary antibiotic therapy and they were mostly non-neutropenic. Hess et al. found that urine antigen detection was highly sensitive for disseminated disease in oncology patients but lacked sensitivity in patients with acute pulmonary disease and if utilized alone may lead to missed diagnoses [10].

Pediatric histoplasmosis most frequently manifests as an acute pulmonary disease [46]. In adults, pulmonary histoplasmosis affect individuals with underlying lung disease such as emphysema and less commonly chronic bronchitis [140]. Pulmonary histoplasmosis has also been reported in individuals previously diagnosed with or treated for tuberculosis [140]. Asthma, the commonest chronic lung disorder of childhood is thought to predispose to pulmonary histoplasmosis with possible pathogenetic mechanisms including alterations in local immunity of the respiratory tract and chronic use of corticosteroid treatments [170]. The differential diagnosis should be considered in children with asthma who present with recurrent or prolonged symptoms and who have been exposed to Histoplasma, as endemic areas and bat caves [170].

Most cases of histoplasmosis in healthy children result in a clinically inapparent infection. Immunocompromised hosts, infants and the elderly may present with clinical and often disseminated disease [102]. The size of the inoculum which is a function of the degree of exposure is also implicated in the tendency to develop clinical infections. Daubenton et al. reported a case of a seven-year-old immunocompetent child who lived on a poultry farm and developed disseminated histoplasmosis [12]. Although the relevant environmental exposure had been exposure to bat caves, non-cave exposures werehave also been reported [12]. For instance, Haselow et al. reported that 12 children age range 4–19 years had contracted histoplasmosis after attending a family bonfire which used bamboo retrieved from a large red blackbird roost [79]. Seven of the children were ill enough to require admission but there were no reported fatalities. The large ‘inoculating dose’ and the age of the children were probably important factors in the spread of the disease in the case.

Malnutrition is strongly associated with pediatric morbidity and mortality. The World Health Organization reported in 2020 that malnutrition was a contributing factor in 45% of all mortalities in under-five children worldwide [174]. Malnutrition is the primary cause of immunodeficiency worldwide and young children and the elderly are most affected [175]. Malnutrition leads to defects in both innate and acquired immunity and sets off a vicious cycle with malnutrition leading to poor immunity and increased risk of infections/more severe infections which will then lead to poor intake, increased metabolic demand for nutrients leading to even more malnutrition. Defects in cell-mediated immunity caused by malnutrition also predispose to histoplasmosis. Mata-Essayag et al., in a retrospective review of 158 cases of histoplasmosis in Venezuela noted that 6 out of 42 children (14.3%) with histoplasmosis were also malnourished [119]. Of these, four (67%) died [119]. Lopez et al., in a study of 45 Colombian children with histoplasmosis found that malnutrition was the most important risk factor being found in 37% of the patients [4]. In an earlier study by Jimenez et al., malnutrition was an association in over two-thirds of children with disseminated histoplasmosis. The mortality rate in the study was 61% [30].

Pediatric autoimmune diseases like juvenile rheumatoid arthritis (JRA) are frequently treated with steroids and other immunosuppressive agents including methotrexate. Because of the low doses used, opportunistic infections are not very common in association with autoimmune steroid or immunosuppressive therapy [91]. Hunstad et al. reported a case of a seven-year-old female with JRA who developed histoplasmosis while on low-dose methotrexate. She had also recently been weaned off prednisolone treatment [91]. The authors also noted that histoplasmosis and other opportunistic infections (OIs) were less common in JRA patients receiving low-dose methotrexate than in adult patients receiving the same therapy for rheumatoid arthritis. The rarity of fungal opportunistic infections including histoplasmosis has also been noted among pediatric patients with systemic lupus erythematosus (SLE) with the first case report of Histoplasmosis diagnosed in a child with SLE being as recent as 2012 [110]. The patient in question presented with abdominal distension, splenomegaly and multiple mesenteric lymph nodes and unfortunately died of septic shock while undergoing treatment. While these reports are rare, the increasing number of children being diagnosed with autoimmune disorders and on treatment with steroids and immunosuppressive agents makes a case for pediatricians and rheumatologists to be vigilant in identifying such cases so outcomes can be improved.

Pancytopaenia and defective phagocytic function usually in association with haemophagocytic lymphohistiocytosis (HLH) has been noted as a predisposing factor to pediatric histoplasmosis with Russ et al. reporting a case of histoplasmosis and HLH in a seven-month-old infant with vomiting and failure to thrive [176]. The report noted that the child lacked homozygosity for HLH or had an underlying immunodeficiency, and suggested that alterations in T-cell function increased her risk for HLH following the infection with histoplasmosis, although it was unclear which condition occurred first [176]. Children with defective T- and B-cell function as well as a defective phagocytic function also present with fungal opportunistic infections such as disseminated histoplasmosis. Such reports are not common in literature and are mostly from the developed world, possibly due to better diagnostic facilities. Hasliza et al. reported a case of disseminated histoplasmosis in a two-year-old previously healthy child. The workup during the illness identified gross leucopenia with defective T-cell and phagocyte function [168]. The T-cell and phagocyte function were all found to have normalized three months after the illness.

Tumor necrosis factor-alpha (TNF-alpha) inhibitors such as adalimumab, infliximab and etanercept are commonly used in the treatment of pediatric inflammatory bowel disease [38][67]. They may also be used as second-line agents for auto-immune disorders of childhood such as JRA and psoriasis. However, inhibition of the TNF-alpha pathway results in a predisposition to severe infections including histoplasmosis, which is the commonest invasive fungal infection in patients on TNF-alpha therapy [67]. Dotson et al. reviewed five cases of histoplasmosis in children receiving either infliximab or adalimumab for Crohn’s disease and noted that early diagnosis with discontinuation of anti-TNF medication as well as close follow-up were key to achieving good outcomes [38]. The study did not however recommend screening for latent histoplasmosis before commencing anti-TNF alpha drugs. Another report in an eight-year-old male with Crohn’s disease on Infliximab who presented with histoplasmosis and concurrent Pneumocystis pneumonia further raised the issue of pre-commencement screening for opportunistic infections in children receiving TNF-alpha inhibitors [38].

Hyperimmunoglobulin E syndrome also known as Job’s syndrome and hyperimmunoglobulin M syndrome are associated with defects in immune function specifically with defects in immunoglobulin levels, neutrophil chemotactic defects, defects in T-cell signaling and cytokine abnormalities [63][72]. Impaired Th 17 cell differentiation is an immune defect consistently found in the STAT3 Job’s syndrome mutation and this mutation impairs protection against invasive fungal infections including histoplasmosis [63][72]. Case reports from pediatric patients have shown that both syndromes are associated with pulmonary, disseminated [63][72], and even cutaneous histoplasmosis infection [174].