This entry builds a coronavirus knowledge graph (KG) by merging two information sources. The first source is Analytical Graph (AG), which integrates more than 20 different public datasets related to drug discovery. The second source is CORD-19, a collection of published scientific articles related to COVID-19. We combined both chemo genomic entities in AG with entities extracted from CORD-19 to expand knowledge in the COVID-19 domain. Before populating KG with those entities, we perform entity disambiguation on CORD-19 collections using Wikidata. Our newly built KG contains at least 21,700 genes, 2500 diseases, 94,000 phenotypes, and other biological entities (e.g., compound, species, and cell lines). We define 27 relationship types and use them to label each edge in our KG. This research presents two cases to evaluate the KG’s usability: analyzing a subgraph (ego-centered network) from the angiotensin-converting enzyme (ACE) and revealing paths between biological entities (hydroxychloroquine and IL-6 receptor; chloroquine and STAT1). The ego-centered network captured information related to COVID-19. We also found significant COVID-19-related information in top-ranked paths with a depth of three based on our path evaluation.

The COVID-19 pandemic has caused nearly 1.28 million deaths worldwide (as of 6 December 2020) [1]. The disease has affected many human sectors worldwide and prompted scientists to explore the topic more extensively. Consequently, the number of scientific publications related to COVID-19 has increased sharply since 2020. Several bibliometric studies focused on the COVID-19 literature and aimed to understand the knowledge flow and trends [2]. However, there has not been much research exploring in-depth knowledge unit analysis (e.g., biological entities-level explorations), especially relationships between knowledge units. This limitation might prevent us from detecting the full knowledge flow in studies. Therefore, we require solid knowledge representation with clear definitions of knowledge unit relationships for greater understanding.
This study proposes a framework to merge two independent datasets Analytical Graph (AG) and CORD-19 [3] (with significant knowledge overlaps) into a new, larger knowledge graph (KG). We build the KG to promote more profound knowledge retrieval and in-depth knowledge mining. AG is a subgraph generated from multiple biomedical KGs, while CORD-19 contains coronavirus-related scientific publications. We adopt PubTator [4], a popular biological entity extraction tool, to extract entities from the CORD-19 literature. However, we cannot explicitly capture the relationships among extracted knowledge units. Therefore, we use AG to enrich the relationships among entities, yielding a more comprehensive, global-wise knowledge base, covering coronavirus entities and their “contexts”.
The new KG contains at least 21,700 genes, 2500 diseases, 94,000 phenotypes, and other biological entities (e.g., compound, species, and cell lines). We use 27 types of relationships in our KG and natural language processing techniques, such as entity recognition, semantic disambiguation, and knowledge merge. This KG could be used widely in the future. It functions as an essential knowledge base for related scientific research and development, while benefiting from knowledge retrieval and in-depth knowledge mining. This new KG acquires and integrates coronavirus-related information into an ontology and enables researchers to apply reasoning to derive new knowledge according to defined rules.
We evaluated the KG’s usability for information extraction using our pathfinding framework, which retrieves several paths with different depths. It calculates the path score based on the similarity distance between two nodes in every relationship found in the path. First, we transform nodes into vector values using a word vector transformation model. Then, we calculate the similarity distance between nodes using cosine similarity. We use a pre-trained word2vec model built using PubMed® and PubMed Central® (PMC) texts [5].

We illustrate a subgraph from our established KG in Figure 1. Each node in the subgraph represents a biological entity. Node labels represent entity names and biological types (e.g., chemical, gene, and disease). We defined different colors for different biological (node) types. The size of the nodes is proportional to their degree (the number of connected nodes). Each edge represents a relationship between two entities (e.g., co-occurrence, gene and cellular components, and gene-to-gene relationship). The label indicates the relationship type. 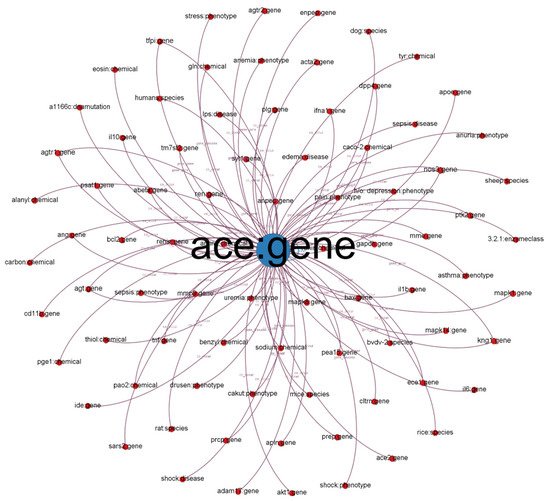 Figure 1. Subgraph from established KG with ACE: gene as the center node.
We chose the angiotensin-converting enzyme (ACE) gene, encoded as ACE, which has 40% overall identity to ACE-2 and is positively related to COVID-19 [6]. ACE-2 counters the related ACE activity by reducing angiotensin-II and increasing angiotensin-(1–7), making it a promising drug target for treating cardiovascular diseases. ACE-2 activators are also potential COVID-19 treatments, according to their popularity in the COVID-19 literature [7]. As depicted in Figure 1, we discovered that other entities such as SARS2 and PaO2 are highly related to COVID-19 because PaO2 reflects arterial oxygen tension and COVID-19 damages the lung.

This section evaluates each path by scoring it using the similarity distance between nodes and verifying the information given in the top-ranked paths. We calculated the similarity distance using cosine similarity on vector representation from the vector transformation model [5]. First, we retrieved the shortest paths from the source node to the target node with several depths from the KG. We used three depths: two, three, and four. Paths with a depth of two have three nodes: one source node, one target node, and one node in between. Paths with a depth of three have two nodes in between, and paths with a depth of four have three nodes.
Second, for each path, we calculated and summed the cosine similarity between nodes. Third, we measured the cosine similarity between nodes using their vector values obtained from [5]. Finally, we sorted paths (separately for each depth) based on the sum of cosine similarity values between nodes. Then, we analyze whether the information given in the top-ranked paths is accurate. The top-ranked paths are paths with the top 95 percentile score from the distribution. We illustrate the evaluation process in Figure 2. 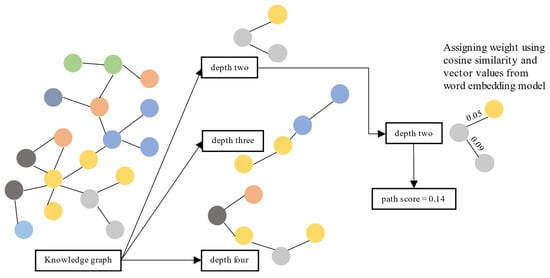 This section discusses the characteristics of paths between two entities: IL-6 receptor and hydroxychloroquine. IL-6 is Interleukin 6, an interleukin that functions as both a pro-inflammatory cytokine and an anti-inflammatory myokine. IL-6 inhibitors may ameliorate severe lung tissue damage caused by cytokine release in patients with severe COVID-19 infections. Hydroxychloroquine is a medication used to prevent and treat malaria in areas where malaria remains sensitive to chloroquine. Other usage includes the treatment of rheumatoid arthritis (RA), lupus, and porphyria cutanea tarda (PCT).
Common side effects of hydroxychloroquine consumption include vomiting, headache, changes in vision, and muscle weakness. Severe side effects may include allergic reactions, vision problems, and heart problems. Although we cannot exclude all risks, it remains a treatment for rheumatic disease during pregnancy. Companies sell hydroxychloroquine under the brand name Plaquenil (among others).
The list of top-ranked paths (top 95 percentile) with a depth of two, three, and four based on the shortest path algorithm of the graph to find and calculate the score of all paths from IL-6 receptor to hydroxychloroquine. A subgraph from top-ranked paths with a depth of three is illustrated in Figure 3. 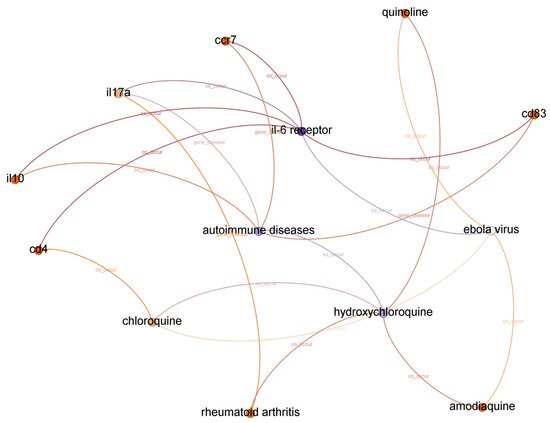 STAT1 is the primary transcription factor activated by interferons (IFNs) vital to normal immune responses, particularly viral, mycobacterial, and fungal pathogens [14]. An innate immune response is a defense strategy that includes physical, chemical, and cellular level defenses. Type I IFNs are a critical component of this response. In COVID-19 cases caused by the SARS-CoV-2 N protein that inhibits the phosphorylation of STAT1 and STAT2, the conditions also suppress IFN signaling [15]. Chloroquine, also known as Chlorochin and Aralen [16], has been studied to treat and prevent COVID-19.
Chloroquine is an aminoquinoline primarily used to prevent and treat malaria in areas where it remains sensitive. Chloroquine is also vital as an anti-inflammatory agent in RA and lupus therapy.  A subgraph from top-ranked paths with a depth of three is illustrated in Figure 4. 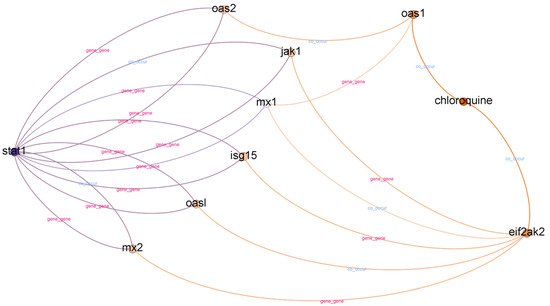 This study built a coronavirus KG by merging two existing datasets: AG and CORD-19. The combination of the two datasets enriches the KG with more entities. However, further analysis is needed to illustrate that those entities contribute to understanding the COVID-19 disease context. We analyzed our built KG using an ego network analysis for nodes, such as ACE, SARS, and PaO2. From the retrieved ego network, we can discover the high relatedness between those nodes and COVID-19.
We attempted pathfinding using a defined head and tail node to confirm KG usability for further knowledge discovery. We found that we could obtain paths with significant relationships using word-embedding and distance similarity between nodes. We also found that using a depth of three in both IL-6 receptor–hydroxychloroquine and STAT1–chloroquine cases resulted in more information related to COVID-19.
In the future, we plan to update this KG with more recent coronavirus publications. We also plan to include more related knowledge resources to enrich the graph. We will perform a further experiment in the COVID-19 domain query search for knowledge discovery using the built KG. We will explore more paths on scoring methods and missing link prediction.