Several factors can activate neuroinflammation, such as infection, traumatic brain injury, toxic metabolites, autoimmune diseases, aging, air pollution, passive smoke or spinal cord injury, and stimulate the production of cytokines and chemokines, which also act as a support for cell growth and survival. They include at least 40 types of interleukins (IL), first thought to be expressed only by leukocytes, but later found to be produced by different cell types. Continuous microglia activation causes the recruitment of peripheral immune cells, such as macrophages and B and T lymphocytes, which are responsible for the innate and adaptive immune response. Another cellular component activated during neuroinflammation is represented by astrocytes; they are strictly linked to the BBB structure and can be responsive to signals released by injured neurons or activated microglia.

In the latter case, it can be a consequence of traumatic brain injuries and brain tumors; then, it can be related to an infectious, metabolic, immune or unknown etiology, as summarized in the last ILAE classification of the epilepsies. Undoubtedly, the presence of certain chronic inflammatory diseases facilitates epilepsy or other neurological manifestations. Indeed, in most autoimmune diseases, there is a five-fold increased risk of epilepsy in children and a four-fold increased risk in non-elderly adults (aged < 65). Even though the impaired regulation of the inflammatory response in injured neuronal tissue is a critical factor to the development of epilepsy, it is still unclear howthisunbalanced regulation of inflammation contributes to epilepsy.

In epileptic rodent models, a key role is played by IL-1β, its receptor (IL-1R), and the antagonist of its receptor (IL-1Ra) Moreover, various hyperacetylated molecules, such as “high-mobility box 1 group protein” (HMGB), a chromatin component released during necrosis, are capable to amplify TLRs activation , and are involved in ictogenesis in models of chronic epilepsy and in humans. It interacts with the extracellular matrix and participates in remodeling AMPA receptors, regulating circuit excitability. Another novel mechanism reinforcing neuroinflammation is supported by the renin-angiotensin system (RAS), which reinforces immune system activation; blocking this pathway prevents neurobehavioral effects of neuroinflammation, induced by lipopolysaccharide (LPS) treatment.

Considering this background, the goal of our review is to show some of the known aspects of the mechanistic relationship between neuroinflammation and epilepsy, mainly focusing on certain paradigmatic diseases as focal cortical dysplasia, PCDH19 epilepsy, glioblastoma multiforme (GBM), maternal immune activation, multiple sclerosis, autism spectrum disorders (ASD) associated with epilepsy, and SARS-COV-2. Following this, we finally explore several therapies that are currently being employed in epileptic patients, targeting neuroinflammation.

2. An Overview on Therapies Affecting Neuroinflammation with Possible Outcome in Epilepsy

Then, on the basis of the interaction between epilepsy and neuroinflammation that we have illustrated in general, and for some exemplificative pathologies, in this section we summarize several therapeutic strategies directed to contrast neuroinflammation and impinging on amelioration of the epileptic phenotype (Figure 1). Many of these drugs have been selected on the basis of results from preclinical studies in different animal models of epilepsy, and thanks to the discovery of several biomarkers in patients. This section, far from being exhaustive on this issue, tries to recapitulate principal results in the treatment of epilepsy, also evidencing some problems related to the use of drugs that stop neuroinflammation. 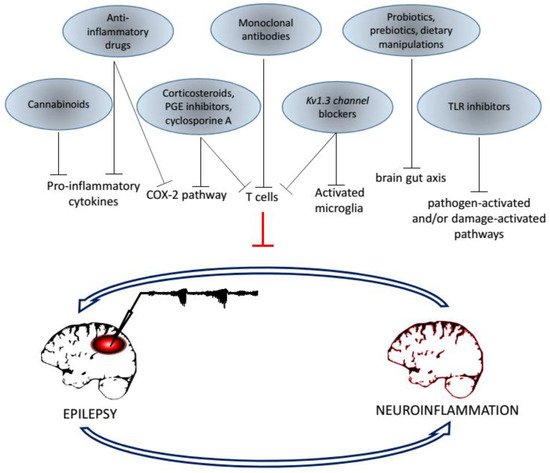 Figure 1. Schematic representation of attempted therapeutic strategies targeting neuroinflammation and capable to ameliorate epilepsy. The diagram illustrates the interaction with specific families of drugs and their targets; their main function seems to interrupt the loop that reinforces neuroinflammation produced by epileptogenesis. The trace recorded from the left brain is a typical example of critical activity due to the localized treatment with the convulsive agent 4-AP in our experiments.

First of all, neuroinflammation involves complex interactions between innate and adaptive immunity, as seen in animal models. The main goal of immunotherapy is to reduce acute inflammation and minimize irreversible neuronal dysfunction. People with autoimmune epilepsy may usually have clinical problems in addition to their seizures, including psychiatric difficulties, cognitive problems, balance impairment, sleep disorder, and autonomic (involuntary actions such as breathing or heartbeat) dysfunction, which should be treated apart. Interfering with these molecular cascades has been seen as beneficial in treating epilepsy with several of the following different drugs:

Monoclonal antibodies against immune cell membrane proteins, such as efalizumab and natalizumab, already used in autoimmune pathologies such as psoriasis, multiple sclerosis and Crohn’s disease, have been used to target serum auto-antibodies in epileptogenesis. Some ameliorations have been found after early treatment with immunomodulatory therapies, in autoimmune encephalitis and autoimmune epilepsies. Recently, autoantibodies against the IL-1 blockade are proposed for refractory epilepsy in an adolescent female with pharmaco-resistant epilepsy with a good outcome. Then, tocilizumab, a humanized monoclonal antibody against the IL-6 receptor, has been found to be successful in a case report of two patients with pediatric refractory status epilepticus and acute epilepsy. It is clear that there is the lack of standardized researches in this field, despite evidences emerging from basic research. The reason is that it is often difficult to find the right target of patients to be treated, due to the fact that the critical step is to intervene as early as possible.

According to the results in animal models, the use of probiotics, prebiotics (as probiotic nutrients) and dietary manipulations, such as a ketogenic diet, could be promising to regulate homeostasis in brain excitability. However, standardized studies with controlled administration of probiotics need to be done to better investigate this issue. For example, a recent clinical trial reported a beneficial effect of probiotics in a pilot study, with a reduction in seizures to a 50% level in about 30% of the subjects, and a general amelioration of life quality.

The endocannabinoid system (ECS) has been shown to contribute to neuroinflammation, and neuroinflammation can cause epilepsy; consequently, there is much evidence about the positive use of cannabinoids to treat chronic epilepsy. Indeed, ECS can modulate the balance between excitation and inhibition, through the release of endogenous cannabinoids (endocannabinoids). Specifically, during neuroinflammation cannabidiols inhibit the activity of cyclooxygenase-2 (CO-X 2), 5-lipoxygenase and cytochrome P450, reducing the expression of inflammatory molecules, such as prostaglandins and leukotrienes. Interestingly, a drug belonging to this class, Epidiolex, has been very recently approved by the FDA as a treatment for pharmaco-resistant epilepsy in Dravet syndrome. Moreover, the use of phytocannabinoids, i.e., active molecules present in Cannabis sativa, has been effective in a wide range of pathologies with neurological correlates, among which are chronic pain, nausea, and multiple sclerosis. However, more studies are needed in this field, since cannabidiols and its derivatives are still considered illegal in several countries, and because a secondary collateral effect of phytocannabinoids cannot be neglected in many cases.

Another therapeutical strategy to block neuroinflammation is the use of inhibitors of voltage-gated potassium channels Kv1.3. Importantly, abnormal expression of Kv1.3 channels has been demonstrated to also be correlated with epilepsy. Toxins produced by sea anemones, scorpions, spiders, snakes, and cone snails can target specific subsets of T lymphocytes as well as microglial cells, acting on their Kv1.3 channels and blocking neuroinflammation. Clinical trials to explore the efficacy of this treatment are currently ongoing, even if a problem could be the difficulty for these venoms to pass BBB.