In 1927, E. Bradfield and B. Jones found the first supramolecular LC structure generated by hydrogen bonding between the carboxyl groups of benzoic acid derivatives [5][1]. Obviously, supramolecular LC is totally different from traditional covalent-bonded LC molecules, and should be viewed as an LC composite system based on intermolecular non-covalent interactions, including hydrogen bonds (H-bonds), halogen bonds, van der Waals force, electrostatic interaction, conjugation effect, hydrophobic interaction and so on. To date, supramolecular LC has gradually developed into a mature and widely applied discipline for lots of aspects (e.g., nanowire [6][7][8][9], templates [10], LC physical gel [11] and electro-optic materials [12][13]).

Compared with covalent bonds, non-covalent interactions are reversible and highly responsive to external physical or chemical stimuli (e.g., heat and solvent). H-bonds, π−π stacking, van der Waals forces and other non-covalent interactions have lower energy, and is easy enough to induce assembly and disassembly when using to an external stimulus. A supramolecular fibrous LC network featuring heat recovery was employed to construct soft materials like physical gels [11][12].

Many supramolecular LC systems were formed between LC molecules, units or other components, and appeared in different new phases [13][14][15][16]. Different from conventional LC, these highly ordered supramolecular architectures would be paid much attention due the response ability, not the nature of LC (e.g., phase transition, thermal stability and spatial order). Therefore, supramolecular LC formed by non-covalent interactions provided a new route to design multifunctional and practical materials [17][18][19][20][21].

In supramolecular LC systems, H-bonds are a general option to position different components in a certain arrangement with enhanced intermolecular binding strength [13][22]. For aromatic LCs, π−π conjugation can also cause these molecules to form well-organized supramolecular assemblies [23][24][25]. Other non-covalent interactions, like halogen bonds, ionic bonds and π−π conjugation, have their own unique way of constructing multifunctional LC supramolecules [26][27][28][29][30]. When combined with electron-donating groups or systems, LCs containing an electrophilic halogen atom can act as a acceptor to form halogen-bonded supramolecular LCs [29][31][32][33]. As for ionic LCs, they were formed by the self-assembly of ions in solution, and behaved with different self-assemblies and LC phases upon different solvent inductions [30][34].

Besides, non-covalent interactions can even boost inorganic materials with LC molecules forming nanoparticle–LC systems. Not surprisingly, graphene, carbon nanotubes and other multifunctional carbon nanomaterials containing large π-conjugated structures are easily assembled with LC molecules. For example, the nematic matrix, like 5CB and 8CB, can align carbon nanotubes to form long-range orientational ordered structures with a grooved surface or magnetic or electric field [35][36]. Additionally, carbon nanotubes can modify the LC’s anisotropy in optic and dielectric anisotropy [37][38][39]. Monolayer graphene flakes can provide the parameter of orientational order to enhance the dielectric anisotropy in the nematic LC of MLC-15600-100 [40]. It has also been reported that the presence of graphene flakes can accelerate the electro-optic response in a nematic LC [41]. H-bonds were also used as a linker to combine LC molecules and nanoparticles into a supramolecular whole [42]. For example, highly specific H-bonding interactions improved the dispersibility and compatibility of the ZrO2 nanoparticles in supramolecular nematic LC nanocomposites [43].

H-bonds are an ideal non-covalent interaction for the construction of supramolecular architectures [20][44][45][46][47][48]. Once a donor (D) with an available acidic hydrogen atom interacts with an acceptor (A) carrying available non-bonding electron lone pairs, H-bonds arise and, therefore, are endowed with high selectivity and directionality [20]. Importantly, H-bonds are easily affected by solvents, salts, ions, temperature and so on, so they are viewed as key to the controllability of H-bonded supramolecular systems. As a tool to assemble supramolecular architectures, H-bonding can bring positive effects to LC, e.g., to generate new phases, expand the phase temperature range, improve thermal stability and so on. 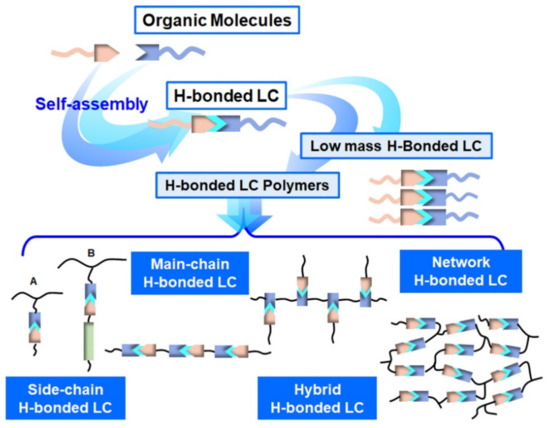 Complex 1 (see Figure 1a) consists of 4-butoxybenzoic acid (4BA) and trans-4-[(4-ethoxybenzoyl)oxy]-4’-stilbazole (2Sz) with one H-bond, featuring sematic and nematic phases. The mesomorphic range of Complex 1 was extended to 102 °C, and a new smectic phase appeared between 136 °C and 160 °C, but each component showed only a nematic phase [61]. Complex 2 (see Figure 1b) was formed with three parallel H-bonds between the uracil and 2,6-diaminopyridine groups, with a columnar hexagonal LC mesophase [62]. There was no mesomorphic phase of these pure compounds. Fortunately, the mesophase became observable only if long enough aliphatic chains were introduced into the uracil derivatives. Side-chain polyacrylate was used as framework to build up a special supramolecular LC through hydrogen bonds between its pendant pentoxybenzoic acid groups and guest stilbazole ester (see Figure 1c) [63]. The mesomorphic range of the mixture with the determined ratio (polyacrylate: stilbazole ester = 1:1) reached 112 °C, while the corresponding ranges of each component were 15 and 48 °C, respectively. It is likely that this strong enhancement on the mesophase is due to the formation of hydrogen-bonded complexes. On the other hand, supramolecular main-chain “polymers” were obtained with triply hydrogen-bonded complementary pairs between uracil and 2,6-diacylamino-pyridine (see Figure 1d) [64]. Under different conditions, these 1:1 mixtures showed special optical textures (e.g., stretched and helically wound fibers).

One of the obvious traits of these supramolecular H-bonded mesogens is high thermal stability. The stabilization effect greatly contributes to the ordered condensed state of hydrogen-bonded supramolecular LCs. Another merit is the unique reversibility during dynamic formation and breaking, compared with covalent-bonded LC molecules. Both of them provide a specific idea for designing new LC structures [65][14]. Naturally, H-bonded supramolecular LCs have been rapidly developed into a flexible, facile and cost-effective approach for novel smart materials [66][67][68].

In this review article, we describe topics on the recent progress of H-bonded supramolecular liquid crystal, which consists of assemblies among organic LC molecules, or between inorganic materials and organic LC molecules. We will discuss molecular structures and the relationships between molecular self-assembled structures and functions, especially the formation, mechanism and advantage of hydrogen bonds. In addition, we focus on some H-bonded LC systems which showed a new LC phase, wider phase transition temperature, better mechanical properties, “reversible” deformation behaviors, wider reflection area or other better performance properties with some external stimuli, for example, light, pH, thermality and humidity.