In the age of green chemistry and an increased focus on process sustainability, there is an increased awareness within the research community towards the use of traditional organic solvents [1]. In typical chemical processes, solvents account for the bulk of the total reaction mass and associated waste production, which raises potentially significant environmental concerns. As numerous solvents are derived from petroleum-based feedstocks, there are also concerns regarding the long-term security and appropriate use of these chemicals. The combination of these factors has seen chemists seek alternative solvent systems to address these concerns. Examples of such alternative, more environmentally friendly solvents include dihydrolevoglucosenone (CyreneTM) [2], RodiaSolv© PolarClean [3][4] and bio-derived lignin pyrolysis oil methyl ether [5], in particular various substituted anisoles [6].

In addition to the above examples, systems known as “deep eutectic solvents” (DESs) are attracting significant attention in numerous areas of chemistry and materials science as novel alternatives to typical solvents due to their unique properties and the potential benefits their use confers. Additionally, in contrast to aromatic hydrocarbons, long-chain aliphatic hydrocarbons and chlorinated solvents, DES systems have both low purchase cost and low monetary impact values with respect to solvent emissions [7], which is an important consideration for solvent use on an industrial scale. DES systems have been known since the end of the 19th century [8], typically referred to as “eutectic mixtures” but now more frequently as deep eutectic solvents [9] as will be the case in this review, or alternatively low transition temperature mixtures (LTTMs) [10]. The rapid developments in the use of DES systems seen over the past twenty years have emerged due to their appealing properties they possess, in particular their ease of preparation compared to ionic liquids (ILs [11]). DES systems are powerful solvents that exhibit negligible volatility, are non-flammable and certain classes are electrically conductive; they can also be recycled through recovery of the respective solvent components [12][13][14]. DES systems are largely considered to be non-toxic [15], although it is worth noting that DESs consisting of individual components that are considered to be safe show increased cytotoxicity relative to aqueous mixtures of the components [16]. Natural deep eutectic solvents (often referred to as NADES [17][18]) are perhaps even more appealing, as the components are derived from bio-sourced and/or renewable feedstocks. The applications of DES systems are diverse given their unique properties, and have seen application in numerous areas including metal nanoparticle synthesis [19], carbon dioxide fixation [20], modification [21] and solubilization [22] of cellulose, RNA extraction [23], preparation and modification of polymer membranes [24][25], electrolytes for fuel cells [26][27], natural product extraction [28] and a wide array of chemical syntheses [29][30][31][32]. The reader is directed to several excellent reviews detailing the use of DES systems in various areas of chemistry and chemical engineering [33][34][35][36][37][38][39].

The use of DES systems in polymer chemistry is gaining increasing attention since the first report of polymerization using a eutectic mixture as far back as 1985 [40]. Two primary themes are emergent: polymerization “in” a DES and the polymerization “of” a DES [41]. DES systems can be used to replace traditional solvents, whereas DES systems where one or more components are polymerizable (often referred to as “polymerizable eutectics” or “deep eutectic monomer solvents”) provide the unique scenario where the monomer plays the dual role of solvent and reactant, whereby mild reaction conditions can be exploited for the polymerization to proceed. This is particularly appealing for monomers that are solids at room temperature, as the preparation of a polymerizable eutectic may facilitate their solvent-free polymerization as a viscous liquid at room temperature. It is critical to note that part of the appeal of using DES systems is they go far beyond simply solvent replacement—their use provides key benefits such as enhanced reaction kinetics and the production of polymeric materials with improved thermal and/or mechanical properties.

The scope of this review article is to examine not only the use of DES systems in polymer and materials science, but also the benefits their use provides in comparison to traditional solvent systems. A brief introduction to the preparation, physical and chemical properties of DES systems is provided, followed by an evaluation of their role in polymer science across numerous settings: polymer synthesis via various mechanisms (radical, reversible deactivation radical polymerization, ring-opening, anionic, polycondensation and electrochemical), polymer and supramolecular gel synthesis, porous monoliths, and molecularly imprinted polymers for sensing and detection. Wherever possible, a comparative focus is applied to equivalent syntheses using current (conventional) approaches, highlighting the appeal and diversity of DES systems.

2.  Preparation and Classification of DES Systems

One of the most appealing aspects regarding the use of DES systems is the simplicity of their preparation from typically inexpensive, abundant starting materials. DESs are regularly synthesized from the heating stirring of two or more solid starting materials [42][43], forming a clear, viscous homogeneous liquid at the eutectic composition. Other methods include grinding [43] (mixing and grinding solid components until a clear liquid forms), evaporation [44] (dissolving all starting components in water followed by subsequent removal of water via evaporation at reduced pressure) and freeze drying [45] (formation of an aqueous solution of all system components followed by freeze drying). Among them, heating and stirring below the melting points of the individual components is arguably the most convenient. 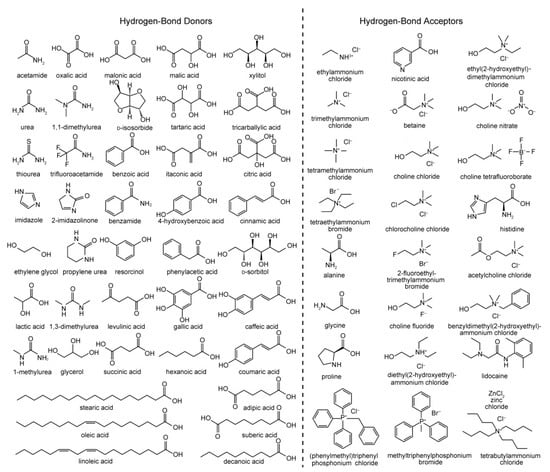 DES systems are typically classified into four categories (Types I–IV, respectively) depending on the type of components used [11]. Most DES systems (Types I–III) are based on quaternary ammonium, phosphonium or sulfonium salts with appropriate counterion (a Lewis base such as a halide) mixed with a relevant Lewis acid. Types I and II use non-hydrated (e.g., ZnCl2 [46]) and hydrated (e.g., CrCl3·6H2O [47]) metal halide salts, respectively, while Type III DES systems involve mixing quaternary ammonium salts with common HBDs such as alcohols, amines, and carboxylic acids such as those shown in Figure 1. Type IV eutectics combine metal halide salts with hydrogen bond donors. Type III DES systems are the most widely studied [48], in particular those based on ChCl as HBA as it is cheap, biodegradable, and cost-effective for large-scale use. Furthermore, the wide variety of amines, amides, alcohols and carboxylic derivatives available as HBDs, including those from bio-derived or natural sources, provide great potential for forming DES systems with tailored properties. DES systems can also formed from the mixture of HBDs, which can be termed “non-ionic” deep eutectic solvents [49].

The properties of DES systems can be readily changed depending on the method of preparation and the nature and purity of the participating components, such as: the chemical composition of the quaternary ammonium compound and HBD, the molecular size of the mixed species, their molar ratio, water content (if applicable), and temperature [50]. This makes DES systems particularly flexible in contrast to ionic liquids, which are essentially fixed in their composition. DES systems exhibit unusual solvation properties [9] and because of their tuneable composition, can be exploited in extraction and separation technologies for their potential to dissolve a wide variety of compounds. The nature of the components used to prepare DES systems typically renders them highly polar and hydrophilic; as a result, polar solvents such as water and methanol are miscible with commonly reported DESs, while common non-polar solvents such as toluene, hexane, diethyl ether are immiscible. Hydrophobic DES systems have emerged recently [51][52][53]; however, these are significantly less common. The ionic nature of most DES systems enables metal salts to readily dissolve, which has seen electrodeposition [54][55] and metal plating as some of the most common applications of these solvent systems [11].

Arguably the most striking physical property of DES systems is their very high viscosity (often >>100 cP at 298 K) in comparison to traditional small molecule solvents. The extensive hydrogen bonding network formed during DES synthesis results in the lower mobility of free species within the DES structure, resulting in the high viscosity observed [56][57].