Colorectal cancer (CRC) is a malignant disease with an incidence of over 1.8 million new cases per year worldwide. CRC outcome is closely related to the respective stage of CRC and is more favorable at less advanced stages. Detection of early colorectal adenomas is the key to survival. In spite of implemented screening programs showing efficiency in the detection of early precancerous lesions and CRC in asymptomatic patients, a significant number of patients are still diagnosed in advanced stages. Research on CRC accomplished during the last decade has improved our understanding of the etiology and development of colorectal adenomas and revealed weaknesses in the general approach to their detection and elimination. Recent studies seek to find a reliable non-invasive biomarker detectable even in the blood.

Colorectal cancer (CRC) is a serious heterogeneous disease that stands in third place in cancer incidence and represents the second cause of death in the world (nearly1.8 million patients newly diagnosed and 1 million patients who die every year) [1]. CRC has become predominant cancer in Western countries, which could be partially explained by the aged population and adverse lifestyle habits such as smoking, increased consumption of red meat and alcohol, lack of physical activity related to obesity, and diabetes, connected usually with low diversity of intestine microflora. Risk factors also include positive family history reflecting individual genetic equipment [2]. The screening programs aim to identify patients with precancerous lesions or those with resectable CRC stages 0, I, and II, who have a generally better prognosis than symptomatic patients with the pre-existing disease [3]. Despite screening programs, many patients are diagnosed in the stages III and IV of CRC that lead to a worse overall prognosis [4]. According to data from National Cancer Institute from the United States of America (USA) [5], five years survival rates for stage IV account only for 12% at colon cancer (CC) and 13% at rectal cancer (RC), while detection at an early stage I can increase the chance to survive up to 92% at CC and 88% at RC [6].

Several screening methods such as stool testing, blood testing, and endoscopic and radiological examination are currently available [7][8]. Polyps or tumors can manifest by microscopic bleeding (so-called occult bleeding). First-line test detecting occult bleeding is a fecal occult blood test (FOBT). Guaiac fecal occult blood test (gFOBT) detects hemoglobin (Hb) by peroxidase activity. Nevertheless, gFOBT is insufficiently specific to human hemoglobin and connected with a risk of false-positive results and omission of small polyps or non-bleeding polyps [7]. Despite its disadvantages, it has been able to contribute to a 33% reduction in CRC mortality [9]. Nowadays, gFOBT has predominantly been replaced by a fecal immunochemical test (FIT) based on antibody assay, which provides qualitative and quantitate results on Hb concentration per gram feces. Positive results of gFOBT or FIT are followed by endoscopic examination [8].

Endoscopic methods include colonoscopy examination, sigmoidoscopy, or capsule endoscopy. Colonoscopy is the main investigative method of the large bowel, this technique provides visualization of the entire large intestine, precise localization, biopsy, or complete removal of a potential precancerous lesion in a single session [10]. Early polypectomy leads to a 76–90% reduction in CRC incidence [11]. The weakness of this method is its invasiveness, it is an unpleasant procedure requiring several days of diet restriction and bowel preparation. These could pose an obstacle for many people, and among other things, it is expensive with the necessary presence of a very well-trained examiner [12].

Sigmoidoscopy compared to colonoscopy reduces time-consuming examination and patient discomfort and provides a lower risk of complications without the need for sedation, but allows investigation of only the rectum and the sigmoid. The study of sigmoidoscopy screening of individuals between 55 and 64 years in the United Kingdom (UK), indicated subsequent CRC incidence reduction by 33% and mortality by 43% [13].

Colon capsule endoscopy (CCE) is a non-invasive method suitable for individuals who are unwilling to undergo colonoscopy because of discomfort or any other obstacles. Meta-analysis showed that CCE for any polyp has a specificity of 89% and sensitivity of 73%. Though CCE is not as accurate as colonoscopy, it could decrease the need for its application [14].

CRC screening by radiology using computed tomographic (CT) colonography is able to visualize the entire colorectum and with no need for sedation. Even though it still requires bowel preparation, it is a relatively non-invasive method. This technique can detect only large adenomas and tumors with size ≥10 mm, nevertheless with sensitivity of 90% [15].

Screening methods based on blood testing were enriched by a highly promising biomarker, methylated gene septin9 (mSEPT9) in the last few years. mSEPT9 is released from CRC cells into circulation and is detectable in peripheral blood. A recent study showed that mSEPT9 assay, approved by Food and Drug Administration (FDA) in the USA, has a higher specificity (94.5%) than FOBT at advanced stages of CRC, but not at asymptomatic patients with early neoplasia [16][17].

Several types of a lesion can be histologically described from the colonoscopy biopsy. A colon polyp is a small clump of cells that forms on the lining of the colon epithelium. There are two main classes of polyps, non-neoplastic and neoplastic (Table 1) [18]. In general, the larger the neoplastic adenoma the greater the risk of cancer. Table 2 shows the recommended follow up after patient polypectomy [19][20][21]. Although the recommended surveillance guideline has been widely accepted, clinicians still detect the incidence of CRC (<10%) developed during the initial colonoscopy and the subsequent follow-up examination. This subgroup of CRCs is referred to as interval CRC (I-CRC) and represents one of the problems that screening programs face [22].

Table 1. Classification of non-neoplastic and neoplastic polyps and polyposis [18].

In the study by Brenner et al. [26], 10 years of cumulative risk of CRC among both sex with advanced adenomas increases from 25.4–25.2% at age 55 years to 42.9–39.7% at age 80 years. The development of carcinoma from adenoma tissue can last 5 to 20 years, and it is not influenced purely by one pathway [27][28]. This transition is a complex, multifactorial process that has been characterized by chromosomal instability (CIN), microsatellite instability (MSI), and DNA methylation in CpG islands areas (CIMP). All these pathways may overlap with each other and are responsible for genetic instability in adenoma that could undergo malignant transformation [29] (Figure 1). The events contributing to these processes are constantly subject to intensive investigations [28]. 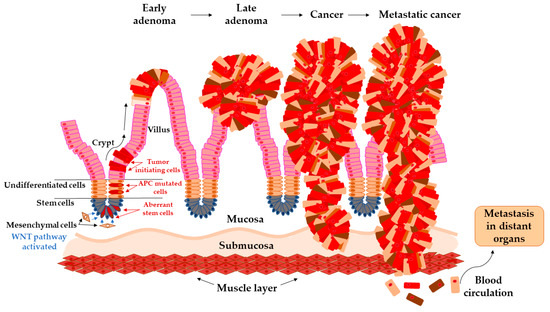 Considering the current knowledge about the CRC development and with an application of screening programs, we are still missing identification of patients with asymptomatic disease progression in early stages, where detection plays a key role in cancer survival. Recent studies seek to find new non-invasive biomarkers measurable even in early stages of CRC from an area of non-coding RNA, inflammatory biomarkers, or cell-free DNA [30].

2. Transition of Adenoma to Carcinoma in Colon

The colon epithelium is constantly and rapidly renewing tissue. Old cells on the top of the villus are released into the lumen and replaced with new cells raised from colonic crypts. On the bottom of colonic crypts are stem cells that proliferate and differentiate into the cellular compartment of colon epithelium [31]. Vogelstein et al. [32] proposed the classical model of tumor evolution in the large bowel (Figure 1). Cells with high WNT signaling activity arise from aberrant crypts and evolve into a tubular or tubule-villous polyp. The subsequent proliferation of polyp may lead to the development of early adenoma with a low grade of dysplasia. Early adenoma expanses into advanced adenoma with a high grade of dysplasia and with increasing accumulation of mutations in daughter cells progressing ultimately further into carcinoma [2][32][33].

Each mutation that provides tumor cell-selective growth advantage is called driver mutation. This advantage slightly increases the growth rate of clonal expansion around 0.4% and is increasing with every new driving mutation [34]. Driver mutations enhance the accumulation of a large number of somatic mutations due to altering the cell condition and reduce the population fitness landscape. The predominant mutations, so-called passenger mutations, are mutations without selective growth advantage. With each clonal expansion of cancer cells, heterogeneous passenger mutations are generated that constitute the enormous variations of unique tumors [35].

Thanks to the next-generation sequencing (NGS) technique, thousands of mutations in the human genome were identified and some of them contribute to malignant evolution [36]. The driver mutations in the APC gene, predominantly frameshift at codon 1,554 [37], provide cell-selective growth advantage [32], and cause loss of cell ability to control the concentration level of protein β-catenin in the cytoplasm. β-catenin implements in the WNT signaling pathway and its concentration imbalances lead to uncontrolled growth and cell division [38]. Following mutations in TP53 or SMAD4 genes induce transformation into a malignant tumor, which overgrows into basal tissue and has an ability to metastasize into lymph nodes and distant organs [28].