The contemporary displacement measurement systems used in geotechnical laboratories during the determination of soil precise mechanical parameters, (e.g., the shear modules G: initial and in the range of small and very small strains) are not universal and their use depends on the type of soil (cohesive, non-cohesive), its condition (loose or dense, stiff or very soft), and its characteristic properties (e.g., organic soil, swelling soil).

The correct and precise determination of soil mechanical parameters  in a controlled and homogeneous state of stress and deformation is an essential element of geotechnical and engineering design. It is worth paying attention to the use of “older” (from the 1970s) measuring systems in “newer” applications and to the latest, interesting solutions (in relation to strain measurement and results analysis) in geotechnical laboratories. The gradual development of measurement methods is primarily related to technological progress, which results in newer sensors and methods of data recording using induction phenomena (conductors, semi-conductors), resistivity, photoelectricity (lasers), piezoelectricity (piezoelectric crystals) and other combinations of different phenomena. The reference point in a geotechnical laboratory is usually a triaxial apparatus, considered by most researchers to be the mother of other devices that use and adapt its modern solutions. Traditional measurements of the axial deformation of the samples tested in the triaxial apparatus, carried out outside the cell, introduce significant errors in the calculation of the deformations [1]. Due to this, various types of internal displacement measurement systems began to develop, allowing to directly measure the deformation of the sample itself in its central zone (omitting the disturbance zone at the point of contact of the sample with the base and the top cap).

There are two main groups of measurement systems: measurements covering the whole sample and local measurement, in which the sensors are inside the test cell. Local sensors may be attached to the sample (contact sensors, e.g., local deformation transducers (LDT), linear variable differential transformers (LVDT)), or not (non-contact sensors, e.g., proximity sensors (PT)). All soil measuring systems were originally dedicated to cylindrical samples in a triaxial apparatus. It is also worth noting that the accurate measurement of radial deformation is more difficult than that of the axial one, as the radial boundary of a specimen which is in the rubber membrane, is less rigid and produces less uniform measurements. Over time, these methods are modified and improved, especially those related to the measurement of radial deformations. For example, two new radial strain measurement devices were proposed by Chen et al. [2][3]. One of them is a system composed of two LVDTs mounted horizontally on a pair of yokes which are glued on the diametrically op-posite sides of the specimen [3]. The second is the compass-type mechanism (so-called floating) composed of two metal legs connected by a hinge and two FBG sensors. An added advantage is that the multiplexing capacity of FBG sensors enables the simultaneous measurement of strain or temperature at multipoints along one fiber line [2].

Another type of small deformation transducer (SDT) based on fiber Bragg grating sensors was proposed by Xu [4]. Xu showed that the SDT can be used for local deformation measurements (only the axial strains) of soil specimens in a modified triaxial apparatus as it has obvious merits such as light weight, high accuracy, resistance to cor-rosion and ease of handling [4].

The new magnetic encoders system with Fiber Bragg Grating (FBG) is another interesting proposition for researchers. This system is based on the Hall effect, with a wave re-ceiver outside the triaxial cell, which eliminates the need for using cables [5][6]. The mounting elements from the LVDT system were using in this solution.

The following ranges of deformations [7] have been experimentally distinguished: very small deformation (<10−5), small deformation (10−5–10−2) and large deformation (> 0.01), in which the modulus values (shear modulus, G, modulus of elasticity, E, and bulk modulus, K) are different. A similar situation exists in the case of Poisson’s ratio, which is also not characterized by a constant value, as many engineers believe [8]. Each deformation area corresponds to a different apparatus and the method of strain measurement, both laboratory and field (Figure 1, based on [9][10][11][12]). The importance of the small and very small strain zone is proved by the fact that the deformations that occur in the subsoil for most geotechnical design issues, e.g., retaining walls, underground structures (tunnels), and large-area foundations, are contained in the range of small deformations. Including the modules at large deformation in the geotechnical calculations leads to unnecessary oversizing of the structure [13]. 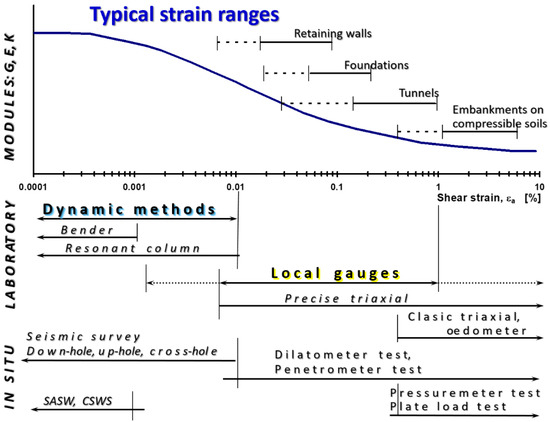 Figure 1. Approximate strain ranges corresponding to various measuring techniques of soil stiffness characteristics in laboratory and field tests, with the strain range marked by the typical geotechnical construction work (on the basis of [9][10][11][12]).
As a result of laboratory tests, the full variability of strain modules (G, E, K) can be obtained with a minimum test set, which is a precise triaxial apparatus with local strain measurement (contact or noncontact sensors) and the bender elements (BE) mounted in its pedestal and cap. In this way, it is possible to resign from complicated tests in the resonance column. In the final analysis, the missing part of the graph can be adjusted knowing its initial value (Gmax, Emax, Kmax from acoustic wave measurement-bender elements) and its further part based on the local measurement of deformations as shown in Figure 2. 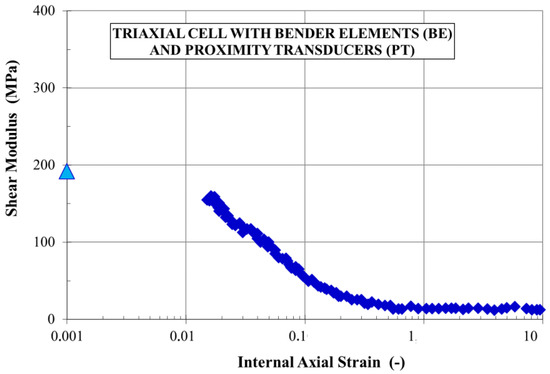 3. Localisation and Development of Deformations in the Sample

Another group of experiments is related to the need for increasingly accurate registration of the localisation of deformations and the analysis of their development in a sample (material) under load, not only in geotechnics, but in the entire construction engineering. This issue is closely related to technological development and new opportunities. During several decades, new methods of recording displacements have appeared, based on optical (graphic) measurements, measurements using X-ray, thermal, electromagnetic, and other radiation. These methods are called “full-field methods” in experimental mechanics. Although they are included in the so-called internal systems, it should be remembered that all devices (video cameras, laser sensors, tomographic scanners) taking readings of deformation changes are located outside the test cell, not inside.

The use of the PIV (DIC) method is widespread to identify the strain localization in loose materials (e.g., biaxial apparatus - element tests; [44][45] and in modeling the behavior of granular soil be-hind a retaining wall (model test; [46]). By combining the PIV method with digital photography and the discrete element method (DEM), it is possible to analyze granular media on the microstructure (single grain) level. In addition Hosseini et al. [47] and Srokosz et al. [48] showed the good agreement of the results obtained withstandard strain measurements with LVDT sensors and digital image correlation methods.

Stereophotogrammetry, which is a type of photogrammetry, is a technology that al-lows to reproduce the shape, sizes, and mutual position of objects in three-dimensional space on the basis of a photo pair (stereograms). Most often, photogrammetry is associated with aerial photogrammetry (a wide coverage area), but it is also used for special purposes. In the geotechnical laboratory, stereophotography uses optical devices to measure the full-field displacement of a sample under loading [49][50]. It can be, for example, a system of two cameras placed on both sides of the sample, which at the same time record changes in two different planes. Stereophotogrammetry also helps to assess the influence of bending con-ditions and sample slenderness on the formation of various shear bands (bifurcation phenomenon, [51].

Currently, researchers are using photogrammetry in a triaxial tests [52][53][54][55] and in torsional shear tests on a hollow cylindrical specimen [56].

The first application of X-ray tomography in soil mechanics was in the early 1960s in Cambridge as a noninvasive technique for measuring strain field in soil which was documented by the Roscoe’s group [57] and later by Arthur [58]. From the early 1980s, this method was developed intensively by the researchers’ the group from Laboratory 3S-R in Grenoble (e.g., [44][59][60][61]) and later by Alshibli et al. [62].

One example of the use of X-rays in a geotechnical laboratory is the combination of a triaxial apparatus with a scanner (called TOMOTRIAX [50][63]). With such a device, it possible to carry out the experimental investigations of strain localization in sands.

The next stage of technological development in full-field analysis is the use of the synchrotron in soil research as a device combining three basic advantages: generation of much stronger X-rays, more precision and scanning speed. Higher energy and stronger photon beams result in higher image resolution, even to the micrometric scale. Such accuracy may not be as important in the case of coarsegrained soils, such as sand, for which the width of the shear band is about 10-20 grain diameters (about a few millimeters). However, it is important during the test deformations in finegrained soils, e.g., clays, in which grains are much smaller, and thus the shear bands are definitely narrower.

X-ray tomography and image recording occur at the same time as loading the sample, without stopping the press while scanning. In Europe, since 2003, the three test stands (called Microtomotriax) are provided on the ID15 test line (ESRF-EBS: European Synchrotron Radiation Facility—Extremely Brilliant Source), for triaxial tests on samples from rocks and cohesionless soils.

4.1. Analysis of the Results—Combined X-ray Tomography and 3D DIC (V-DIC)

The X-ray tomography technology opens up new possibilities for understanding soil mechanics (in three-dimensional space), due to its high resolution and thus the possibility of analyzing the kinematics of single soil grains and interactions between all grains in the entire sample volume, during the loading process [59][63][64]. This method is not perfect, because in some cases it is difficult to trace the shear plane which is only visible if they are high compaction or loosening (dilatancy or crack opening) in its zone. Such a limitation can be overcome by complementing X-ray computed tomography with 3D/continuum volume/discrete volume digital image correlation (DIC/CV-DIC/DV-DIC), which is a mathematical tool to define the best mapping of an image into another.

Although each of the optical methods (video cameras, laser sensors, tomographic scanners) has been developed for many years (laser sensors are relatively the youngest; the first mention of them appeared in 2004 (e.g., [65][66]). The optical distortions of the sample recorded image are their most serious disadvantage. For this reason, e.g. Messerklinger et al. [66] and Srokosz et al. [48] introduced many modifications to the triaxial apparatus (e.g., changing the cell shape from cylindrical to cuboid, using contrasting colors of the grid with marks on the sample and illumination with an LED lamp). Generally, it was seen that radial strain measurement with the laser scanning the device turned out to be more precise in the range of small and very small strain.

Among the modern measurement systems, there are many interesting solutions related to the modernization of research devices. For example, they are: