Arboviruses are known to cause large-scale epidemics in many parts of the world. These arthropod-borne viruses are a large group consisting of viruses from a wide range of families. The ability of their vector to enhance viral pathogenesis and transmission makes the development of treatments against these viruses challenging. Neutrophils are generally the first leukocytes to be recruited to a site of infection, playing a major role in regulating inflammation and, as a result, viral replication and dissemination. However, the underlying mechanisms through which neutrophils control the progression of inflammation and disease remain to be fully understood. In this review, we highlight the major findings from recent years regarding the role of neutrophils during arboviral infections. We discuss the complex nature of neutrophils in mediating not only protection, but also augmenting disease pathology. Better understanding of neutrophil pathways involved in effective protection against arboviral infections can help identify potential targets for therapeutics.

Neutrophils are the most abundant leukocytes in the blood. They serve as the first line of defense against incoming pathogens, quickly mobilizing to the site of infection [1]. While neutrophils can have protective immunostimulatory activities, they can also have debilitating immunosuppressive activities by inhibiting T cell functions [1][2][3]. In addition, some viruses such as influenza, specifically H5N1, and West Nile virus are known to infect and replicate within neutrophils, using these cells as reservoirs for dissemination, although mechanisms involved in this phenomenon remain unclear [4][5].
Arthropod-borne viruses or arboviruses have a unique effect on neutrophil function since viral factors as well as vector factors can affect the activity of these cells. Arboviruses are a diverse group of viruses [6][7][8]. They are transmitted through blood-feeding insects such as mosquitoes and ticks, and include viruses such as chikungunya virus (CHIKV), dengue virus (DENV), West Nile virus (WNV), Zika virus (ZIKV), yellow fever virus (YFV), and eastern equine encephalitis virus (EEEV). This group of viruses have been known to cause significant morbidity and mortality around the world, with the potential to spread quickly and expand their geographical range due to their distinct mode of transmission using arthropods. Furthermore, the changes in climate and increase in urbanization help augment transmission and infectivity of these viruses [9][10][11][12][13][14][15].
The heterogeneity among this exceptionally large group of viruses makes developing therapeutics challenging. Neutrophils are generally the first to infiltrate infected sites. However, the role of these cells during viral infection is not yet fully understood [16]. Targeting neutrophil pathways or proteins that activate or suppress neutrophils can serve as a useful strategy for drug and vaccine development. In this review, we highlight the recent advancements in understanding the beneficial and detrimental nature of neutrophils during arboviral infections.

Ticks and mosquitoes enhance disease severity as well as transmission of many viruses [17][18][19][20][21]. Mosquitoes are the most common type of arthropods that spread diseases including malaria, dengue, West Nile, Zika, and chikungunya fevers. Mosquito-transmitted diseases affect hundreds of millions of people each year, resulting in about 750,000 deaths every year [22][23][24][25]. Mosquito saliva can promote viral replication and dissemination through neutrophil-mediated mechanisms (Figure 1). 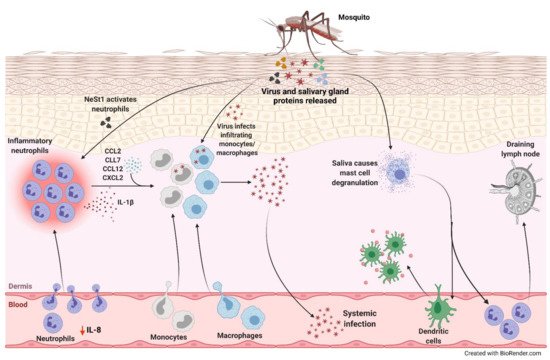 Figure 1. Neutrophil-mediated viral replication and dissemination induced by mosquito saliva. During a blood meal, mosquito carrying an arbovirus injects the virus along with its salivary gland proteins below the skin of the host. There is a decrease in IL-8 levels in the serum correlating to lower number of circulating neutrophils and higher number in the skin. One of the proteins in the saliva, neutrophil-stimulating factor 1 (NeSt1), activates the neutrophils in the dermis, the deepest layer of the skin, which houses the immune cells. IL-1β is secreted by these inflammatory neutrophils to establish cutaneous response to the bite. Additionally, bite-associated monocyte/macrophage-attracting chemokines, CCL2, CCL7, CCL12, and CXCL2, are upregulated. The infiltrating monocytes and macrophages are permissive to infection enhancing viral replication and increasing the potential for systemic spread. The mosquito saliva also causes vascular permeabilization and mast cell degranulation in the skin recruiting dendritic cells to the bite site, contributing to the inflammation, and neutrophils to the draining lymph nodes. 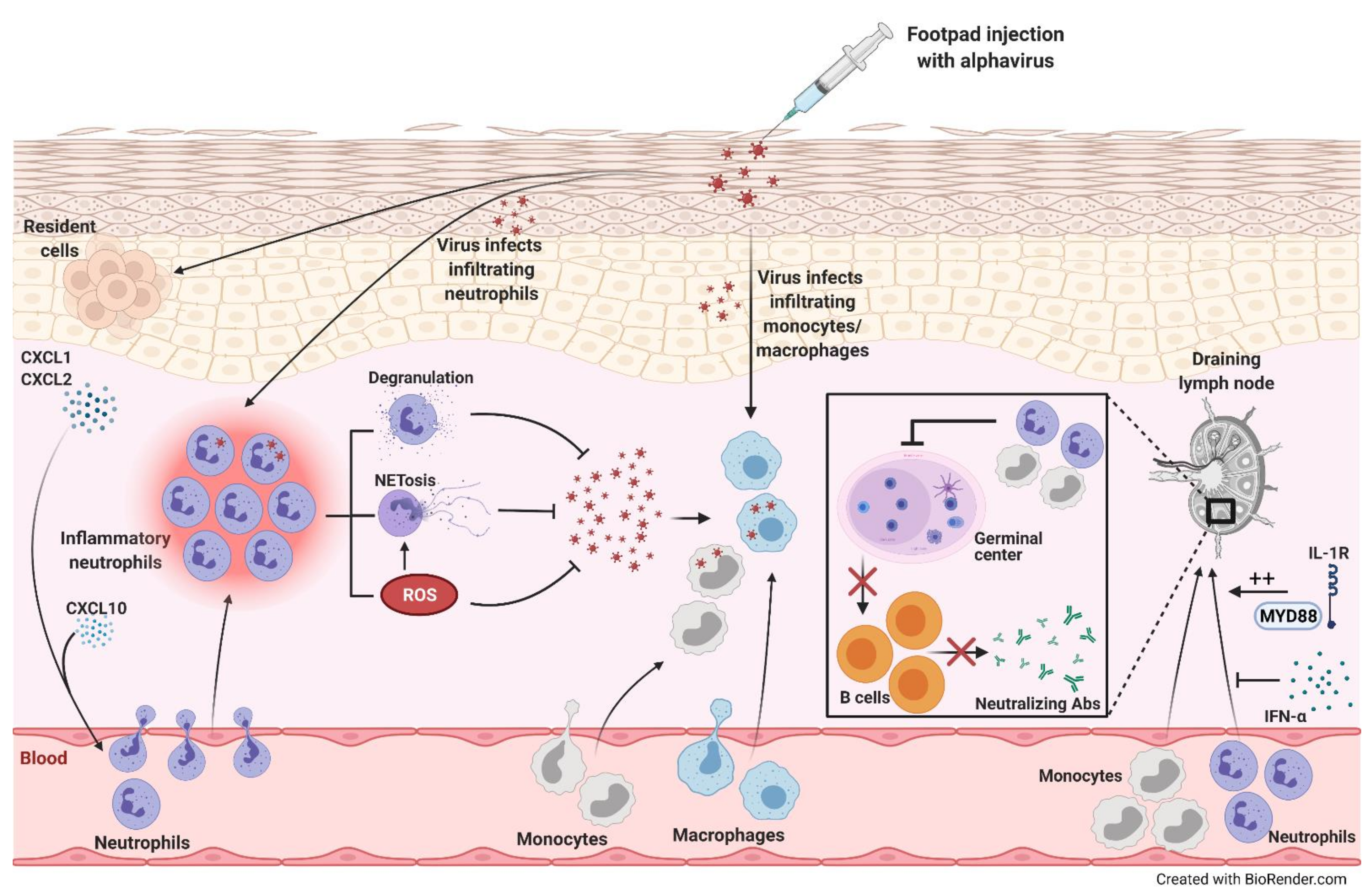 Neutrophils are key players in the immune system, being the most abundant leukocytes. They are one of the first responders to the site of infection. However, the heterogeneity of their roles and the variability from one infection to another makes it difficult to determine if the effects will be beneficial or detrimental to the host (Table 1). Arboviruses not only induce neutrophil-mediated inflammation using viral factors but also through factors in their vector, adding another level of complexity. Their mode of transmission through arthropods immensely increases the rate at which they spread, highlighting the need for better understanding of the underlying mechanisms involved in pathogenesis. During arboviral infections, the time and amount of neutrophil infiltration to the site of infection may have a significant effect on the outcome. Following infection, an early influx with a high number of hyperactivated neutrophils releasing high levels of IL-1β, ROS, and NETs may augment infection and disease. However, an influx at later stages of infection may be protective. Regularly causing epidemics in the vulnerable areas of the world, arboviral infections need to be controlled with unique therapeutics that can control the vector-mediated and virus-mediated symptoms. Neutrophils are implicated in disease pathology induced by arboviruses and their vectors, making them a potential therapeutic target. In-depth understanding of the neutrophil pathways involved may be crucial for successful treatment of arboviral infections.