The term Face Cognition (FC) describes a set of specific abilities related to the processing of faces, including face perception and face memory.

Faces are a source of information of paramount importance to social interaction from an evolutionary viewpoint [1]. Therefore, it is not surprising that specificity of face cognition (FC) has been widely accepted [2][3], but it’s origins remain a matter of debate. Some researchers propose that FC is a specific ability due to properties such as heritability, specialized neural structures involved in FC and the possibility of isolated FC impairment in the sense of double dissociation from other visual object processing abilities [4][5][6][7]. In contrast, proponents of the expertise hypothesis hold that faces are objects all adults have grown up to be experts with, and that expertise is the true driving force giving rise to any object processing specificity [8][9] .

In individual differences research, specificity of an ability describes the occurrence of a pattern of between-person correlations in task performance. If performance scores in different cognitive tasks are highly correlated, it suggests a common underlying cause. Performance in various face tasks correlate more with each other than with performance in non-face tasks. Such between-person variance patterns can be investigated using structural equation modeling (SEM).

Cognitive ability research encompasses performance measures from difficult and easy tasks. Accuracy is typically measured in difficult tasks and operationalized as the proportion of responses. Easy tasks, on the other hand, are usually solved correctly by most individuals; thus, accuracy is usually at ceiling and response times (RTs) are investigated instead.

Wilhelm and colleagues [10] first discovered a differentiation in the ability structure of accuracy- versus speed-based FC measures acquired from difficult and easy FC tasks, respectively. The authors asked their participants to solve tasks of face perception and face memory tasks in easy and difficult conditions and investigated the underlying ability structure using SEMs. While accuracy measures were specific (i.e., individuals could be accurate in difficult face memory tasks but inaccurate in difficult face perception tasks), performance speed in easy tasks was strongly related and indistinguishable across all tasks).

Whereas the differentiated structure of FC accuracy in difficult tasks seems to be a clear and robust finding across studies, waters are muddier in the case of FC speed. Some studies found face specificity in speed tasks, some studies reported a unitary factor of performance speed like Wilhelm and colleagues [10].

To carve out which task properties result in face specificity in easy tasks and which do not, Meyer et al. [13] compared task characteristics across studies. The authors find that the difference lies in whether SEMs are based on performance in several trials of the same task, or whether SEMs are based on different tasks. In studies reporting no specificity for faces in RTs, multiple tasks had been employed. For example, Nowparast Rostami et al. [14] modelled speed across a battery of face and house perception and memory tasks. In studies finding face specificity in RTs on easy tasks, performance was modelled within the same or similar tasks. For example, Ćepulić et al. [15] used the same kind of recognition task but varied the number of stimuli to be remembered and the content of the stimuli (faces vs. different kinds of objects).

Meyer et al. [13] explain the divergence of results as follows: If multiple tasks are jointly modelled, the latent factors of the SEMs represent common factors underlying all the tasks. Thus, in difficult FC tasks, a common face perception or face memory ability is employed. In easy tasks, however, there clearly seems to be face-specific variance, but it seems to be also task-specific. Thus, whereas there is a common underlying FC-related ability influencing performance in various difficult tasks, the underlying FC-related abilities in easy tasks are less associated with each other. In other words, the face-specific speed abilities show less overlap. Therefore, there is face specificity in easy tasks, but it is only visible if the task performance is modelled alone. According to the authors, this explains why studies find face-specific factors of speed in single easy tasks, but not when jointly modelling multiple easy tasks (see Figure 1). 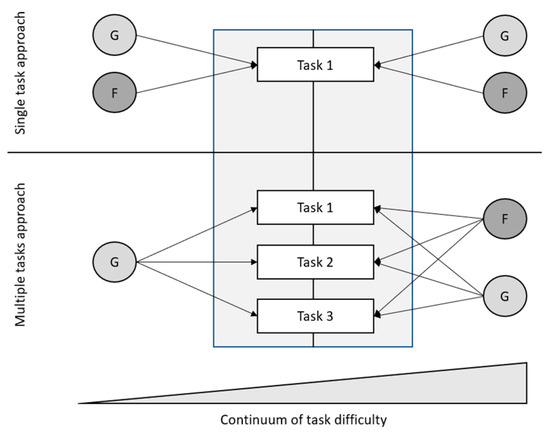 Figure 1. Face specificity in single vs. multiple FC tasks of increasing difficulty. Circular shapes represent underlying abilities (constructs) while angular shapes represent observed performance scores. G—general factor; F—face-specific factor. Task 1–3—these represent possible tasks as proposed in FC research, such as tasks constructed by Herzmann et al. [18] and applied by Wilhelm et al. [10]. These tasks are not all on the same difficulty level; rather, the tasks position on the easy–hard continuum influences the ratio of task-specific vs. task-independent face processing ability it taps into, represented as face-specific factors in the figure. Figure taken from Meyer et al. [13]