A virtual reality (VR) platform generates a computer-simulated environment that is fostered and assisted by the head-mounted display (HMD), which utilizes a manipulator in an immersive environment. VR is broadly used for cognitive purposes in various industries in the fields of engineering, architecture, and medicine. Software makers are also in the perspective of introducing virtual stores where consumers can enter the virtual stores and visualize the dimensions and usability of an item prior to purchasing it. A virtual shopping store is a computer-simulated store where a handler can envisage, feel, and interact with the products and items in the store. Implementation of the virtual store can be a breakthrough in the e-commerce market. Other famous terms for virtual stores are cybernetic stores and computer-simulated 3D spatial stores. In current e-commerce stores, one of the recorded fraudulent activities is the delivery of an ordered item different from that itemized in the e-commerce store. Needless to say, a virtual store can spark a revolution in the e-commerce industry by not only altering the way of shopping but also by making it secure.

Smart cities are described according to the classification system model and established on six pillars: smart social and mobility system, intelligent urban management, smart economic environment, dedicated lawful structure, smart e-governance, and sustainability of lifestyle. Gómez et al. define a smart city to be a city occasioned from urban development exploitation sensors and scientifically unconventional tools and systems [1]. Azraff Bin Rozmi, et al. [2] state that sustainability deals with the intricate relationship between the survival of human life in accordance with changes in the economy, culture, government policies, and infrastructure in an urban milieu [3].

Proposals for smart cities are frequently rehabilitated, bearing in mind the cyclic process in harmony with the decision-makers views to implement pioneering solutions anticipated by connoisseurs and relevant mavens. Alessandro et al. endorsed that the sequence of a system with the connectivity of haptic devices, machine learning, VR, and artificial intelligence needs to be adopted while creating forthcoming verdicts in smart cities [4][5]. Gaffary, et al. [6] propose that the advent of VR and haptic devices can effectively assist urban planners in smart cities in decision making and introducing innovations. The interaction between the components in a smart city framework is shown in Figure 1. 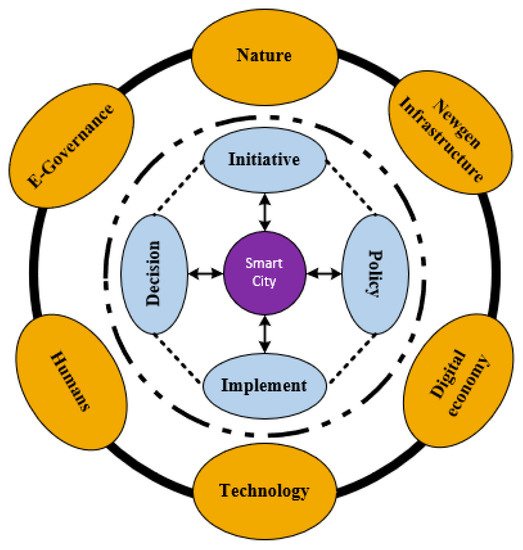 According to Akhtar, et al. [7], VR systems will be an integral part of the smart city concept and might assist in replacing mass tourism with digital tourism. Paszkiewicz, et al. [8] term the usage of VR systems as the best option to teach industry 4.0 standards in engineering education. Nasralla [9] uses the term virtual smart cities and states that a sustainable VR patient rehabilitation system should be created using IoT technology and machine learning on time series to identify features that support sustainability and rapidly detect problems without interrupting rehabilitation services. Ospina-Bohórquez, et al. [10] suggest that the synergy between VR and multi-agent systems is a pathway to accomplish sustainability in a smart city framework.

Rossi, et al. [11] revealed that haptic devices operate based on the instructions provided to them and work on the proprioceptive feedback topology. Proprioception, from the Latin terms “prospruis” (one’s own) and “căpio” (to attain), is the aptitude of the maneuver to obtain the activity information of the body. The authors further emphasize that the inclusion of proprioceptive feedback into the haptic interface can avoid the visual contact problem [12][13][14]. In their work, the researchers introduced a novel design termed “HapPro design” for the haptic device. The device is in the form of an arm that can be used on persons with disabilities to assist them in performing their tedious responsibilities. In designing the “HapPro”, both the linear and angular physical quantities are considered. The control strategy of the “HapPro” includes haptic feedback on the human EMG signal that helps control the soft hand placed on persons with disabilities. Experimental protocol and results present improvements in control with and without logarithmic mapping. With logarithmic mapping, efficiency is boosted from near 40% to around 80%, thereby doubling the improvement.

Sierra M, et al. [15] showed the application of the haptic interface in prosthetics. Shi, et al. [16] proposed the application of the haptic interface device and used both the purely mechanical system and the coupled hydraulics-based mechanism. The results indicate that the hydraulic and fluid flowing systems can be used in haptic feedback. Pistohl, et al. [17] show the control of a cursor on the desktop screen via EMG sensor signal with and without a proprioceptive feedback approach. The EMG signal is measured from the muscles of the left hand, and proprioceptive feedback is obtained from the right arm. The results showed that additional feedback is not required when the proprioceptive approach is used. However, in the present research, a haptic device is introduced that has the ability to assist customers in virtual stores since the weight of the object being ordered can be realized to have some influence on the perception of the product. This approach is useful to improve the satisfaction level of e-customers.

The notion of “heaviness and lightness” was first deliberated in the 6th century by the ancient Greek philosopher Plato. According to Georgakopoulos and Quigg [18], Plato termed weight to be the natural propensity of an object, and this physical property of heaviness and lightness is associated with all objects on earth. Later, Euclid of Alexandria, renowned as the “father of geometry,” became the foremost Greek mathematician who described weight to be “the heaviness or lightness of substances relative to other substances and is measured by a balance.” Brain Bowers specified that in the 17th century, a major advancement was recorded when Galileo proposed a scheme to measure the weight of a stirring object. In due course, Galileo figured out that weight was proportionate to the extent of substance in an entity. In modern science, the weight (vector quantity; the direction toward the earth’s center) is thought to be the force resulting from gravitational action, whereby mass (scalar quantity, no direction) is equal to the matter quantity in an object. Sumit and Akhter [19] detailed that the primary maneuver to ration the weightiness of a body was christened as “Spring Balance” and was formed in 1770 by Richard Salter in Britain [20].

According to Ackerman and Seipel [21], in 1843 a British physicist named Sir Charles Wheatstone assembled a device dubbed as the “Wheatstone Bridge.” The created device was capable of computing an unknown resistance magnitude. Far along in the 19th century, strain gauges were industrialized. By means of the latest expertise at that time, the perception of fabricating a load cell with a Wheatstone bridge arose into training. Replacing one leg resistor in the Wheatstone bridge with piezoelectric substantial resulted in varying voltages that corresponded to the applied weight. Bar, et al. [22] depicted that “variation in weight resulted in voltages across the Load cell terminals” is the approach that is eliminated nowadays in almost every weight measuring device. As the object is placed on one of the bridge’s leg, the corresponding voltage fluctuates and the modification in voltage is amplified and processed in a microprocessor device across some typical scale to acquire the exact weight value of the object. This principle of load cell composition is used in the tele-weight device.

VR has recently become a trend in shifting technology. Over the last few years, it has been used for cognitive purposes. However, topical enhancements in half-life [23] and gaming engines have shifted the trend in fashioning VR stores to provide a better shopping experience. According to Hung, et al. [24], virtual stores are gaining in popularity and people are choosing to have a virtual shopping environment. Huang, et al. [25] suggested that considering all the impending trends and gaining customer satisfaction is imperative for the e-commerce market to meet errand requirements. Scarle, et al. [26] indicated that fraudulent activities are gaining a new level along with the trend.

One primary problem highlighted in this research is that the current virtual store experience is not immersive, and even with the utilization of haptic sensing e-commerce customers are unable to have a better overview of the object prior to purchasing. The key goal of this research is to introduce the idea of a tele-weight device that can enhance the user’s immersive experience by letting the customer realize the weight of an item ordered in the virtual store. The idea is implemented in the form of a prototype, and the relevant details and results are discussed in this work.