Heterosis utilization is very important in hybrid seed production. An AL-type cytoplasmic male sterile (CMS) line has been used in wheat-hybrid seed production, but its sterility mechanism has not been explored. In the present study, we sequenced and verified the candidate CMS gene in the AL-type sterile line (AL18A) and its maintainer line (AL18B). In the late uni-nucleate stage, the tapetum cells of AL18A showed delayed programmed cell death (PCD) and termination of microspore at the bi-nucleate stage. As compared to AL18B, the AL18A line produced 100% aborted pollens. The mitochondrial genomes of AL18A and AL18B were sequenced using the next generation sequencing such as Hiseq and PacBio. It was found that the mitochondrial genome of AL18A had 99% similarity with that of Triticum timopheevii, AL18B was identical to that of Triticum aestivum cv. Chinese Yumai. Based on transmembrane structure prediction, 12 orfs were selected as candidate CMS genes, including a previously suggested orf256. Only the lines harboring orf279 showed sterility in the transgenic Arabidopsis system, indicating that orf279 is the CMS gene in the AL-type wheat CMS lines. These results provide a theoretical basis and data support to further analyze the mechanism of AL-type cytoplasmic male sterility in wheat.

Plant cytoplasmic male sterility (CMS) is a maternally inherited trait maintaining female fertility but producing abortive pollen. CMS is widespread among plants and widely used to produce hybrids with significant heterosis [1]. CMS is usually associated with chimeric open reading frames (ORF) caused by mitochondrial genome reorganization [2][3][4]. In many cases, pollen fertility of the CMS plants can be restored by corresponding nuclear-encoded fertility restorer genes which indicate that CMS is an ideal model system to study nuclear-cytoplasmic gene interaction [5]. Much progress has been made in the molecular mechanism of CMS and fertility restoration in plants. Many novel chimeric mitochondrial genes have been identified and are responsible for CMS through a variety of mechanisms (such as orf79/orfH79/WA352 from rice, urf13/orf355 from maize, pcf from petunia, orf224/orf222 from rapeseed, etc.) [3][6][7][8][9][10][11][12][13]. The fertility restoring genes are present in the nucleus, and most of them are triangular pentapeptide repeat (PPR) proteins (such as Rf1a and Rf1b to orf79 in rice, Rf-PPR592 to pcf in petunia, etc.) [8][14].
There are three main types of CMS in wheat, i.e., CMS-T, CMS-K, and CMS-V [15]. Orf256, located upstream of COXI, might be the sterility gene in the CMS-T type plants [16][17]. Eight restorer genes (Rf1-Rf8) for CMS-T type have been mapped on Chromosome 1A, 1B, 2D, 5D, 6B, 6D, 7B, and 7D; and five (Rf1, Rf2, Rf4, Rf5, Rf7) of them originated from T. timopheevi [18]. Rf1 and Rf3 of CMS-T type can cleave the mitochondrial gene orf279 and restore fertility in transgenic wheat [19]. There are large repetitive units in the mitochondrial genome of the CMS-K type line; however, the maintainer line is similar to the Chinese Spring wheat [20]. CMS-AL, another type of male sterility derived from the F2 of Bainong 71-22 × Xinong 73 (36) 9-1-16, produced 100% sterile pollens; and its restorer, Bainong 86T2026, has strong restoring ability controlled by a single dominant gene. 99AR144-1 can restore the fertility of AL18A, studies have shown one major QTL (Chr1B) and one minor QTL (Chr5A) in 99AR144-1 [21]. AL18A is an excellent sterile line with a certain angle of glume opening, stigma partly exposed, and strong vitality and long duration. The natural outcrossing rate of AL18A is 65.02%, which is good for hybrid seeds production [22]. Using the AL-type CMS line AL18A, a wheat hybrid line Xindong 43 has been produced [23]. Their cytoplasm was believed to be originated from the common wheat variety “Huixianhong”, however, the molecular genetic mechanism of this CMS line is still not clear. In the present study, we sequenced the mitochondrial genomes of AL18A and its maintainer line AL18B and identified the candidate genes for AL-type CMS in wheat. Our results provide further insight to elaborate the mechanism of AL-type CMS in wheat, and the CMS gene could be used to design molecular markers to facilitate the application of AL18A in heterosis utilization and breeding in wheat.

3. The Wheat AL-CMS Line AL18A Is the Typical Sterile Type

The seed setting rate of the AL18A was calculated to confirm its sterility. Selfing of AL18A produced no seed; however, an AL18A × AL18B cross showed a 90% seed set (Figure S1). The pollens of AL18A were abortive, but the pistils were normal. By I2-KI staining, it was found that the mature pollens of AL18A were smaller and lighter as compared to that of AL18B. Scanning electron microscope (SEM) was used to examine the inner and outer walls of anthers and pollen grains from AL18A and AL18B. Results revealed that the pollen grains of AL18A were shriveled and shrunken; however, no significant difference was detected between the inner walls of the anthers from AL18A and AL18B, respectively (Figure 1A). The earliest abnormal anther of AL18A was observed through the paraffin sectioning at the monocyte vacuole stage. The tapetum cells of AL18A also had delayed cell collapse compared to AL18B (Figure 1B). The pollen grains of AL18A showed abnormal nuclear division and light color staining at the bi-nucleate stage, which might have seized its development because of which the tri- nucleate stage was not detected (Figure 1C). These results suggested that the AL18A showed a typical type of pollen abortion. 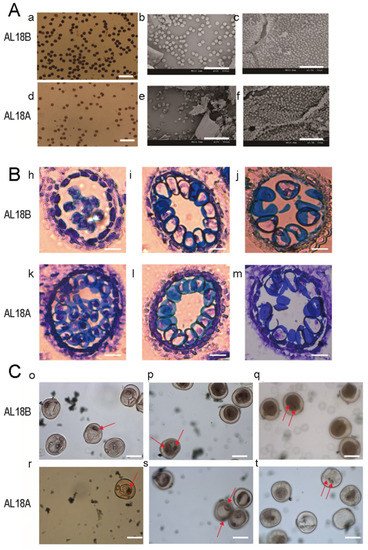