Cleft lip and/or palate (CLP) is a craniofacial malformation with a prevalence in newborns of 14 per 10,000 live births worldwide.

Cleft lip and/or palate (CLP) is a craniofacial malformation with a prevalence in newborns of 14 per 10,000 live births worldwide [1]. Although not yet fully understood, several genetic and environmental risk factors are associated with CLP [2]. Smoking, gestational diabetes, and genetic association with the IRF6, VAX1, and PAX7 genes are consistently reported [3][4]. Most CLP patients have several hearing, feeding, speaking, and dentofacial development complications, leading to a long-term impact on the patient’s facial anatomy and self-esteem [5][6].
One of the endpoints in CLP care is a secondary bone graft, which presents several benefits such as support of unerupted teeth that will erupt into the bone graft, support of alar bases (promoting nasal and lip symmetry), closure of oronasal fistulas and cleft maxillary segments stabilization [7][8][9]. The bone graft is usually performed when the canine has one-half to two-thirds root formed. Since its introduction by Boyne and Sands in 1972, autologous bone graft using cancellous bone remains the gold-standard until today [10]. Cancellous bone grafts have abundant osteogenic surface cells, which allow new bone formation [11]. The origin of the autogenous bone graft depends on numerous factors, namely, the surgeon’s experience, the volume of alveolar defect, and the morbidity of the harvest area [12]. Typically, an autologous bone graft from the iliac crest (ICBG) is the conventional donor site [13]. However, others with less morbidity and lower bone resorption rate have been suggested, such as cranial bone, mandibular symphysis and tibia [14][15][16]. Nevertheless, autologous bone graft has several limitations, such as limited donor supply and/or self-renewal capacity, operative time, costs and donor site morbidity [17]. Furthermore, it is also reported that bone resorption can be approximately 40% after one year of bone graft, which may increase the need for reintervention [14].
Therefore, tissue regeneration presents as a new emerging and alternative approach to conventional bone grafts in cleft patients. Besides the bone regeneration capacity, these strategies can modulate inflammation and enhance the healing process [18]. Many substitute materials or agents alone or combined with autogenous bone have been suggested to regenerate bone, such as growth factors like bone morphogenic protein 2 (BMP-2) platelet-rich fibrin, bone scaffolds with or without cell treatment (e.g., mesenchymal stem cells (MSCs) or osteoblast), biocomposites (e.g., calcium phosphate and hydroxyapatite) and haemostatic agents (e.g., fibrin glue) [12][19][20][21][22][23][24][25].  It must be pointed out that evidence regarding some of these therapeutic methods is often weak due to the lack of standardization across studies. To clarify this, we conducted an umbrella review to assess the clinical effectiveness of regenerative strategies on the treatment of secondary bone graft in cleft patients, which would be advantageous for readership since it synthesizes what we know in a single paper. Therefore, this umbrella review aims to answer the following focused question: “Is the regenerative capacity of new bone graft strategies more effective than the gold-standard?”

The flow chart for this umbrella review can be seen in Figure 1. The search in the different databases resulted in 1317 articles, with no paper retrieved from grey literature or from the manual search. After the articles were screened by title and abstract, 20 full-text articles were assessed for eligibility. Full-text screening led to the exclusion of 11 articles due to several reasons: one case-report, two literature reviews, four with different interventions or outcomes, four with other measures of bone regeneration and one poster abstract. Nine systematic reviews were included in the qualitative analysis and five in the quantitative analysis (meta-analysis). 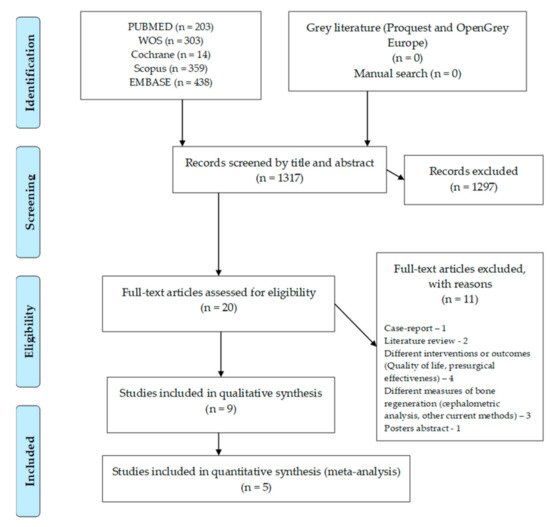 3. Synthesis of the Best Evidence 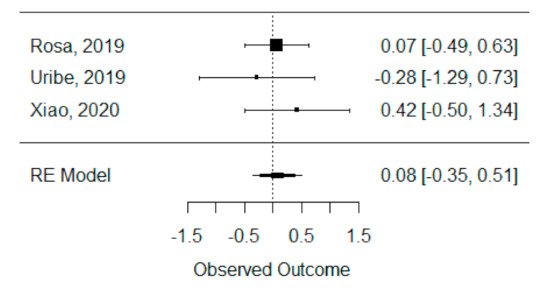 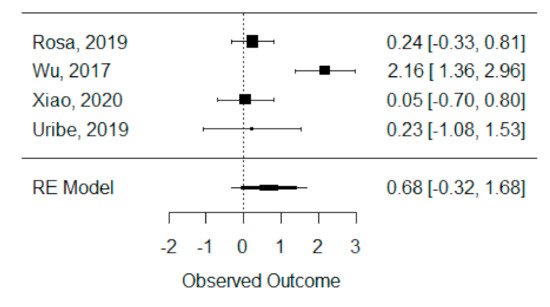 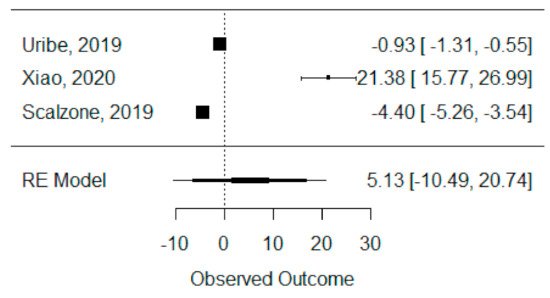 4. Quality of the Evidence

The effect size reported by the studies used in the previous meta-analysis did not depend on the precision of the studies (Egger regression b = 0.04; p = 0.931), and was not correlated to the studies variance (Begg–Mazumdar: tKendal = 0.333; p = 0.999) indicating lack of publication bias concerning the influence of sample size and variability on the mean difference between treatments.

The effect size reported by the studies used in the previous meta-analysis did not depend on the precision of the studies (Egger regression b = −4.17; p = 0.485), and was not related to the variance of the effects reported (Begg–Mazumdar test: tKendal = 0.333; p = 0.999), indicating lack of publication bias.

This umbrella review aimed to synthesize the current literature regarding bone strategies in cleft patients, evaluating their success or failure based on systematic reviews with/without meta-analyses.
Conventionally, an autologous bone graft using cancellous bone is considered the gold-standard technique for bone graft [10]. All included studies that had a comparator group used autologous bone graft as a control. The effectiveness of tissue regeneration approaches was also investigated, with human bone morphogenetic protein being the most reported in 6 of the 9 systematic reviews included. BMP-2 is usually delivered in an alloplastic bone graft or scaffold and is an effective inducer of bone and cartilage formation, belonging to the transforming growth factor-beta proteins superfamily. This protocol avoids the limitations of autologous bone grafts, such as limited donor supply and donor site morbidity, and reduces the patient’s surgical stress, which may be related to the lower operative time and hospital stay length, reported by some studies [31][32]. However, some adverse effects such as nasal stenosis and localized graft-site oedema still persist [26][30][33].
Although some of the systematic reviews included indicated that BMP-2 treatment may benefit bone formation compared to autogenous bone graft, this umbrella review reported no significant difference between these two protocols regarding volume, filling, and bone height [30][28]. However, these findings should be interpreted with caution because clinical and methodological heterogeneity can influence the magnitude of the statistical heterogeneity reported. This umbrella review identified different heterogeneity factors, namely, the number of participants, type of cleft, the timing of outcome, and intervention design. Thus, the results of the included studies can be affected by this heterogeneity, and, consequently, the results of this umbrella review can also be affected. Additionally, some SR results could not be used for the meta-analysis due to different synthesis measures, decreasing the number of included studies, which can affect the obtained result. Nevertheless, the quality assessment revealed that only one study included has a high risk of bias, which gives more confidence in the results of this umbrella review. Therefore, both methods can be an option in cleft bone graft treatment.
The timing for the bone graft is a variable that clinicians should consider because it can influence the bone graft prognosis, endangering the support provided for teeth eruption, the continuity of dental arch and the closure of the oronasal fistula [33]. Despite the difference in the selected studies’ age groups, the majority performed the bone graft after 8 years of age, which is by the ideal timing reported in the literature [34][35][36]. Furthermore, a recent study by Brudnicki et al. reported that bone grafts performed before 8 years old might have a limited negative effect on craniofacial morphology [33]. Regarding the postoperative newly formed bone evaluation, most included studies used computed tomography. The orofacial cleft patients require a 3D analysis for the correct diagnosis since they present with several medical conditions, namely bone graft interventions, impacted teeth or supernumerary teeth. This is the reason why CBCT is indicated in orofacial cleft patients by the European Academy of Dental and Maxillofacial Radiology [37]. Therefore, further studies should use CBCT as an assessment tool to measure newly formed bone.
Follow-up times are not consensual, even though most of the trials included in the systematic review reported a follow-up of six months. This period is ideal for carrying out radiograph control since the remodeling process with cortical maturation occurs after six months, remaining stable until the 24th month. Regarding the included studies, only Scalzone et al. considered trials with at least six months of follow-up [30]. The remaining systematic reviews’ findings should be carefully analyzed since the remodeling process may not be completed.
The findings of this umbrella review could be affected by the methodological and clinical heterogeneity among the included studies. Most of the included studies failed to discuss the heterogeneity and the risk of bias, especially in justifying the inclusion of studies with different methodologies and the consequent bias. Therefore, their conclusions must be interpreted with caution. Several SRs included in this umbrella review presented some gaps in the search description and inclusion criteria definition, which potentially increase the risk of publication and reduce the comprehensive nature of the review. Thus, the registration of the protocol is recommended and will enhance the robustness in further research. The methodological heterogeneity includes differences in the trial settings, missing a priori adequate sample size calculation, type of sample included (e.g., type of cleft, age groups), intervention protocols, bone measurement tools and follow-up times.
Future research should carry out blinded RCTs to control possible sources of bias such as randomization procedure, measurement tools and follow-up times. Moreover, the cost–benefit analysis of these new regenerative strategies in the bone graft is recommended since it plays a crucial role in healthcare systems’ decision-making.

This umbrella review suggests that BMP-2 and autogenous bone graft are both valid options since no differences were observed regarding volume, filling, and bone height in oral cleft patients’ surgery.
However, the findings should be analyzed cautiously due to several research gaps concerning the original studies’ methodological quality.