Subjects: Others
View times: 6
Submitted by:

When iBTA was initially developed ~20 years ago, tubular tissues were formed on the surface of the implants from a simple encapsulation reaction by embedding plastic cylinders as a foreign substance. For many years, we have been investigating whether the obtained tissues can be used as a substitute blood vessel. The tissues obtained were generally extremely thin and uneven in thickness, but they withstood arterial pressure sufficiently as vascular tissues with a small diameter of about several mm.

Additionally, special attributes will be required depending on the application purpose and the implant site. Artificial vessels for dialysis access are mainly used for the preparation of subcutaneously fixed superficial arteries and arteriovenous shunts to initiate dialysis. However, because its blood flow does not exist in a normal living body, it may require special functions other than those required for normal blood vessels in the living body. It is imperative that dialysis access prostheses withstand repeated punctures for dialysis.

Biotube is a general term for tubular tissues for autologous implantation that can be produced in the patient’s body. Its application is not limited to blood vessels and can potentially be applied to any tubular structures in the body such as lymphatic vessels, ureters, trachea [1][2][3], esophagus [4], and intestines. Animal experiments have confirmed their potential application as substitutes or repair materials for various defects in the cornea [5], diaphragm [6], urinary bladder [7], peritoneum [8][9], myocardium, valve membrane [10][11], dura mater, etc. The technique for preparing tissues for implantation in the body is called in-body tissue architecture technology (iBTA), but it is not a special technique.

When iBTA was initially developed ~20 years ago, tubular tissues were formed on the surface of the implants from a simple encapsulation reaction by embedding plastic cylinders as a foreign substance [12][13][14][15][16][17]. The tissues obtained were generally extremely thin and uneven in thickness, but they withstood arterial pressure sufficiently as vascular tissues with a small diameter of about several mm. Collagen was exposed on the luminal surface of Biotubes but, fortunately, that they had high patency without thrombus formation for an extended time [18][19]. Moreover, it was confirmed that such sufficiently strong tubular tissue can be formed even in the human body [20].

Recently, Biotube-like tubular connective tissues have been developed that thicken and harden the tissue walls by overexpressing the encapsulation reaction. Until ~10 years ago, we were also developing ways to make embedded types functional: (1) biochemical stimulation methods such as drug application or release [21][22][23], (2) light stimulation methods by incorporating LED irradiators in molds [24], or (3) a mechanical stimulation method by dynamic diameter expansion using repeated balloon dilation, or by minute inner diameter fluctuation using vibrating elements [25]. All of these stimulation methods were able to exert a special effect for promoting tissue formation under certain conditions. However, it is very difficult to stabilize their optimum conditions because they were highly dependent on the individual or physical condition of the animals, and they were often accompanied by inhibition of tissue formation due to excessive inflammation.

Instead of the previous method for preparing tissues on the outer surface of a conventional foreign substance, it was a completely new idea of preparing tissues inside the mold with a gap inside. By adjusting the size or gap of the space in the mold, it has become possible to freely prepare tubular tissues as Biotubes with a desired diameter and thickness [10][26]. The previous tissue formation was body-dependent, but it has become possible to control the shape and dimensions of the tissues using designed molds. Biotube Co., Ltd., [27] which the authors founded, is intended for social implementation of Biotubes using molds.

In this study, we describe the development of Biotube Maker for preparing Biotube with a diameter <4 mm, which is designated as a medical device in the SAKIGAKE program [28] of the Ministry of Health, Labour and Welfare in 2019, for bypassing the lower limb artery in patients with chronic limb-threatening ischemia. We will provide the latest information regarding Biotubes in 2020, including the progress of preclinical tests currently underway with the support of the Hashiwatashi project in Japan Agency for Medical Research and Development (AMED).

2. Development Process of the Molds for Biotube Preparation (Biotube Makers)

Since its conception, the first developed mold as Biotube Maker has been a straight columnar type (original mold inFigure 1a), which is assembled by covering the outside of a plastic core rod with a stainless steel pipe with a predetermined gap space [29][30]. The pipe contains many thin slits. When the mold is implanted subcutaneously, skin fibroblasts migrate into the mold through slits. The cells produce collagen fibers and, in over a month, the space in the mold is completely occupied with collagen-based tissue.

Similarly, if the rod material is made larger, a large-diameter Biotube can be easily obtained. Currently, large and thick Biotubes can be produced up to approximately 3 cm in diameter and 2 mm in thickness. In addition, it can be stored in alcohol for a year even at room temperature. Almost all previous implantation experiments in animals were performed using Biotubes preserved in alcohol.

Biotubes obtained from the straight mold have already been clinically applied to three dialysis patients as a First-in-Man (FIM) study [30]. Three patients had repeated venous stenosis for over a year and underwent painful balloon dilation. Therefore, at Tenri Hospital, the patients underwent bypass surgery using Biotubes. One patient maintained patency for more than 2 years and did not require postoperative balloon dilatation.

The 50-cm-long Biotube was introduced as the longest tissue engineering artificial blood vessel worldwide at the time of development [31]. Since tissue formation occurs on the inner and outer surfaces of the mold, the Biotube structure formed inside the Maker and the capsule structure formed on the outer periphery of the Maker are strongly connected at a large pore. Occasionally many surrounding tissues were attached to the harvested mold. Removing excess adherent tissues from the Maker surface was cumbersome.

The mold was improved to reduce the pore area as much as possible while maintaining the opening ratio. However, the strength of the tissues connecting the inner and outer surfaces of the mold at the pore was quite strong, and it is still difficult to peel off the outer peripheral structure even in a small pore. In contrast, due to the technical problem of plastic processing, there is a limit to the precise processing of minute pores with high density. Moreover, since the plastic material has low strength, the thickness of the plastic plate has to be increased to prevent structural deformation. 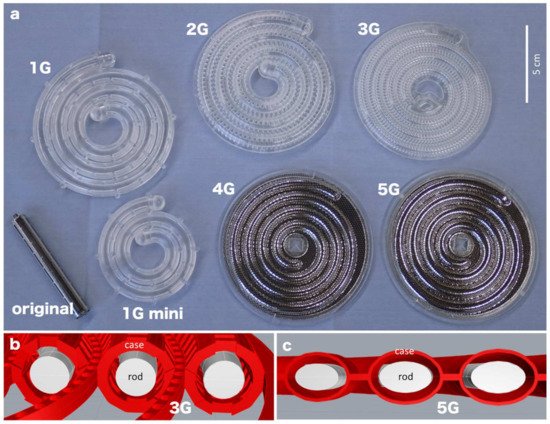 Figure 1. (a) Photo of a series of molds, Biotube Makers, for Biotube preparation with stainless steel pipe (original), plastic spiral case (1G to 3G) and stainless steel cover plates (4G and 5G) with a core rod inside all the molds as a scaffold for Biotube formation. The original and 1G molds have straight slit pores for tissue migration into the molds. The 2G and 3G molds have square pores. 4G and 5G molds have round pores. Illustration of the cross-section of 3G with a round-shaped rod (b) and 5G with an ellipse-shaped rod (c). The red parts are cover plates and the white ones are core rods.

In contrast, we are also developing a Maker for medium-diameter Biotubes with an inner diameter of 5 mm for access in dialysis (5G MD in Figure 2a). The basic structure was the same as the Maker for the lower limbs. By implanting under the skin for 1 month, Biotubes for dialysis were formed on the surface of the core rod inside the Maker (Figure 2b). The length of the resulting Biotube was about 10 cm shorter than that for the lower limbs. 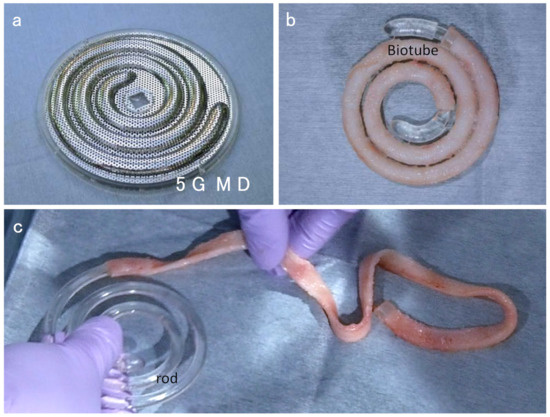 Figure 2. (a) Photo of stainless steel spiral Biotube Maker for the preparation of Biotube with minimum diameter (5 mm) for use in blood access in dialysis (5G MD). (b) Biotube formed around the core rod in the 5G MD Maker. (c) Biotube removing from the core rod.

Chronic limb-threatening ischemia (CLTI) is the final stage of peripheral arterial disease. It is a disease associated with a high morbidity rate, leading to serious mortality and loss of limbs and resulting in poor quality of life. In contrast, the patency rate in endovascular interventions is inadequate. High quality of autologous venous conduits is effective in bypass surgeries.

These Biotubes provide a substitute blood vessel with a diameter of <4 mm for revascularization by lower limb artery bypass. Using the stainless steel 5G Maker, which was successfully developed in mid-2020, preclinical clinical tests have begun. In vivo performance tests are conducted using goats at Oita University and Tohoku University. (NIH Publication No. 85-23, received 1996).

As one of the in vivo performance tests, we investigated whether the 5G Makers could form Biotubes with the designed dimension. One month after the Makers were embedded, they could be removed from the same incision position as they were embedded (Figure 3e). In contrast, the previous Biotubes obtained from 3G Makers had large protrusions on their outer surface. However, the inner surface of all Biotubes was very smooth regardless of the type of Maker used (Figure 3h).

The Biotubes obtained using the 5G spiral Maker were straightened by immediate immersion in a 70% alcohol solution. When water was poured into the lumen of the Biotubes, no leakage, tears or defects were observed (Figure 4a). The tensile strength of the samples obtained by cutting the Biotubes into a ring shape (width 5 mm) was ca. Therefore, the converted pressure resistance was extremely high to be ca. 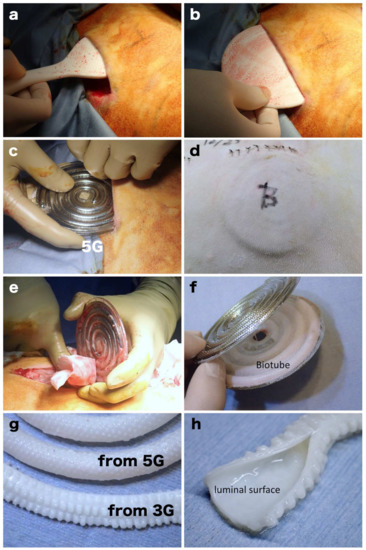 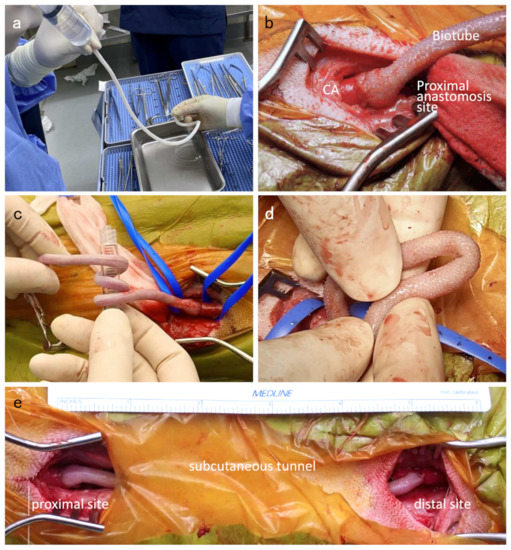 The carotid arteries of goats were dissected and after intravenous injection of heparin sodium The resistance to needle sticks was slightly higher than that of native blood vessels. Since the shape of Biotubes was stable and their lumen was maintained as compared with native blood vessel, there was almost no stress in suturing. After implantation, animals received antiplatelet drug (clopidogrel 75 mg/head, PO, SID) for one month.

In a preliminary acute phase study using Biotubes from 3G Makers [32], complete patency was successful in all six cases with an implantation period of 1 month. Histological observation revealed the progression of vascular tissue remodeling, including the formation of an endothelial cell layer on the lumen surface. The implantation test in the chronic phase is ongoing using Biotubes from 5G Makers and, at present, the observation period of up to 4 months has elapsed, and there is no abnormal vascular deformation such as stenosis or dilation with maintained patency. Since the structure of Biotube is expected to approach that of native blood vessels with the implantation period, it is expected that favorable chronic phase results will be obtained.

Human acellular vessels from Humacyte Co., (Durham, NC, USA) are probably the most advanced in the field of regenerative blood vessels [33][34]. Tubular tissue is prepared by culturing human vascular smooth muscle cells collected from corpses on biodegradable scaffolds and decellularized to finally obtain a collagen-containing tube containing without artificial substance. It takes more than half a year to manufacture it, but once it is manufactured, it can be used as off-the-shelf products for emergency use. Additionally, the other is pilot study in above-knee femoral popliteal bypass implantation.

In addition to the in vivo tests introduced in this paper, physical and chemical tests and biological safety tests are also conducted in parallel as preclinical tests for the stainless steel Makers (5G) used for making Biotubes for bypass grafts in CLTI. We aim for regulatory approval of Biotube in 2025; therefore, further accelerated development is progressing. The practical application of Biotubes for lower limb artery bypass, which has been designated as a pioneer application, is a top priority. Furthermore, application to other fields including dialysis will be conducted in parallel as far as possible.