Genetic diversity favors population conservation and individual survival. At population level, loss of genetic variation compromises evolutionary response to environmental change [1][2][3]. At the individual level, inbreeding reduces fitness [4][5]. Loss of population genetic diversity and inbreeding depression have received great attention in wildlife conservation and captive breeding programs [6][7][8][9][10]. However, genetic diversity of wildlife may be in growing concern in contexts related to disease transmission and human health.
Most human infectious diseases originate from animals [11][12][13][14]. Scientists have pointed out the significant threat of infectious diseases to global health, global economy, and global security [15][16][17]. Since 2020, humanity is becoming aware of the global effects of infectious diseases [18][19][20] and studies propose that the frequency of this threat is on the rise [12][21]. Efforts to minimize the emerging of infectious diseases are expected to increase. Research focusing on different aspects of disease emergence and transmission will support these efforts.
A positive relationship between host genetic diversity of genetic markers and pathogen resistance (heterozygosity–fitness correlation) has been detected in different species [22][23][24][25][26][27][28][29][30][31][32]. Three hypotheses might explain this relationship [33]: the direct effect hypothesis, posing a direct link of the assessed genetic markers with parasite resistance, the local effect hypothesis, asserting that the assessed genetic markers are in linkage disequilibrium with fitness-linked loci, and the general effect hypothesis, claiming that genome-wide diverse individuals are relatively more resistant to diseases. Recent studies have shown that pathogen resistance is mainly achieved thanks to diversity of genes related to the immune system rather than genome-wide diversity [34][35], these results provide support to direct effect or local effect hypotheses.
Studies on the relationship between diversity of immune genes and pathogen resistance have focused on the major histocompatibility complex (MHC). MHC genes drive the adaptive immune response, and their diversity promotes the number of pathogens recognized [35][36]. Diversity at MHC genes is maintained by balancing selection [37][38][39], and three mechanisms have been proposed to explain the advantage of MHC variability: overdominance or heterozygote advantage, rare allele advantage, and fluctuating selection [40].
Despite the fact that MHC genes have been the focus of considerable research [41][42], they only represent a fraction of the immune system. Other candidate genes have been shown to induce the relationship between genetic diversity and pathogen resistance or tolerance in hosts. For instance, Turner et al. [43] found that genetic diversity of cytokines is associated with variation in resistance to multiple pathogens, in a population of field voles (Microtus agrestis). Amino acid variation in the prion protein gene has been related to the probability of infection with chronic wasting disease and its progression following infection [44][45]. Quéméré et al. [22] have recently shown that diversity in Toll-like receptor genes in Alpine ibex (Capra ibex) affect Brucella infection status.
Due to its relationship with pathogen resistance, host genetic diversity reduces pathogen prevalence, rate of pathogen adaptation to host, and pathogen virulence [46][47][48][49][50][51]. Therefore, host genetic diversity tends to limit disease spread in nature and buffers populations against epidemics [52][53][54][55]. Accordingly, genetic diversity of host populations deserves an increasing interest in contexts related to disease transmission and human health.
Patterns of genetic diversity have been broadly studied in population conservation contexts [6][8][56][57][58][59]. In addition to describing the patterns, these studies tend to investigate the factors and processes potentially affecting genetic diversity. Gene flow and genetic drift have been proposed as major processes affecting population genetic diversity [60][61][62][63][64]. On the other hand, past demographic history can also have a deep impact on the relationship between genetic diversity and fitness [65][66]. A sudden bottleneck can reduce genetic diversity and increase inbreeding and, hence, it tends to enhance the susceptibility to infectious diseases [67][68]. Contrarily, slow, long-term declines favor the action of natural selection that can purge deleterious alleles and favor population viability [69][70][71]. Therefore, a reduction in genetic diversity might have different outcomes over fitness of individuals and population viability. Nonetheless, the knowledge of the action of processes affecting genetic diversity can be important, not only for population conservation, but also to predict or manage the spread of infectious diseases. Wildlife management policies that reduce the risk of disease spread might also take into account all of the factors affecting gene flow, genetic drift, and hence, the genetic diversity of host populations.

Throughout generations, interactions with pathogens produce evolutionary changes in host populations [39][72]. In a host population, pathogen infections favor genotypes with higher resistance (ability to limit pathogen burden [73][74]) or tolerance (ability to limit disease severity induced by a given pathogen burden [73]). In addition to changes in resistance or tolerance, diseases can have other impacts on host populations: population reduction, changes of age structure, alteration on life-history parameters, or effects on genetic diversity [75]. However, the presence of pathogens can also cause changes to host behavior.

For instance, individuals can avoid infected mates to reduce pathogen transmission [76][77][78]. However, host–pathogen interactions have induced evolutionary processes that are responsible for the functioning of other mate choice-related behaviors. On the other hand, individuals (mainly females [79][80]) can choose genetically dissimilar mates to promote genetic diversity of descendants and, hence, their capacity to resist or tolerate pathogens [81][82][83]. However, the existence of infectious diseases might boost individuals to choose mates with the same level of infection, a behavior that tends to favor genetically similar mating and loss of population genetic diversity [84][85].

Studies have also investigated the effects of infectious diseases on dispersal behavior that, in turn, influence the genetic structure of populations [86][87]. Demographic declines that follow disease outbreaks increase resource availability and decrease dispersal advantages. Consequently, the low need for dispersal reduces gene flow and enhances genetic differentiation. However, the expected reduction in genetic diversity as a consequence of low dispersal might be counteracted by the effect of balancing selection acting on immune genes during the disease outbreak [88].

Pathogen– host coevolutionary dynamics may be characterized by fluctuating selection (FS), where host genotypes may be at any moment more resistant to contemporary, compared to past or future pathogens, or by arms races (AR), where both hosts and pathogens tend to increase resistance/infectivity over time [89]. The FS dynamic is based on specialized interactions and, hence, it is typical of spatially structured environments. Mixing locally adapted phenotypes may shift the coevolutionary interactions from FS to AR, due to exposure to a higher range of genotypes selected for a wider range of resistance/infectivity in both coevolutionary counterparts [90].

Among mammals, ungulates (a paraphyletic group that includes Artiodactyla and Perissodactyla orders) include a high proportion of wild species with zoonotic diseases. [93] found that 32% of wild ungulate species (73/247 species) were zoonotic hosts. The high rates of disease transmission from wild ungulates to human have been mainly driven by our contact with these species throughout human history [94][95][96]. In addition to promoting species conservation, the maintenance of high levels of genetic diversity in wild ungulates should reduce risks regarding the emergence of infectious diseases, these risks being some of the most important threats to human health and the global economy [97][98][99].

Genetic diversity of ungulates is being altered by human-mediated processes acting on gene flow or effective size of populations. Due to hunting, competition with livestock, and lost habitat, many ungulates occur in small or bottleneck populations [100][101]. Sex-biased harvesting changes population structures and reduces effective population sizes [102][103]. These processes tend to decrease ungulate genetic diversity and, hence, affect species conservation and the probability of infectious disease emergence and spread. 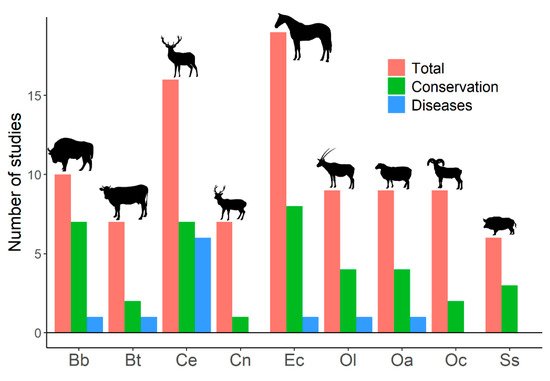 Wild boar and red deer are important game species in Spain, where most populations are in private hunting estates (typically 750–3000 ha). In these private estates, wild boar and red deer can coexist with other wild ungulates, such as fallow deer, or domestic ungulates, such as cattle [127][128]. These management actions alter ecology and behavior of individuals that, in turn, affect gene flow and effective population size. Consequently, some populations can present low levels of genetic diversity or high inbreeding, reference [104][108][129][130][131][132][133][134][135] which are associated with low antler development in red deer [121] and high predisposition to TB progression in both species [104][129][130].

A management action, presumably affecting genetic diversity, is the placement of high perimetral fences around the estates to maintain wild ungulates inside the owned land [136][137][138]. As a result of this practice, in some of the properties, we can find two types of hunting estates: open (without perimetral fences) and fenced (with perimetral fences). Additionally, small effective population sizes at the moment of fence placement might cause a founder effect with important consequences on genetic diversity and inbreeding. The lack of gene flow and founder effects might make wild boar and red deer in fenced estates present low levels of genetic diversity and might make potentially dangerous populations.

In open estates, managers promote the harvesting of the maximum number of males before they are hunted by neighbors. The low rate of migration rates of males among open estates might hinder the maintenance of genetic diversity and explain why open and fenced estates do not present different levels of genetic variation. Therefore, genetic diversity in open estates can be, to some extent, maintained by female dispersal. Nevertheless, a reduction in hunting harvesting over males can be recommended to equilibrate population structure and recover natural dispersal of males.

In addition to fences and population structure, landscape might also influence dispersal and gene flow in wild boar and red deer. For red deer, however, landscape features significantly affect movements [148]. In Spain, forest continuity has been shown to favor red deer movements and dispersal [134]. Therefore, to avoid loss of generic diversity in red deer populations, refuge (forest) continuity might be recommended to facilitate individual movements between open estates.