Microplastics in the Aquatic Environment

Microplastics, or microbeads, are plastic particles < 5 mm diameter, and they include nano-sized particles (1 nm). Their size has been miniaturized or fragmented enough that there might be a need for the use of microscopy techniques to study them. In many cases, microplastics continue to carry the chemical structure of their parent plastic with minimum alterations due to exposure to varied environments.

Global plastics production surged from 1.5 to 245 megaton in the period 1950 to 2008 with a small decrease to 230 megaton in 2009 [1][2]. Annual plastic production gives an indication of how much plastic waste ends up in the environment as microplastics. About 10–15% of all plastic manufactured each year end up as municipal solid waste, which is cause for concern [3]. For instance, plasticizers constitute 70% of the weight of plastics, while 3% are endocrine chemicals such as bisphenols and flame retardants

The bulk of plastic waste entering the marine environment originates from terrestrial sources. (1) street litter is mobilized into waterways by rain, and wind, (2) improper or illegal dumping of waste, (3) inappropriately covered waste containers and vehicles, (4) badly managed dump sites, About 80% of the production of plastics that wind up in marine environments originates from run-flow water from land waters to wastewater treatment plants (WWTPs) [4]. Numerous studies have shown that plastic debris constitutes a considerable proportion of waste around marine environments, while data on the extent of pollution in freshwater environments is gradually building up [5][6][7][8][9][10].

Microplastics, or microbeads, are plastic particles In many cases, microplastics continue to carry the chemical structure of their parent plastic with minimum alterations due to exposure to varied environments [11]. In general, chemical pollutants are known to bio-magnify up the food chain [12]. Generally, plastics adsorb and hyper-concentrate a wide range of chemicals called persistent bio-accumulative and toxic chemicals including pesticides, flame retardants, and industrial chemicals, and heavy metals like Ni, Cd, Cu, Cd, so that these chemicals can be up to a million times the levels in the surrounding water [13].

Microplastics have been detected in a number of environmental compartments around the world. The majority of clothing fibers are synthetic, and research from the shoreline around the globe showed textile fibers are dominant [14][15][16]. The hypothesis was that fibers are escaping from washing machines, a phenomenon most likely to occur in developed countries. In fact, in recent research, it has been found that microfibers from synthetic textiles are one of a major sources of microplastics in the environment, irrespective of the country of origin [17].

The risk posed by microplastics varies with shape and size so that with a larger surface area, fibers will be more toxic than spherical beads [18][19]. Water reservoirs such as lakes and dams are particularly susceptible to microplastic pollution, hence there is considerable data on microplastic pollution characteristics in these ecosystems. A study on microplastics pollution in the backwaters of Xiangxi River reported microplastics concentrations in the range 0.55 × 105–342 × 105items per square kilometer and 80–864 items per square meter in surface water and sediment, respectively [20]. These results indicate the presence of microplastics in reservoir impacted tributaries and suggest water level controlled hydrodynamic conditions and nonpoint sources as key determinants for the accumulation and distribution of microplastics [21].

While the effects of microplastics as anthropogenic litter on the aquatic ecosystem have been documented [4][22], including the modeling of all plastics ever produced [23], many researchers on microplastics note the dearth of research data both in the oceanic environment and in freshwater sources [24][25][26][27]. An increasing volume of reviews has appeared, ranging from exploring the whole spectrum of microplastics to discussing more specific laboratory methods of analysis and recommendations for quantification, the state of primary microplastics, and microbial degradation approaches [28]. Therefore, standardization and harmonization of the sampling and processing techniques is important for inter-study comparison of the data, monitoring pollution, and safeguarding the ecological integrity of aquatic ecosystems [29].

To abate the ecological impacts of microplastics, all stakeholders have to make concerted efforts. For instance, (1) governments can fund research that can lead to reduced risks of microplastics entering water bodies, (2) the general public can be encouraged to explore ways of managing plastic wastes through reuse, recycling and the recovery of resources locked away in these materials for sustainable community development, and (3) to minimize the plastics and microplastics load entering the aquatic environment, industry can adopt the cost-effective reduce-reuse-recycle (3Rs) circular economy [16][30][31][32]. Overall, these efforts will minimize the number of plastics that end up in the environment and impacting both aquatic and human health.

Once formed, microplastics are transported via wastewater runoff and enter into municipality effluents, freshwater or marine system [14][33][34][35]. By virtue of their size, these particles are not retained by the conventional water filtration systems, and find their way into water bodies, thus posing a potential threat to aquatic and human life. Secondary microplastics are produced from larger pieces of plastics breaking down into smaller fragments due to environmental stress, cracking, and degradation associated with weather conditions and biological and UV attacks [15][36]. The plastics are also broken down by the abrasive effect of waves against the coastal sand and rocks (Figure 1). 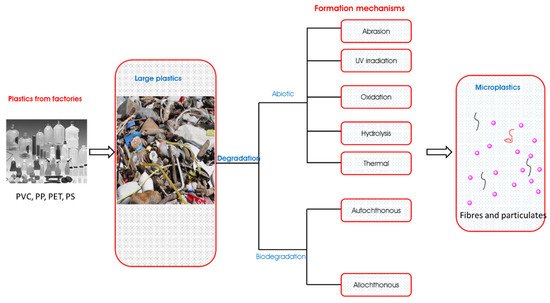 Figure 1. Mechanisms of degradation of plastics into microplastics.

Most commonly used plastics are non-biodegradable; consequently, they accumulate in the environment [23]. Biodegradation of plastics usually occurs in both the aquatic and terrestrial environments. In shallow waters; however, there are a variety of microbial communities that are crucial in the biodegradation process [37]. Generally, the degradation of plastics through biotic means is a complex process and requires a combination of various types of microorganisms for complete degradation into microplastics.

Despite several studies on microplastics, their fate in the environment is poorly understood. Due to the hydrophobic nature of microplastic surfaces, they can significantly adsorb toxic organic contaminants and are considered as vectors for most persistent organic pollutants (POPs) listed under the Stockholm Convention [35]. For instance, studies reported potentially pathogenic Vibrio parahaemolyticus on microplastics from North/Baltic Sea [38]. Thus, future studies should not only put emphasis on toxic chemical transportation of microplastics to living organisms, but also on the pathogens they potentially transport.

The smaller size of microplastics coupled with their low density makes them to suspend in the air and easily be inhaled and create potential health problems [39]. Among the various microplastics, fibers are an abundant significant source of microplastics in the marine and atmospheric environment, and when ingested, could release different types of pollutants in living organisms [34][40]. However, a thermodynamic method for evaluating the environmental exposure of chemicals adsorbed to microplastics showed a low significance of microplastics as a vector for persistent, bioaccumulative and toxins, relative to other exposure pathways [41]. Nonetheless, as pointed out by the researchers, this study was limited by lack of data on kinetics, chemical interactions (desorption and adsorption), the influence of microbial biofouling, assessment of the fate of the microplastics in a microorganism to improve understanding.

The position of microplastics in aquatic systems is influenced by various dynamics including fouling and their density, and determines their impacts on marine organisms. After fragmentation, lower density microplastics float on the water surface, while higher density ones sink to accumulate in the sediment [43][44]. Thereafter, there is an interchanging of the microplastics between biota, water, and sediment through bioturbation, ingestion, and excretion (Figure 2). A recent modelling study on the transportation of microplastics confirmed that river hydrodynamics greatly influence microplastics distribution in rivers and their introduction into marine systems [45]. 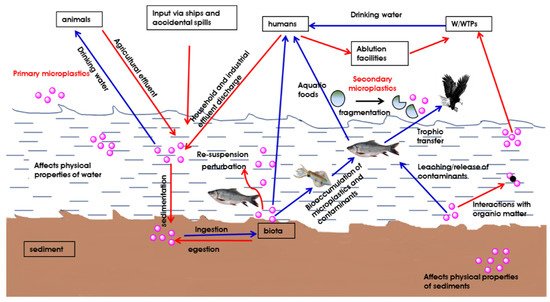 Figure 3. An illustration of the occurrence and fate of microplastics in aquatic systems.

Several studies have highlighted the presence of microplastics in aquatic biota, but the impact of ingestion by various organisms is not adequately researched. Once ingested, they transfer toxic chemicals which are either adsorbed onto the microplastics during emission and transportation or additive toxic chemicals added during the manufacturing process [46]. Large amounts of microplastics are expected in the aquatic biota; however, there is no experimental evidence that clearly shows whether microplastics transfer greater concentrations of pollutants to tissues than sediments or whether microplastics are capable of transferring high concentrations of pollutants to impair functions of organisms [47]. Furthermore, taking into consideration the high amount of global seafood consumption, for example over 125 × 106tons in 2009 [22], the contamination of human food by microplastics should get more research attention.

Although microplastics have been reported in freshwater [48][56][57], data on the presence and distribution of microplastics in the freshwater environments is sparsely available. Consequently, there is still a lack of detailed studies on the relative load in the two environmental compartments [58]. Considering that humans are highly dependent on freshwater sources for drinking and other uses, limited knowledge on the transfer of microplastics from freshwater to terrestrial environments and their potential impact on human health is cause for concern. In order to develop suitable policy and management instruments to mitigate the impact of microplastics on freshwaters, there is a need to fund research, and promote education and awareness to the wider population, especially in developing countries.

4. Interaction of Microplastics with Pollutants

Microplastics can scavenge most organic pollutants and toxic metals in the environment. Consequently, they are carriers of toxic substances like pesticides, polychlorinated biphenyls, and polycyclic aromatic hydrocarbons [3]. Furthermore, the study investigated on the influence of microplastics on toxic metals adsorption in stormwater demonstrated that microplastics are vector for toxic metal transportation from urban environment to the water resources [69]. The ease of scavenging of toxic chemicals by microplastics is largely owing to their small size and hydrophobic nature [70][35].

In addition, microplastics may also contain toxic chemicals which are embedded during manufacture for the purpose of protecting plastic from fire risk (e.g., polybrominated diphenyl ethers, phthalates, nonylphenols, bisphenol A, polybromobiphenyls, polychlorobiphenyls), antioxidants to protect microbial growth (e.g., triclosan), and UV stabilizers to inhibit degradation on exposure to sunlight [47][71][72][73]. When the additives are not chemically bonded to the polymer molecules, they can be easily released from the plastics and subsequently transferred to water, sediment, and living organisms [3][58][74]. Ingestion of microplastics by marine microorganisms, animals and humans may result in physical and toxicological effects [1][65]. The physico-chemical characteristics of microplastics such as size, density, and chemical composition are key attributes for their bioavailability to the organisms [44][75].