Tilapia Lake Virus Disease (TiLVD) is a new disease caused by Tilapia tilapinevirus, or tilapia lake virus (TiLV), which is a linear, negative-sense single-strand RNA virus containing ten segments; it has a total genome size of 10,323 kb [1][2]. Since 2014, TiLV has been reported on four continents, North America, South America, Asia, and Africa [2][3][4]. All stages of tilapia, from fry to adult and broodstock, are susceptible to TiLV, with mortality ranging from 5% to 100% [2][4][5][6][7][8][9]. TiLVD has been most extensively reported and studied in several species of tilapia, including Nile tilapia (Oreochromis niloticus) [5][8][10][11][12][13][14], hybrid tilapia (Oreochromis niloticus × O. aureus) [4], gray tilapia (O. niloticus × O. aureus) [15], and red hybrid tilapia (Oreochromis sp.) [8][16]. Some other species of fish are also susceptible to TiLV, including giant gourami (Osphronemus goramy), which showed a high mortality rate during laboratory challenge [17]; the virus was also detected in wild river barb (Barbonymus schwanenfeldi) in Malaysia [18]. TiLV primarily affects tilapia and its hybrid species, while most other freshwater fish are resilient to TiLV infection, including snakeskin gourami (Trichogaster pectoralis), iridescent shark (Pangasianodon hypophtthalmus), walking catfish (Clarias macrocephalus), striped snake-head fish (Channa striata), climbing perch (Anabas testudineus), common carp (Cyprinus carpio), silver barb (Barbodes gonionotus), Asian sea bass (Lates calcarifer) [17], and Indian major carp (Labeo rohita) [19].
Tilapias of the genus Oreochromis are a popular species for aquaculture in several regions of the world; three of the most common species are Nile tilapia (Oreochromis niloticus), blue tilapia (Oreochromis aureus), and Mozambique tilapia (Oreochromis mossambicus) [20][21][22][23][24]. Mozambique tilapia is known to grow more slowly, mature at a young age, and be more tolerant to wide salinity fluctuations than Nile tilapia [21][22][23][24][25]. Therefore, Mozambique tilapia has been used in breeding to improve the saltwater and cold tolerance of other tilapias [21][26][27]. The species has also been used as a model to study environmental factors [28][29] and response to pathogens [30]. Mozambique tilapia is native to the river of South Africa [31], but its numbers have decreased due to introduction of invasive fish species, including Nile tilapia. This invasion has resulted in the extirpation of Mozambique tilapia due to habitat competition and hybridization [32][33][34][35][36][37]. The Mozambique tilapia is now therefore considered a globally vulnerable species and is on the International Union for Conservation in Nature (IUCN) Red List [38]. In addition to habitat competition, pathogen carrying and spill over between native and invasive fish species will result in decreasing numbers of the native species. The susceptibility of Mozambique tilapia to pathogens that lead to massive decreases in number is therefore essential to investigate.
Although there is no direct experimental study on the susceptibility of Mozambique tilapia to TiLV, one previous study suggested that TiLV can replicate and infect their cells [39]. Furthermore, the natural infection of red hybrid tilapia with a Mozambique tilapia genetic background with TiLV (O. niloticus × O. mossambicus) has previously been reported [40]. Given the genetic similarities between Nile tilapia and Mozambique tilapia, there is a significant possibility that TiLV may cause infection in this species.

At 28 dpc, the cumulative mortality in Mozambique tilapia with low (1 × 103 TCID50/mL) and high (1 × 105 TCID50/mL) concentration of TiLV was 48.89% and 77.78%, respectively (Figure 1). At 4 dpc, moribund Mozambique tilapia developed clinical signs of TiLV infection, including skin hemorrhage, lethargy, pale skin, abdominal swelling, skin erosion, congestion around the eye, and exophthalmos (Figure 2). Notably, mortality in fish exposed to high TiLV concentration began at 4 dpc, while the mortality in fish exposed to low TiLV concentration did not start until 7 dpc. Mortality in both low TiLV and high TiLV-exposed fish ended at 19 dpc (Figure 1). Intraperitoneal challenges (IP) of red hybrid tilapia with TiLV at 1 × 105 TCID50/mL were conducted to compare clinical signs, pathology, and mortality patterns. Similar to the Mozambique tilapia, the red hybrid tilapia also showed skin hemorrhage, swimming at the bottom of the tank, skin and fin erosion, exophthalmos, and scale protrusion, with the first mortality at 6 dpc. At the end of the experiment, the cumulative mortality of the red hybrid tilapia was 66.67% (Figure 1). No clinical signs and mortality developed in the control Mozambique and red hybrid tilapia. 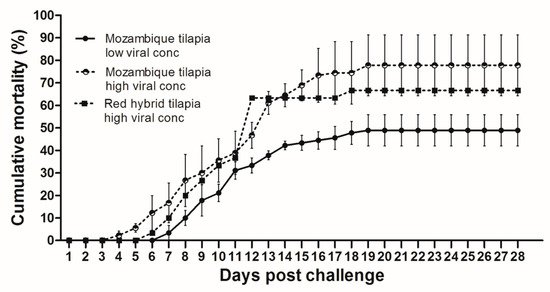 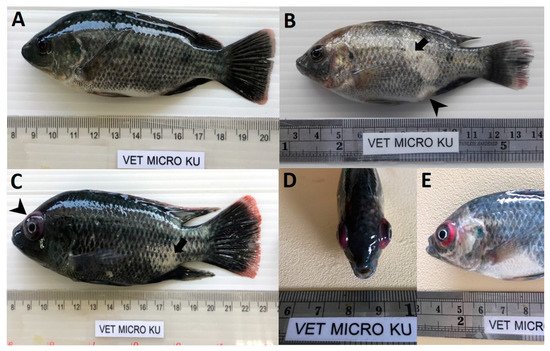 4. Histopathological Finding and In Situ Hybridization in the Challenge Fish

Normal hepatocytes with adequate glycogen storage were found in the liver of control fish (Figure 3A,C). No extensive histopathological changes were found in the livers and spleens of Mozambique tilapia that were challenged by the low concentration of TiLV (Figure 3C,D). However, severe histopathological changes could be found in red hybrid tilapia and Mozambique tilapia exposed to high concentration of TiLV at 6 dpc. Depletion of glycogen storage, loss of sinusoid structure, presence of syncytial giant cells containing multiple nuclei, and intracytoplasmic inclusion bodies were observed in the livers of both species (Figure 3A,E). A few melanomacrophage centers (MMCs) and normal lymphocytes surrounded by a sheath of reticular cells were observed in the spleen of the control red hybrid and Mozambique tilapia (Figure 3B,D), while an abundance of MMCs and depletion of red blood cells were observed in the spleens of the fish exposed to the high TiLV concentration (Figure 3B,F). No remarkable change was observed in the gills or intestines of the challenged fish. The localization of TiLV RNA in infected tissues including liver, intestines, heart, and gills was further confirmed by ISH. Intriguingly, positive signals with green coloration were clearly observed in all tested Mozambique tilapia tissues exposed to the high TiLV concentration, while positive signals were noted to a lesser extent in liver and intestines of Mozambique tilapia exposed to the low TiLV concentration. Conversely, no positive hybridization signal was detected in either the infected tissues exposed to a non-irrelevant probe or the uninfected control tissue samples (Figure 4). 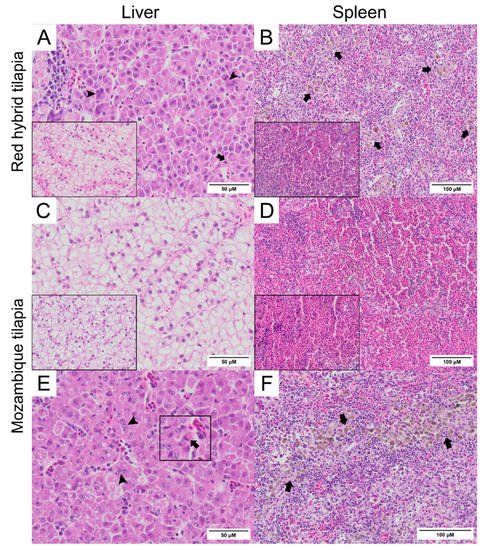 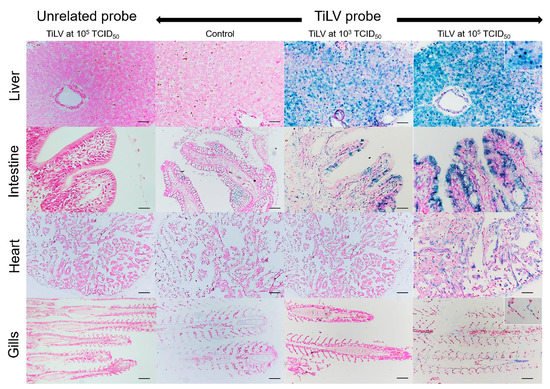