Atherosclerotic cardiovascular diseases (ASCVD) are the major cause of mortality worldwide. Despite the continuous progress in ASCVD therapy, the residual risk persists beyond the management of traditional risk factors. Several infections including Helicobacter pylori infection, periodontal disease, and viral infections are associated with the increased risk of ASCVD, both directly by damage to the heart muscle and vasculature, and indirectly by triggering a systemic proinflammatory state. Hence, beyond the optimal management of the traditional ASCVD risk factors, infections should be considered as an important non-classical risk factor to enable early diagnosis and appropriate treatment.

Cardiovascular diseases (CVD) are the leading cause of mortality worldwide, accounting for an estimated 17.9 million cases of death per year [1]. Among them, the largest group is atherosclerotic CVD (ASCVD). Despite the continuous progress in ASCVD therapy, the residual risk persists beyond the management of traditional risk factors. Hence, there is still a need for a better comprehension of pathophysiological processes underlying ASCVD [2][3]. In addition to traditional risk factors such as smoking, visceral adiposity, diabetes, hypertension, and dyslipidemia, chronic inflammation is one of the well-established non-classical risk factors of atherosclerosis [4][5]. Prolonged exposure to oxidative stress leads to the activation of multiple cell types involved in inflammation, including leukocytes, platelets, endothelial cells, and smooth muscle cells. Cellular mediators released from these cells induce and sustain the chronic inflammation of the vessel wall, which is a crucial pathophysiological mechanism of atherosclerosis [6]. Vessel wall inflammation is also due to impaired production or activity of nitric oxide (NO), which leads to endothelial dysfunction at an early stage of atherosclerosis. Impaired NO release along with increased NO degradation leads to an imbalance between vasoconstriction and vasodilation and initiates numerous mechanisms that promote and exacerbate atherosclerosis [7].
Since infections are inevitably associated with activation of immune response and inflammatory processes, the relation between ASCVD and infections has been extensively studied. There is evidence that particular infections are a risk factor for the development and/or aggravation of ASCVD. In particular, the association of ASCVD with periodontal disease, Helicobacter pylori (H. pylori), Cytomegalovirus (CMV), pneumonia, Human immunodeficiency virus (HIV), Herpes simplex virus (HSV), and most recently severe acute respiratory syndrome coronavirus-2 (SARS-CoV-2) infection has been described [8][9][10][11][12][13][14]. However, the pathomechanism of these associations is not entirely clear and hitherto research has provided controversial results. Considering that ASCVD are the major cause of death in high-income countries, whereas infections (a potentially modifiable risk factor) are the major cause of death in middle- and low-income countries [15], it is crucial to determine both the pathophysiological associations and the possible advantages of infection treatment in the course of ASCVD. This may have a major effect not only on global human health but also on the healthcare costs related to infections and ASCVD. Here, we summarized the currently available evidence on the role of infections in ASCVD development, considering (i) the role of inflammation in ASCVD, (ii) the impact of particular infections and pathogens (Helicobacter pylori, periodontal disease, pneumonia, CMV, HCV, HIV, HSV, and most recently SARS-CoV-2) on the development and progression of ASCVD and (iii) possible therapeutic implications, focusing on the anti-inflammatory and anti-infective efficacy of statins, P2Y12 inhibitors, angiotensin-converting enzyme inhibitors (ACE-I) and angiotensin receptor blockers (ARBs), colchicine, anti-cytokine drugs, and methotrexate.

2. The Role of Inflammation in Cardiovascular Diseases

Atherosclerosis is an inflammatory disease that underlies ASCVD and related complications, including acute coronary syndrome, ischemic stroke, and peripheral artery disease [6]. Cells involved in the development of atherosclerosis include macrophages/foam cells, endothelial cells, smooth muscle cells (SMC), T-lymphocytes, and platelets. In addition, extracellular vesicles (EVs) and microRNAs (miRNAs) released from these cells induce and sustain atherosclerotic processes in the vessel wall. The pathophysiology of atherosclerotic plaque formation is shown in Figure 1. 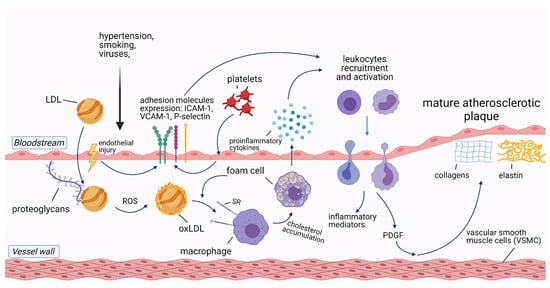 Figure 1. Pathophysiology of atherosclerotic plaque formation. Abbreviations: ICAM-1—intercellular adhesion molecule-1; LDL—low-density lipoprotein; oxLDL—oxidized LDL; PDGF—platelet-derived growth factor; ROS—reactive oxygen species; SR—scavenger receptor; VCAM-1—vascular cell adhesion protein 1. Created with Biorender.com, licensed version.
Accumulation of circulating low-density lipoproteins (LDL) in the subendothelial layer of the arteries is the initial stage in the development of atherosclerosis. Following endothelial injury, LDL adhere to extracellular matrix proteins exposed by the activated endothelial cells [16]. As LDL is trapped in the vascular wall, it undergoes oxidation by locally secreted reactive oxygen species (ROS), being transformed into oxidized LDL (ox-LDL) [17]. Ox-LDL, along with native LDL, are taken up by macrophages via scavenger receptors (SR), leading to macrophage transformation into foam cells [18]. Both macrophages and foam cells release a variety of proinflammatory cytokines such as soluble CD40 ligand, interleukin-1 (IL-1), IL-3, IL-6, IL-8, IL-18, and tumor necrosis factor-alpha (TNF-α) [19]. IL-1β, IL-6, and TNF-α stimulate the liver production of C-reactive protein (CRP), the most common inflammatory biomarker [20].
Besides macrophages/foam cells, endothelial cells are also involved in atherosclerotic plaque formation. After exposure to damaging factors, such as dyslipidemia, smoking, hypertension, or viruses, endothelial cells upregulate the transcription of nuclear factor-κB (NF-κB) and expose molecules that enhance leukocyte adhesion to the endothelium, such as P-selectin, E-selectin, vascular cell adhesion molecule-1 (VCAM-1), and intercellular adhesion molecule-1 (ICAM-1) [21]. Together with ox-LDL, activated leukocytes migrate through the injured endothelial layer to the intimal layer of the vessel wall, where they produce inflammatory mediators which sustain the inflammatory process [6].
Likewise, arterial SMC respond to chemoattractants produced by activated leukocytes, such as platelet-derived growth factor, which results in SMC migration from the tunica media of the artery wall to the intimal layer. There, SMC produce collagen, elastin, and glycosaminoglycans, which are the principal components of mature atherosclerotic plaques [19].
T-lymphocytes play a dual role in atherosclerosis. Regulatory T-lymphocytes (Tregs) which produce transforming growth factor β (TGF-β) and IL-10, as well as Th-17 lymphocytes that secrete IL-17, have a protective effect, promoting stabilization of atherosclerotic plaques due to the expansion of the fibrous cap [22]. In contrast, Th1 lymphocytes promote atherosclerosis by exuding proinflammatory components such as interferon-γ and TNF-α [23].
Platelets have an underappreciated role in atherogenesis. One of the mechanisms of their contribution is through their interactions with endothelial cells which result in the release of chemokines and expression of adhesion molecules (E-selectin, P-selectin, VCAM-1, ICAM-1). This is then followed by IL-1β secretion leading to the recruitment of immune cells [24]. Furthermore, platelets are able to participate in the oxidization of LDL and to promote LDL uptake by macrophages, thus contributing to the development of atherosclerosis [25].
The nucleotide-binding oligomerization domain-like receptors, pyrin domain-containing 3 (NLRP3) inflammasome, which is a component of the innate immune system, has been linked to several inflammatory disorders such as periodic cryopyrin syndromes, Alzheimer’s disease, diabetes, atherosclerosis, and more recently atrial fibrillation [26][27]. The NLRP3 inflammasome is responsible for caspase-1 activation and the secretion of proinflammatory cytokines IL-1β and IL-18 during microbial infection and cellular damage thus can contribute to ASCVD development [26].
Cells involved in the development of atherosclerosis secrete EVs and miRNAs that modulate inflammation of the blood vessel wall [18]. EVs are lipid membrane particles that are naturally released from cells into blood and other body fluids, which transport biomolecules between cells [28]. Multiple EVs subtypes are associated with pathophysiological processes underlying atherosclerosis and CVD, such as endothelial dysfunction, accumulation of lipids in the vessel wall, migration of immune cells, calcification of atherosclerotic plaques, and plaque rupture [29]. Moreover, EVs are involved in the adverse myocardial remodeling following acute myocardial infarction (AMI), making them not only biomarkers but also therapeutic targets in CVD [30][31]. The role of EVs in atherosclerotic development and progression has been summarized elsewhere [32].
MiRNAs are small, non-coding RNAs that regulate post-transcriptional gene expression [33]. For example, miR-181a-5p and its passenger strand miR-181a-3p act as negative post-transcriptional regulators of the NF-κB signaling pathway, thus contributing to inflammation. Restoring the expression of these miRNAs retarded not only the inflammation but also the progression of atherosclerosis in apoE−/− mice [34]. Additionally, miR-30c and miR-126p had a protective effect on ASCVD. MiR-30c was associated with hyperlipidemia and atherosclerosis reduction in the Western diet-fed mice, while miR-126p limited atherosclerosis by suppressing Notch1 inhibitor delta-like-1 homolog in Mir126−/− mice [35][36]. Conversely, miR-143 and miR-145 were characterized as vascular SMC physiology regulators, which are involved in SMC proliferation, migration, and apoptosis. miR-19b, miR-33, miR-92a, miR-144-3p, miR-155, and miR-342-5p were also shown to promote atherosclerosis [37][38][39][40][41][42]. Therefore, it is suggested that the dysregulation of miRNAs expression is associated with ASCVD development and progression [43]. Similar to EVs, miRNAs are also involved in post-infarction myocardial repair and could be used to design novel therapies to prevent and/ or reverse myocardial damage [44][45].
Discussing the role of inflammation in the development of atherosclerosis, good models of systemic inflammation are patients with Chronic Inflammatory Rheumatic diseases (CIRD) such as rheumatoid arthritis (RA) or systemic lupus erythematosus (SLE). Patients with CIRD are at increased risk of accelerated atherosclerosis compared with a healthy population [46]. Moreover, therapy with anti-inflammatory drugs such as anti-TNF or anti-IL-1 significantly reduces the risk, pointing to inflammation as the cause of the excessive risk of ASCVD [47].
Altogether, inflammatory processes involved in ASCVD are complex and require further investigation. Accumulating evidence shows that not only classical triggers of endothelial injury and inflammation but also infections may trigger and aggravate ASCVD. It remains unclear whether the mechanism by which infections affect atherosclerosis is similar to that in CIRD or whether additional factors play a role. There are also no direct comparisons between CIRD and infectious diseases in terms of ASCVD risk, thereby raising a need for additional research on this topic. However, the next paragraph focuses on infections as a risk for ASCVD.

The mechanisms underlying the increased risk of ASCVD in course of infections and discussed in this paragraph are summarized in Figure 2. 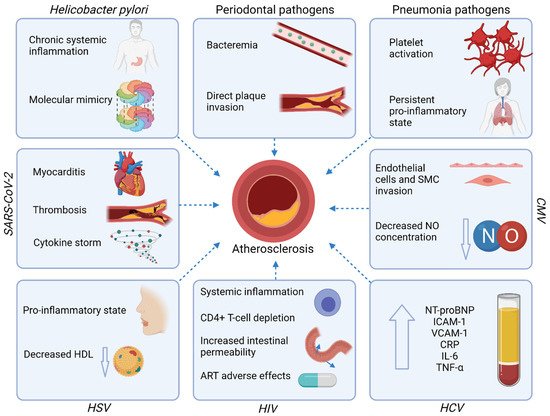 Regarding the excessive risk of ASCVD related to infections, it is crucial to establish the effective prevention and treatment of both entities. Here, we focus on the currently available strategies. However, since the residual risk related to chronic infections remains an important cardiovascular risk factor, there is an ongoing search for new therapeutics with the anti-inflammatory and/or anti-infective modes of action. This is particularly important given the strong literature reports of the ineffectiveness of anti-infective drugs, including antibiotics in the prevention of ASCVD [48]. The anti-inflammatory and/or anti-infective mechanisms of currently available drugs that may affect residual risk are shown in Figure 3. A summary of clinical studies evaluating the cardiovascular outcomes in patients receiving anti-inflammatory drugs is shown in Table 1. 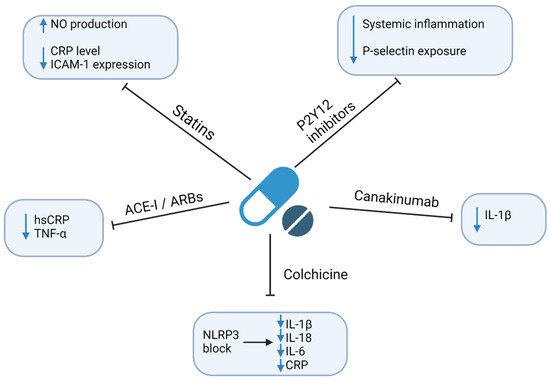 Several infections including H. pylori infection, periodontal disease, and viral infections are associated with the increased risk of ASCVD, both directly by damage to the heart muscle and vasculature, and indirectly by triggering a systemic proinflammatory state. Hence, beyond the optimal management of the traditional ASCVD risk factors, infections should be considered as an important non-classical cardiovascular risk factor to enable early diagnosis and appropriate treatment. Numerous drugs routinely administered in patients with ASCVD including statins, P2Y12 inhibitors, and ACEi/ARBs were shown to have anti-inflammatory and/or anti-infective properties. However, no randomized controlled trials have hitherto evaluated their efficacy in patients with infective diseases. Novel strategies aiming at residual risk reduction have been proposed, including colchicine, anti-cytokine drugs, and methotrexate. However, more evidence regarding the risk-to-benefit ratio and cost-efficiency of these drugs is required before their clinical routine implementation in patients with infection-related high residual risk of CVD. Additional research is also needed on new therapeutic strategies, such as, for example, anti-atherosclerotic vaccines that already exist in the literature and where the biggest challenge is finding the appropriate antigen to immunize [48]. Nevertheless, further progress in understanding and therapeutic application of the relationship between infections/chronic inflammation and ASCVD requires well-designed, large studies with long-term follow-up.