The Musaceae family has significant potential as a source of lignocellulosic fibres and starch from the plant’s bunches and pseudostems. These materials, which have traditionally been considered waste, can be used to produce fully bio-based composites to replace petroleum-derived synthetic plastics in some sectors such as packaging, the automotive industry, and implants. The fibres extracted from Musaceae have mechanical, thermal, and physicochemical properties that allow them to compete with other natural fibres such as sisal, henequen, fique, and jute, among others, which are currently used in the preparation of bio-based composites.

The current period lived by humanity is related to the plastic age due to its dependence on developing diverse low-weight, durable, and low-cost products, generating a world production of approximately 260 million tons each year. However, the massive consumption of plastic products and their rapid disposal has contributed to the accumulation of waste in remote parts of the planet, including landfills, land surfaces, and ocean waters [1]. In ocean waters, plastic waste is released from the continents through mouth basins and is concentrated by marine currents in specific locations in the North Atlantic and Pacific Oceans (North and South). This material exposed to marine conditions with solar exposure contributes to the generation of microplastics through photodegradation and fragmentation, being consumed by a wide variety of aquatic living beings. The ecosystem’s impact is also evidenced by various species death that ingests plastic macroparticles [2]. The single-use containers and packaging sector contributes with different plastic items (such as glasses, plates, containers, cutlery, and straw), with close to 50% of the total plastic discarded in the mentioned areas, being two-thirds constituted by thermoplastic resins. The alternatives to counteract the environmental problem caused by plastics are the use of biodegradable polymers, recycling, and/or the use of synthetic polymers as fuel [1][3]. Using biodegradable materials such as starches, lignocellulosic fibres, polylactic acid, polyhydroxyalkanoates, and environmentally friendly bio-based composites can be developed, providing properties that compete with traditional non-biodegradable composites or materials. Among these, starch and lignocellulosic fibres blends stand out due to their high availability, and they provide a high modulus of elasticity, lower water absorption, greater thermal stability, mitigation of the starch retrogradation effect, and reduction of costs in bioplastics that currently demand the food packaging sector [4]. These macromolecules can be found in various crops such as cereals, tubers, roots, and fruits [5][6]. Among the different fruits, the banana stands out for being a source of raw material for the development of new bio-based composites, highlighting that the matrix can be obtained from the starch and flour coming from the bunch, while the reinforcement is extracted from the lignocellulosic fibres coming from the pseudostem [7]. For the separation of banana’s and plantain’s starch and flour, physical and chemical processes are carried out, which require gelatinisation of the material through temperatures above 70 °C and mechanical action to obtain its respective thermoplastic state [8].
In contrast, the lignocellulosic fibres must be extracted by mechanical methods and subsequently subjected to a surface modification of a physical and/or chemical type to achieve greater interfacial adhesion with the matrix, achieving the expected benefits in the final bio-based composite [9].

Starches and flours for processing in the food and non-food sectors can be obtained from the Musaceaes’ bunches. The most relevant physicochemical, physical, and thermal properties for processing and extraction or isolation methods are reported below.

Starch is the carbohydrate that occurs in the greatest proportion in the endosperm of cereals, reserve parenchyma in tubers, roots, and fruits, and is found in the form of granules in the cells, forming discrete structures. Their size can vary between 1 and 100 µm, depending on their botanical source, although there is an inevitable heterogeneity of size in the same plant. The shape can vary, being round, elliptical, oval, lenticular, or polygonal. According to the above, the smallest granules correspond to rice and amaranth starches, with diameters between 1 and 10 µm. Potato starches have diameters between 20 and 100 µm, while those of maize starches are between 15 and 20 µm, and those of cassava starches are between 5 and 45 µm [5][10][11][12]. In general, the different starch granules’ surface area varies according to the botanical origin and is a question mark in several studies. Starch is a biopolymer composed of anhydrous α-linked glucose units. This biomolecule is made up of two polysaccharides, amylose, formed by α−1,4 bonds, and its structure is based on linear chains and amylopectin, presenting α−1,4 and α−1,6 bonds, the latter bonds being responsible for generating branches that give starch its native semi-crystallinity [5][6]. The proportions and molecular weights of amylose and amylopectin in starch from any botanical source determine the physicochemical properties. The molecular weight of amylose chains is in the order of 1 to 2 × 105 Daltons, and their ratio varies between 20 and 30%. In amylopectin, on the other hand, the molecular weight is greater than 2 × 107 Daltons and ranges from 70 to 80%. Both polymers are made up of alpha-D-glucose units. Amylopectin consists of 20 to 30 glucose units [13]. The physicochemical properties usually studied in starch are proximal composition, colour analysis, molecular weight, solubility, swelling power, water absorption, and relative amylose content. Structural characterisation (size, shape, and crystalline nature of the granule) and rheological characterisation (swelling power, gelatinisation temperature, and viscosity in solutions) are also taken into account, these properties being complementary in the physicochemical study [8][14][10][15][16].

It is based on the grinding, sieving, and drying of a seed, tuber, root, or fruit, maintaining its original components (starch, fibre, fat, protein, and ash) and reducing its water content. Starch is one of the macromolecules with the most significant participation, achieving close to 60% [17].

2.3. Starch and Flour from Musaceae

The shape of the starch granules from the Musaceae tends to be elongated oval with some irregular endings (Figure 1). In the case of the Gros Michel banana starch granules, their dimensions are range from 10 to 20 µm wide and 35 to 70 µm long, while the starches of the Dominico hartón and FHIA 20 plantains range from 20 to 30 µm wide and 18 to 32 µm long, and 50 to 65 µm wide and 39 to 75 µm long, respectively. The amylose/amylopectin ratio was reported as 22.76/77.24 in Gros Michel, 31.12/68.88 in Dominico hartón, and 28.58/74.42 in FHIA 20 [18]. Since amylose is a polymer constituted by linked glucose, regular starches present values close to 20% [5][6], with Musaceae being a starch source with a relevant contribution of amylose. The size of the starch granule, the degree of crystallinity, the amylose/amylopectin ratio, and the interactions of the polymeric starch chains in the amorphous phase interfere in the conditions of starch processing where the temperature of gelatinisation is involved [19]. Due to their amylose content with values close to 30%, most of the banana and plantain species achieve gelatinisation temperatures from 70 °C and are part of the starches group resistant to enzymatic actions [8]. In the flour obtained from Musaceae, its composition includes protein contributions between 2.57 and 3.16%, lipids with values lower than 0.56, fibre between 1.18 and 1.65%, and starch between 83.2 and 88.3% [20][21]. When evaluating the Terra plantain, the particle distribution is slightly lower in the flour than the starch, finding an average value of 31.7 and 47.3 µm, respectively. In contrast, the gelatinisation temperature of the flour is higher concerning its starch, being 76.2 and 74.9 °C, respectively, due to the more significant presence of fibre and fat in the flour, giving greater thermal stability to the starch granules before gelatinisation [20]. 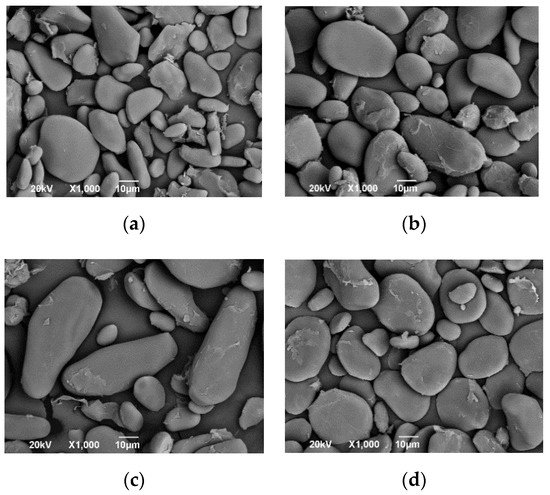 2.4. Methods of Extracting Starch and Flour from Musaceae

Obtaining banana starch is based on wet milling from a blender or disc mill and the use of a solvent. Among the types of solvents, there are water, sodium bisulfite, citric acid, sodium hydroxide, or sodium sulfite. One or more solvents can be considered to extract starch to achieve higher yields and purity [22]. Starches from bananas and plantains have achieved a purity of between 82.3 and 99%, with a considered variation depending on the extraction method, degree of ripening, and the species to be used [18][22]. In the process of starch extraction corresponding to the banana and plantain, the following unitary operations are required: washing, peeling, cutting of the pulp, immersion of sodium bisulfite, wet milling using a solvent, sieving using different opening sizes, centrifugation of the solvent, drying of the starch paste, dry milling, sieving, and packing of the starch [18]. To reduce processing times, spray dryer can be used. However, it is more expensive to purchase. In the case of flour extraction, a smaller number of unit operations are required, starting with the washing of each whole finger of banana or plantain, immersion in a solution of potassium metabisulphite (1%), cutting into chips, drying by forced convection, dry milling by use of a blade mill, sifting and packaging of the flour [22]. Yields vary according to the species, achieving 50% (dry base) in the Terra plantain, while in banana species such as Alukehel and Monthan, values of 31.3 and 25.5% were achieved on a dry base, respectively [20], while the Dominico hartón plantain was 65.9% on a dry base (25.7% on a wet base) [21].