Wastewater from domestic, industrial and commercial developments maintains considerable amounts of thermal energy after discharging into the sewer system.

The wastewater in domestic, industrial, or commercial buildings maintains considerable thermal energy quantities, which is discharged to the sewer system with temperature ranging from 10 to 25 ∘C. It is estimated that 6000 GWh per year of thermal energy is lost in sewers in Switzerland [1], equivalent to 7% of country’s total heating demand. Wastewater in sewer pipes in Germany is estimated to contain enough energy to heat 2 million homes [2]. This resource can be exploited through heat exchangers and heat pump technologies, applied at different points in the sewer system, from end-user to water treatment, that is, at the component level, in buildings, in public sewers, and at WWTPs. These locations have their respective advantages and disadvantages concerning their energy, economic and environmental prospects. For example, low heat loss is present at component level WWHR, while greater heat density is available at WWTPs.

There are four main possible locations within the sewer system for energy recovery from wastewater: (i) at the component level; (ii) at building level; (iii) in the sewer pipe network, and (iv) from WWTPs. Figure 1 shows these possible options of WWHR. 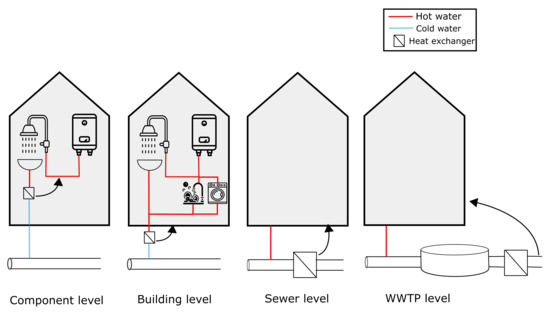 At this level of WWHR, heat is recovered from wastewater directly after it is produced in specific activities relating to a single component (e.g., showering, cooking, food processing, etc.). Heat is extracted using a heat exchanger directly after the component used in the activity. The recovered heat may be used to preheat incoming cold-water, as in domestic or commercial shower facilities, or be used in conjunction with a heat pump for other purposes. Figure 2 shows the basic working principle of a vertical counter-flow heat exchanger. 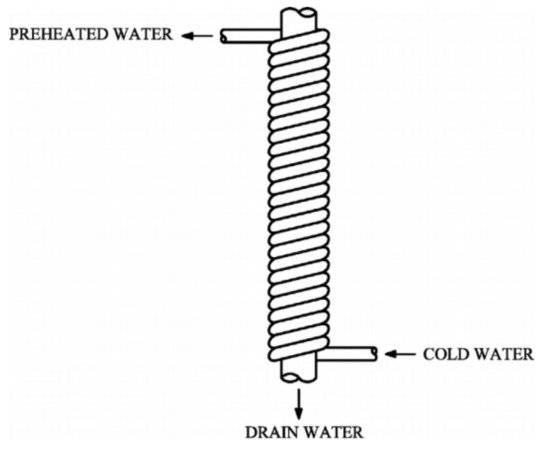 Figure 2. Basic working principle diagram of a vertical WWHR unit [3].
Shower water heat recovery is the most common application seen in practice at this level. This application has the advantage of a continuous simultaneous counter flow of wastewater and incoming cold-water supply for use in the shower. Therefore, heat recovered here can be achieved with high effectiveness, and there is no time lag present between waste heat availability and heat demand for showering, eliminating the need for heat storage and resulting losses [4]. A general schematic of shower water heat recovery is shown in Figure 3. 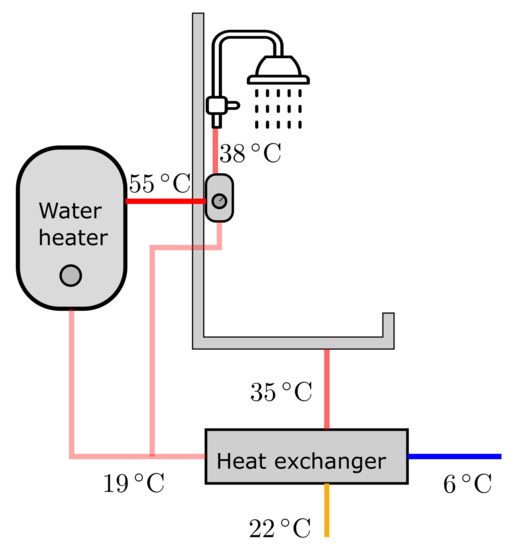 At this level, heat is recovered from the collective wastewater discharge from a single whole building is considered. The wastewater flow and temperature characteristics of this discharge depend upon building type. Wastewater in domestic building can maintain a temperature of 10–25 ∘C over the year [13]. The energy savings from WWHR at the building level can be higher when compared to the individual component level due to the higher volume of wastewater and accumulation of multiple hot water activities [18]. However, discharge at the building level also includes cold wastewater in the mix, which reduces energy potential. At this level, to perform heat recovery, wastewater is commonly collected in a holding tank, and heat is recovered using a heat exchanger [23][24] or water source heat pump [13][14][15]. For fouling prevention, usually a grease trap system is used to intercept debris in wastewater. If the recovered heat is not immediately used, it can be stored in a hot water tank (HWT) for later use. A general schematic diagram of WWHR with a heat pump is shown in Figure 4. Researchers have investigated the potential of WWHR at the building scale with numerical feasibility studies, and experimental lab-scale approaches [14][15][25][26][27][28][29].

Another critical location for energy recovery from wastewater is at WWTPs. There are three possible heat recovery points at a WWTP—from raw wastewater before treatment, from partially treated water within the WWTP, and from effluent discharge after treatment. Heat recovery from raw wastewater is similar to recovering heat from within the sewer pipe system. At the WWTP, the influent’s temperature and the available energy are highest, offering the greatest potential for WWHR. However, the water quality is the lowest, offering significant technical challenges in exploiting it. As we move through the WWTP, the temperature reduces and the water quality increases, whereby at the effluent discharge, the technical difficulty of recovering heat from raw wastewater is removed at the cost of a lower temperature fluid.
WWTPs process and treat large amounts of wastewater from sewers and then discharge into near water bodies on a daily basis. This cleansed water temperature is stable and has low daily and weekly variations compared to the influent temperature [1][30]. Even in wet weather, the effluent temperature does not have erratic variations like the influent temperature [1].
The potential of WWHR in treated wastewater is higher than sewer pipe wastewater since the downstream water from WWTP can be cooled down to much lower values [1] and effluent water flow is higher. Relatively low variation in water temperature improves the performance of heat pump systems. Since the water is already treated, another advantage is lower bio-fouling and solid matter interference with the heat exchanger, thus improving heat transfer efficiency. However, since the heat consumers are usually not located near WWTP, a major disadvantage of this energy recovery option is that the heat supply must be transported over long distances, thus leading to high heat losses.
Energy consumption in WWTPs is large, for example WWTPs contribution to primary energy consumption in the US is 0.8% of national energy consumption [31]. Most of the energy consumption is in the form of electricity. On the other hand, WWTPs have a significant amount of energy at their disposal, coming from raw and effluent water and other processes like electricity generation from the incineration of biogas produced from anaerobic digestion and bio-solids [32]. Therefore, WWTPs can be considered as regional energy cells which can deliver energy into local energy supply networks (heat and electricity) [33]. However, with heat supply, the feasibility of such energy cells depends on consumer distance and the treatment capacity of the WWTP. Also, a major constraint for recovered heat usage is that a local district heating network should be present to which recovered heat can be injected. Therefore, on-site consumption can be preferred in such cases to heat buildings in the WWTP precinct.
Regarding the energy potential, heat available in effluent at WWTP is substantial due to high water volumes. Other than water amount, energy potential depends upon the temperature drop of effluent after energy recovery. Based upon different studies in the literature, the temperature drop can be up to 8 ∘C; however, it depends upon the lower temperature limit allocated by relevant environment protection organizations to protect the ecology of receiving waters. Đurđević et al. [34] presented a theoretical case study to analyze the utilization of WWHR in the city of Rijeka, Croatia. The location considered for the case study had a WWTP in operation with a capacity of 540,000 PE and 3000 L/s of effluent water at maximum load. Based upon considered water flow and a temperature drop of 6.5 ∘C, 75 MW of heat recovery potential was shown, which was 72% of the existing natural gas power heat plant capacity. The study also analyzed the COP of the proposed heat pump, which decreased from 4.7 to 2.87 with an increase in condensation temperature from 60 ∘C to 90 ∘C.
As previously mentioned, the delivery of recovered heat from a WWTP to consumers could be impractical because of the high heat losses; or in some situations, a district heat distribution network may not be present. Therefore, in such cases, on-site usage of recovered heat can be more sensible. However, in these cases, only a fraction of available heat in wastewater is used. For example—Chae and Kang [35] performed a study to estimate the energy independence of WWTPs with three different energy resources—photovoltaic panels, small-hydropower and WWHR. Under the considered design conditions for photovoltaic panels, hydropower turbine, and heat pump, 6.5% of total energy consumption was estimated to be covered by the proposed energy resources. Heat recovery from wastewater had the highest potential among them, at around 3.65%. The payback period of the heat recovery system considered in the study was estimated to be 6.8 years. Even though the recovered heat supplied all of the heating demand required by the buildings in the WWTP precinct, the heating demand was only limited to 2.2% of available heat (temperature drop = 3 ∘
C) in effluent water. Therefore, much of the available heat in effluent water remained unexploited.
Apart from supplying the space-heating and hot water demand of WWTPs, recovered heat can also be used for low-temperature treatment processes. Pochwala and Kotas [36] presented such a case study. The heat was recovered from raw wastewater and used to heat an on-site building to raise the temperature of a sequential biological reactor (SBR) to the optimum value for the treatment process. The recovered heat supplied 98% of the heat demand of WWTP.
It is evident that heat recovery from effluent water at WWTPs is an abundant source of energy supply. However, to realize the full potential of this form of energy recovery, a local district heating/cooling network is necessary. Most existing heat recovery practices from WWTP effluent around the world are large scale capacity heat pumps and supply heating/cooling to district heating, and cooling networks [1].