Pancreatic cancer is a highly aggressive and lethal malignancy mostly due to its late-stage presentation. This malignancy is difficult to diagnose, monitor, and treat, hence the development of novel diagnostic and prognostic biomarkers and better therapeutic strategies are urgently needed. Several groundbreaking discoveries over the past decade on cancer-associated exosomes demonstrated an association between exosomal miRNA and the development, progression, and therapy-resistance of pancreatic cancer.

Due to the variations in tissue types within the pancreas, it gives rise to tumors of multiple origins broadly categorized into exocrine and endocrine tumors [1]. Among them, pancreatic ductal adenocarcinoma (PDAC) is responsible for the highest morbidity not only in exocrine tissue-derived malignancy but also among all pancreatic cancer types [2]. PDAC can be localized, locally advanced invasive, or metastasized to distant organs, [2] most commonly the liver [3][4]. Alterations in other tumor suppressor genes include CDKN2A [5], TP53 [6], and DPC4/SMAD4 [7].

Surgical removal of the tumor mass is considered as the only curative treatment of PDAC [8][9], but most cases are being diagnosed at more advanced stages [8][10] and only 15–20% of patients are eligible for surgery [8][9]. Despite the success of surgery, a large number of patients experience disease recurrence either locally or distantly within a year, keeping the five-year survival rate as low as 20% [11]. A number of pathological factors, such as resection margin status as well as lymph node and perineural invasions, are associated with such recurrence [12][13][14][15]. The carbohydrate antigen 19-9 (CA 19-9) is frequently elevated in 75–85% of PDAC patients [16], but it lacks sensitivity (80%) and specificity (73%) as a biomarker of PDAC [8][10][17].

One of the major players in tumor microenvironment-associated intercellular communication is exosomes. The cargo of exosomes contains lipids, proteins, metabolites, and genetic material, including DNA, mRNA, microRNAs (miRNAs), and long non-coding RNAs (lncRNAs) [18][19][20]. Mounting evidence has revealed that exosomal miRNAs are intensely connected with various cancers, including pancreatic cancer [21]. In this current review, we discuss recent advancements in diagnosis, prognosis, and therapeutics for pancreatic cancer utilizing novel findings of exosomal miRNAs.

Differential expression of miRNAs is observed in normal pancreatic ductal cells and pancreatic cancer cells. The elevation of about twenty circulatory miRNAs has been demonstrated in pancreatic cancer patients. The miRNA panel detected in plasma served as promising biomarkers for the diagnosis of pancreatic cancer [22][23][24][25][26][27][28][29]. For being one of the most important cargos of exosomes [30], exosomal miRNAs went through excessive profiling in different cancers, including pancreatic cancer [31][32][33][34][35][36].

In pancreatic cancer cells, Sun et al. showed that IL-26 level was regulated by the exosomes loaded with miR-3607-3p secreted by natural killer (NK) cells, which suppressed disease progression in vivo [37]. It has been demonstrated that activated pancreatic stellate cells (PSCs) continuously release miR-21-enriched exosomes that are endocytosed by pancreatic cancer cells. The abundant miR-21 inside cancer cells activates RAS/ERK signaling and induces epithelial-to-mesenchymal transition (EMT) [38]. This allows cancer cells to repair their DNA and repopulate with residual tumor cells [39]. The exosomal miRNA-mediated regulations of pancreatic cancer are summarized in Figure 1. 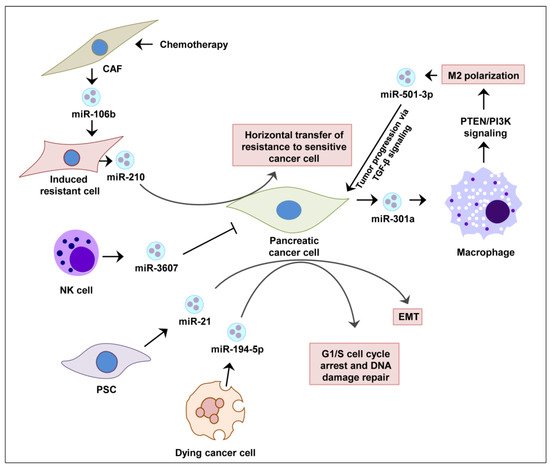 3. Exosomal miRNAs as a Prognostic Biomarker in PDAC

The exosomal miRNA-mediated cell-to-cell signaling in the tumor microenvironment plays a significant role in the progression of cancer [40][41]. In the primary tumor exosomes, selective miRNAs are enriched, exceeding the levels of normal cells that affect specific signaling pathways associated with cancer progression [42][33][35][43]. In a mechanistic study of pancreatic cancer, it has been demonstrated that enriched miR-21 and miR-221 take part in the crosstalk among pancreatic cancer cells, pancreatic stellate cells, and cancer-associated fibroblasts [44]. It is speculated that such crosstalk was governed by the release of exosomal miRNAs from cancer cells to neighboring cells.

miRNAs can be utilized to assess therapy response. For example, plasma miR-221 levels are elevated in pancreatic cancer patients after just three weeks of lapatinib and capecitabine treatment. Exosomes from lapatinib- and capecitabine-treated pancreatic cancer patients likely contain elevated levels of miR-221. Therefore, exosomal miR-221 may serve as a potential biomarker to predict therapy response against these two drugs during the treatment period.

Recent studies have constructed the foundation of exosomal miRNA biomarker research for the assessment of proliferation, migration, and invasion in pancreatic cancer. However, the exchange mechanism of exosomes between cancer cells and stromal cells and how they regulate recipient cells remains to be defined. Sufficient longitudinal studies are essential for the proper identification of exosomal miRNA as prognostic biomarkers in PDAC.

4. Exosomal miRNAs in the Treatment of PDAC

A recent in vivo study has demonstrated the ability of exosomes to cross the blood–brain barrier and deliver siRNAs into the brain [51]. Evidence also showed the absorption of therapeutic exosomal content by target cells in a mouse model when introduced intravenously. Additionally, toxic side effects have not been observed in vivo even after repeated injection of exosomes derived from mesenchymal or epithelial cells [52]. The tolerability of exosomes collected from mesenchymal stem cells was demonstrated by Kordelas et al.

A growing body of research findings suggests that exosomes can be used for treating pancreatic cancer in the clinic for disease stabilization or reduction of aggressiveness [53]. The use of exosomes has been drawing intense attention because of their capability to transfer diverse biomolecules, including miRNAs, that may modulate the tumor microenvironment in an interactive fashion [53].

The initiation of pancreatic cancer is a multi-step process that starts with the mutations of certain genes, such as KRAS, TP53, and CDKN2A [54]. More than 90% of cases show activating KRAS mutations in pancreatic cancer [55] that are being considered attractive targets by any means, including through exosomal regulation. In 2017, engineered exosomes loaded with siRNAs were first introduced in a mouse model for PDAC. After subsequent verification of their safety and efficacy in organoid and patient-derived tumor xenograft models, it can be expected that engineered exosomes can be used as vehicles to deliver miRNAs as therapeutic agents for the targeted treatment of PDAC.

Thus far, the use of engineered exosomes in pancreatic cancer is still in its infancy. There are ample studies that identified a number of miRNAs for targeting pancreatic cancer [56][57]. Xia et al. demonstrated that miR-7 can block pancreatic cancer via suppression of cell proliferation, migration, and invasion. Using such a strategy, it can be expected that the delivery of exosomal miR-7 will have more pronounced effect in the treatment of pancreatic cancer.

In future studies, the molecular and cellular processes by which miRNAs as exosomal cargoes exert their effects on the growth and invasive properties of cancer cells should also be examined under hypoxic experimental conditions. As discussed earlier, some cancer-relevant miRNAs are exclusively upregulated in hypoxic cancer cells. While most studies are being performed under normoxic conditions, the experimental results and may not be readily applicable to in vivo cancer models or humans. Another under-studied area is the feedback loop of exosomal-miRNA-based regulation besides unidirectional signaling, which also requires further attention. So far exosome-based treatment is limited to in vitro and in vivo experiments for pancreatic cancer. Besides preclinical, clinical investigations are essential to identify universal exosomal miRNA signatures for the diagnosis, prognosis, and treatment of pancreatic cancer. In summary, extensive research on exosomal miRNAs in pancreatic cancer is needed to overcome current obstacles and guide current progress ahead toward a novel biomarker discovery and a new therapeutic avenue.