Herbicide resistance in weeds is a global threat to sustaining food security. In India, herbicide-resistant Phalaris minor was the major problem in wheat for more than two decades, but the continuous use of metsulfuron-methyl (an ALS inhibitor) to control broadleaf weeds has resulted in the evolution of ALS inhibitor-resistant Rumex dentatus L. This review summarizes the current scenario of herbicide resistance in R. dentatus, along with its ecology and management perspectives. Studies have provided valuable insights on the emergence pattern of R. dentatus under different environments in relation to tillage, cropping systems, nutrients, and irrigation. Moreover, R. dentatus has exhibited higher emergence under zero tillage, with high infestation levels in rice-wheat compared to other wheat-based cropping systems (sorghum-wheat). Alternative herbicides for the management of resistant R. dentatus include pendimethalin, 2,4-D, carfentrazone, isoproturon, and metribuzin. Although the pre-emergence application of pendimethalin is highly successful in suppressing R. dentatus, but its efficiency is questionable under lower field soil moisture and heavy residue load conditions. Nevertheless, the biological data may be utilized to control R. dentatus. Therefore, herbicide rotation with suitable spray techniques, collecting weed seeds at differential heights from wheat, crop rotation, alternate tillage practices, and straw retention are recommended for addressing the resistance issue in R. dentatus in North India conditions. Overall, we discuss the current state of herbicide resistance in R. dentatus, the agronomic factors affecting its population, its proliferation in specific cropping systems (rice-wheat), and management strategies for containing an infestation of a resistant population.

Rice-wheat is the most dominant cropping system in India, occupying about 10.3 million ha of the Indo-Gangetic Plains (IGP). The system accounts for 26% of total cereal production and provides 60% total calorie intake [1][2]. The system accounts for approximately 23% and 40% of the total rice and wheat areas, respectively, and accounts for about 85% of total cereal production [3]. Moreover, the rice-wheat cropping system (RWCS) is well proliferated among farmers, with the introduction of fertilizer- and irrigation-responsive short-statured high yielding varieties, development of irrigation facilities, crop-tailored mechanization for seeding and harvesting, along with encouraging government policies like the minimum support price (MSP) [3][4][5]. In India, a growth analysis of RWCS demonstrated that area and productivity increased at growth rates of 0.5 and 1.9% for rice and 1.6 and 2.3% for wheat, respectively, from 1950-51 to 2015-16 [6].
Nevertheless, the sustainability of the RWCS and national food security is being halted by the emergence of second-generation problems such as the depletion of good quality groundwater [7], the appearance of multi-nutrient deficiency, extensive residue/straw burning [8][9], the emergence of new insects and pests, diseases, declining factor productivity, and an escalating cost of cultivation [4][10]. Furthermore, the adoption of RWCS also led to a shift in weed flora, with the dominance of some of problematic weeds like Phalaris minor and Rumex dentatus. In this direction, the accelerated development of herbicide resistance in wheat-associated weeds also limits potential wheat productivity [11].
Earlier, herbicide resistance was reported in P. minor in north-western IGP against isoproturon, a substituted urea photosystem II (PS II)-inhibiting herbicide [12][13][14]. But recently, new weed species among grassy (Avena ludoviciana Durieu., Polypogon monspeliensis L. Desf.) and broad-leaved weeds (Chenopodium album L. and Rumex dentatus L.) have evolved resistance against acetolactate synthase (ALS) inhibitor herbicides [11]. Rice and wheat are the two most essential crops from an herbicide industry perspective, as these crops account for about 20 and 28%, respectively, of the total herbicide consumption in India [15].
The short market life of recommended herbicides is a matter of concern as the development of these novel resources requires huge investment. Furthermore, the crisis is aggravated by the fact that no new herbicidal chemistry has been developed or discovered [16]. In this regard, concerted efforts are required towards ecologically based integrated weed management to reduce the resistant biotype selection pressure associated with the single herbicide mode.

The evolution of resistance in weed accessions against herbicide is a global issue [17] and at present, there are 515 herbicide-resistant weeds (unique cases) in 263 weed species (152 dicots and 111 monocots) [18]. Herbicide resistance in weed accessions has been reported in 94 crops in 71 countries. Across the world, 341 unique cases of herbicide resistance among 77 weed species have been reported in wheat crops, out of which 68, 19, 10, and 9 weeds have evolved herbicide resistance against acetolactate synthase (ALS) inhibitors, acetyl CoA carboxylase (ACCase) inhibitors, synthetic auxins, and photosystem II (PS II) inhibitors (ureas and amide), respectively [18].
Earlier, herbicide resistance in India was restricted to only P. minor in the north-western regions against isoproturon, a substituted urea photosystem II inhibiting herbicide. This resulted in a severe reduction in the wheat yield over 0.8–1.0 million hectares wheat cultivated [13][14][19][20][21]. At that time, rigorous efforts were made to quantify possible reasons for this evolution of herbicide resistance and reports have shown that over-reliance on this herbicide for more than 10–15 years along with faulty spray techniques, under dosing, poor seed replacement, and the adoption of monotonous RWCS [13][22][23][19][24], have resulted in the widespread occurrence of resistance in P. minor. The problem of herbicide resistance has been further aggravated by the evolution of multiple resistance against newly recommended herbicides to control isoproturon-resistant P. minor [24][25][26], namely clodinafop, pinoxaden (ACCase inhibitors), sulfosulfuron (ALS inhibitor). Biotypes resistant to clodinafop exhibited cross-resistance to fenoxaprop (fop-group), tralkoxydim (dim-group), and pinoxaden (den-group), and sulfosulfuron-resistant biotypes demonstrated cross-resistance to mesosulfuron and pyroxsulam [11][22].
Further, a new problem arose in the north-western IGPs of the Haryana and Punjab regions during recent years with the evolution of metsulfuron resistance in R. dentatus, mainly in the RWCS. It is the dominant broadleaf weed of rabi season, and besides wheat, it infests rabi cereals such as barley [27], oat [28], oilseed crops including rapeseed mustard [29], and fodder crops including Egyptian clover [30]. In the eastern zone of Haryana, where the RWCS was dominant [20], R. dentatus infested about 45% of wheat fields, as compared to 15% in the western zone (non-RWCS). Furthermore, to tackle the isoproturon-resistant P. minor biotypes, dependence on grassy herbicides such as clodinafop, pinoxaden, and sulfosulfuron was sharply increased, which also favored the dominance of BLWs, especially R. dentatus. The development of herbicide resistance in R. dentatus to metsulfuron-methyl has been reported and confirmed recently under pot and field conditions [31][32][33][34][35]. The first case of herbicide resistance in R. dentatus was reported against Group B/2 herbicides, known as ALS inhibitors (inhibit acetolactate synthase enzyme), i.e., metsulfuron-methyl [36].
Studies have demonstrated cross-resistance to iodosulfuron, triasulfuron, florasulam, iodosulfuron-methyl-sodium, mesosulfuron-methyl, halauxifen + florasulam, and pyroxsulam [11][37]. ALS is the first enzyme that completes the biosynthesis of three branched-chain amino acids (leucine, isoleucine and valine). Inhibition of ALS enzyme leads to the starvation of plant from lack of these three amino acids and causes plant death. ALS inhibitors which inhibit the ALS enzyme are broad-spectrum, post-emergence herbicides, first commercialized in 1982 with the introduction of chlorsulfuron for broadleaf weed control in cereals such as wheat, rice, and soybeans. Due to the high selection pressure associated with high inherent biological potency even at lower doses and greater reliance, this group has surpassed all known different modes of action herbicides in terms of the number of resistant weed species [38].
The herbicide resistance mechanism could be due to the target site (TS) and non-target site (NTS). The majority of cases of resistance to ALS herbicides involve the presence of modified ALS enzymes with a reduced possibility of herbicide binding [17][38]. TS-based resistance consists of a change in the molecular target of the herbicide action, which decreases its binding to the herbicide and results in reduced herbicidal action. TS-based resistance is generally associated with the amplification/over-expression of the target gene or an alteration in the target protein [17]. In NTS, a lower amount of active herbicide reaches the target site, which is associated with reduced uptake, translocation, and enhanced herbicide sequestration or metabolism [17][38].
In India, NTS was the second case of herbicide resistance and first among broadleaf weeds. Farmers were using metsulfuron-methyl, a sulfonylurea herbicide, to control broadleaf weeds in wheat since 1998. This herbicide provided effective control of major broad-leaf weeds at a very low application dose (4 g ha−1). The herbicide metsulfuron-methyl was very effective against R. dentatus for the last 15 years in the wheat crop in India, but due to sole reliance on it for controlling broadleaf weeds, R. dentatus became resistant to this herbicide [32]. A pot-based study also demonstrated that the biotype of R. dentatus from Panipat (Haryana) was not effectively controlled by metsulfuron even up to 4X dose (16 g ha−1) [35].
Seeds of Rumex dentatus were collected from the major rice-wheat growing districts (Figure 1B,C) of Haryana and Punjab [31]. In Haryana, 38 biotypes of R. dentatus were resistant to metsulfuron at 5 g ha−1 and mostly confined to Kaithal district (6 biotypes). In Punjab, only one biotype of R. dentatus collected from the Barnala district demonstrated resistance to metsulfuron [31]. 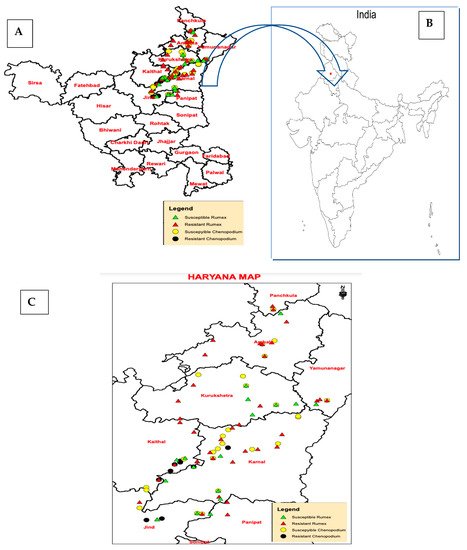 Figure 1. Map showing the distribution of herbicide resistance in Rumex dentatus and Chenopodium album weed species in different districts of Haryana (A,C) in India (B) [31].
The reasons for the failure of chemical weed control with the emergence of herbicide resistance might be sole reliance on metsulfuron, poor spray technology, or a sub-lethal dose of metsulfuron. Furthermore, a study based on a seed collection of R. dentatus from the major irrigated rice-wheat growing districts of Haryana and Punjab states of India [33] demonstrated that 61 R. dentatus biotypes from Haryana and 15 biotypes from Punjab were resistant to metsulfuron-methyl (Figure 2).

Figure 2. Response of R. dentatus biotype with graded doses (control, ¼ X, ½ X, recommended agricultural dose (X = 5 g a.i. ha−1), 2 X and 4 X of metsulfuron methyl (from left to right).
The evolution of herbicide resistance in multiple weeds associated with wheat is an emerging threat to the sustainability of crop production in IGPs. Farmers are facing the nuisance problem of multiple herbicide-resistant weed biotypes and, consequently, yield reduction due to the unavailability of effective alternative herbicides and lack of knowledge in tackling the issue of herbicide resistance in wheat-associated weeds (Table 1) [33][36].
Table 1. Status of herbicide resistance in weeds in India [11].
A diagnostic survey concluded that farmers in Haryana used lower doses of herbicides than the recommended dose, lower spray volumes, spraying at an advanced stage of weeds, and keen interest towards a single flood jet/cut or hollow cone nozzle instead of using flat fan nozzles for the application of herbicides in wheat [39]. These were possible reasons for the aggravation of multiple resistance in P. minor and could also have been the factors for defying the efficacy of metsulfuron-methyl against R. dentatus.
The world over, the first case of herbicide resistance in R. dentatus and the second in Rumex genus was reported in early 2011, when Rumex acetosella was reported as resistant to PS II inhibitors (hexazinone) in Canada. Recently, Rumex obtusifolius was reported as resistant to ALS inhibitors (B/2), and herbicides (florasulam, metsulfuron-methyl, and thifensulfuron-methyl) were reported from France in 2017 as a third case [18]. Thus, about 171 weed species have shown resistance to ALS inhibitor herbicides with 36 weed species. The mutation occurred in Trp 574 to Leu, followed by 26 weed species with amino acid substitution Pro 197 to Ser.