The Hippo pathway regulatory network is complex and diverse, and its regulatory mechanism is still poorly understood. A key challenge for the future will be to explore the mechanisms by which the Hippo signaling pathway plays regulatory roles in different environments, and to develop targeted cancer treatments. We believe that targeting the Hippo pathway will lead to fruitful therapies in the near future.

During tumor development, cancer cells are exposed to dynamic changes in the tumor microenvironment and availability of nutrients [1][2][3]. Hence, cancer cells need to adapt their physiological processes and metabolism to these changes so as to maintain, survive, proliferate, and even undergo behavioral changes such as invasion and metastasis [4][5]. This is a complex signaling cascade, including cellular perception and transduction of stimuli in the microenvironment, as well as intracellular metabolic reprogramming to support the high demand for energy and building blocks [6]. One such pathway is the Hippo signaling pathway, which regulates gene expression in response to changes in extracellular and intracellular cues, leading to changes in cell behavior [7].

The Hippo pathway is a unique signaling module that regulates cell-specific transcriptional responses and responds to a wide range of intrinsic and extrinsic cues [8][9][10]. Based on the ability of the yes-associated protein/transcriptional coactivator with a PDZ-binding motif (YAP/TAZ) to regulate signal transduction, metabolism adaptation, and phenotypic changes, it is expected that the Hippo signaling pathway will function as a central hub for cancer development. In this review, we will introduce the regulatory role of the Hippo pathway in tumor development, signal transduction, and metabolism, and discuss possible cancer treatment strategies targeting the Hippo pathway.

2. Role of Hippo Signaling in the Development of Cancer

Hippo signaling, first discovered in Drosophila, has been implicated as a key regulator of organ size based on its important roles in regulating cell proliferation and apoptosis [11][12][13], and in regulating tissue-specific stem cells. regulates cell proliferation and apoptosis by inactivating Yki [14]. Evidence also demonstrates the critical role of the Hippo pathway in cancer stem cell biology, including EMT, drug resistance, self-renewal, and differentiation [15][16]. The role of the Hippo pathway in inhibiting cell growth, proliferation, promoting apoptosis, and regulating stem cell biology is the key to tumor inhibition [17].

Excessive activation or deletion of the Hippo signaling pathway will lead to abnormal cell growth and dysregulation of tissue and organ homeostasis, which will further lead to abnormal tissue and organ development, and impaired regeneration or tumorigenesis [18][19][20][21]. In fact, studies have demonstrated the important role of the Hippo pathway in the development of many kinds of cancer [22][23]. Numerous correlations between aberrant Hippo pathway protein expression and the cancer’s clinical stage (evaluated comprehensively according to tumor size, lymph node status, and distant metastasis) have been reported (as reviewed in [24]). As reviewed recently, the high expression of YAP/TAZ could promote breast cancer metastasis, and targeted therapy against YAP/TAZ can effectively block breast cancer metastasis [25].

As profiled by The Cancer Genome Atlas (TCGA), Hippo pathway genes such as large tumor suppressor1/2 (LATS1/2) The defect of mammalian sterile 20 like1/2 (MST1/2), an important component of the Hippo pathway, would lead to YAP activation, sustained liver overgrowth, and the eventual development of hepatocellular carcinoma and cholangiocarcinoma [26]. Studies have focused on how upstream inputs affect the activity of the Hippo signaling pathway, how it functions, and the contribution of its dysregulation to cancer development. Research on the mechanism of the Hippo regulatory network in cancer development has made some achievements, and its role in signal transduction and metabolism regulation is the most understood at present.

Metabolism is a fundamental function of cells that can be reprogrammed to meet the energy and material needs of cells through the regulation of signaling pathways. In turn, metabolic pathways or metabolites can modulate a network of signaling pathways, allowing cells to coordinate their metabolism and behavior in an integrated manner [27]. In the past several years, increasing studies have provided appreciation and understanding of how Hippo signaling controls cellular and organismal metabolism, and the diverse mechanisms through which metabolites and metabolic signals, in turn, influence Hippo signaling [8][27]. The Hippo signaling pathway is a highly conserved tumor suppressor pathway, which was identified as emerging nodes in the coordination of nutrient availability with cancer development and tissue homeostasis (Table 1).

The development and growth of tumors increase the demands for energy and macromolecules and is often accompanied by the activation of Hippo signaling. Consistent with this, the Hippo signaling pathway and its downstream effectors, YAP and TAZ, have been identified as important regulators of many cellular metabolic pathways of tumor cells, including glucose metabolism, lipid metabolism, amino acid metabolism, and mitochondrial homeostasis [8][40]. The Hippo signaling pathway regulates multiple metabolic pathways (Figure 1), which enables it to coordinate the availability of energy and metabolites to regulate cancer development. 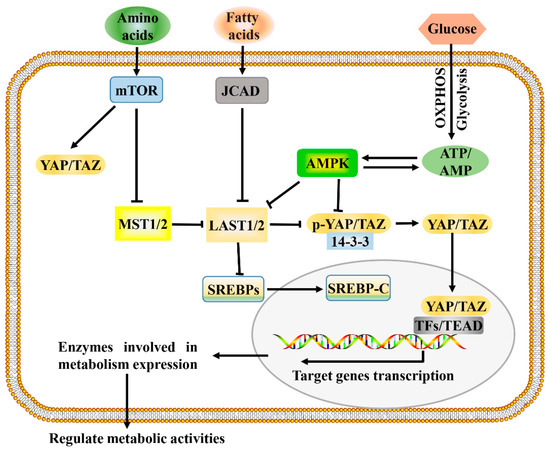 It is well known that the metabolic reprogramming of cancer cells tends to enhance aerobic glycolysis, and glucose is one of the major sources of cancer cell metabolism. Studies have reported that Hippo signaling is regulated by aerobic glycolysis, and the reduction of glycolysis leads to the inhibition of YAP/TAZ transcriptional activity [8][40][44]. A 2-DG (a glycolysis inhibitor) treatment downregulates the overall levels of the YAP/TAZ gene signature in MCF10A and MDA-MB-231 mammary cells, illustrating that glycolysis regulates YAP/TAZ transcriptional activity [36]. These results suggest that glucose and glycolysis are involved in the regulation of the Hippo pathway.

As reviewed, alterations on lipid metabolism contribute to the activation of several important oncogenic signaling pathways, including Hippo signaling [45][46]. Oncogenic mutant p53, acting as a positive transcriptional cofactor for SREBPs, leads to increased mevalonic acid and promotes YAP activity in tumor cells [38]. The mevalonate pathway, involved in the synthesis of cholesterol, bile acids, steroid hormones, and statins used to inhibit this pathway, was found to efficiently suppress YAP/TAZ nuclear translocation [38]. It has been reported that palmitic acid inhibits YAP by upregulating MST1, thereby inhibiting endothelial cell proliferation, migration, and angiogenesis [47].

As mentioned above, the Hippo pathway is a major signaling pathway that is responsible for human cancer development. The Hippo pathway’s contribution to cancer has sparked interest in the development of potential therapeutics [48]. Given the association of elevated and hyperactive YAP/TAZ with many cancers, the anti-cancer therapeutic strategies targeting the Hippo pathway would aim at inhibiting the activities and functions of YAP and TAZ directly or indirectly [49]. The study indicated that YAP activates the DNA damage response pathway, and by targeting YAP, dasatinib acts as a chemosensitizer for a subset of molecular targeted drugs [50].