Pulmonary hypertension involves a continuous remodeling of the pulmonary vasculature, that is similar to cancer in some aspects due to the uncontrolled proliferation of certain cells. This leads to muscularization of pulmonary vessels, development of vascular lesions, continuous vasoconstriction, and final heart failure. Current pharmacological therapies only target three molecular pathways and as a result, patients can only improve their life quality but not without suffering adverse side effects. This fatal lung disease lacks effective treatments. Therefore, there are compelling reasons to find new molecular targets and novel therapies that reverse the development of the disease. In this context, miRNA-based therapies have shown promising results that will provided in the following text while explaining the important role that had played their nanoencapsulation.

Pulmonary hypertension (PH) is a condition characterized by increased mean pulmonary arterial pressure. During the compensatory phase, the right ventricle of the heart deals with pressure overload to maintain the blood flow by chamber transformation. This translates into an adaptive increase in artery wall thickness which involves an uncontrolled cell proliferation. Molecular mechanisms underlying the physiopathology have not been completely elucidated but since there is no cure for this fatal disease it urges to find methodologies for the selective detection and treatment of PH.[1] PH has been classified in five different groups which depend on the origin of the disease. Pulmonary arterial hypertension (PAH) is the commonly the most studied case of PH. In PAH, the small arteries (and in some cases also the venules) in the lung are obstructed due to different reasons such as HIV infection, autoimmune disorders, and others but it can be also idiopathic. All PH groups courses with endothelium dysfunction and vascular remodeling in the lungs which has been extensively described that is accompanied by a metabolic reprogramming in the heart and the lung only explored until recently.[2][3][4] It is known that arterioles can undergo vasoconstriction imbalance, cellular remodeling, thrombosis, and cell proliferation. Pulmonary artery endothelial cells (PAECs), pulmonary artery smooth muscle cells (PASMCs), myofibroblast, pericytes, platelets, and inflammatory cells play key roles during the disease development. The vascular remodeling during PH involves PAECs dysfunction, such as proliferation, interaction with PASMCs, and transdifferentiation and the accumulation of PASMCs in obstructive vascular lesions.[5] Figure 1 shows schematically a transversal section of a pulmonary artery developing PH. 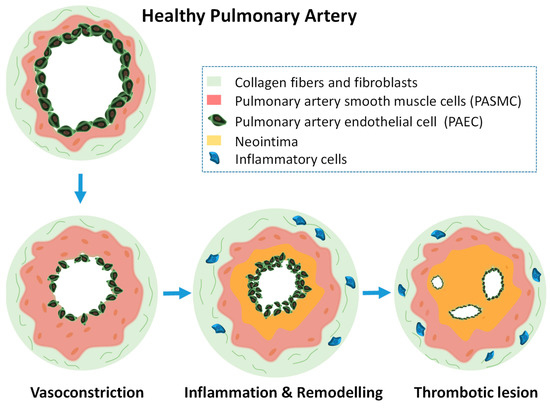 Figure 1. Schematic drawing of a transversal section of a pulmonary artery developing PH and the structural alterations in the different cellular levels. Initially smooth muscle cells excessively proliferate producing vasoconstriction. After that, inflammation, remodeling, and thrombotic lesions will follow.

Currently, PH treatments only help to relieve the symptomatology and do not stop the progression of the disease. The medical therapies available for the treatment of PAH include calcium channel blockers, endothelin receptor antagonists, phosphodiesterase type 5 inhibitors and soluble guanylate cyclase stimulators, prostacyclin analogues, and prostacyclin receptor agonists.[6] miRNA dysregulation has been correlated to the physiopathology of PH and the use of miRNA-based therapies has emerged as new hope toward the reversion of PH symptomatology.[7] Table 1 summarizes a list of reported miRNA that could be efficient therapeutic targets for the treatment of PH. In many aspects, PH disease development resembles tumorigenesis. In PH and cancer the hyperproliferative and apoptosis resistant phenotype is partially related to impaired mitochondrial dynamics and in both cases there is a metabolic dysfunction (Warburg effect) characterized by a shift from oxidative glucose metabolism to aerobic glycolysis which provides the survival conditions for highly proliferating cells.[8] Given these similarities multiple miRNAs that are aberrantly expressed in cancer are also dysregulated in PH. For instance, miR-204 and miR-205 are downregulated in pulmonary artery small muscle cells (PASMs) in PAH as well as in many cancers.[9] In both cases the downregulation of these miRNAs induces metabolic dysfunction and enhanced PASMCs proliferation. MiR-204 and miR-205-based treatments have demonstrated to be efficient for decreasing cell proliferation and metastasis in few cancers and recently it has been reported their potential use for reversing PAH in a murine model.[10][11] Its encapsulation and targeted release in the lungs could be advantageous for preventing the miRNAs being filtered by the kidney, decrease off-targeted effects, and improve intracellular delivery.

Table 2shows a small portion of the possible miRNA targets and some of their reported targeted genes that could be used to treat PH. Considering that only for dysfunctional PAECs more than 20 different dysregulated miRNAs have been already reported, it will become essential to use in silico approaches to identify the most relevant miRNA targets for developing novel treatments against PAH [27]. In this context, we referred readers to the work recently published by Bonnet et al. [28].

Currently, the treatment of PH with miRNA-based therapies is still in an early phase, similar to siRNA-based therapies [29]. There are no clinical trials going on yet, but fortunately all reported pre-clinical trials up to now have shown significant beneficial effects and some of them have demonstrated an evident decrease of the arteriopathy and cardiac dysfunction. We have collected these examples in Table 2.

As can be seen in Table 2, some studies aimed at determining the possible therapeutic effect of a target miRNA using bare miRNA mimics or Antagomirs as a first assay. This was the case of the study carried out by Pullamsetti et al. in 2012. However, most of the reported research has been done using nanovectors known to improve transfection efficiency such as commercial lipofectamine or viral vectors [11][34]. For instance, in the study of the potential use of miR-145 as a therapeutic target, Caruso et al. was first evidencing the upregulation of miR-145 in humans with PAH and in animal models of PAH. Then, they used antimiR-145 delivered with commercial lipofectamine and showed that it prevented arteriopathy in hypoxic mice. Owing to this study, some years later McLendon et al. reported effective delivery and retention in the lungs of antimiR-145 loaded in more sophisticated cationic liposome-based nanovectors made of polymer-functionalized lipopolyamines that provided stealth properties [[32]]. Importantly, their results showed an evident decrease of right ventricle pressure, decreased artery muscularization, and lower degree of cardiac dysfunction in murine models of severe PAH while avoiding off-target effects and toxicity. These two last features are essential for the translation of miRNA therapies into clinics but they are still a challenge in the field.

The dose of miRNA required to obtain a therapeutic effect depends on the animal model of PH and many other factors. However, we could draw some general conclusions from Table 2. Comparing two different miRNA therapies in mice housed in hypoxic conditions, reduction of arteriopathy could be achieved in both cases after 2–3 intravenous injections per week for 2 weeks (6 injections in total) [33]. When miRNAs were not encapsulated, a higher concentration in treatment, 8 mg/Kg as compared with 2 mg/Kg, was required for the administration of Invivofectamine. In rat models with monocrotaline-induced PH or hypoxia and Sugen, the therapeutic effect was achieved only after 2–3 intravenous injections. Similarly, the concentration of miRNA from the injections was lower for encapsulated therapies (2 mg/Kg vs. 5 mg/Kg) [32][31]. The dose could also decrease with direct administration to the lungs, as demonstrated by Courboulin et al. [10]. Only two nebulizations (1 per week) of encapsulated miRNA mimics were required to obtain a therapeutic outcome of miR-204a mimics in a PH model with monocrotaline. This administration method could also avoid some of the potential off-target effects of miRNA-based therapies, but this has not yet been confirmed. Despite the lungs offer the advantage of local delivery of therapies, as can be seen in Table 2, the majority of the miRNA treatments are currently being administered intravenously. This is due to the early stage of these therapies and the barriers that still remain for real targeted therapies such as (1) controlling lung clearance, (2) achieving a homogeneous biodistribution, (3) obtaining stable miRNA carriers for nebulization, and (4) obtaining selective delivery systems to the target cells. In addition, what is not yet known is whether the decrease in PH pathology is temporary or lasting [35]. Future advances in other miRNA therapies such as cancer are likely to help address these challenges for PH [36].

In the field of non-coding RNA therapies, combination therapies are expected to be more efficient than single-target RNA; Sindi et al. have obtained outstanding results in this direction already in PH [33]. These authors first focused their work on deciphering whether the Krüppel-like factor 2 (KLF2) signaling pathway in PAECs could be a novel molecular target to combat PH. They then demonstrated that the combination therapy of exosomal miR-181a-5p and miR-324-5p was helpful in reducing right ventricle pressure and hypertrophy, cell proliferation and angiogenesis in murine models. Interestingly, they compared single miRNA delivery with combination therapy displaying a higher efficiency for the latter. This study, in addition shows the potential use of exosomes as efficient carriers for miRNA-based therapies, illustrates perfectly how important is to detect many different miRNAs to find the best therapeutic outcome.

Figure 2depicts the few but promising nanovectors applied to date to treat PH with miRNA therapies and their reported cell targets (also reported in Table 2). Nanovectors may target PASMCs because of dysfunctional endothelium patency in HP [37]. However, the use of nanovectors functionalized with targeting molecules could show significant improvements to avoid side and off-target effects while improving therapeutic outcomes. Peptides and antibodies have been already applied successfully in miRNA-based therapies when targeting other organs such as heart or liver [38][39][40][41], so we are convinced that this strategy will be promptly applied in PH treatments. There is plenty of room for improvement in miRNA therapeutics for PH.

Figure 2. Schematic drawing of a cross section of two pulmonary arteries that develop PH and are being treated with nanopharmaceuticals (represented as small red and black spheres) that target the endothelial cells of the PAEC arteries (A) or smooth muscle cells PASMC (B). Endothelial dysfunction leads to a patent state in which NPs can leak into the pulmonary vasculature and reach PASMC more easily than in healthy arteries. The nanovectors collected in Table 2 are shown here.