The production of high-quality olive oils implies the generation of vast quantities of solid residues and/or wastewaters that may have a great impact on terrestrial and aquatic environments because of their high phytotoxicity. Depending on the techniques used for olive oil production, namely, on the type of horizontal centrifugation (two-phase or three-phase), the process most adopted to separate olive oil from olive paste obtained after malaxation, different by-products are obtained.

Olive leaves represent an agricultural waste by-product obtained during the harvesting of olive trees for table olives and olive oil production chains [1][2]. It has been estimated that pruning alone produces annually 25 kg of waste represented by branches and leaves per olive tree [3]. A considerable amount of olive leaves is also discarded during the olive drupes washing process at the beginning of the olive oil production chain (see Figure 1), reaching a value ranging from 8% [4] to 10% [5] of the total weight of olives subjected to milling. In general, olive leaves are not included in the definition of olive mill solid waste [6] but, together with olive stones, they are described as solid residue [7]. The use of solid residue is of great economic and social importance for the Mediterranean area, as it is accumulated in large amounts [7]. Although limited by their pungency, olive leaves are traditionally used in many countries as feed for livestock or simply disposed by burning. Olive leaves represent a potential source of bioactive compounds, as indirectly proved by the use of their extracts in the context of folk medicine for centuries, with the first medicinal application attested in history dating back to the ancient Egyptian civilization [1]. During centuries, the use of olive leaves preparations in traditional medicine has spread in many different countries [8] (see Table 1). Recently, preparations based on olive leaves, in the form of liquid extracts or tablets, have been commercialised as natural supplements against diabetes, high blood pressure, cardiovascular diseases, urinary tract infections, chronic fatigue symptoms and to improve immune system [9]. Olive leaves preparations also find their application in the cosmetic industry for their anti-ageing activity, and due to their antibiotic and antiparasitic properties as supplements for animal health [10]. Moreover, olive leaves extracts may be used as additives to increase food shelf-life, safety and functionality for their antioxidant and antimicrobial features [11][12]. Interestingly, their probiotic properties have been recently found to promote the Lactobacillus casei survival during cold storage of cheese [13]. Their addition to beer [14] and to a Southern Italy traditional cereal-based baked product known as taralli [5] has been found to increase the inherent polyphenols content of these products. It is also worth noting that phenolic compounds and tocopherols, normally found in olive oils, play a protective role against oxidative stress [15] and are able to extend the extra virgin olive oil shelf-life due to their antioxidant properties [16]. Since the use of synthetic antioxidants may lead to health risks, recent papers have featured that olive leaves, having a high antioxidant activity [17][18][19] due to their phenolics, can exhibit strong preventive effects against olive oil oxidation. The addition of olive leaves during oil extraction process, specifically during olive milling, has thus been recently evaluated in detail and found to lead to the enrichment in chlorophyll [20][21], carotenoids, flavonoids, and in the derivatives of oleuropein, which is the main secoiridoid occurring in olive leaves (see Figure 2) [22]. 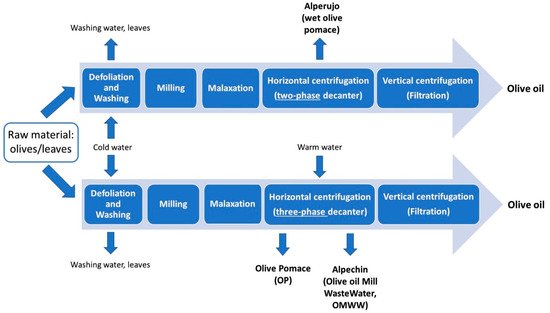 The promising antimicrobial and antioxidant hallmarks of phenols contained in olive leaves by-products have also led to produce bio-active films for food packaging by integrating olive leaf extract or powder in plastic polymers [32][33]. 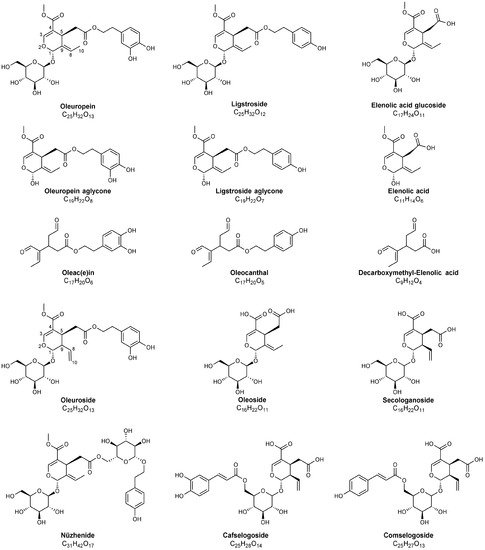 Figure 2. Chemical structures of major secoiridoids identified in olive leaves, pomace and in olive oil mill wastewater using MS techniques. Note that hemiacetalic forms of elenolic acid and of oleuropein and ligstroside aglycones are reported; dialdehydic open-structure isoforms are indicated for oleac(e)in, oleocanthal and decarboxymethyl-elenolic acid. The carbon atoms numbering typically adopted for secoiridoids has been reported for oleuropein and oleuroside to emphasize the positional isomerism occurring for these compounds, related to the position of the exocyclic C=C bond.