Recent studies have shown various metabolic and transcriptomic interactions between sulfur (S) and phosphorus (P) in plants. However, most studies have focused on the effects of phosphate (Pi) availability and P signaling pathways on S homeostasis, whereas the effects of S availability on P homeostasis remain largely unknown. In this study, we investigated the interactions between S and P from the perspective of S availability. We investigated the effects of S availability on Pi uptake, transport, and accumulation in Arabidopsis thaliana grown under sulfur sufficiency (+S) and deficiency (−S). Total P in shoots was significantly increased under −S owing to higher Pi accumulation. This accumulation was facilitated by increased Pi uptake under −S. In addition, −S increased root-to-shoot Pi transport, which was indicated by the increased Pi levels in xylem sap under −S. The −S-increased Pi level in the xylem sap was diminished in the disruption lines of PHT1;9 and PHO1, which are involved in root-to-shoot Pi transport. Our findings indicate a new aspect of the interaction between S and P by listing the increased Pi accumulation as part of −S responses and by highlighting the effects of −S on Pi uptake, transport, and homeostasis.

Total P accumulation in shoots reproducibly increased by –S accompanied by the increased Pi level in shoots  (Figure 1b). In contrast, P level in the insoluble fraction was not affected by –S in shoots (Figure 1c). These results highlighted Pi accumulation in shoots as part of plant response to –S. Given the vital role of these essential nutrients, the interactions and coordination between S and P in response to their deficiencies could be essentially required to sustain better plant growth and development under these conditions.

2. Enhancement of Pi Uptake under –S

The increased levels of total P and Pi in shoots suggested a higher Pi acquisition under –S (Figure 1). To support this hypothesis, we analyzed Pi uptake with the two ways of analysis. One was the analysis of Pi withdrawal from the hydroponic media under +S and –S (Figure 2a). Plants were transferred to +S or –S hydroponic media and Pi levels in the media were analyzed at 0, 1, and 3 days after starting the treatment. The decrease of Pi levels in the media from the starting day (0 day) was calculated as the amount of Pi absorbed by the roots. Pi acquisition increased about three-fold under –S compared with that under +S (Figure 2a). With another way of Pi uptake analysis using the radioactive isotope of phosphorus (32P) (Figure 2b), we also found an enhancement of Pi uptake as an early response to –S.

Despite the enhanced Pi uptake under –S, Pi accumulation was remarkably higher in shoots comparing to that in roots, suggesting an enhancement in root-to-shoot Pi transport under –S (Figure 1). Thus, we analyzed Pi level in xylem sap of plants grown under different S conditions (Figure 3a). Plants were transferred to +S or –S hydroponic media and used for the collection of xylem sap. Pi level in xylem sap was significantly increased in WT under –S (Figure 3a), indicating that the root-to-shoot Pi transport was stimulated under –S. In contrast, sulfate level was strongly decreased in xylem sap (Figure 3a). 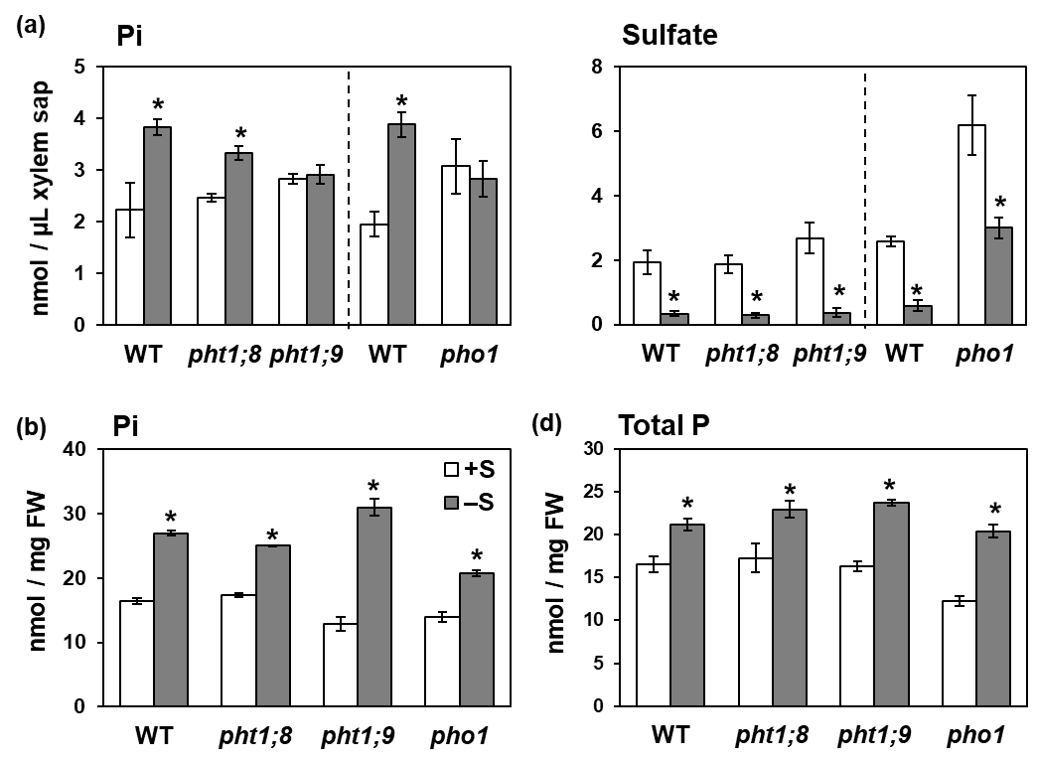 Interestingly, the –S-increased Pi level in xylem sap vanished in pho1 and pht1;9, while it was detected in pht1;8 and WT plants (Figure 3a). Sulfate levels were decreased by −S in xylem sap of all plant lines. These results indicated the involvement of PHT1;9 and PHO1 in increasing Pi levels in xylem sap under −S. Although PHO1 and PHT1;9 proteins were functional in pht1;9 and pho1, respectively, disruption of either of them was sufficient to interrupt the –S-increased Pi accumulation in xylem sap (Figure 3a). These results suggest that PHO1 and PHT1;9 possibly work together, either as complex or by regulating one another, to regulate the increased Pi accumulation in xylem sap under −S.

Figure 4. Effects of –S on Pi accumulation, uptake, and transport to shoot. Under –S, higher Pi uptake and Pi transport from roots to shoots were confirmed in this study, which ultimately leads to higher Pi accumulation in shoots under –S listing it as part of –S response in plants. Two transporters, namely, PHT1;9 and PHO1, were found to contribute to the increased Pi transport from root to shoot under –S. Further investigations required to identify the molecular mechanisms regulating the increased Pi uptake and accumulation under –S. Arrows (→) indicates “stimulated by –S”.

As demonstrated by the previous studies on the influences of P deficiency on the S metabolism, the Pi accumulation might be required to sustain plant growth under −S, or it can be an indirect consequence of plant response to −S. At this point, it is difficult to propose the real physiological meaning of the increased Pi accumulation in shoots under −S. In the original article, we confirmed that the increased Pi in shoots and xylem sap was a response to −S, by the re-addition of sulfate to plants subjected to −S. The increased sulfate levels in pho1 also indicated the negative interaction between sulfate and Pi (Figure 3a). Considering the close ionic status between sulfate and Pi (SO42− and PO43−), another interesting hypothesis is the requirement of Pi accumulation to maintain the cellular or subcellular ionic balance under −S, vice versa occurs under −P.

The -S-increased Pi uptake and transport to shoots can be regulated by a posttranslational mechanism, which we discussed in the original paper. Several posttranslational regulators are reported to physically interact with PHT1 proteins. Also, PHT1 members are capable of physically interact in the plasma membrane and form homomeric and heteromeric complexes, in dicot plants, providing an additional posttranslational regulatory mechanism for these transporters. In addition, Pi uptake might be stimulated under −S by the increased number of lateral roots and root hairs, as Pi uptake was reported to be improved by the enhanced lateral root and root hair formation under –P.