To address the low thermal conduction of the polymer materials, many kinds of thermally conductive fillers have been studied, and the carbon-based polymer composite is regarded as one of the most promising materials for the thermal management of the electric and electronic devices.

As microelectronic devices with the miniaturization and integration of electronic components have been developed, thermal management systems are getting more and more important. The considerable heat energy emitted from the dense packing of integrated circuits and electronic components can affect the performance and service life of microelectronic devices [1]. In the past, copper plates and aluminum pans were used to dissipate heat from conventional electronic products, such as large screen displays and desktop computers. However, these materials cannot be applied in microelectronic devices, which limit the weight and space inside them. Thus, to solve this problem, efficient thermal management systems should be designed with lightweight materials, which have outstanding thermal conductivity and processability. 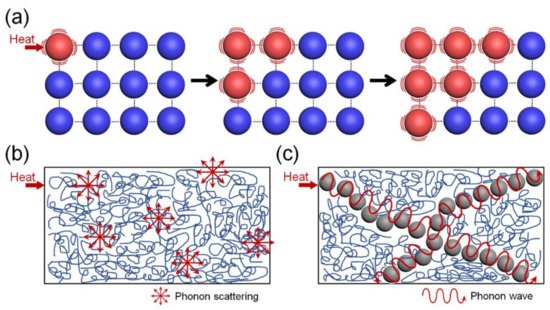 Figure 1. (a) Mechanism of thermal conduction in a crystalline material. Schematic diagrams of heat transfer in (b) a pure polymer and (c) a polymer filled with a thermally conductive filler.

2. Polymer Composites with a Continuous 3D Architecture of Carbon Fillers

The preconstruction of a continuous 3D connected network with the conductive fillers is an efficient strategy for the preparation of the thermally conductive polymer composites by reducing the thermal resistance at the filler–matrix interface and between individual filler particles, as schematically displayed in Figure 2. The thermal conductivity values of the recently published polymer composites with a continuous 3D architecture of carbon fillers are summarized in Table 1.

Graphene oxide (GO) is a graphene derivative with very good solubility and processability, produced by the chemical oxidation of graphite [10]. Feng et al. explained that the most important factors determining the thermal conductivity of 3D graphene network-based composites are the quality and density of the graphene 3D network [11]. In order to manufacture composite materials that satisfy both requirements, Yu et al. designed graphene hybrid foams with high density by the hydrothermal reduction of GO in the presence of GNPs (Figure 3a) [8]. Similar to the previously introduced hybrid graphene network, rGO acted as an interconnected network during the hydrothermal reduction process, while the incorporated GNPs played an important role in making the thermal conduction network denser. In addition to this process, graphitization of the graphene hybrid network at 2800 °C improved the quality of the graphene foams (removing the residual oxygen-containing functional groups and healing the defects of their reduced graphene oxide component). The resultant hybrid rGO/GNP/epoxy composites exhibited an ultrahigh through-plane thermal conductivity of 35.5 W·m−1·K−1 at a graphene loading of 19.0 vol% (Figure 3b).

Figure 3. (a) Schematic illustration of the preparation of 3D graphene hydrogel composites and (b) the thermal conductivity of the composites after treatment at different annealing temperatures [7]. Copyright the American Chemical Society. (c) Preparation procedure of the secondary CNTs and (d) thermal maps of the VACNT and 3D CNT [8]. Copyright Elsevier. (e) Schematic diagram for synthesizing phase change composites. (f) The configuration diagram of the compressed worm-like expanded graphite (WEG). The red circles represent the thermal resistance junctions between the adjacent WEG (or graphite sheets). The blue ellipses represent the partial WEG (or graphite sheets). The red arrows represent the heat flow. The yellow, semitransparent solid circles represent the connections between GNPs. (g) Thermal conductivity of the WEG/SA and 15-WEG/SA composite blocks as a function of the graphite loading [9]. Copyright Wiley.

Unlike the graphene aerogel structure, one dimensional shaped CNTs can form CNT arrays oriented in one direction, which has a great effect on the directional heat transfer of CNT array-based composite materials [12]. 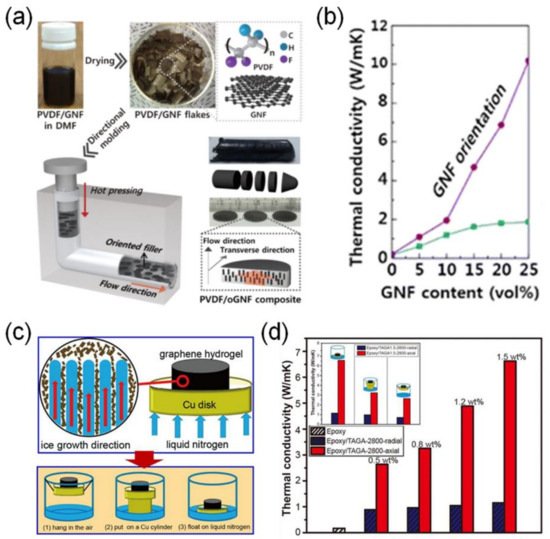 5. Stability of the Thermal Conductivity Performance of Polymer Composites

Despite the intensive efforts of many researchers, there are still many problems to be solved in order for the research of polymer composites to move from academic research to industrial applications. First, a mass production method for the formation of the 3D architecture and vertical alignment of carbon fillers has never been developed. It requires a novel approach that should be cost-effective and simpler than the previously published methods. Second, we need to find a way to minimize the thermal interface resistance between the carbon fillers and polymer matrix. Finally, it is necessary to develop an optimal method for preparing a thermally conductive yet electrically insulating carbon filler. In addition, research on the structural control and alignment of the electrically insulating carbon filler should be continued for the application of the carbon-based polymer composites to the thermal management of cutting-edge electronic devices in the future.