Melanin is a complex multifunctional pigment found in all kingdoms of life, including fungi. The complex chemical structure of fungal melanins, yet to be fully elucidated, lends them multiple unique functions ranging from radioprotection and antioxidant activity to heavy metal chelation and organic compound absorption. Given their many biological functions, fungal melanins present many possibilities as natural compounds that could be exploited for human use.

The term melanin refers to a diverse set of dark polymeric pigments found in all kingdoms of life. In fungi, melanin plays a panoply of protective roles against stress (Table 1; Figure 1) [1]. For example, fungal melanin can protect against ionizing radiation, including ultraviolet, X-ray, gamma-ray, and particulate radiation [2][3][4]. In addition, melanin can play a role in thermoregulation and protection against both heat and cold shock [5][6]. For example, melanized Cryptococcus neoformans cells were more likely to survive both heat shock and cold shock compared to non-melanized species [6]. Melanized endophytes in a mutualistic relationship with plants will often help their symbionts thermoregulate by dissipating heat and absorbing ROS [7]. Darkly pigmented yeasts and mushrooms tend to be more common at higher absolute latitudes and colder climates, suggesting that the pigment’s ability to capture radiation energy and dissipate it as heat provides an advantage in generating thermal energy [5][8]. Part of melanin’s role in thermotolerance may be attributable to its ability to react with and neutralize Reactive Oxygen Species (ROS), helping fungal organisms withstand the oxidative stress that often accompanies higher temperatures [9]. 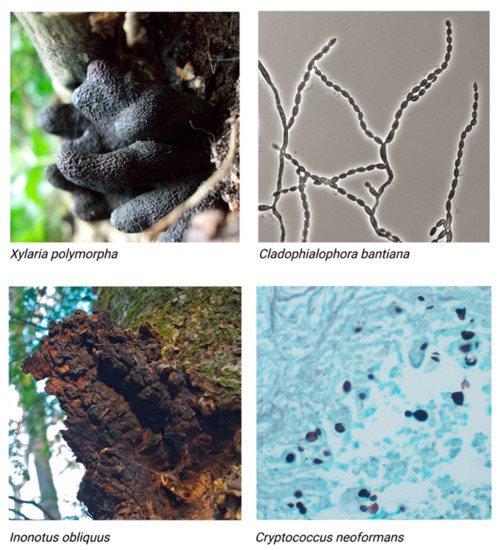 Figure 1. Panel of four images of different melanized fungi. Xylaria polymorpha (top left), a mushroom also referred to as ‘Dead Man’s Fingers.’ The stromata of X. polymorpha have an average total length, including rooting bases, of 5 to 8 cm by an average 2 cm diameter [10]. “Black fungi—Xylaria polymorpha (dead man’s fingers)” by ohi007 is licensed under CC BY-NC-SA 2.0; Cladophialosphora bantiana (top right), a pathogenic mold. C. bantiana conidia are approximately 5 to 10 μm in length [11]. “File:Cladophialophora bantiana UAMH10767.jpg” by Medmyco is licensed under CC BY-SA 4.0; Inonotus obliquus (bottom left), also known as the Chaga mushroom. Chaga appears as a sclerotia ranging from 5 to 40 cm in diameter [12]. “Chaga mushroom (Inonotus obliquus)” by Distant Hill Gardens is licensed under CC BY-NC-SA 2.0; Cryptococcus neoformans (bottom right), a pathogenic yeast. Cryptococcal cells range from 5 to 10 µm in diameter [13]. “Cryptococcosis—GMS stain” by Pulmonary Pathology is licensed under CC BY-SA 2.0. Images presented are not to scale.
Table 1. Examples of the functions of fungal melanin in living fungal organisms.
In addition, melanin can help fungi withstand chemical stressors. In halotolerant black yeast, melanin synthesis inhibitors diminished the yeast’s ability to grow in hypersaline environments [20]. Researchers posited that this could be due to the stabilizing effect that melanin has on the fungal cell wall, which would have permitted a more effective response to osmotic stress [20]. In addition, melanization has also been shown to protect fungal cells from heavy metal stress and hydrolytic enzymes [21][22]. In areas with low water content, melanin is associated with stress response to dry conditions. For example, heavy melanization was associated with survival in microcolonial rock fungi exposed to long periods of desiccation [28]. Some fungal species in spalted woods will melanize in response to periods of low water content, creating black zones in the wood [25]. These numerous protective functions enable melanized fungi to reside in some of civilization’s most extreme environments, from deep-sea vents to the International Space Station [29][30].
Given the numerous functional groups present in melanotic pigments, melanin can bind and interact with many different organic and inorganic molecules [1][17]. One notable example is melanin’s affinity for chelating metal ions, which can be toxic to fungal cells [17][18][19]. Fungal melanin also plays a role in protecting the fungus against the human immune response and is often associated with pathogenicity in Aspergillus fumigatus, Cryptococcus neoformans, and Talaromyces marneffei, among others [26].
Lastly, melanin is correlated with fungal virulence and has been implicated as a possible antifungal target [27]. While fungal melanin’s role in virulence will be limited in this review, please see [26] for a more thorough overview of this topic.
Some of the functions that melanin holds in biology can be utilized for societal benefit. These biological functions of radioprotection, stress response, and substrate binding, among others, often stem from melanin’s unique physical and chemical properties. When properly understood, scientists may be able to use melanin to carry out parallel purposes in the fields of industry, healthcare, and bioremediation.

Investigators wishing to work with melanin have several different options for sourcing the material, whether from animals such as cuttlefish, bacteria, fungi, or even synthetic reservoirs. Each of these options has different chemical properties and extraction protocols, conferring various advantages and disadvantages depending on the desired application [31]. For example, there are significant differences between fungal eumelanin and synthetic eumelanin, likely due to the fact that in vivo melanogenesis is vesicle-associated and enzymatically catalyzed, while synthetic melanogenesis often relies on spontaneous autopolymerization in solution [32]. In addition, synthetic melanins can be costly to produce [33]. Melanin from animal and plant sources can be less expensive to produce than the synthetic route, but it can be difficult to purify, as melanin is often associated with other biomolecules. Thus, microbial melanin is often touted as a low-cost and high-yield alternative to synthetic, animal, or plant melanin [33]. More specifically, fungal melanin is attractive due to the well-known protective functions in fungal organisms adapted to survive extreme environments [1].
Fungal organisms can produce different kinds of melanins (Figure 2). Most fungal melanins are allomelanins, which do not contain nitrogen [34]. DHN melanin is a common type of allomelanin derived from the polymerization of 1,8-dihydroxynaphthalene (DHN) [35]. The polyketide pathway that produces allomelanins begins with an endogenously produced molecule of acetyl coA or malonyl coA, which undergoes several reductions and dehydrations to produce 1,8-DHN [36]. The complete literature for scientific studies of fungal melanins dates back to the 1960s [37]. 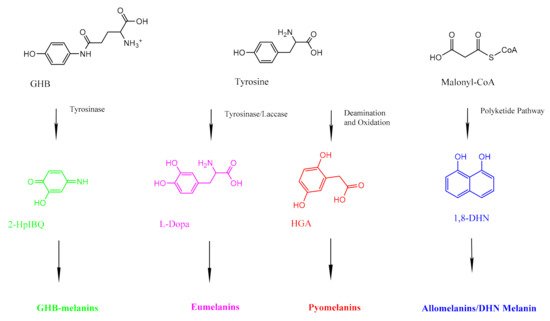 Figure 2. A simplified diagram showing the precursors for the three different kinds of fungal melanin. GHB-melanins (far left, green) are synthesized through a series of reactions with tyrosinase. Eumelanins (center left, pink) are synthesized via the L-Dopa pathway, which uses tyrosine as a precursor. Pyomelanins (center right, red) also use tyrosine as a precursor but are ultimately derived from HGA. Allomelanins (far right, blue) are derived from 1,8-DHN.
Some basidiomycetous fungi, such as Cryptococcus neoformans, produce eumelanin [38]. Eumelanins are derived from the amino acid tyrosine, and unlike allomelanins, they contain nitrogen [39]. Fungi synthesize eumelanins via the L-3,4-dihydroxyphenylalanine (L-dopa) pathway, which begins by using laccase to oxidize L-dopa into dopaquinone [40]. Eventually, the pathway produces dihydroxyindoles that can polymerize into eumelanins [40]. Cryptococcus neoformans cannot carry out this pathway without an exogenous substrate [40]. Pyomelanins are also derived from tyrosine, but they are produced by fungi such as Aspergillus fumigatus via the tyrosine degradation pathway, which involves the oxidative phosphorylation of homogentisate (HGA) [41].

Melanin’s unique properties allow it to have diverse applications in the field of human health, whether in a pharmaceutical, medical device, or antimicrobial. One of the most heavily studied health applications of melanin involves protection from radiation, given that fungal melanin is known for its radioabsorptive properties.
For example, in an experiment where mice were fed black mushrooms Auricularia auricila-judae and soon after irradiated, they tended to exhibit improved survival than the control over the course of 45 days [42]. Researchers postulated that melanin’s ability to dissipate Compton electron energy and scavenge free radicals would shield the mice’s gastrointestinal (GI) tract, preventing cellular apoptosis. When mouse GI tissue was examined 24 h post-irradiation, researchers found fewer apoptotic cells in the tissue of mice that had been fed black mushrooms. In addition, mice fed white mushrooms supplemented with melanin had the same outcome as those who were given melanized mushrooms to begin with, pointing to the role of melanin in the increased survival rates. However, because melanin is insoluble, its protective effects remained mostly limited to the gastrointestinal tract [42]. Melanin extract from Auricularia auricula also showed promise in reducing oxidative stress and enhancing survival in liver cells exposed to high doses of ethanol, providing a theoretical basis for the substance’s ability to treat alcoholic liver disease. The investigators associated their results with the liver cell’s activation of the antioxidase Nrf2 and the inhibition of the cytochrome CYP2E1, which produces ROS as it metabolizes ethanol. Additional investigations would further elucidate the pathway producing this phenomenon [43].
In a separate mice study, those given melanin from the fungus Gliocephalotrichum simplex not only experienced better survival from irradiation, but also showed improvement in spleen parameters, reduced oxidative stress in the liver, and reduced production of inflammatory cytokines [44]. The authors suggested that a key mechanism of melanin’s protective property in the study was its ability to reverse the decrease in phosphorylation of the transducing protein ERK that is commonly seen upon radiation exposure [44]. Radioprotective technologies are needed for the protection of multiple vulnerable demographics. For example, radiation can have a harmful effect on patients receiving it for diagnostic or therapeutic purposes [42]. Cardiac diagnostic procedures alone account for about one-fifth of the radiation exposure per person per year in the US [45]. In addition, some occupations receive high levels of radiation exposure, including healthcare professionals [45] and military personnel [46].
Fungal melanin has also been implicated to have potential use in the functional biointerfaces used for stem cell manipulation [47]. Eumelanins were proposed for this purpose due to their antioxidant and electrical properties. However, eumelanin can be vulnerable to degradation from alkaline or oxidative stress. Manini et al. propose the alternative use of fungal allomelanins, citing the material’s resistance to degradation and smoothness [47]. Such a mycomelanin film was able to encourage the differentiation of stem cells towards an endodermal lineage [47].

Melanized fungi and fungal melanin have both been proposed as mechanisms for removing various toxins from a polluted environment. Fungi can degrade volatile organic compounds (VOCs), and the ability of melanotic fungi to survive acidic or dry conditions makes them great candidates for VOC absorption [48]. In western countries where individuals spend much of their time indoors, VOCs emitted from construction materials, appliances, and cleaning chemicals have been implicated as a cause of sick building syndrome (SBS) by the United States Environmental Protection Agency (EPA) [49]. Researchers found that melanized fungal cultures placed in an indoor air model were able to reduce the VOC content by more than 96% after 48 h [50]. However, researchers noted that which melanotic fungal species were used was an important factor for the feasibility of using fungi to eliminate VOCs in indoor spaces [50]. For example, some species produced putative volatile metabolites in low concentrations [50]. In addition, fungal species prone to rapid growth and/or sporulation may become prone to aerosolization, presenting challenges both as an allergen and as a pathogen to immunocompromised individuals [50]. The researchers ultimately concluded that slow-growing melanotic fungi may be optimal for future applications [50].