Digital Twin (DT) refers to the virtual copy or model of any physical entity (physical twin) both of which are interconnected via exchange of data in real time. Conceptually, a DT mimics the state of its physical twin in real time and vice versa. Application of DT includes real-time monitoring, designing/planning, optimization, maintenance, remote access, etc. Its implementation is expected to grow exponentially in the coming decades. The advent of Industry 4.0 has brought complex industrial systems that are more autonomous, smart, and highly interconnected. These systems generate considerable amounts of data useful for several applications such as improving performance, predictive maintenance, training, etc. A sudden influx in the number of publications related to ‘Digital Twin’ has led to confusion between different terminologies related to the digitalization of industries. Another problem that has arisen due to the growing popularity of DT is a lack of consensus on the description of DT as well as so many different types of DT, which adds to the confusion. This paper intends to consolidate the different types of DT and different definitions of DT throughout the literature for easy identification of DT from the rest of the complimentary terms such as ‘product avatar’, ‘digital thread’, ‘digital model’, and ‘digital shadow’. The paper looks at the concept of DT since its inception to its predicted future to realize the value it can bring to certain sectors. Understanding the characteristics and types of DT while weighing its pros and cons is essential for any researcher, business, or sector before investing in the technology.

In the era of Industry 4.0, when several industries are experiencing a digital transformation, Digital Twin (DT) is considered no less than a linchpin for gaining a competitive and economic advantage over competitors. DT saw its origins in the aerospace industry, and it is expected to revolutionize other industries [1]. The main applications of DT in different sectors are designing/planning, optimization, maintenance, safety, decision making, remote access, and training, among others. It can be a great tool for companies to increase their competitiveness, productivity, and efficiency [2]. DT has the ability to link physical and virtual worlds in real time, which provides more a realistic and holistic measurement of unforeseen and unpredictable scenarios [3].
The value DT brings to any sector, by reducing time to market, optimizing operations, reducing maintenance cost, increasing user engagement, and fusing information technologies, is indisputable [4]. The global market of DT was estimated at USD 3.1 billion in 2020 [5] and is expected to grow exponentially in succeeding years. The outbreak of the COVID-19 pandemic has changed the way production and maintenance are looked at, which has accelerated the adoption of Digital Twins [6]. Thus, it becomes essential to understand what the implications of DT implementations could or should be, depending on the nature of the industry where it is adopted.
This paper provides a detailed account of different types of DT and their characteristics. In literature, DT is often described and reviewed within a manufacturing context [2][7][8][9][10][11][12][13][14], whereas this review looks at DT as a technology beyond just manufacturing as well as consolidates different types of DTs at one place, which has not been reported before. This work aims to provide an overview of the current state-of-the-art of DT as well as a classification system of what is to be considered DT based on key required functionalities. The paper intends to analyze the role and advantages of DT and how can it bring value to the existing systems. Academia defines DT in several different ways depending on their field of research; therefore, this paper will also look at the origin and different definitions of DT throughout the literature to create a clearer picture of what can be referred to as DT and what should not be. The paper proposes a consolidated definition of DT that can be used irrespective of any industry and its application.

Even though DT technology has gained massive popularity in the past couple of years, the concept is not entirely new. Its concept came into being in relation to Product Lifecycle Management (PLM) in 2002 at the University of Michigan by Michael Grieves [15]. The proposed model has three components: real space, virtual space, and linking mechanism for the flow of data/information between the two; the model was then referred to as ‘Mirrored Spaces Model’ [16]. A similar concept in which software models mimic reality from information input from the physical world was imagined by David Gelernter in 1991 and was called ‘Mirror Worlds’ [17]. In 2003, Kary Främling et al. also proposed “an agent-based architecture where each product item has a corresponding ‘virtual counterpart’ or agent associated with it” as a solution to the inefficiency of transfer of production information via paper for PLM [18]. By 2006, the name of the conceptual model proposed by Grieves was changed from ‘Mirrored Spaces Model’ to ‘Information Mirroring Model’ [15][19]. The model put emphasis on the linking mechanism between two spaces being bidirectional and having multiple virtual spaces for a single real space where alternate ideas or designs can be explored (Figure 1). Due to the limitations of the technologies, such as low computing power, low or no connectivity of devices with the internet, data storage and management, underdeveloped machine algorithms, etc., DT had no practical applications at the time.

Figure 1. Mirrored Spaces Model/Information Mirroring Model as proposed by Michael W. Grieves. (Adapted from [16][19].)
The name ‘Digital Twin’ (DT) first appears in NASA’s draft version of the technological roadmap in 2010 [20]. In the NASA roadmaps, DT was also referred to as ‘Virtual Digital Fleet Leader’. NASA was the first association to forge the definition of DT; it was described as “an integrated multi-physics, multi-scale, probabilistic simulation of a vehicle or system that uses the best available physical models, sensor updates, fleet history, etc., to mirror the life of its flying twin”. Even though the first mention of DT is in the 2010 roadmap, NASA had used a similar concept before for the Apollo program, where two identical space vehicles were built to mirror each other [21][22]. Soon, the US Air Force followed the footsteps of NASA and used DT technology for the design, maintenance, and prediction of their aircraft [23][24][25]. The idea was to use DT to simulate physical and mechanical properties of the aircraft to forecast any fatigue or cracks in the structure, thus prolonging the remaining useful life of the aircraft. E. Tuegel [23] and B. T. Gockel et al. [25] in their papers defined DT only for the aircraft and called it ‘Airframe Digital Twin’ or ADT, which was a computational model to manage the aircraft over its entire lifecycle. Besides monitoring, DT was also proposed for sustainable space exploration as well as for future generations of aerospace vehicles [26]. The timeline of the evolution of DT can be seen in Figure 2.

Since the first introduction of DT, its popularity has increased as more and more researchers started focusing their research on DT. Figure 3 shows the exponential growth of the number of publications found on Scopus as well as ScienceDirect (limited to the English language) that contain the term ‘Digital Twin’ in the article title, abstract, or as keywords from 2011 to 2020. The increase in the publications is quite recent, i.e., 2016 onwards, as it can be clearly seen in Figure 3. 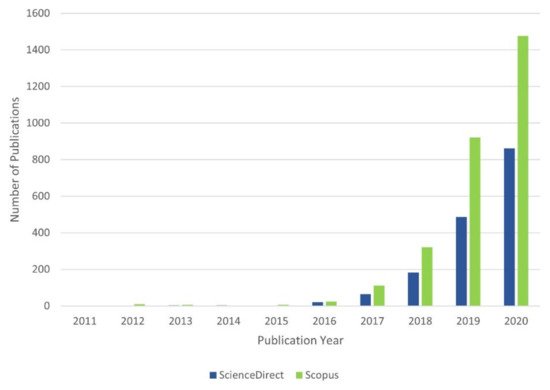 Figure 3. Number of Digital Twin-related publications by year from 2011 to 2020 on Scopus and ScienceDirect.
The growing popularity of DT can also be observed as it has been considered as a strategic technology trend for three consecutive years (2017–2019) by Gartner [27][28][29], future technology in the field of aerospace and defense by Lockheed Martin [30], and one of the defining technology of next decade by Forbes [31]. According to Juniper Research, by 2021, the global DT market was expected to be USD 12.7 billion [32]. The global DT market share, previously dominated by early adopters of the technology i.e., North America and Europe (>50%), is expected to expand in the Asia Pacific at a compound annual growth rate of 40.0% over the next 5 years [33].
As the DT market is growing exponentially, every sector or business wants to invest in the technology. However, to leverage the DT technology for any sector, it is important to understand the value it can bring to the business. It is also beneficial to understand the different characteristics and types of DT in order to choose the correct type of DT that can complement the business and can provide maximum profits.