With the aim to study the effect of melatonin treatment of pomegranate trees on crop yield and fruit quality at harvest and during storage, two experiments were carried out in two consecutive years: 2017 and 2018. In the first year, trees were treated with melatonin (at 0.1 and 1 mM) along the developmental growth cycle and fruit quality parameters were evaluated at harvest and during storage at 10 °C for 90 days. Treatments with melatonin led to an increase of crop yield (number of fruits per tree and kg per tree), as well as higher fruit quality attributes, such as fruit size (diameter and weight), color, total soluble solids (TSS), and total acidity (TA), especially with the 0.1 mM dose. Then, in the second year, melatonin at 0.1 mM was selected for repeating the pre-harvest treatments with similar results in terms of crop yield and fruit quality parameters. During storage, pomegranate fruit treated with 0.1 mM melatonin maintained higher quality attributes than controls, such as TSS, TA, and firmness and lower weight losses were observed in fruit from treated trees, in both trials. In addition, the content of the major sugars (glucose and fructose) and organic acids (malic, succinic and ascorbic acid) were higher in melatonin-treated than in non-treated fruit. These results suggest that pre-harvest melatonin treatment could be a useful tool to increase pomegranate crop yield as well as fruit quality parameters at harvest and their maintenance during storage due to an effect of melatonin on reducing the postharvest ripening process.

Melatonin (N-acetyl-5-methoxytryptamine) is a natural-occurring compound derivative of tryptamine, and plays important roles in plant growth, such as delay of senescence process and increased tolerance to both biotic and abiotic stress [1]. These effects have been attributed to the melatonin action as a natural antioxidant molecule scavenging free radicals either in vitro as in vivo studies using different vascular plants [2]. The melatonin content in edible fruit has been associated with health-benefits, since high levels of this compound in foods are beneficial for consumers. Thus, the consumption of a Jerte Valley cherry product enhances mood and increases 5-hydroxyindoleacetic acid but reduces cortisol levels in urine, which may protect against stress and act as a mood enhancer by increasing serotonin availability in the organism, particularly with advancing age [3].
As postharvest treatments, melatonin delayed physiological deterioration of cassava roots and reduced the accumulation of H2O2 while increasing the activity of antioxidant enzymes, and thus maintaining homeostasis of cellular reactive oxygen species (ROS) through increasing the endogenous melatonin levels [4]. In tomato fruit, postharvest treatment with melatonin at 50 µM stimulated the content of anthocyanins, and might be positively related to fruit ripening but negatively related to fruit senescence, since the proteins related with senescence were downregulated while an increase of catalase and peroxidase was observed in treated fruit [5]. In peaches, postharvest application of melatonin at 0.1 mM reduced weight loss, decay incidence, and respiration rate as well as maintained firmness, total soluble solids and ascorbic acid contents during seven days of storage at 25–28 °C, with a concomitant increase in antioxidant enzymes and maintenance of membrane integrity, which might be a part of the mechanism implicated on delaying senescence in peach fruit [6].
As pre-harvest treatment, very little evidence exists about the role of melatonin on fruit growth and ripening, and different effects have been reported depending on fruit species, concentration, or time of application. Thus, melatonin was naturally found in grape tissues (skin, flesh and seed), and, during ripening, melatonin content decreased in skin, while it increased in both seed and flesh tissues [7]. Melatonin at 100 mg L−1 (0.43 mM), applied once or twice to grapevines at pre-veraison stage, significantly increased (6.6%) the grape berry size, which was correlated with increased concentration of endogenous melatonin [8]. In two cherry cultivars (‘Hondeng’ and ‘Rainier’), melatonin was evaluated during the growth cycle, and a maximum peak at stage 2 was found, which coincided with endocarp lignification in both cherry cultivars [9] and in ‘Prime Giant’ sweet cherry, melatonin 0.1 and 0.01 mM applied at pit hardening inhibited fruit ripening [10]. However, irrigation of tomato plants with 0.1 mM melatonin increased sugar and lycopene concentration in fruits, showing a positive effect on fruit ripening [11], while, in apricots, foliar spray melatonin treatment increased yield and fruit weight, although no effect on on-tree ripening was observed [12].
Pomegranate is one of the oldest known edible fruits which has gained popularity and scientific interest in the last several years due to its nutritional value and health benefits, since it is very rich in bioactive compounds with antioxidant activity [13][14]. The quality parameters for pomegranate are based on external attributes such as size, shape, and color of the skin, as well as on internal ones such as aril color, sugar and acid content, and the presence of small and soft seeds [15][16]. The color of the pomegranate increases in both skin and arils during ripening, due to the accumulation of anthocyanins, the major in the sweet varieties being cyanidin 3-glucoside, followed by delphinidin 3,5-diglucoside and pelargonidin 3-glucoside, as well as sugar content, while decreases occur on acid content and fruit firmness [16][17][18][19]. However, during postharvest storage, pomegranate exhibits important quality losses due to several physiological and enzymatic disorders, the major ones being weight loss, together with loss of firmness, aril color, and acidity, which lead to a reduction of consumers’ acceptability in terms of freshness, juiciness, and taste [15][16][19][20][21].

Fruit diameter was recorded during on-tree fruit growth and ripening and results are shown in Figure 1, in which a simple-sigmoid growth curve from full blossom (FB) to harvest (155 d after full blossom, DAFB) can be observed. In addition, results showed that melatonin treatment at 0.1 mM concentration stimulated fruit growth from the second application (T2), leading to pomegranates with significantly higher size (p < 0.05) in 0.1 mM melatonin-treated trees (≈84 mm) than in 1 mM or control ones (≈79 and 77 mm, respectively) at the first harvest date. The increase of fruit size as a consequence of 0.1 mM melatonin treatment was not due to an increased peel width but to an increase in the portion of the arils, as can be observed in the photograph of cut pomegranate fruit detailed below. 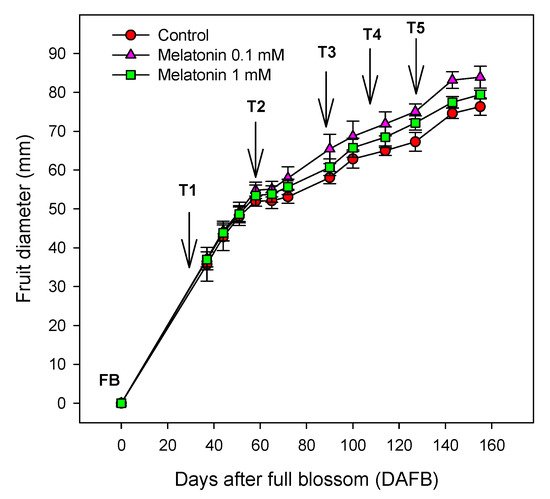 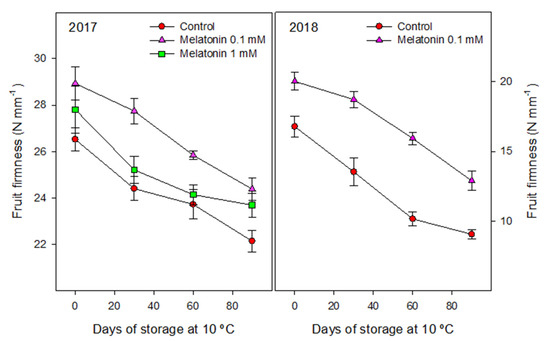 Figure 2. Fruit firmness evolution (Nmm−1) during refrigerated storage in two consecutive production cycles (2017 and 2018), in control fruit and 0.1 or 1mM melatonin-treated trees. Data are the mean ± SE.
Similar results with respect to firmness (Figure 2), weight loss, TSS, TA, and RI were obtained in the experiment assayed in 2018 (Table 4), in which 0.1 mM melatonin concentration was chosen, since better results were obtained compared with 1 mM dose in the 2017 experiment. Accordingly, melatonin treatments did not affect skin color, although aril color was affected by treatment, since Hue angle values were significantly lower in melatonin treated than in control fruit, either at harvest or during storage (Table 4), which indicated a darker red color of the arils. These differences are evident in Figure 3, in which the visual aspect of pomegranates from control and melatonin-treated trees (0.1 mM) at harvest and during storage is shown. Small shrivelling symptoms were observed on pomegranate fruit after 90 days of storage in fruits from control and treated ones without differences attributed to melatonin treatment (data not shown). 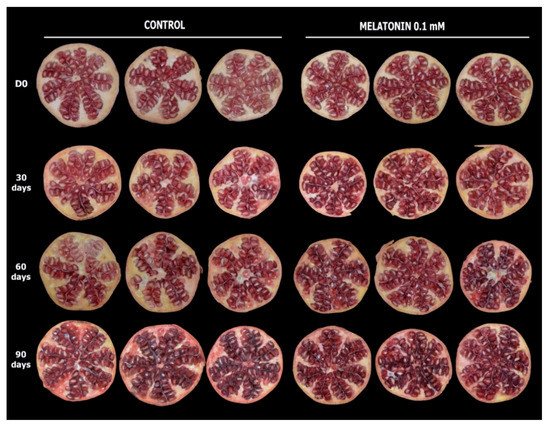 As far as we know, this is the first report showing the effects of melatonin, applied as pre-harvest treatment, in pomegranate yield and fruit quality properties, although some evidence exists in other plant species. In a recent study performed on Arabidopsis treated with melatonin and grown at 4 °C, melatonin-treated plants had significantly greater fresh weight, primary root length, and shoot height compared with untreated plants, the effect being both time and concentration dependence [22]. However, the yield increase found in the present study was higher with 0.1 mM melatonin treatment than with 1 mM dose, and due to an increase in fruit size (diameter and weight). This effect was due to an increased aril portion but to an increase in peel width as can be observed in the photograph of cut pomegranates in Figure 3. On the other hand, the amount of fruit harvested by tree was also increased by melatonin treatment. Given the fact that treatments were applied when fruit was in its active phase of growth, the higher amount of fruit harvested from treated fruit could be attributed to the effect of melatonin on decreasing the normal fruit abscission that occurs during fruit development due to environmental factors, such as wind or rain. In addition, the effect of melatonin on alleviating biotic and abiotic stress in plants has been reported [22][23]. Thus, giving the semi-arid climate conditions of Southern Spain, the melatonin treatment could increase net photosynthesis rate and productivity throughout enhancement of tree tolerance to heat and drought stresses. Accordingly, grape berries treated with melatonin at pre-veraison exhibited higher endogenous melatonin accumulation and increased berry size and weight [8]. These authors attributed this effect to an increase of the sink strength of the berry, leading the fruit to uptake more sugars and develop a larger size at harvest. On the other hand, melatonin foliar spray treatment increased fruit weight and yield for ‘Canino’ apricot [12]. In addition, we have found increased crop yield ‘Colorado’ and ‘Mikado’ apricot cultivars after melatonin treatment (unpublished data), which were attributed to increases in tree net photosynthesis, due to enhanced total chlorophyll and leaf area.
‘Mollar de Elche’ pomegranate is very much appreciated by consumers due to the high content of sugars and low acidity, which confer a sweet taste while also being very aromatic [15][16][17][18]. In this sense, the higher values of TSS, TA, sugars, and organic acids found at harvest in pomegranates of melatonin treated trees show that they had higher quality attributes than controls. However, this cultivar is characterized by having a pale aril color compared with other cultivars [15][17][24] and thus several research papers have been performed with the aim to increase aril color while enhancing anthocyanin synthesis, by applying water restrictions in summer, during the linear phase of fruit growth [25], as well as treatment with methyl jasmonate or salicylates during on-tree pomegranate fruit development [16][26]. Results of the present research show that melatonin-treated fruit had a deeper red color than controls (lower Hue angle) at harvest and during storage, showing a stimulation of the anthocyanin biosynthesis by melatonin treatment, which is the pigment contributing to the red color of pomegranates [15][16][20][26]. On the other hand, no effects of melatonin treatments on fruit taste and flavour were appreciated either at harvest or during storage, although a proper sensorial analysis would be useful to a scientific validation of this observation.
On the other hand, results show that pre-harvest melatonin treatment delayed the postharvest ripening process during storage, since weight, firmness, and acidity losses were delayed in fruit from melatonin-treated trees with respect to controls, these effects being higher for 0.1 mM dose than for 1 mM. No previous reports are available in the literature regarding the effect of preharvest melatonin treatment on the evolution of fruit quality parameters during storage, although information exists about postharvest treatments. Thus, in banana, exogenous application of melatonin (at 0.05, 0.2 and 0.5 mM) resulted in a delay of postharvest ripening, although in this report the effect was dose dependent [27]. The lower weight losses observed in fruits from melatonin treated trees with respect to those of controls might be attributed to an effect of melatonin on increasing cuticle thickness, as recently proposed for nectarines [28] and mangos [29] after postharvest melatonin treatment. Accordingly, postharvest 0.1 mM melatonin treatment delayed the postharvest ripening process during cold storage in apples [30], peaches [31], nectarines [28], pears [32], and mangos [33], which was attributed to a inhibition of ethylene production, although similar effects have been reported in non-climacteric fruits such as sweet cherries [34].