Plants are immobile; they cannot escape from biotic, (i.e., pathogens, parasites, grazing) and abiotic (such as drought, flooding, salinity, low-high temperatures, ultraviolet radiation, nutrient deficiency, heavy metal (HM) toxicity) stresses. Plant growth, development and productivity are influenced by a variety of environmental stresses. These stresses often perturb the homeostasis and ion distribution in plant cells and induces osmotic stress, leading to an enhancement in the accumulation of reactive oxygen species (ROS) [1]. The production and accumulation of ROS in the plants result in severe destruction of cell organelles and functions cause membrane peroxidation, leading to damage in the cell membrane, degradation of biological macromolecules and ultimately cell death. The ability of plants to scavenge the toxic effects of ROS seems to be the most important determinant for their tolerance to different stresses. Antioxidants are the first line of defence against the damages caused by free radicals and are critical for the optimum health of plant cells [2][3][4][5]. Plant antioxidants play a significant role in assisting plant development through a wide variety of mechanisms and functions.

There are several antioxidant enzymes associated with ROS scavenging in plants, and the synthesis of these enzymes is known to be enhanced during the exposure to oxidative stresses [6]. The ROS comprise free radicals, such as superoxide radicals (•O2−), hydroxyl radicals (•OH), perhydroxyl radicals (HO2−) and alkoxy radicals, and non-radical forms, i.e., hydrogen peroxide (H2O2) and singlet oxygen (1O2), present in the intra- and extra-cellular locations of the plant. Superoxide radicals (•O2−) can be generated by a single electron transfer (e−) to dioxygen (O2).

Evolution has equipped plants with a wide range of defence measures, which include various enzymatic strategies to scavenge free ROS in plant cells [9][10]. The tolerance mechanisms in stressed plant include a number of physio-biochemical strategies, which includes many enzymatic components, such as superoxide dismutase (SOD), catalase (CAT), peroxidases (POX), glutathione peroxidase (GPX), glutathione reductase (GR), glutathione S-transferases (GST), ascorbate peroxidase (APX), monodehydroascorbate reductase (MDHAR) and dehydroascorbate reductase (DHAR), and non-enzymatic components, such as ascorbic acid (AA), glutathione (GSH), phenolic compounds, alkaloids, flavonoids, carotenoids, free amino acids and α-tocopherols [11][12][13]. However, in the present review, we have exclusively focussed on the role and mechanisms of enzymatic components in the plant to scavenge the ROS and to cope with the stress conditions. These enzymes are selected on the basis of majority of the research reports available and with their proven utility in transgenic plants to cope with the stress conditions (Table 1). During stresses, SOD catalyses the removal of •O2− by dismutating it into O2 and H2O2, CAT converts the H2O2 into water and molecular oxygen (O2) and POX works in the extra-cellular space for scavenging H2O2. Plant GPX catalyses the reduction of H2O2 and HO2 to water and lipid alcohols, respectively, using thioredoxin as an electron donor. Glutathione reductase catalyses the reduction of oxidised glutathione (GSSG; dimeric) to reduced glutathione (GSH; monomeric) and APX utilises ascorbate as specific electron donor to scavenge H2O2 to water.

These enzymes not only protect various components of the cells from damages, but also play an important role in plant growth and development by modulating cellular–sub-cellular processes such as mitosis [14], cell elongation [15], senescence [16] and cell death [17], and are also involved in a wide range of processes, such as cell differentiation [18], cell growth/division [19], regulation of senescence and sulphate transport [20][21], detoxification of xenobiotics [22], conjugation of metabolites [23], regulation of enzymatic activities [24], synthesis of proteins and nucleotides [25][26], phytochelatins [27] and expression of stress responsive genes [28]. The antioxidant defence system protects the unsaturated membrane lipids, nucleic acids, enzymes and other cellular structures from the negative impacts of free radicals [29]. Therefore, the antioxidant defence system of plants has been attracting considerable interest of the scientific community [29][30].

The antioxidant defence system in the plant comprises several different enzymes. They are mainly involved in either preventing the Haber-Weiss reaction (Figure 1) or the Foyer–Halliwell–Asada pathway, which reduces the H2O2 and utilises the reducing potential of NADPH. 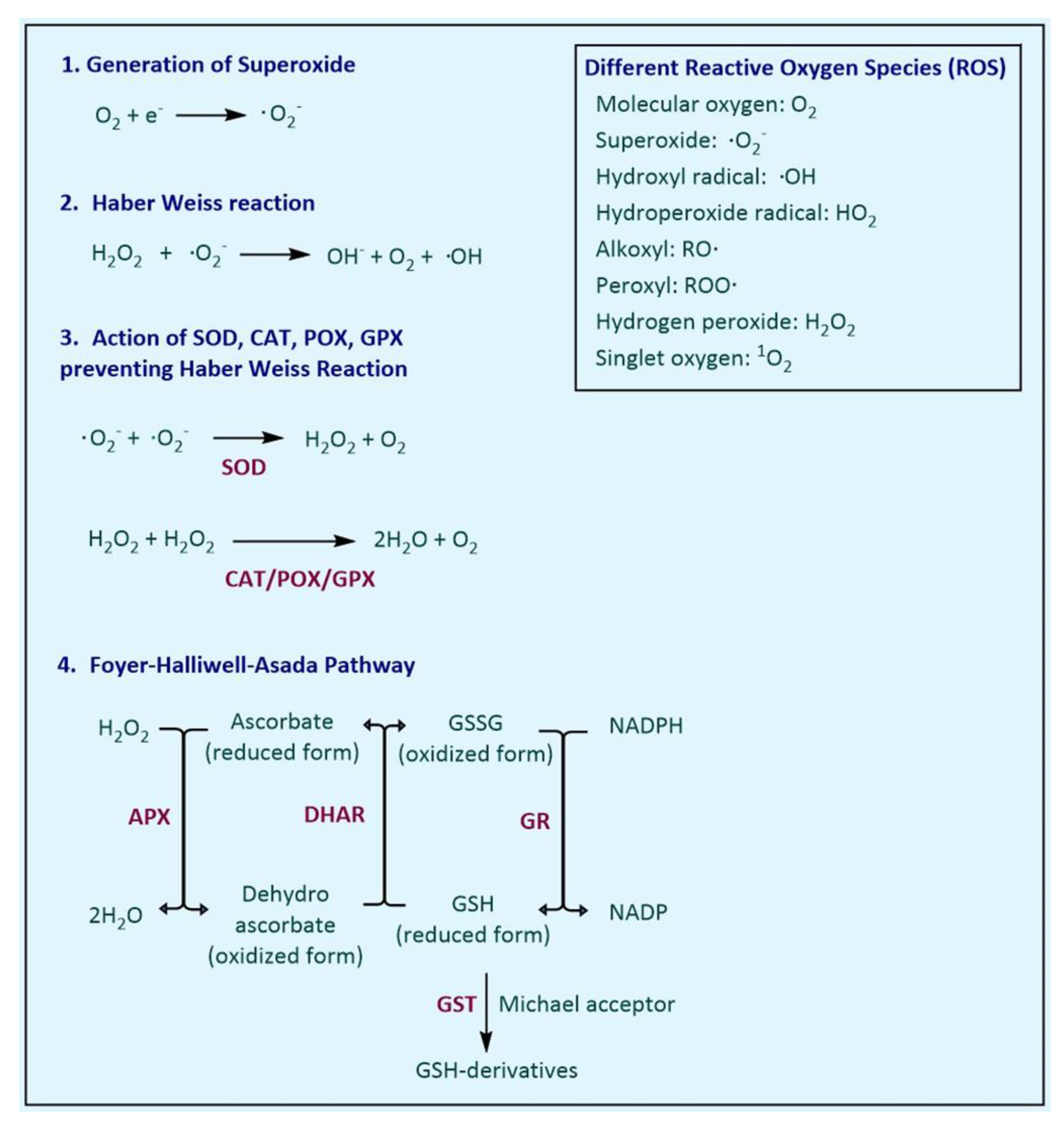 Sustainable agriculture production is a key factor in ensuring global food security. However, there are multiple stress conditions that influences the crop growth and yield. In order to overcome these stress conditions, developing stress-tolerant plants is an important step. Understanding the role of individual gene under the influence of different stress condition can be useful in developing stress-tolerant plants. The overexpression of different genes of different antioxidant enzymes has resulted in the increase in tolerance in transgenic plants to various environmental stress conditions. Several stress-tolerant genetically engineered plants have been developed in the recent past, and the significant findings of these research reports are briefly described in Table 1. The majority of these studies focussed on abiotic stress caused due to salinity, heat, chilling, drought, flood and HM, but very few reports are available on understanding the role of these enzymes to cope with biotic stress. Furthermore, in all of these studies, the gene of the antioxidant enzyme is overexpressed under a strong promoter in transgenic lines, thereby increasing the tolerance potential of the plant to stress condition. Thus, these findings are crucial for developing stress-resistant plants, and the knowledge gained will be helpful for sustained growth and productivity of various crops in variable environmental conditions.