The first guidelines on contrast-enhanced ultrasound (CEUS) date back to 2004 [1] and focused on hepatic disease, whereas non-hepatic applications were taken into account in 2008 [2]. The dramatic increase in non-hepatic applications for CEUS made it necessary to release dedicated guidelines in 2011 [3][4]. Ultrasound modes have been used as the first imaging method both for the native and transplanted kidneys, in patients with normal and with impaired renal function [5][6][7]. However, it is known that the use of B-mode and Doppler ultrasound alone represents a limitation in the study of kidney diseases, while the addition of contrast medium allows the display of vascular abnormalities unappreciated with conventional modes. CEUS of the kidney is off-label in Europe, but widely used for its effectiveness and safety, and recommended by European guidelines [3][4].

To perform a CEUS examination, it is necessary to have an ultrasound system equipped with microbubble-specific technology, capable of separating the signal coming from microbubbles (non-linear) from that of the stationary tissues (linear) [8]. To minimize artifacts and tissue signal, the lowest possible mechanical index is used, which depends on the type of equipment available. The contrast dosage ranges from 1.4 to 2.4 mL or less, depending on the ultrasound scanner, the patient’s habitus, and the depth of the lesion to be examined. All the CEUS images reported in this paper were obtained using an intravenous injection of 1.4–2.4 mL of microbubbles containing sulfur hexafluoride. The kidney is a remarkably vascularized organ, receiving approximately 21% of cardiac output. Segmental arteries branch from the main renal artery, and give rise to the lobar arteries, which in turn branch into the arciform and interlobar arteries. Then the contrast reaches the medullary circulation until reaching the pyramids (Figure 1) [3][4]. 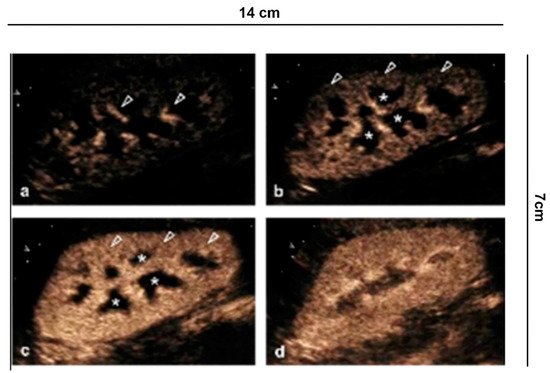 Figure 1. Renal vascularity with CEUS. (a) A few seconds after injection of the contrast medium, the microbubbles arrive in the arterial branches of the pedicle and in the branches of the interlobar artery (arrowhead). (b) After 15 s the cortical phase begins (arrowhead) without involving the medulla (asterisk). (c) After the completion of the cortical phase (arrowhead) comes the onset of the parenchymal phase (25 s–4 min) with progressive appearance of the enhancement of the external medulla (asterisk) and (d) subsequent involvement of the pyramids.
The vascular structures are rapidly represented, appreciating a fast enhancement of the renal parenchyma from the cortical surface to the portion of the cortico-medullary junction, best visible in the slow motion video. This is different in chronic renal insufficiency, where the enhancement is less intense and fades earlier.

3. Clinical Indications in the Native Kidney

There are numerous scenarios for which CEUS is indicated [1][3][4]. Microbubble injection often complements conventional ultrasound examination, but can also be considered as a second look examination in equivocal cases investigated with other imaging techniques (CECT and CEMRI).

The Bosniak classification has been the most widely adopted method to characterize cystic kidney lesions with good reliability regarding their nature [9]. The classification was first introduced for CECT, which is still considered the gold standard, with probability percentages of malignancy and benignity close to surgical ones [10][11]. The introduction of modern CT technologies did not significantly affect the performance of CECT for this task [12]. The Bosniak classification has been successfully applied also with CEUS, with a similar or better performance, compared to CECT [13][14]. Regardless of the technique used, the Bosniak classification system is intrinsically subjective, a problem well acknowledged since its introduction, which led to subsequent amendments of the scoring system [15]. A considerable effort to standardize the Bosniak scoring system and to improve interobserver agreement has been recently addressed by Silverman et al. for CECT and CEMRI, and by Cantisani et al. for CEUS [16][17]. Numerous aspects should be taken into account when complex renal cysts are scored in the US [16]. A multi-parametric approach is required. Scoring is not based on the size or shape of the cyst but only on the intra-cystic content, i.e., the presence or absence of septa, the number and the thickness of the septa, the wall thickness (more or less than 3 mm), and the presence of irregularities and of nodules.
As complexity increases, the probability of being a malignant cyst grows. In the new EFSUMB classification, cystic tumors are included in category IV, or rather, probable malignant cystic tumors, according to histology. Cystic tumors comprise a diverse group of kidney lesions and can have variable biological profiles. Clearly, the US only identifies the presence of liquid and solid components, and CEUS identifies possible vascularization, referring the definition to histology (Figure 2). 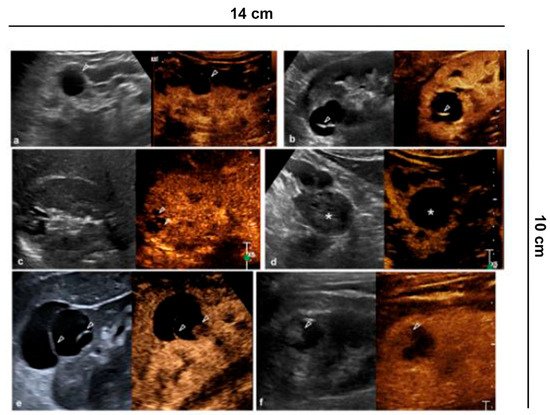 CEUS is recommended by the EFSUMB guidelines and by the American College of Radiology (ACR) to characterize incidental renal masses [3][4] Lesions with equivocal enhancement at CECT will be characterized as solid tumors or renal cysts with CEUS. Cysts are graded according to the Bosniak criteria [18] (Figure 3). 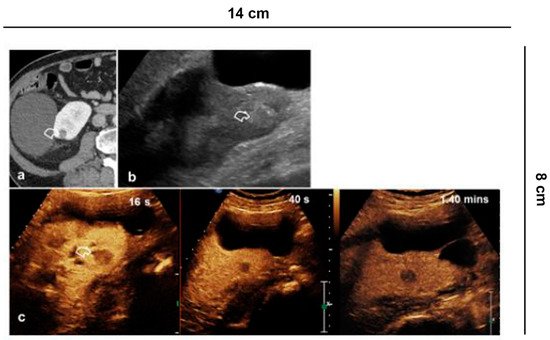 Figure 3. Indeterminate lesion. (a) 56-year-old man in follow-up for esophageal neoplasia. CECT acquired only in the portal phase. At the lower pole of the right kidney, there is a sharp-edged formation with equivocal enhancement (curved arrow); (b) B-mode US shows a hyperechoic solid lesion (curved arrow) which appears (c) hypovascularized in all vascular phases compared to the parenchyma on CEUS (curved arrow).

With the exception of angio-myolipomas with a visible amount of fat, differentiation of the different solid renal masses is problematic even at CECT and CEMRI. CEUS is limited for this task [19] and its use is not recommended by the EFSUMB guidelines for this purpose [3][4]. Several features, however, can help guess tumor histology at multiparametric US. Clear Cell Renal Cell Carcinoma (ccRCC) is usually hyper-vascular, with heterogeneous enhancement due to necrotic areas. However, differentiation from oncocytoma and lipid-poor angio-myolipomas remains problematic. Papillary Renal Cell Carcinoma (pRCC) is often hypo-vascular [20][21].

Anatomical variations can simulate a renal mass [22]. Among pseudo-tumors in particular, hypertrophy of the Bertin columns, persistence of fetal lobatures, and presence of humps can be confused with focal lesions requiring a CECT or CEMR study for characterization. CEUS is a valid alternative for a correct differential diagnosis [23][24][25]. In fact, pseudo-tumors will present the same enhancement characteristics as the renal parenchyma, without alterations of the vascular structures (Figure 4). In lesions iso-enhancing in all vascular phases, a situation that occurs in up to 5% of cases, differentiation from pseudo-masses is also possible combining grey-scale US and CEUS, since true lesions often present with different echogenicity, and pseudo-lesions usually display a medullary component which is later enhanced compared to cortex [24].

Figure 4. Differential diagnosis between solid renal masses and pseudo-tumors. (a) B-mode US shows a hyperechoic delimited area in the middle third of the left kidney as a possible solid lesion (curved arrows). (b) CEUS demonstrates, on the other hand, a normal cortical vascularization (arrowhead) with the intact medulla (asterisk) and with (c) the parenchymal phase preserved.

In accordance with the EAU guidelines [26], evaluation of ablative treatments of small kidney lesions requires a close monitoring of the ablated area, both to check for any complications and to assess the success of the procedure. CEUS has progressively taken a role in the follow-up, especially early after the procedure [27][28][29]. The treatment is considered successful if the lesion becomes completely avascular. This usually occurs early after radiofrequency and microwave ablation (Figure 5) [27][30], while it may take up to one month after cryoablation (Figure 6), requiring a tailored follow-up [28][29]. Therefore, an adequate knowledge of the type of ablative treatment allows a correct interpretation of the images, thus reducing the risk of misdiagnosis.

Figure 5. Follow up of microwave tumor ablation. (a) CECT shows a small renal lesion, partially exophytic, adjacent to a simple cyst, in the middle third of the left kidney; (b) Before the microwave treatment CEUS evidences a hyper-vascular, partially exophytic lesion (arrowheads); (c) After 12 h from the microwave ablation, CEUS shows an avascular area without recognizing the lesion (arrowheads), a sign of treatment success. 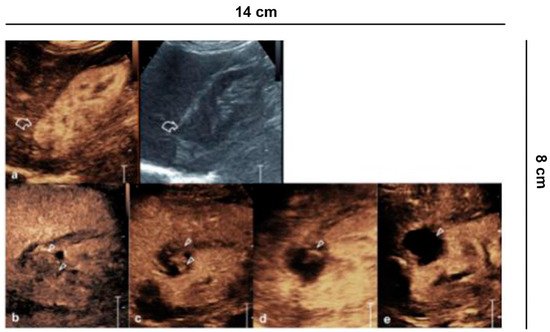 Figure 6. Ablative technique follow-up. (a) Before the cryo-ablative treatment, CEUS shows an iso-vascular, partially exophytic lesion at the upper pole of the right kidney (curved arrow). After treatment, CEUS shows diffuse and persistent intralesional vascularization (arrowheads) to 24 h (b); at 7 (c) and 14 days (d) there is a progressive reduction of vascularity; after one month (e) the lesion appears completely avascular, a sign of a successful treatment.

Pyelonephritis is a clinical diagnosis. Ultrasound is required to rule out obstructive causes. Other imaging such as CEUS or CECT are indicated in complicated pyelonephritis, or if clinical improvement is lacking at 72 h after medical treatment with antibiotics [31] (Figure 7). Ultrasound is not specific, and can be completely negative. Conversely, CEUS can visualize hypo-perfused areas of parenchyma up to true avascular, rounded areas, with possible peripheral rim, consistent with abscesses. Inflammatory areas are more visible in the parenchymal late phase [32]. In complicated pyelonephritis, CEUS can be used as a monitoring tool for therapeutic response.

Figure 7. Complicated pyelonephritis. 53 year-old-woman with left flank pain and fever. (a) B-mode US appreciates inhomogeneous, hypoechoic area (asterisk); (b) CEUS performed in the same session confirms the presence of an avascular lesion with a peripheral rim, consistent with abscess (asterisk); (c) Urographic phase CECT, performed for the clinical worsening of the patient, confirms the presence of abscess (asterisk) and hypo-perfused area (curved arrow) at the lower pole of the kidney.

Renal vascular disease can involve vascular structures at all levels; in the clinical suspicion of renal infarction B-mode and Color Doppler US (CDUS) is always required, although they have limitations. In fact, this only provides in real time the average speeds coded with the color on the area of interest. The vascular representation of the more distal arterial branches is not always adequate, especially in elderly and in nephropathic patients.
Renal infarction (often in triangular form) or only cortical ischemia (absence of cortical interlobular vessels) (Figure 8) [33][34] are recognizable on the other hand with CEUS, which is able to enhance the lack of vascularization, and therefore repair the damage. The sensitivity of CEUS is quite similar to that of angiography and CT [33]. 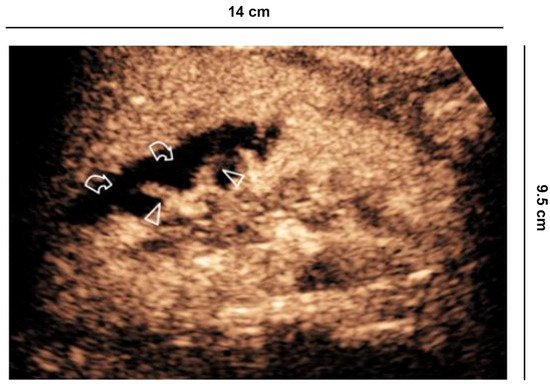 Figure 8. Vascular lesions. 56 years old man with atrial fibrillation shows creatinine elevation and right lower back pain. CEUS demonstrates focal acute cortical ischemia (curved arrow) and patent interlobar vessels (arrowheads).
CEUS is increasingly being used for evaluation of organ perfusion and lesion characterization, as advocated by the EFSUMB guidelines. Specifically, the guidelines recommend CEUS for differentiating cortical necrosis from renal infarction. Real-time dynamic CEUS depicts microcirculation throughout the kidney and should therefore identify the reverse rim sign to diagnose acute cortical necrosis. The excellent spatial resolution of CEUS allows clear differentiation between renal infarction and cortical necrosis, which appears as non-enhancing cortical areas, and preserved hilar vascularity [34] between hypo-perfused and non-perfused areas is clear following ultrasound contrast agent administration.
CT remains the gold standard for the study of kidney trauma due to its panoramic view and its greater sensitivity compared to ultrasound. Thanks to its exclusively vascular nature, CEUS increases the sensitivity of US for the detection of traumatic lesions [35] allowing the study of all the vascular phases (arterial, venous and parenchymal) in real time, but above all it is useful in the follow-up in cases of conservative therapy (Figure 9) [36]. 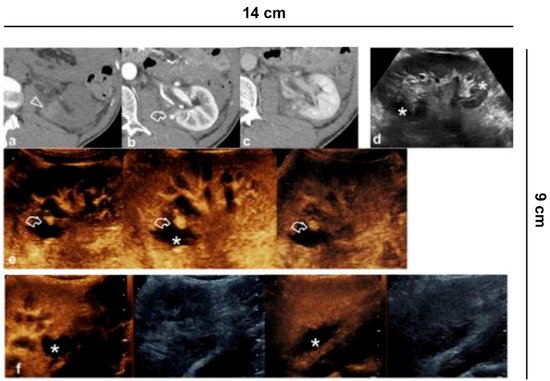 Figure 9. Vascular lesions. 35-year-old male patient with abdominal trauma treated conservatively. (a) CT without contrast medium shows parenchymal hyper-density from recent hematoma (arrowhead) at the lower pole of the left kidney; (b) A pseudoaneurysm (curved arrow) is recognized in the arterial phase, while in the (c) nephrographic phase the parenchymal contusion is more clearly recognized and the pseudoaneurysm is less visible; (d) B-mode US shows inhomogeneous echogenic areas (asterisks) corresponding to the contusions; (e) CEUS adequately shows all the vascular phases of the pseudoaneurysm (curved arrow) and the perirenal hematoma (asterisk); (f) Follow-up performed on 7th day.
In addition, active bleeding can be recognized with some extravasated contrast medium bubbles and pseudoaneurysms can be detected. It should be remembered that the excretory system cannot be studied with CEUS and therefore when damage to the excretory tract is suspected, CT is mandatory.