The receptors are characterized by radial symmetry and have pentameric organization, with five subunits arranged radially around a central ion-conducting pore. There are 17 subunits described in vertebrates: α1 to α10, β1 to β4, γ, δ, and ε. α5 and β3 subunits are considered auxiliary subunits, not contributing to the ACh binding site but influencing properties of the receptor [1][2]. α1, β1, δ, ε, and γ are subunits within muscle-type of nAChR, with ε subunits present in adult receptor type, while γ subunit present in fetal receptor.

The receptor structure was studied at an atomic level. The quest for receptor structure determination was facilitated through studies on acetylcholine-binding protein (AChBP), a soluble multimeric protein secreted by snail glial cells which buffers ACh concentration [4].

nAChRs are widely distributed within the central nervous system (CNS) and peripheral nervous system, as well as outside the nervous system. The most prevalent receptor subtype within the brain is the α4β2-containing receptor, the upregulation of which is observed following chronic nicotine consumption [5]. Existing in two stoichiometric forms ((α4)2(β2)3 and (α4)3(β2)2), α4β2-containing receptors can vary in their sensitivities to ACh [6]. They play critical role within reward pathways, in particular, within nigrostriatal dopaminergic circuitry [7].

Thus, knowledge about the functionality of the receptors is of paramount importance. Ligands targeting the receptors can help decipher physiological mechanisms, as well as prevent pathological processes where receptors are involved [9][10]. Natural products and, in particular, venoms of venomous animals, such as snails, snakes, spiders, and scorpions, contain biologically active compounds targeting nAChRs; thus, they are actively and thoroughly investigated [11].

2. Snail Venoms as a Source of Toxins Acting on Acetylcholine Receptors

Predatory snails within the Conus genus produce peptides— conotoxins that target different ion channels [12]. The peptides with a general structure CC-Xm-C-Xn-C, where C represent cysteines, Xm and Xn—variable number of residues between cysteines—constitute the family of α-conotoxins (α-Ctx). Structurally, α-conotoxins have very rigid three-dimensional structure due to the restraints imposed by disulfide bonds.

α3/5 conotoxins predominantly target muscle subtypes of nAChRs [13]. α-Conotoxins MI, GI, and SIA have been shown to exhibit >10,000-fold selectivity for α/δ over the α/γ site in mammalian receptors. However, the reverse pattern is observed in Torpedo receptors. Conserved Pro 6 and Tyr 12 residues are critical for hydrophobic interaction between the δ subunit and MI [14].

Ac1.1a and Ac1.1b are almost identical α3/5 conotoxins differing in only one residue at position 14 [15] (Figure 1). They exhibit selectivity towards α/δ over α/γ site. The first three residues before the Cys 4 have been shown to lack an effect on binding the target. 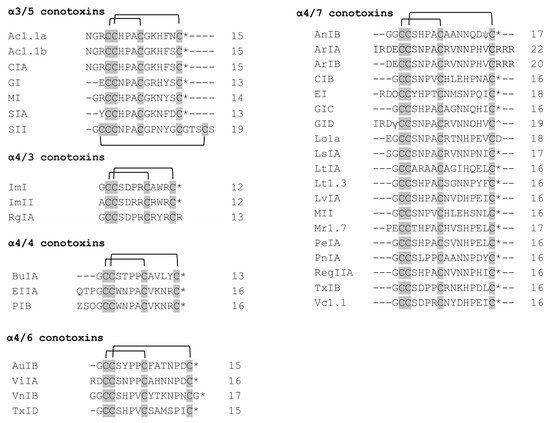 Figure 1. The α-conotoxins with 3/5, 4/4, 4/6, and 4/7 spacing. The cysteines residues are shaded in gray and intrachain disulfide bonds are shown. The number of residues in each toxin is given to the right. * C—terminal carboxamide, ^ C—terminal carboxylate, ψ—sulfated tyrosine, O—hydroxyproline, Z—pyroglutamate.

NMR structures for both CIA and CIB alpha-conotoxins derived from Conus catus have been studied. α-Conotoxin CIA caused muscle paralysis in fish when tested in vivo [19], while 4/7 α-Conotoxin CIB blocked neuronal type nAChRs.

Overall, there are two conserved regions (residues 2 and 3 in the first cysteine loop, as well as residues 1, 2, and 4 in the second cysteine loop) inherent to α3/5 conotoxins (Figure 1), which include important residues for the binding to muscle-type nAChR. (1) it has Pro residue in place of expected Arg/Lys; (2) it has a long C-terminus. Structure–functional studies on SII are very scarce, except for one that characterized SII as possessing three disulfide bonds and no net positive charge [20].

Despite the fact that ImI and ImII conotoxins share a high sequence homology (9 of 12 amino acids are identical) (Figure 1), they were found to target different sites at the α7 nAChR, since only ImI (and not ImII) showed competitive inhibition of the receptor when α-bungarotoxin (α-Bgtx) was co-added [22]. Mutational studies revealed that the amino acid residue at position 6 (Pro in α-Ctx ImI, Arg in α-Ctx ImII) determines the selectivity for a specific site, whereas the amino acid residue in position 9 (Ala in α-Ctx ImI, Arg in α-Ctx ImII) confers each of the toxins its optimal affinity to bind to their corresponding sites at the α7 nAChR [22].

The selectivity and potency of α-conotoxin RgIA for the α9α10 subtype of nAChR is conferred by Arg 9 and Arg 13 residues [23]. It is also interesting to note that [24][6]-dicarba RgIA is able to act specifically at α9α10 nAChRs, losing its effect on N-type calcium channels [25]. This analogue could potentially be used in a clinical trial for eliciting an effect on a single receptor subtype.

It should be noted that α-conotoxin BuIA on nAChRs with β4 subunits have slow off-time when compared to corresponding nAChRs with β2 subunits [26]. This implies that BuIA can discriminate between different β subunits based on the time needed to unblock the receptor.

It is interesting to note that, though α-conotoxins EIIA and PIB come from different Conus species, they are almost identical in sequence, except for one residue at the second position. Therefore, it is not surprising that they both have selectivity for muscle-type Pro 5, Ala 6, and Lys 9 residues located in the first and second loops, respectively, which were previously found to be critical for the muscle nAChR selectivity of α3/5 conotoxins [29].

Alanine scanning mutagenesis revealed three residues in the AuIB conotoxin that affect the inhibition of α3β4 nAChRs [30]. Hence, its substitution with alanine disrupted a favorable interaction of AuIB with the receptor. It was elucidated that Pro 6 caused inhibition due to its effect on 3D structure of the peptide, whereas Phe 9 was responsible for the interaction with a two-residue binding pocket (Trp 59 and Lys 61) of the β4 subunit [30].

Structure– activity studies on the ViIA conotoxin revealed that Arg 1 and His 11 are critical residues for binding to the target effectively. (a mutant with additional Leu residue at position 16) produced a 12-fold stronger interaction with α3β2 nAChR when compared to the native peptide. This was explained by hydrophobicity Leu residue conferred to the overall structure of the ViIA conotoxin [31].

The VnIB conotoxin selectively inhibits However, no structure–activity studies on this conopeptide have been carried out so far. It is hypothesized that all of the members of α4/6 conotoxins, including VnIB, exhibit β4 subunit selectivity due to their common 4/6 substructure. The selectivity of VnIB toward α6-containing nAChRs can potentially be explained by the five residues present in the second disulfide-loop, excluding Pro residue (YTKNPN) [32].

Ala 11 and Gln 14 play a role in α3β2 selectivity of AnIB, whereas the C-terminal amidation and sulfation of Tyr 16 are responsible for α7 nAChR binding [34].

Important residues conferring EI potency to bind mouse α1β1δε nAChR were found to be His 7, In addition, deletion of Arg1–Asn2–Hyp3 residues are also crucial, since their deletion causes a total loss of activity at muscle receptors [36]. [S13A] EI mutant exhibited increased potency and selectivity for α1β1δε nAChRs [36].

GIC is a very interesting conotoxin from a research standpoint, since it exhibits extreme potency and selectivity towards α3β2 nAChRs (IC50 = 1.1 nM) [37]. His 5 and Gln 13 were found to be the most important residues that confer GIC its potency and selectivity, respectively. In addition, Ala 7, Asn 11, and Asn 12 residues of the peptide were involved in binding to the principal site of the receptor [37].

The structure–functional study conducted to the Lo1a conotoxin found that its Asp-18 residue is critical for the selectivity of the peptide for neuronal vs. muscle subtype nAChRs [39]. This was evident from the observation that Lo1a-ΔD and Lo1a-RRR analogues, which either lacked Asp 18 or had it replaced with 3 Arg residues, respectively, acquired affinity for the adult muscle subtype α1β1δε, aside from α7 receptors [39].

Ser-1 and Gly 2 are important residues for the affinity of LsIA to α3β2 and α7 nAChRs [40]. In addition, carboxylation of the C-terminus of LsIA resulted in its selectivity for α3β2 over α7 to increase 9-fold [40].

Selectivity of the Lt1.3 conotoxin for α3β2 receptors is attributed to a small hydrophobic Gly 10 residue, whereas Asn 11, Asn 12, Pro 13, Tyr 14, and Phe 15 residues contribute to the receptor binding [41].

Mr1.7 [E2A] is potent and selective for the α3β2 nAChR subtype, with no inhibitory effect on other subtypes [46]. However, the substitution of Ser 12 with Ala results in the loss of selectivity to α3β2, with new binding ability to other subtypes (α3β4, α2β4, and α7) [46].

Residues from Leu 5 to Pro 13 and Tyr 15 are important residues of PnIA, conferring its inhibitory effect on α7 nAChRs [50]. In addition, the PnIA [A10L] mutant is able to exclusively bind α7 nAChRs [51].

TxIB is unique due to its ability to selectively bind α6/ α3β2β3 nAChRs, while lacking any capability to bind to other receptor subtypes [53]. However, structure–functional studies accounting for this have not been conducted yet.

It is generally accepted that α-Ctxs are antagonists of nAChRs, but MrIC (PECCTHPACHVSNPELC), which is a peptide variant of Mr1.7, plays a full agonist role of endogenous human α7 nAChRs in the presence of PNU (positive allosteric modulator of α7 nAChR subtype) [54]. It is suggested that the Pro residue in the N-terminus of the peptide has a role in binding α7 nAChR [54].

Due to the fact that nAChRs are implicated in a range of pathological conditions, α-conotoxins targeting nAChRs pose themselves as attractive candidates for drug development For example, α-conotoxins RgIA and Vc1.1 demonstrate the analgesic effect in animal models of neuropathic pain [56][57][58][59][60][61][62][63]. Such analgesic effect works through targeting α9α10 The mechanism of analgesia mediated by RgIA and Vc1.1 conotoxins is not currently clear, but there are indications that it involves immune-mediated pathways.

RgIA was shown to be potent in reducing mechanical allodynia and oxaliplatin-induced hypersensitivity to thermal and mechanical stimuli [64], as well as accelerating the recovery of nerve damage following chronic constriction injury (CCI) [57]. Other than alleviating neuropathic pain, RgIA was also shown to be able to reduce the severity of dextran sodium sulfate-induced colitis in an animal model [65].

Vc1.1 was shown to reduce mechanical allodynia in rats with diabetic neuropathy induced by streptozotocin, and in rats with CCI [56][61]. Vc1.1 reduced mechanical hyperalgesia in rats with peripheral nerve ligation when the toxin was injected intramuscularly [62].

Another α-conotoxin with a potential therapeutic application due to its antitumor activity is TxID. The toxin inhibited the growth of lung cancer cells [66].

The results from in vitro and animal studies serve as an encouragement for drug development. There are, however, hindrances along the way [67], which stem from the peptidic nature of the toxins, the potential off-target effects, and different potencies on human receptors vs. rodent ones. For example, Vc1.1 was discontinued from phase II human clinical trials due to its low affinity on human α9α10 nAChRs [68]

The α-conotoxins mentioned in the main text are shown, together with their targets and potencies.