2. Mechanisms for the Development of Eosinophilic Airway Inflammation

Eosinophils accumulate at sites of allergic inflammation and play important roles in the pathogenesis of diseases, including EP, through the release of a variety of mediators, including specific granule proteins, such as major basic protein, cysteinyl leukotrienes (cysLTs), radical oxygen species, and cytokines [5]. Among them, IL-5 is a well-recognized cytokine associated with eosinophilic inflammation. The in vitro effects of IL-5 on eosinophils include the priming of the eosinophils and the enhancement of their survival [6]. Recently, the roles of IL-5 in the pathogenesis of eosinophilic diseases, such as eosinophil-dominant severe asthma and EGPA, have been established. In severe asthmatics with persistent blood or sputum eosinophilia, anti-IL-5 monoclonal antibody (mAb) treatment reduced both the blood eosinophil count and acute exacerbations [7][8][9]. In EGPA, anti-IL-5 mAb treatment resulted in a higher proportion of remission, thus allowing for the reduced use of glucocorticoid [10]. The concentration of IL-5 is increased in the BALF of EP patients, as described above. In this context, several case reports have suggested a positive effect for mepolizumab (anti-IL-5 mAb) on remission and the reduction of glucocorticoid use in CEP [11][12].
Eosinophils must adhere to and migrate across vascular endothelial cells to accumulate in airways [13][14]. These processes are mainly regulated by cytokines, especially IL-4/IL-13, or chemokines from a variety of cells, such as T helper (Th) 2 cells or group 2 innate lymphoid cells. The interaction between eosinophils and endothelial cells via the α4 integrins/vascular cell adhesion molecule (VCAM)-1 pathway is an important step for selective eosinophil recruitment [13][14]. IL-4 and IL-13 induce VCAM-1 expression on endothelial cells, and blood eosinophils spontaneously adhere to VCAM-1 [15][16]. This interaction between eosinophils and VCAM-1 induces superoxide anion (O2−) generation and the degranulation of eosinophils, and can be considered the initial step of eosinophil activation [13][14][15][16][17].
Eosinophil chemoattractants can induce the effective migration of eosinophils after adhesive interaction with endothelial adhesion molecules, such as VCAM-1 [13][14]. CC chemokines, especially CC chemokine receptor (CCR) 3 ligands, such as those regulated upon activation, normal T-expressed and secreted (RANTES; CCL5), eotaxin (CCL11), eotaxin-2 (CCL24), monocyte chemotactic protein (MCP)-3 (CCL7), and MCP-4 (CCL13), all effectively induce eosinophil transmigration across endothelial cells that express VCAM-1 [18]. Several studies have confirmed that CCR3 ligands are upregulated in the airways of bronchial asthma or EP patients [19][20][21][22]. Furthermore, the role of CCR5 and its ligands in the development of eosinophilic inflammation has been reported [23]. The concentration of macrophage inflammatory protein (MIP) 1β (CCL4), a CCR5 ligand, is increased in the BALF of EP patients [23].
Eosinophils can be activated and degranulated by cytokine/eosinophil growth factors, especially IL-5, IL-3, or granulocyte-macrophage colony-stimulating factor (GM-CSF), after migration across endothelial cells [6][13][14]. The important role of IL-5 in the development of eosinophilic inflammation has been established, as described above. GM-CSF also plays roles in eosinophil activation. For example, GM-CSF induces eosinophil O2− generation and degranulation in the presence of VCAM-1 or intercellular cell adhesion molecule 1 in vitro [16]. Furthermore, the airway eosinophils obtained after segmental allergen challenge in allergic subjects can be activated by GM-CSF, but not by IL-5, mainly because IL-5 receptor (R) α is downregulated [24][25].
Moreover, lipid mediators, such as leukotriene (LT) B4, cysLTs, and platelet-activating factor, may contribute to the accumulation of tissue eosinophils in the airways. As for cysLTs, LTE4 inhalation increases the accumulation of eosinophils [13][14]. LTD4 enhances the expression of β2 integrins on human eosinophils in vitro, and thus augments eosinophil adhesion [26]. Moreover, LTD4 directly induces transendothelial migration, respiratory burst, and degranulation, mainly via the cysLT1 receptor and β2 integrin [27]. These findings suggest that, in addition to the type 2 network, lipid mediators, including cysLTs, can induce eosinophilic infiltration and activation in the airways.

3. Role of CCR3 Ligands or CCR5 Ligands in the Eosinophil Accumulation in EP

The constitutive and/or inducible expression of CCR1, CCR3, CCR5, CXC chemokine receptor (CXCR) 1, CXCR2, CXCR3, and CXCR4 in human peripheral blood eosinophils has been reported [23][28][29][30]. However, proteomic studies of eosinophils found or described only CCR1, CCR3, and CXCR4 as being present on human blood eosinophils [31][32]. Although the reason for this discrepancy is unknown, it may be due to differences in the methods of receptor expression measurement or eosinophil purification, or the characteristics of the donors, and so on.
Among these receptors, CCR3 is highly and constitutively expressed on eosinophils. CCR3 ligands, such as eotaxin (CCL11), eotaxin-2 (CCL24), eotaxin-3 (CCL26), RANTES (CCL5), MCP-2 (CCL8), MCP-3 (CCL7), and MCP-4 (CCL13), can induce eosinophil recruitment in allergic inflammation [28]. Pretreatment of eosinophils with anti-CCR3 antibody diminishes their chemotactic response to CCR3 ligands in vitro [28]. Cellular sources of CC chemokines are likely epithelial cells, fibroblasts, and mononuclear cells [13][14][18][33]. Furthermore, Katoh et al. reported that the concentration of eotaxin was elevated in the BALF of EP patients [20]. Tateno et al. also reported that the concentration of eotaxin was increased in the BALF of CEP patients [21]. Therefore, CCR3 ligands, including eotaxin, may contribute to the pathogenesis of EP (Figure 1). 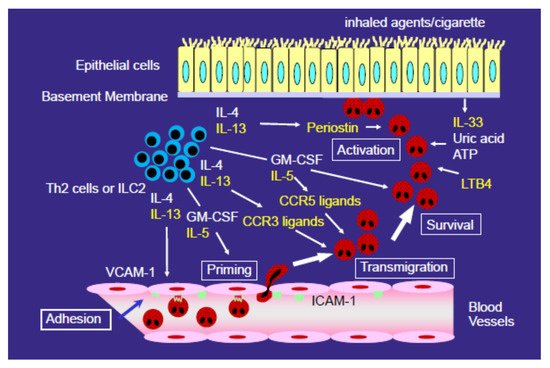 Figure 1. Possible mechanisms of eosinophil accumulation in the airway in eosinophilic pneumonia. Eosinophils must adhere to and migrate across vascular endothelial cells to accumulate in airways. vascular cell adhesion molecule (VCAM)-1 is an adhesion molecule expressed on endothelial cells, and it is specifically important for eosinophil adhesion. Cc chemokine receptor (CCR)3 ligands, including eotaxin-2 (CCL26) and MCP-4 (CCL13), and CCR5 ligands, including MIP-1β (CCL4), all play important roles in eosinophil migration. IL-4 and IL-13 are important for eosinophil accumulation, because they increase the expression of VCAM-1 and the expression of CCR3 ligands. IL-5 contributes to eosinophil accumulation by priming eosinophils and enhancing their survival. LTB4, damage-associated molecular pattern molecules (DAMPs), including IL-33, and extracellular matrix proteins, including periostin, have been found or suggested to play roles in the accumulation or activation of eosinophils. Periostin directly activates eosinophils and induces migration, and thereby plays a role in the accumulation of eosinophils in the airway. Yellow font indicates what we consider to be important mediators/molecules in the development of EP.
We found that BALF obtained from AEP or CEP patients induced the transmigration of eosinophils across endothelial cells [22]. This transmigration was blocked by anti-β2 integrin mAb. The concentrations of eotaxin-2 and MCP-4, which are CCR3 ligands, were increased in the BALF of EP patients, and anti-CCR3 mAb or anti-MCP-4 mAb suppressed the transmigration of eosinophils induced by the BALF of EP patients. Eotaxin-2 is a potent chemoattractant that binds with high affinity to CCR3 on eosinophils. The expression of eotaxin-2 is increased in airway epithelial cells from asthmatics, and is highest in cases of severe asthma [34]. MCP-4, which is mainly produced by epithelial cells and lymphocytes, is also a potent chemoattractant for eosinophils, and it induces a calcium flux in CCR3-positive cells [35]. Therefore, eotaxin-2 and MCP-4 may be important, specifically for the induction of eosinophil transendothelial migration in EP.
In addition to CCR3, the role of CCR5 in the development of eosinophilic inflammation has been highlighted (Figure 1) [23]. Similar to MIP-1α (CCL3) and MIP-1β (CCL4), RANTES, a CCR3 ligand, also functions as an eosinophil chemoattractant via CCR5 [36], although its expression was not confirmed in proteomic studies [31][32]. MIP-1β differs from the other chemokines in that it is a specific CCR5 ligand [37]. Kobayashi et al. reported that the concentration of the CCR5 ligand MIP-1β is elevated in the BALF of EP patients [23]. Eosinophils constitutively secrete MIP-1β, which induces eosinophil migration, and MIP-1β secretion is enhanced by IL-5 [23]. CCR5-deficient mice show decreased airway eosinophilic inflammation and hyperresponsiveness [38].

IL-4 and IL-13 contribute to eosinophil accumulation in the airway; however, the accumulation is thought to be induced by an indirect mechanism, as it is generally accepted that IL-4 and IL-13 with physiological concentration do not activate eosinophils directly. We also confirmed that IL-4 and IL-13 do not activate eosinophil functions, such as adhesion or O2− generation, in vitro in eosinophils obtained from the blood of healthy volunteers (unpublished data). In contrast, IL-4 and IL-13 induced VCAM-1 expression in endothelial cells and the production of CCR3 ligands from epithelial cells, fibroblasts, and mononuclear cells (Figure 1), as described above. The levels of IL-13 and, in some reports, IL-4 are increased in the BALF of EP patients [39][40][41][42]. Therefore, IL-4 and IL-13 play roles in the accumulation of eosinophils in the lung, not by directly activating eosinophils, but by inducing VCAM-1 expression in endothelial cells and CCR3 ligand expression.
In eosinophil-dominant severe asthma, anti-IL-4Rα mAb, which blocks both IL-4 and IL-13 signaling, strongly reduced acute exacerbations and increased lung function [43]. Furthermore, in severe chronic rhinosinusitis with nasal polyps, anti-IL-4Rα mAb reduced polyp sizes, sinus opacification, and the severity of symptoms [44]. Considering the role of IL-4/IL-13 in the development of eosinophilic airway inflammation, anti-IL-4/IL-13 treatment likely suppresses the accumulation of eosinophils in tissues in vivo, although it has not yet been established.