Nanoparticle-based drug delivery has demonstrated promising results for topical ophthalmic nanotherapies in the treatment of intraocular diseases. Studies have revealed that nanocarriers enhance the intraocular half-life and bioavailability of several therapies including proteins, peptides and genetic material. Amongst the array of nanoparticles available nowadays, lipid-based nanosystems have shown an increased efficiency and feasibility in topical formulations, making them an important target for constant and thorough research in both preclinical and clinical practice.

Delivery of drugs to the intraocular tissues is one of the main concerns both pharmacists and ophthalmologists face every day. Over the past several years, conventional topical ophthalmic formulations such as eye drops, suspensions and ointments have been widely used in ophthalmic therapeutics, but none of them have demonstrated the sufficient capacity to increase the bioavailability to intraocular tissues without increasing the drug toxicity [1]. Consequently, to date, the use of invasive interventions such as intravitreal injections or intraocular implants are the main strategies to deliver drugs into the eye [1][2].

As it is well-known, intravitreal injections are the prototype intervention for the treatment of retinal diseases. Recently, intraocular biodegradable implants and micro pumps have been developed in order to deliver drugs into the eye. Although excellent results have been achieved with these devices, they are expensive and required to be implanted through a surgical procedure, limiting their availability to the population. Additionally, along with the intravitreal injections, they are not exempt from complications such as strabismus, infection or a conjunctival erosion related to the presence of an external device and postoperative complications including endophthalmitis or worsening of the visual acuity [2]. Therefore, the challenge to deliver drugs into the eye with increased bioavailability to either segment, and with fewer adverse events, is still unsolved.

All limitations related to the ocular delivery routes arise from the premise of the enormous complexity of the eye’s anatomy including its anatomical and physiological barriers. Nevertheless, at present, nanotechnology has been part of a new era, where new technological advances have made possible the creation of different nanosystems capable of overcoming those barriers [3].

Nanotechnology is defined as the development of materials on a 1 to 100 nm scale [4]. The usage of nanotechnology in the biomedical field had led to the creation of a hybrid science named nanobiotechnology [5], and with it, new systems of drug delivery arose and became known as nanosystems which act as drug nanocarriers [3]. These drug nanocarriers provide new opportunities to decrease the limitations of the conventional drugs, such as solubility, metabolic degradation, increased dosing frequency or lack of viable drug targeting [6][7][8]. The nanocarriers are classified into three main groups: polymeric, non-polymeric and lipid-based nanocarriers, which in turn subdivide into more specific groups [8]. The polymeric nanocarrier classification includes four main branches: the nanomicelles, the polymeric nanoparticles, dendrimers and nanogels. On the other hand, two nanomolecules, gold nanoparticles and mesoporous silica, are included for the non-polymeric nanocarrier group. Finally, lipid-based nanocarriers refer to the different subgroups including the emulsion-based, vesicle-based and particulate systems [8][9].

Recently, lipid-based nanocarriers have emerged as promising nanosystems for intraocular drug delivery. For example, topical liposome-based nanosystems have demonstrated, in preclinical and early clinical studies, to be efficient to deliver triamcinolone acetonide (TA) into the vitreous and retina [10][11]. This technological advance in the ophthalmic pharmacology field represents the opportunity to treat multiple inflammatory and neovascular intraocular disorders avoiding or reducing the use of intravitreal injections. Although intravitreal injection of TA is a well-described and capable route to release this steroid into the posterior pole of the eye, this procedure is not exempt from potential severe complications such as endophthalmitis, lens injury and retinal detachment [1][12][13]. These menaces related to the intravitreal injection of TA, are avoided by the topical instillation of topical liposome-based nanosystems. Moreover, the topical application allows to immediately suspend the effect of steroids by suspending the application (hours) [14], while in the intravitreal application the effect is maintained for long periods until the clearance is achieved (months) [15]. Therefore, in cases of adverse effects related to TA, the control in intravitreal-injected patients is complex.

In another example, the usage of nanoemulsions containing dorzolamide hydrochloride topically administered has proved to increase the therapeutic effect along with rapid and sustained action, thus decreasing intraocular pressure and demonstrating their effectiveness on the field [16].

Lipids are water-insoluble, organic compounds chemically composed of molecules with polar hydrophilic heads and nonpolar hydrophobic tails. Although lipids usually present hydrophobic properties, the presence of lipids with amphipathic behavior has also been shown [17]. Currently, lipid qualities have been demonstrated by functioning as necessary vehicles in ocular drug delivery. These advantages are conceded by their specific properties regarding melting points, crystallinity and ability to be polymorphic.

Positive outcomes on the implementation of lipid-based nanocarriers include the formulation flexibility and design for administration, increase in bioavailability, solubility and permeation, benefit–risk scale inclined to an almost no-hazard result; and a more regulated release of the ocular drug [8].

Lipid-based nanosystems are divided into three main groups: emulsion-based, vesicle-based and particulate systems, which present their own composition and benefits in drug delivery systems [9].

Emulsions are used mainly in two forms, oil-in-water (Figure 1) or the other way around, where the former one is the best choice for the ocular tissues because of less mild adverse effects such as irritation. The main objective of these formulations is the increase of drug residence time in the precorneal area, as well as improving the permeation through the cornea to achieve a better bioavailability [1]. Liu et al. reported a comparison of azithromycin in aqueous solutions and lipid emulsions, where an increased conjunctival drug residence time, sustained release and an improved bioavailability were demonstrated by the emulsions [18]. 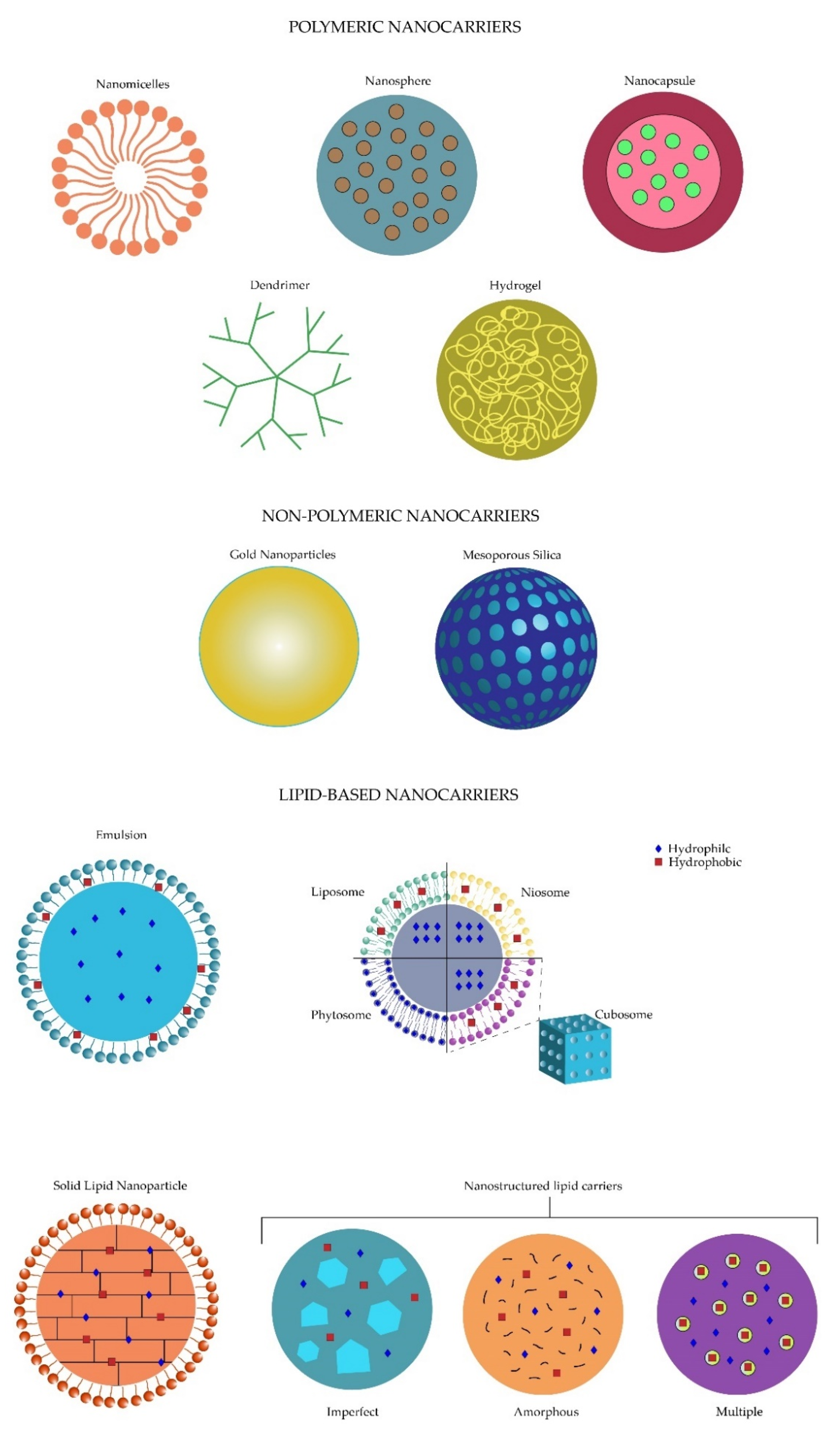 Another type of lipid-based nanosystem is the vesicle-based nanocarriers, including a wide variety of subgroups such as liposomes, niosomes, cubosomes and phytosomes/herbosomes mainly used for ocular tissues, pharmacosomes implemented for the gastrointestinal tract, ethosomes and archaeosomes for skin and systemic circulation, among many others [8]. Liposomes were first described in 1965 by Alec Bangham [19], but it was not until the early 1970s when Gregory Gregoriadis started researching drug delivery applications of liposomes [20]. The word liposome is derived from the Greek “lipo”, referring to their fatty content, and “soma”, referring to their structure [21].

Particulate systems are a third option involving lipid particles in their formulations. Solid lipid nanoparticles (SLNs) refer to delivery systems measuring from 50–1000 nm. They are composed of a lipidical nucleus combined with an amphiphilic surfactant for stabilization, where either a hydrophilic or hydrophobic drug can be transported [8][22][23]. At room temperature, the lipids conforming these structures, including steroids, mono, di and triglycerides, or fatty acids, are solid, and represent 0.1–30% of their composition, which are dispersed in an aqueous solution (Figure 1) [23][24]. Specific characteristics of the SLNs, which provide them with several advantages, include stability, an increase in drug load and controlled release, protection against chemical degradation, increased safety and non-toxic effects by using physiological lipids. Moreover, SLN’s easy preparation and low cost give the opportunity for high-scale production. SLNs improve ocular drug delivery by enhancing the corneal absorption with better bioavailability, lengthening the drug retention time and maintaining a sustained release [8][25][22][24]. Five drug-releasing methods have been described including desorption, diffusion either through the matrix of the nanoparticle or the wall of nanocapsules, erosion, or a combination of erosion and diffusion [26].

Lipid-based nanosystems have shown promising outcomes in relation to the actual challenges of ocular drug delivery, along with preserving the best care of the patients. To date, the main concern in ophthalmologic diseases falls back to the reduced bioavailability and an increased occurrence of adverse events. Furthermore, patient compliance due to the possible complications associated with non-topical routes of administration and economic solvency becomes an extra burden to overcome the different ocular diseases. As previously explained, topical ocular drug administration becomes the ideal non-invasive administration route due to the advantages offered, but still needs improvement regarding bioavailability. In our actual technologic decade, these problems have become more likely to be overcome with nanomedicine in our hands. Nanotechnology has given ophthalmologists and pharmacists the necessary tools to achieve these improvements using nanomolecules in order to increase ocular drug delivery with fewer adverse effects. Positive outcomes on the implementation of lipid-based nanocarriers have provided new opportunities to reduce the actual limitations including bioavailability, solubility, permeation, metabolic degradation, increased adverse effects and dosing frequency, or lack of viable drug targeting [6][7][8]. The increasing efficiency of lipid-based nanocarriers over the last years has made them a target for constant and thorough research. In fact, these formulations have been already used in both preclinical and clinical practice demonstrating favorable outcomes treating ocular diseases [10][11][16][27][28][29][30][31][32][33][34][35][36][37][38][39][40][41][42][43][44][45][46][47][48][49][50][51][52][53][54][55][56][57][58]. With all these promising results and taking advantage of the new technologies, researchers, pharmacists, and clinical professionals must continue this line of investigation and encourage the use of these new formulations in the near future in clinical medical practice.