Amniotic epithelial cells (AEC) have been proposed as promising candidates for regenerative medicine thanks to their multipotency, non-tumorigenicity, low-immunogenic profile as well as for their anti-inflammatory and immunomodulatory properties.

The advent of regenerative medicine has offered promising therapeutic options especially to cure degenerative, fibrotic and immune-mediated diseases identifying different stem cell typologies as potential source to develop stem cell–based approaches. After a long regenerative medicine history of amniotic membrane in wound healing[1], over the last few years, the attention was moved towards amniotic-derived cells as emerging candidates of stem cells source[1][2]. The embryonic origin of the amniotic-derived cells explains the evidence of their retained high plasticity, capable of differentiating into multiple cell types. Furthermore, placenta is fundamental for maintaining physiologically fetal-maternal tolerance during pregnancy [3][4] suggesting that the amnion cells simultaneously have low immunogenicity and immunomodulatory activities allowing to transplant them in immunocompetent organisms. Among amniotic-derived cells, amniotic epithelial cells (AEC) are most largely studied to date. These cells are able to secrete soluble factors, such as cytokines and growth factors with antiapoptotic, proangiogenic, anti-inflammatory and immune-regulatory molecules [5][6] that may aid tissue repair by enhancing immune-mediated pro-regenerative mechanisms that appeared to be highly conserved and able to overcome interspecies barriers[6][7]. The biological and regenerative properties of AEC, comparable among mammals, make them attractive candidates for therapeutic approaches in allo- or xeno-transplantation in different domestic animal models[8]. Indeed, several evidences obtained on preclinical and clinical settings have clarified that similar tissue regenerative responses and mechanisms are retained even if using AEC obtained from different species[8][6].

In light of these evidences, the exploitation of AEC’s immunomodulatory and anti-inflammatory properties, assumes a fundamental therapeutic impact, opening the need to improve knowledge on the molecular players of the immunomodulation for safeguarding or recovering tissue homeostasis. In this context, recently the endocannabinoid system (ECS) has been identified as a key player in immune-mesenchymal stem cells dialogue[9] while no information is available to date on AEC. Greco et al (2020) have filled this gap by demonstrating that ovine AEC express and modulate the main ECS components during pregnancy. Physiologically, interleukins and ECS expressions are modulated at different stages of gestation. During the early and middle stages of pregnancy AEC displayed a degradative more than a synthetic endocannabinoid metabolism. In particular, at the early stage of gestation AEC showed a very low expression profile of ECS genes, whereas starting from the middle stage of pregnancy, there was an up-regulation of the expression of degradation 2-AG enzyme (MAGL), CB type 1 (CB1)- CB type 2 (CB2) and TPRV1 receptors which was followed by an increased CB1 and CB2 binding activity. Instead, in the late gestational stage, AEC modified their ECS profile by acquiring a significant upregulation of NAPE-PLD the enzyme responsible for anandamide (AEA) synthesis. This latter ECS profile may contribute to the major concentration of endocannabinoids (EC) in late pregnancy, according to the literature data where ECS has been reported as a key regulator of the final event of pregnancy. The modulation of the enzyme activators allowed to analyze the role of the ECS and to demonstrate that ECS is involved in controlling the pro-inflammatory (IL-12) and anti-inflammatory (IL-4 and 10) interleukins release at the middle stage of gestation. Indeed, the basal release of the interleukins is in favor of the anti-inflammatory ones which remain as the prevalent interleukins, even after stimulation with LPS. Conversely, ECS activation mediated by the stimulation of CB1 and CB2 induced an overall pro-inflammatory shift. While CB1 induced a reduction of anti-inflammatory interleukin profile, on the contrary CB2 is responsible for the pro-inflammatory response. Importantly, this ECS action is operating both under constitutive and LPS-induced conditions (Figure 1).

The understanding of the ECS modulation in AEC increases the information on the mechanisms that regulate the immunomodulatory potential of AEC that may be exploited either to control pregnancy or to develop immune-targeted AEC-based protocols. 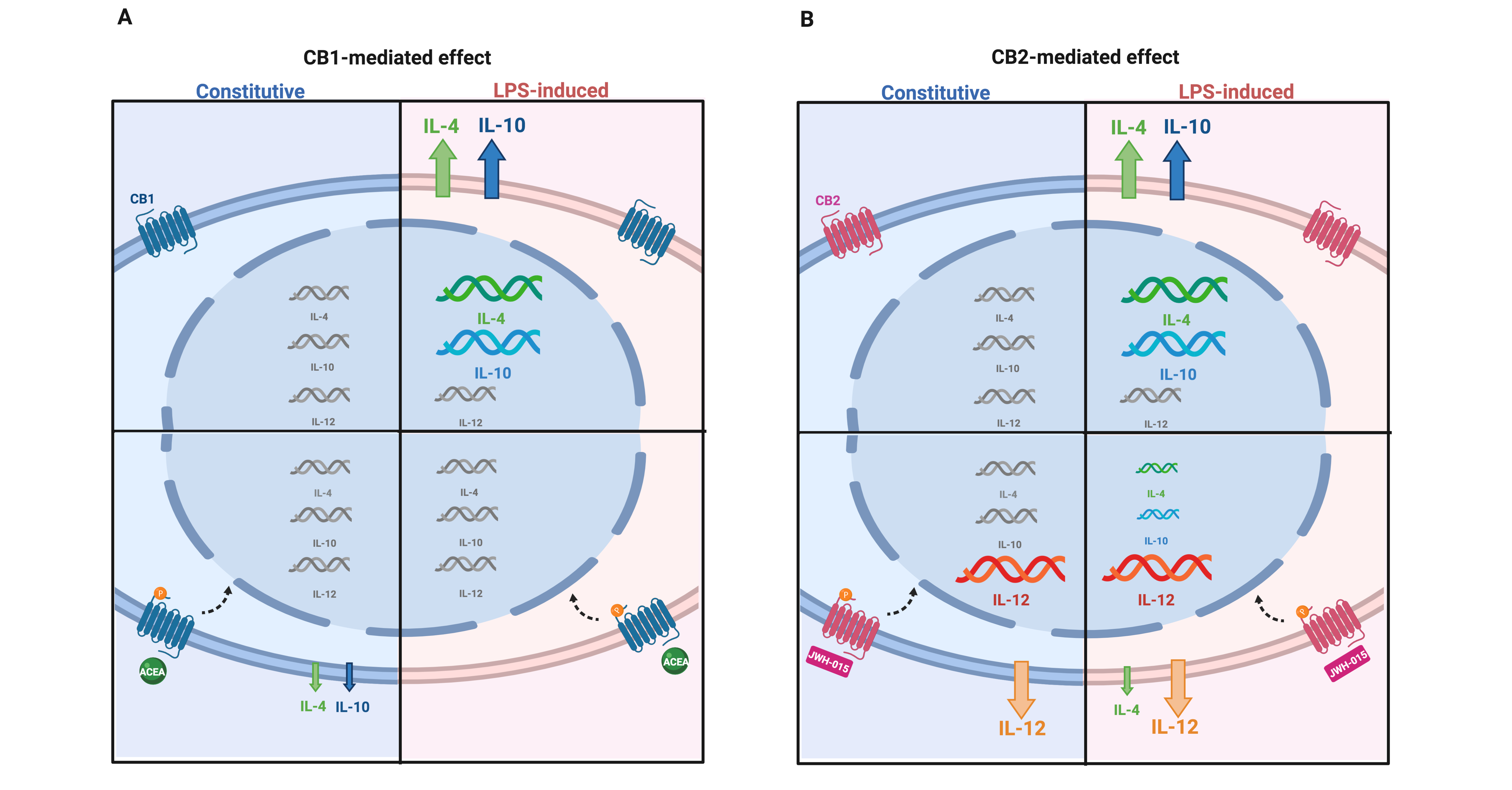 Figure 1. ECS-dependent interleukin release in AEC under constitutive and LPS-induced conditions. The picture summarizes the modulatory effect of ECS on pro- and anti-inflammatory interleukin expression and releasing profiles in the middle stage of gestation. The modulation of interleukin gene expression is indicated by means of different acid nucleic sizes. Changes in quantity of released/secreted interleukin proteins is indicated by different arrow sizes (upregulation and downregulation). (A) CB1 activation by agonist ACEA; (B) CB2 activation by agonist JWH-015 in the constitutive (blue panel) and LPS-induced (pink panel) conditions.

The present findings pave the way to the comprehension of ECS regulating pregnancy by clarifying new amnion mechanisms involved in fetal-maternal cross-talk. For the first time, evidences demonstrate that the epithelial layer of amnion may play a role in controlling the favorable reproductive endocannabinoids tone by modulating enzymes controlling the levels of 2-AG and AEA, the most biologically active EC required for successful implantation and labor. Amnion generates the favorable microenvironment to preserve AEC constitutive anti-inflammatory interleukin releasing profile by contributing to maintain the steady local low levels of ECS over almost the whole duration of pregnancy. This is crucial either for the success of pregnancy or to attenuate the cytotoxic pro-inflammatory cytokines release inducible by acute inflammation, which can irreversibly jeopardize the continuity of gestation[3][10]. Conversely, at the end of pregnancy amnion becomes ready to contribute to the dramatic up-regulation of pro-inflammatory cytokines (e.g. IL-12) triggering labor[11] by taking advantage of AEC pro-inflammatory expression profile shift and of the high endocannabinoid level activation.  Altogether the present results point on new amnion-ECS mediated mechanisms controlling reproductive outcomes.At the same time, these AEC mechanism insights are essential for the development of endocannabinoid-based approaches to target stem cells modulation of the immune system.The AEC immunosuppressive activities have been exploited to potentiate cell- and cell-free-based AEC regenerative protocols in the treatment of inflammatory disorders of different tissues such as liver, lung, tendinopathies, autoimmune encephalo-myelitis, traumatic brain injury and cardiac ischemia[12]. Likewise, the peculiar constitutive modality of AEC to tune immunosuppression have a relevant impact on chronic disease when the pathology progress in the absence of large inflammatory stimuli. Of note, for the first time it was demonstrated that immune-modulatory function of AEC is under the control of ECS which activation reverts AEC profile from immuno-suppressive to pro-inflammatory. This may have new clinical implication in diseases, such as cancer, where the stimulation of immune system has been proposed as an efficient therapeutic strategy[13]. Even if these mechanisms remain to be confirmed on human AEC, ovine represents a model of high translational value either from a reproductive medicine (mono-ovulatory medium sized mammal species) or from a regenerative medicine point of view by considering the recognized role in AEC-based preclinical settings.